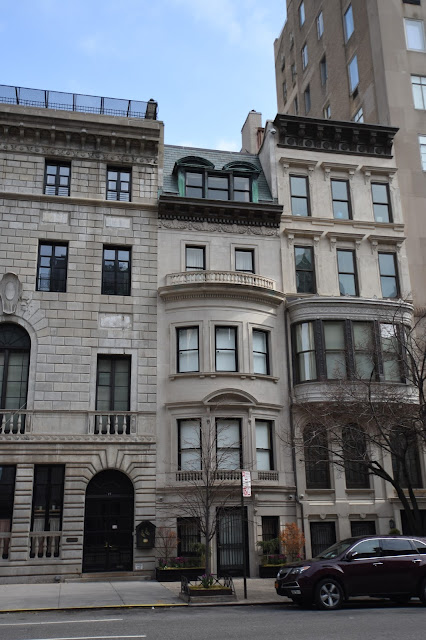 Among the row was No. 17, which the Real Estate Record reported on October 22, 1881 was sold “to Mrs. McCullom for $41,000.”  The journal got the buyer’s name slightly wrong—it was Robert Kennedy McCullough who paid the equivalent of more than $980,000 in today’s dollars.  As was the tendency, the title of the house was put in Mrs. McCullough’s name.

Most wealthy New Yorkers spent their summers at country estates or fashionable resorts.  But a few, like the McCulloughs, maintained European residences.  Theirs was in France, prompting society directories to list their addresses as “New York and Paris.”  The arrangement made Robert’s commute from the office to the summer residence less frequent; while the female McCulloughs whiled away the warm months abroad.  On June 21 1894, for instance, The New York Times reported “Mrs. Robert Kennedy McCullough and her daughter, Miss Isabelle McCullough, of 17 East Seventy-ninth Street, who sailed for Europe on the steamship Paris on June 6, will not return to this country until October.”

While the McCullough women were sailing off to Paris that year, young John Ross Delafield was studying law at Princeton.  The third son of Maturin Livingston Delafield and the former Mary Coleman Livingston, he was born in the family’s New York City mansion “Fieldston” on May 8, 1874.  After receiving his Bachelor's and Master’s degrees from Princeton, he graduated from Harvard Law School in 1899.

On June 14, 1904 Delafield married Violetta Susan Elizabeth White in the Church of the Heavenly Rest.  His bride, who was born in Florence, Italy in 1875, was the daughter of John Jay White and Louise Lawrence Wetmore White.  That same year he started construction on a country home, appropriately named Fieldston, in Riverdale-on-Hudson, New York.

That project accomplished, there was now the matter of a city home.  On March 23, 1907 the Record and Guide noted that Delafield intended to do “$25,000 worth of improvements to the 4-sty dwelling 17 East 79th St.”  Architect Francis G. Stewart had already been commissioned to draw the plans which originally called for “new plumbing, rear extension, and interior changes.”

In fact, the alterations would go much farther—completely remodeling the old brownstone into a modern, neo-Classic style American basement mansion.   When the renovations were completed, there was no hint of the former McCullough brownstone.  Faced in gleaming white limestone, its first three floors bowed out, creating a balustrade balcony at the fourth floor.  An especially pleasing frieze of carved garlands ran below the cornice, above which the mansard roof was fronted by copper-framed dormers.  Inside were fifteen rooms and five bathrooms.

By the time the Delafields moved into their new home, their first son, John White Ross Delafield, was already two years old.  On January 9, 1909, their second child, Richard Montgomery Delafield, was born.  In 1913 Genealogies of the State of New York pointed out that Fieldston “remains his residence, but he occupies his town house, No. 17 East Seventy-ninth street, during the winter months.”

John Ross Delafield was an imposing figure.  Geneaologist Tunis Garrett Bergen described him, writing “He is about six feet and five inches in height, weights about two hundred pounds, and has dark brown hair and eyes.”

The Delafield boys were too young for military service when America entered World War I; but their father was not.   During the war he was Chairman of the Board of Contract Adjustment of the War Department and was awarded the Distinguished Service Medal.   He rose to the rank of Brigadier-General.  After the war, as reported in the Princeton Alumni Weekly on March 19, 1924, “he interested himself in the industrial preparedness of the country and his intimate knowledge of this subject, as well as the general subject of service of supply of the army, has prompted the War Department to use this qualification of one of its most efficient officers on several occasions.”

Delafield was highly active “in the preparation for national defense,” and spoke throughout the nation on the subject and appeared before the Congressional subcommittee on War Department Appropriations.  On January 25, 1924 the French Government conferred the Legion of Honor Cross on him for his ongoing work.

Richard Delafield graduated from Princeton in 1930 and was married to Margaret Durbin Gade in a fashionable St. Bartholomew’s Church ceremony on December 29 that same year.  An attorney like his father, he would become Assistant United States Attorney.  Despite the ongoing Great Depression, the wedding hinted that Delafield family was suffering little.

John was interested in farming as a hobby and the orchard upstate produced about 16,000 bushels of apples each year.  An outdoorsman, he went on hunting trips to the Northwest.   Violetta had her own interests, as well.  The Princeton Alumni Weekly noted “As a young woman she traveled widely in Europe.  She spoke several languages and was a student of botany, particularly that branch of the science which deals with fungi.”  She maintained greenhouses at the country estate where she propagated succulents and orchids.

But in 1935 Delafield's focus turned closer to home—a proposed motion picture theater at the eastern end of the block at Madison Avenue and 79th Street.

Residents of the block retained attorney Nathaniel Phillips to represent them in court.  The lawyer told Justice John F. Crew that a commercial project like this would be “an opening wedge” for other developers.  John Ross Delafield filed an affidavit saying that he “has been a resident of the neighborhood for twenty-five years, during which time its character has improved but is now being threatened by the proposed movie house.”  He added that it would depreciate the property values of the upscale homes on the block.

The Delafield boys who had been too young for service in World War I followed their father’s footsteps when the country was pulled into the Second World War.  On November 24, 1944 the Princeton Alumni Weekly reported “John Delafield…has two sons in the service, one, Maj. John White Delafeld ’27, now somewhere beyond the continental limits of the U.S.; and the other, Lt. Richard Delafield, an air combat intelligence officer on duty in the South Pacific.”

John and Violetta did their part from home.  The Weekly said that John “in fact is the ‘spark plug’ of ‘Bundles for America Inc.,’ which is rendering a great service in furnishing clothing and various comforts for service men and their families.”

By now Richard and Margaret had six children.  His service overseas was remarkable, The New York Times reporting that he was “cited for his services as air combat intelligence officer during the period of the expulsion of the Japanese from the Aleutian Islands.”   But on March 14, 1945 John and Violetta received heart-breaking news.  The following day The Times reported “Lieut. Richard Delafield, USNR, has been killed in action, according to word received by his parents, Brig. Gen. and Mrs. John Ross Delafield.”

Violetta had already begun suffering from emphysema and Richard’s death no doubt increased her stress and medical frailty.    She died in the 79th Street house on May 1, 1949.   John donated her collection of plants to the New York Botanical Gardens.

For a few years he remained in the house that he and Violetta had so drastically remodeled four decades earlier.  On February 15, 1951 John White Delafield was married to Anita Renee Reilly in a Plaza Hotel ceremony.  Three years later John Ross Delafield sold the house to real estate operator Fred H. Hill.   On April 29, 1954 The New York Times announced his plans to alter it “into doctor’s offices and two duplex apartments.”

Throughout the next few decades the converted mansion was home to celebrated residents like Broadway producer Leonard Sillman (according to Steven Suskin in his Broadway Yearbook 2000-2001, the living room of Roger Debris in The Producers was based on Sillman’s residence here); and famed portrait artist Rene Robert Bouche.  He was living here when he died of a heart attack at the age of 57 in 1963.

Then, in 1986, Michael Bloomberg purchased the house for $3.5 million and re-converted it to a single family home.  He commissioned decorator Jamie Drake to renovate the interiors—installing an Adams-style plaster ceiling in the bedroom, for instance.  The foyer was paved with a rare Egyptian marble and, according to Allen Salkin, writing in New York magazine, “Artworks include a sketch by Fragonard, hunting-dog oil paintings, and black stone busts.”  When elected Mayor, Bloomberg preferred to stay in the East 79th Street house as opposed to Gracie Mansion.

Although the residence contained what The Times, on February 24, 2009, called “7,500 square feet of exquisite living space,” the newspaper said Bloomberg felt, “it seems, the house has been a bit cramped.”  He had been quietly buying up apartments in the house next door at No. 19 (also one of D. & J. Jardine’s original row) for years.  Now he broke through, combining certain rooms of the two mansions, like the dining room.

Michael M. Grynbaum, writing in The New York Times, said “The additions have made his home far roomier, giving him an estimated 12,500 square feet of living space; it would probably fetch more than $30 million.”

Bloomberg has still not acquired all of No. 19; but neighbors suggest it is only a matter of time.  In the meantime the handsome exterior of the Delafield mansion has been lovingly preserved.