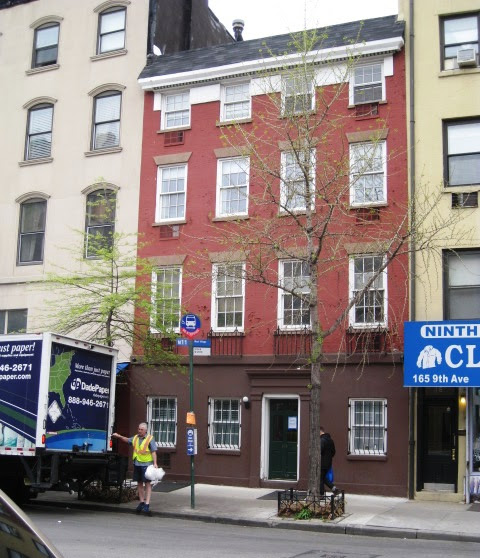 He traveled to New York City to find his fortune.  By the time the 23-year old married in 1815 his dry goods business on Pearl Street was a success.  He moved to Greenwich Village, where he eventually became acquainted with Clement Clarke Moore and real estate operator James N. Wells.

Don Alonzo Cushman recognized Chelsea as an up-and-coming neighborhood.  In 1833 he bought property on Ninth Avenue between 20th and 21st Streets and constructed a commodious home for his family within a spacious garden.   After helping found the Greenwich Savings Bank, he gave up his dry goods business altogether and focused on real estate and banking.  In 1839 he began his most memorable project—the string of elegant Greek Revival homes on West 20th Street between Ninth and Tenth Avenues that would become known as Cushman Row.

Cushman embarked on a less ambitious project four years later when he erected the double store-and-residential building at Nos. 161-163 Ninth Avenue, between 19th and 20th Streets.  Each shop owner and his family would live above his store in the three-story, two-bay wide residential space.  The relatively-new Greek Revival style had done away with the peaked roof and dormers of the Federal style, providing a full-height attic floor.

As early as 1852 Samuel P. Armstrong lived in No. 163.  A house painter, he ran his business, Armstrong & Vanbramer, from the shop.   Starting around 1855 it was also used as the neighborhood polling place each year.  In 1865 the polling spot was identified as the “furniture-store” at No. 163; referring to Martin Furey’s cabinet making business which had taken over the space.

By the 1870s both addresses had become multi-family homes.  In 1876 Elizabeth Fraser lived upstairs in No. 161 and ran her “variety” store in the shop.  City directories listed her as “widow of John.”  Also living in No. 161 was David C. Munson, a carpenter; Charles H. Putnam, a “truckman;” and Edward Adams who earned his living as a clerk.

Next door, by 1872, Samuel Hanna had established his neighborhood bakery in No. 163.  Among the residents upstairs were Janet Bowden, “widow of Thomas,” and her son, Thomas E. Bowden.  By 1876 William Knapp, who moved in upstairs, had taken over Samuel Hanna’s bakery business.  He appears to have had only one employee in the tiny bakery, George A. Bellows.  By now Thomas Bowden had secured a job, listing himself in directories as “segarmaker.”

A recent arrival in New York City was Samuel Bath Thomas, who arrived in 1874.  Along with his personal effects, he brought his most valuable possession—a muffin recipe.   Thomas’s muffin was totally unlike anything Americans were accustomed to and it would lead to his fortune in his new country.

In 1880 Thomas took over the bakery at No. 163 from George Knapp.  He sold only to commercial establishments, advertising delivery “to hotels and restaurants by pushcart.”  Before long Thomas’s English muffins were a tremendous success, prompting Thomas to open a branch bakery around the corner at No. 337 West20th Street.

Working in Samuel Thomas’s small, hot bakery may not have been the best of jobs.  In 1900 a State inspection listed three male employees at No. 163, each working an average of 72 hours per week.

By now the store at No. 161 was home to M. Voight & Sons, “bellhangers,” who nebulously described their work as “electric work, bell hanging, etc.”

In the crowded rooms upstairs in No. 161 in 1903 lived 44-year old Mary Herrol her husband and their six children.  When Mary learned she had an incurable disease in January that year, she became depressed.  On Saturday night, January 31, she slashed her throat with a table knife.  She died in Roosevelt Hospital the following Tuesday.

More than a little excitement occurred at No. 161 in 1910.  The Chelsea neighborhood had been plagued for weeks by what newspapers dubbed the “dumbwaiter burglars.”  Early on the morning of November 9 three detectives from the 20th Street Station House followed three suspicious characters who disappeared into No. 161.

Ironically, the rooms they broke into belonged to Patrolman Henry Bauersmith and his wife and family, who were away.  The thieves, Joseph Carroll, James Edwards and Joseph Franks, headed out of the apartment after about 20 minutes, “carrying a suit case that seemed to be heavy,” according to The New York Times the following day.

The New-York Tribune reported “When told to throw up their hands by Detectives Young and Brown, the burglars fired six shots in reply.  The noise brought Patrolman Callahan and Dwyer…and the burglars were overpowered and arrested.”  The thugs were later tied not only to a string of burglaries, but to a recent murder.

Twelve years later another notorious burglar would not be ransacking No. 161; but living there.    John Haughey had a record of 13 arrests and prior burglary convictions in 1922.  The Evening World said “He has been placed on probation twice, twice has received suspended sentences, one for violation of parole, and has been tried for homicide and discharged.”

In January that year Haughey was wanted on charges of assault and robbery, after he and two cohorts beat and robbed jeweler Charles Niehauser on January 4 in his West 83rd Street shop.  On January 9 he proved that he was not only dangerous, but stupid.

That day one of the gang’s followers was on trial for burglary in Brooklyn County Court.  John Haughery and his two accomplices showed up in court to watch the trial.  They left the courtroom in handcuffs.

1922 was a much happier year for Edward A. Wilson, who also lived at No. 161.  When he entered a contest in The Evening World in October, he won the “Special Prize”—a new Ford motorcar.  (It was a much grander prize than the next place prize of $25.)

In the 1960s Nos. 161-163 were given a make-over that replaced the 19th century storefronts with blank walls during a conversion to apartments.  The misguided owners made alterations which drew enraged comments from the Landmarks Preservation Commission in 1970.  “Expert guidance could have aided the owner in producing a more appropriate design than that which combines a pseudo-mansard roof with splayed Georgian lintels and a Mediterranean style entrance door.”

Later owners may have read that blistering critique.  The entrance gained a reproduction Greek Revival enframement which, while it would be more appropriate in a high-stooped row house, is at least a sympathetic effort. 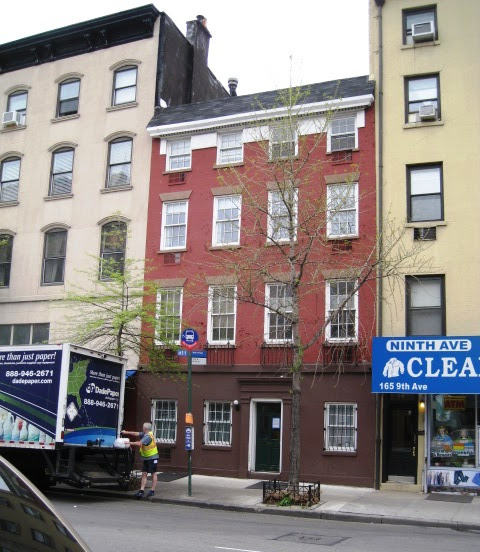 In the meantime, that the little building which introduced Americans to the English muffin survives at all after nearly 175 years on bustling Ninth Avenue is amazing.