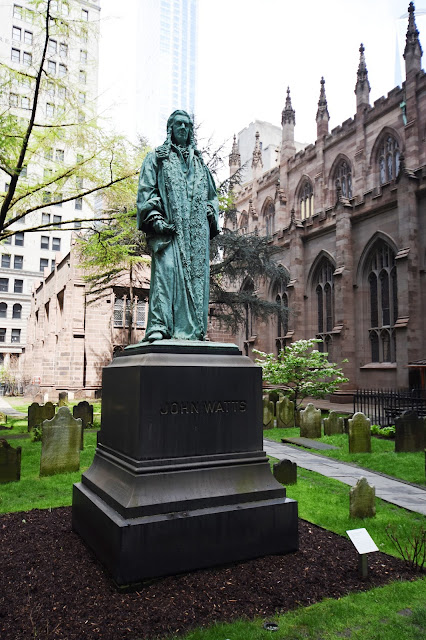 Born on August 27, 1749, John Watts, Jr. could not possibly have had a more enviable pedigree.   His father was the wealthy Scottish-born John Watts who had married Anne DeLancey, a daughter of one of the most powerful colonial families in New York.  John Jr.'s grandparents were from the Schuyler and Van Cortlandt families.

As John Watts, Sr. served in the colonial government—a member of the Colonial Assembly and the King’s Council—young John grew up in luxury and privilege.  The Watts country estate, Rose Hill, had been the DeLancey country home.  It covered more than 130 acres from the East River to what would become Fourth Avenue, from 21st to about 30th Streets.

John Watts, Jr. was graduated from King’s College in May, 1769, giving the valedictory address at the age of 19.  Within a few years he was appointed Royal Recorder of New York.  Although a clerical post, it was nonetheless impressive.  Watts was responsible for various administrative responsibilities, like assisting the Mayor; as well as judicial functions.

As the clouds of rebellion formed, it would appear that a rift grew between Watts and his father.  An ardent Tory, John Watts, Sr. fled to England in 1779 following increasing threats from rebels and after being “attainted with treason” by the New York State Legislature. That same year the Governor appointed Commissioners of Forfeitures to “dispose of the confiscated estates” of Loyalists.  Rose Hill and the Watts lower Manhattan townhouse were seized and auctioned in 1784.

The very fact that John Watts, Jr. and his brother Robert were allowed to re-purchase the family homes strongly suggests that the men were patriots.  Not long after his parents had left the country, John Watts, Jr. reinforced the Watts-DeLancey alliance by marrying Jane DeLancey.  They would eventually have 11 children and took possession of Rose Hill.

Watts was the only former British official in New York who went on to hold American office.  In 1791 he was elected to the New York State Assembly; and two years later to the United States Congress.  But despite his great wealth and political standing, Watts suffered personal pain.  One by one he buried his wife and 10 of his children.

John Watts had been a life-long friend of John George Leake, who married Watts’s younger sister, Margaret.  When their only son, John George, died at the age of eight in 1793, Leake formulated a plan to carry on his name.  He proposed to leave Watts’s only surviving son, Robert, his vast fortune--with one caveat.  Robert would have to change his surname to Leake.  Against his father’s vocal opposition, Robert did so.

When Leake died in his mansion at No. 32 Park Row on June 2, 1827, Robert inherited his uncle’s estate.   The strain it caused between him and his father is evidenced in Watts’s grandson’s writing later “John Watts was opposed to his son’s acceptance of the terms of the will, and Robert refrained from speaking of the matter.”  Ironically, shortly after the will was settled, “Robert Watts died of congestion of the lungs, following a severe cold contracted during a game of ball."    Biographer Frank Allaben in his 1908 John Watts De Peyster explained, "He left no will and died unmarried, his father becoming his heir."   It was the embodiment of cruel irony.

Already wealthy, John Watts had no need for the Leake fortune.  Concerned with social conditions (he was a founder of the New-York Dispensary and became its president in 1827), he used the Leake estate to found the Leake and Watts Orphan House in the City of New York on March 7, 1831.  He turned over his beloved Rose Hill to the institution.  It was among the first of the charitable organizations for child welfare in America.

John Watts, Jr. died in 1836.  By the last decade of the 19th century his Leake and Watts Orphan House had moved twice as the city continued to move northward, engulfing the former open countryside.  When, in 1890, plans were laid to move the orphanage out of Manhattan, to Yonkers, Watts’s grandson General John Watts DePeyster, was concerned that Watts’s memory among New Yorkers would fade into oblivion.

His solution was to commission sculptor George E. Bissell to design a “heroic size” bronze statue.  On July 22, 1892 The Sun reported that the finished sculpture had been shown at the Henry-Bonnard bronze foundry on West 16th Street the day before.   The article noted that the foundry had worked on the statue for nine months; saying it “is nine feet high, and weighs 3,250 pounds.”  The Sun added ‘it is considered to be a good piece of work.”

DePeyster had provided Bissell with a bust of Watts, sculpted from life by Ball Hughes, to use as a model.  The completed statue would be mounted on a six-foot high granite pedestal inscribed with Watts’s name on the front.   Earlier The New York Times had described the figure saying “The statue represents Judge Watts costumed in ermine-bordered robes and wearing a wig, as he appeared in 1775.”

DePeyster agreed to have the monument erected in Trinity churchyard, where his grandfather had been buried, although, according to The Times, his “first desire was to have it placed in Central Park.”

As the unveiling neared, The Times gave a more detailed description on July 22, 1892.  “The cloak is not only heavily furred, but has big sleeves and falls in a hundred solid folds, while the curly wig descends majestically on his shoulders.  The handsome stern features carry off all this bewigging and begowning very well…The Judge’s left hand is resting against his waist, his right hand hangs down and holds a scroll, while his right foot emerges from the long folds of his gown.”

The article was perhaps the first to credit the statue as being Bissell’s greatest work.  “In fact, it is probable that Mr. Bissell has hit on his very best statue in this instance.”  It was an opinion that would be repeated for years.   In 1910 The New Century Book of Facts called it “The best work this sculptor did.” And on August 31 1920, following the death of George Edwin Bissell, the New York Herald wrote “What is considered by art critics as his masterpiece, a statue of Chancellor John Watts, stands in Trinity Church yard.” 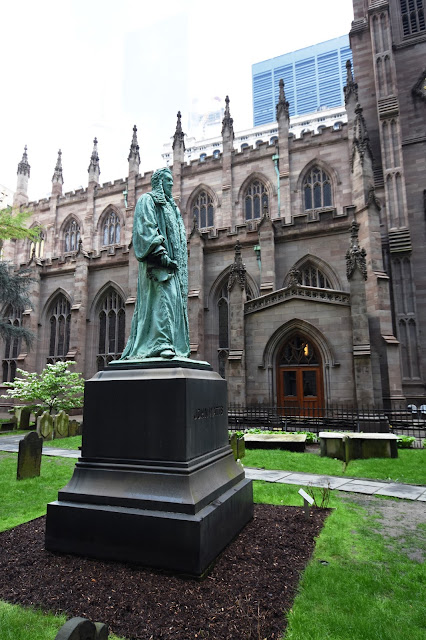 The powerful statue of John Watts, now having gained the pleasant green patina of age, still stands in the churchyard among the graves of much more familiar names like Robert Fulton and Alexander Hamilton.  His charity still operates under the name Leake and Watts Services, Inc.  But despite his grandson’s valiant attempts to keep his memory alive, John Watts, Jr. is largely forgotten and his bewigged, robed figure a mere curiosity to the tourists who file by.