Humor Amidst Desperation -- No. 787 Ninth Avenue 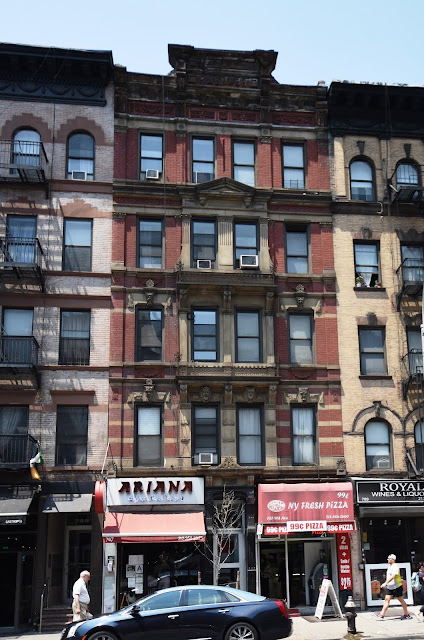 On November 10, 1879 the New York Herald gave its readers an idea of what life in the notorious Hell’s Kitchen neighborhood was like.  “The tenement houses and rookeries in this section are like seething caldrons of vice and brutality, and the filthiness and slime of the passageways and alleys in these human hives are in emblematic keeping with the moral dirtiness and corruption of their inmates.”

The article lamented “It is a painful fact that in this part of the city little children are actually sent out to steal when they are scarcely able to walk.  They are trained and educated in sin by harsh and brutal parents, and driven into the streets to sin when they have scarcely received a mother’s caress.”  It described the best of the living conditions as “four and five story tenement houses, with small rooms and narrow and winding passageways.”

Among these was the Werner tenement, at No. 787 Ninth Avenue.   Until 1871 a small building had fronted Ninth Avenue on the site.  To the side a horsewalk (a narrow path between buildings) most likely provided access to the brick back building.  When Frank Werner demolished the the front structure, he left the old building in the back standing.

Anyone passing by the completed building would not make the same mistake.  The overblown pressed metal cornice with parapet loudly announced F. WERNER.  Despite the gritty surroundings, Werner did not scrimp on materials.  The red brick façade was trimmed in sandstone and ornamented with terra cotta and cast iron.

The most eye-catching of the details, however, were the carved faces that formed the lintel keystones.  The stone carvers let loose their creative humor to produced whimsical characters that may have briefly lightened the difficult lives of the residents and neighbors.  The mouth of one is agape--laughing, singing or, perhaps, screaming.  Another sticks his tongue out at passersby; and one, with a haughty expression, seems to roll his eyes in exasperation.
As expected, the Werner filled with working class tenants.  Among the first were Ernest Emden, a miller; Clement Erlinger, coachmaker; and Frederick Bilstein, a bricklayer. It may be that Werner kept the back building for his own family.  Werners are listed at this address at least until 1888 when Charles Werner, a fireman, was injured in a deadly fire in the Five Points neighborhood.

Another early tenant was not so hard-working.  Joseph Roberts ran his “policy shop” from his apartment.  Policy games were illegal lotteries, later known as the number racket.  The games preyed on low-income persons who dreamed of quick riches.

On January 16, 1874 the New York Herald reported “Thomas Murray ventured the sum of ten cents on the numbers 5, 14 and 47 in that establishment, but was unfortunate.  So also was Roberts, who was arrested by Officer Dolan and moleted in the sum of $100, for the benefit of the city treasury.”

On either side of the centered entrance were retail stores.  Peter Feinholz ran one, described in the 1872 city directory as “milk, candy, varieties.”  On the other side was the “segar” store of Francis Winter and his wife, Eva.  They not only sold, but manufactured the cigars here at least through 1877.  Feinholz’s variety store, too, would be in the building that long.

Through the 1870s the tenant list reflected a high proportion of German immigrants with names like Kirchner, Schmidt, Donfelser, Kaltenbacher and Grunig.  Their occupations suggest that they were mostly hard working men, simply trying to make a living.  Among their professions were grinder, upholsterer, baker and tailor.

One family, at least, was doing its best to elevate their son from the miserable environment.  In 1884 Hermann Diedrich Lange enrolled in law school.  It was no doubt a tremendous financial strain on the family.

But respectable professions could not change the hard-nosed, street-wise character of many residents.  John McNeil worked as a longshoreman in the first years of the 1890s.  On Saturday night, February 18, 1893 he attended a birthday party at the apartment of another longshoreman, Frank Clark.

At some point McNeil and Garret Addis argued.  They left the apartment to fight outdoors.  The New York Times reported two days later, “McNeil went to Bellevue with a cut over his eye and a compound fracture of the skull.  He is likely to die.  Addis and everybody at the party were arrested.”  The entire group was taken to Bellevue to form an impromptu line-up, from which the dying McNeil identified Addis. 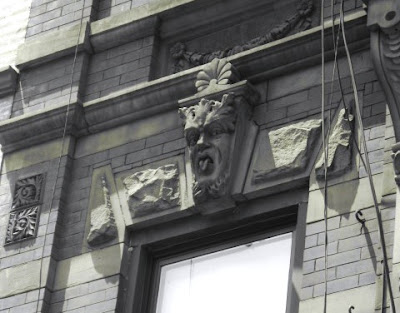 The following year New York was plagued by a deadly small pox epidemic.  The disease especially raged in the poorer crowded, unsanitary neighborhoods.   In March 40-year old Andrew Newkirk became ill.  A visiting physician from Roosevelt Hospital dropped into No. 787 Ninth Avenue on the night of March 6, 1894.  The Evening World reported the news which must have terrified other residents.  “Newkirk…was discovered last evening in his apartments…where he had been ill with small-pox for several days.”

Newkirk was removed to the Smallpox Hospital on North Brother Island and a medical team was sent to the Werner tenement building.  “Vaccination and fumigation were employed to prevent further spread of the infection,” said the newspaper.

The police department’s battle against illegal gambling here had not stopped with Thomas Murray’s arrest in 1874.  Twenty-three years later Detective Waters paid a black informant, Perry Steddle, to get evidence against policy shops.  Steddle was no doubt chosen partly because of his race which, for the Hell’s Kitchen crooks, would make him less expected to be involved in a police sting.  On the afternoon of January 22, 1897 Steddle testified that he had purchased policy slips at No. 787 Ninth Avenue.

The difficult conditions of tenement life were exemplified on November 17 that year when Harry L. Rhein died in an apartment here.  He was just two years old.

Michael Healy and his wife lived in No. 787 in 1914, the year he was laid off from his job as an ironworker.  Without an income the 28-year old faced  terrifying consequences; only one of which was the possibility of eviction and homelessness.  On October 15 he walked to the end of the West 54th Street pier where several men were fishing.  He took out a cigarette and asked them for a match.

The New York Times reported “After smoking for a few moments, he took off his hat and coat and jumped over.  He came to the surface only once.”  In the pocket of his coat a policeman found a note requesting “that his sisters Margaret and May and his wife be notified.”  The newspaper added “His wife said that he was worried because he was idle.”

Life in Hell’s Kitchen and at No. 787 Ninth Avenue did not improve in the first decades of the 20th century.  Mary Harmon lived in the building with her husband in the early 1920s.  On the night of January 4, 1923 she was invited to the apartment of 50-year old auto mechanic Arthur Cole, who lived at No. 409 West 50th Street.  He also invited another married woman, 30-year old Henrietta Dalton.

At some point during the evening two more women arrived, Anna George and Margaret Clark (both unmarried).   Now, it seems, Henrietta and Mary became jealous and “the strife for Cole’s attentions began,” according to The New York Times the following day.

The newspaper reported “There had been much drinking among the five persons…and toward morning the women came to blows.  After they had punched and kicked each other about the apartment a knife was drawn and each of the women received wounds.”

Alarmed at the commotion, another tenant opened his window and blew “a police whistle,” which brought Patrolman Harry Reinhart to the scene.   He found Mary with a slashed right breast and blackened eye; Anna George with a stab wound in her leg; Margaret Clark with lacerations and bruises and Henrietta Dalton with her right index finger missing.

The wreckage wrought by the vicious feminine battle was staggering.  “When the patrolmen searched the apartment he found thirty-three empty whisky flasks.  Every window in the apartment was broken and the furniture lay scattered about the rooms.”

Unlike two of the women who were taken to jail, Mary Harmon was able to pay her $10 fine (about $140 today) and was released.  She now had to explain things to her husband back home at No. 787 Ninth Avenue.

Another resident to see the inside of a jail cell was Amedia Ricard, who worked as a waiter at the Tree Club at No. 119 East 55th Street in 1932.  Ricard was no doubt happy to have a Depression Era job and the Tree Club was an upscale nightclub.  The problem was Prohibition, which made the Tree Club a high-end speakeasy.

Early in the morning of July 9 that year Federal agents raided the club.  They seized $25,000 worth of furnishings “including an elaborate bar,” and a “large quantity of cordials, brandies, liquors and whiskies.”   They also seized Amedia Ricard among other employees, who were charged with Prohibition violations.

The Hell’s Kitchen neighborhood retained its seedy reputation until the last quarter of the 20th century.  By 2000 it was being marketed by real estate agents as “Chelsea Heights” and modern apartment buildings began replacing the old tenement structures. 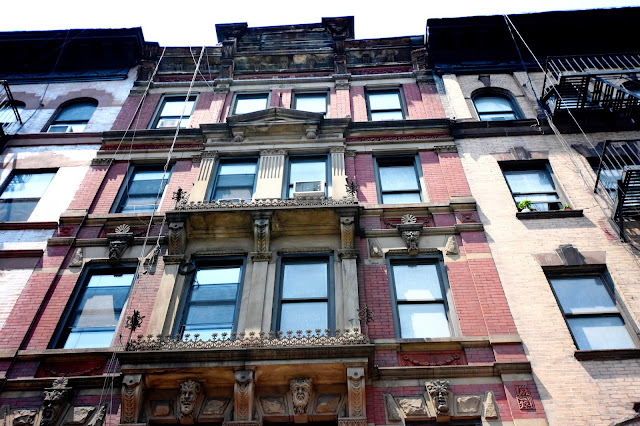 Today a pizzeria and an Afghan restaurant occupy the retail spaces once home to a Victorian variety store and a “segar” shop.  Upstairs the tenants, while not living in luxury, enjoy a much improved lifestyle than their 19th century predecessors.  And all the while the comical faces of the keystones above continue to amuse the pedestrians as they have for more than 140 years.

many thanks to reader M. Hobson for requesting this post
photographs by the author
Posted by Tom Miller at 3:08 AM