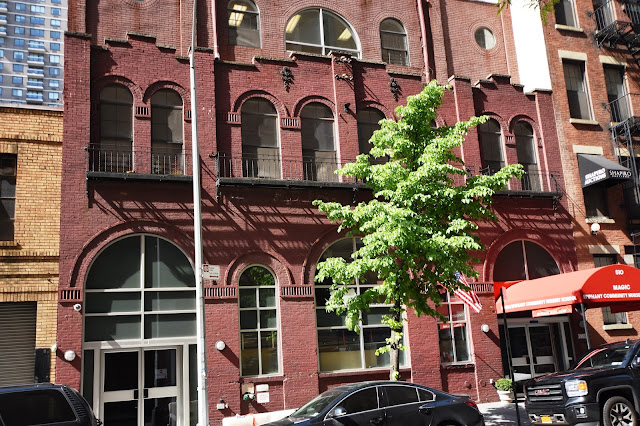 Hans Christian Clausen was already 33 years old when he arrived in American from Bremen, Germany.  After finding work for a time as a machinist, he partnered with Anton W. Hoffmeyer in 1888 to form Clausen & Hoffmeyer Iron Works.

While early advertisements for Clausen & Hoffmeyer hawked “wrought iron;” the firm quickly included cast iron as well.  By the 1890s it was producing ornamental pieces like stoop railings and fencing; as well as more mundane cast iron products like manhole covers.

Largely forgotten today, C. E. Miller was responsible for various residences and “cottages,” and had recently designed the handsome St. Thomas Chapel on East 60th Street.   For Clausen & Hoffmeyer’s foundry, he turned to the currently-popular Romanesque Revival style.   The two large arched openings on the ground floor enabled the easy removal of large architectural pieces like cast iron staircases.  Delicate brick eyebrows and serrated brick bandcourses, rather than the more costly terra cotta or stone trimmings, provided the architectural interest.  Clausen & Hoffmeyer added their own touches with the decorative masonry supports and the no-nonsense iron balconies fronting each of the second floor paired openings.  Instead of a cornice, Miller opted for a series of stepped parapets.

According to a State Factory Inspection report in 1900, Clausen & Hoffmeyer employed 20 men who worked an average of 53 hours each week.   The firm was obviously doing well, for four years later Anton W. Hoffmeyer decided to retire at the early age of 47.  The Real Estate Record & Builders’ Guide reported that the firm was dissolved “by mutual consent on Oct. 31, 1904.”  The journal assured its readers that “Mr. Hans C. Clausen…will continue the business.”

Among the foundry workers here in 1906 was Nathan Richmond who, according to The Sun, “had the reputation of being a practical joker.”  But practical jokes in a foundry setting could be dangerous as Richmond found out a few days before Christmas that year.

On Friday, December 21, Richmond decided to play a joke on Ignatz Polak by putting iron dust in his coffee.  Polak did not find the prank funny and struck Richmond in the side with a heavy forge hammer.  Two days later The Sun reported “At first it was not supposed that his injury was serious, but yesterday it was declared at the hospital that he was likely to die.”

While Nathan Richmond lay in the Presbyterian Hospital, Ignatz Polak was held by police “to await the results of the man’s injuries.”

In 1916 Clausen Iron Works left its foundry, moving a block west to No. 433 East 74th Street.   Nos. 508-510 was purchased by The Standard Iron Works, Inc.   The firm moved in on April 16, 1917, Domestic Engineering explaining “The company’s rapidly growing business has compelled them to increase their facilities.”

That “rapidly growing business” did not support the new location for long.  By 1919 the former foundry was home to the furniture factory of M. Schlesinger, Inc.

The factory building would continue to see various uses as the decades passed.  In the 1930s it was a foundry again, home to the Renaissance Metal Works, Inc, “manufacturers of bronze products.”  But in 1942 it was Lakes Laundry, Inc., described by the Department of Buildings as a “wet wash laundry.”

In 1971 the former foundry was converted to the photo studios and offices of Jenkins-Covington Studios.  Here advertising photo shoots were staged, like the series of television ads for Mennen Company’s toiletries in 1978.

After the building became home to a day care center it received a third floor and "penthouse" in 1996.  The addition, set back from the roofline, sympathetically matched the brick color, and echoed the arched openings and stepped parapet of the original design.   The Epiphany Community Nursery School remains in the former foundry building today--a commendable example of the repurposing of a vintage structure.