When the Doughty family moved into their spacious home at No. 24 West 28th Street in 1848, the neighborhood off Broadway was elegant and refined.  The 25-foot wide residence was faced in brick

Although the Doughty family retained possession of the home, by the time of the Civil War it was being leased to Benjamin D. Brusch and his wife Maria.  Born in 1803, he was the first President of the Columbia Fire Insurance Co., founded in 1853.  It was a position he would hold for life.

The couple had a daughter, Lina, who married William A. Archer.  Tragically, she died on Friday, January 22, 1864 at the age of just 26.  Her funeral at 2:00 on the afternoon of Monday, January 28 was held in the Brusch home.

At some point around this time the house was given a stylish updating when a fashionable mansard roof was added.  The French Second Empire touch reflected the still-respectable tone of the neighborhood.

On Sunday, January 10, 1869 Benjamin D. Brusch died one month short of his 66th birthday.   His funeral was held in the parlor three days later.

By now the one-fashionable area was one of hotels, saloons and gambling parlors.   The hotel annex was the hang-out of the Brower House Gang, described on September 21, 1884 by The Sun.  “It is composed of gamblers, bunco men, and ticket speculators.  The gang drinks at the Brower House bar, which is within fifty feet of Broadway on Twenty-eighth Street.  There is a drug store on the corner.  It is said that its proprietor is against the gang, but he can do nothing.”

The proprietor of a store on the opposite of Broadway told the Sun’s reporter, “As gangs go, this is an uncommonly high-toned one.  The Brower House Gang is the envy of every other gang in New York on account of its exalted position in crime, its swell clothes, and the influence it possesses here-abouts.”

The gang had about 40 members and no fewer than 15 of them were stationed in the vicinity to keep watch.  The storekeeper said “It is not an uncommon thing to see the gang start one of their numbers on a bunco victim.  If a country man comes along, the whole crowd will direct their attention to him and one or two of the bunco fraternity will start on his track.”

The chief cook at the Brower House in 1888 was Albert Kappe.  It appears that even the kitchen staff at the hotel had little respect for law enforcement types.  On the afternoon of April 4 that year Policeman George Murdock noticed Kappe “and a French friend, both under the influence of liquor, walking in Wooster street, insulting every person they met,” reported The Sun on April 26.

The policeman approached the pair and admonished “Behave yourselves, or I’ll take you in.”  Kappe responded by slapping Murdock in the face.  He then ran through an alleyway to his home at No. 204 Wooster Street.

When Officer Murdock knocked on the door, he was “slapped in the face by Kappe’s wife.  Mrs. Kappe said that she slapped Murdock because he had no business to come to her house.”

The character of the 28th Street and Broadway neighborhood was evidenced in August 1894 when Louis Hoefer took the law into his own hands.  He was the proprietor of Pinochle Hall, “a beer saloon in the basement of the Fifth Avenue Theatre,” directly across 28th Street from the Brower House.  Pinochle Hall was characterized by The Evening World as “the saloon in which Fire Commissioner John Scannell shot the alleged slayer of his brother.”

Twice that summer the bar had been burglarized and the police had no suspects.  So Louis Hoefer took a room on the 28th Street side of the Brower House.  “Every night, after closing his saloon, Hoefer spends several hours peeping through a hole in his window shade, and keeping watch on his saloon,” reported The Evening World on August 28.  “He is in hope that the burglars will pay his place another visit, and if so, they will get a warm reception.  His pistols are loaded.”

At the time of Hoefer’s vigilante security system the Brower House Hotel was operated by Joseph Crocheron.  But the hotel man’s health was failing fast.  On September 13, a year earlier, the New-York Tribune wrote of reports that Crocheron “had had a second stroke of paralysis and was seriously ill.”

Now, on October 13, 1894, The Sun reported that Crocheron had sold the lease on the hotel to John E. Bacon, of Syracuse, and E. H. Jones of Boston for $18,000.  The newspaper noted that the hotel proper, facing Broadway, had been owned by Charles A. Baudouine for about 10 years.  The annex on 28th Street was still owned by the Doughty family.

Only three months later the new leasers sold “the furniture, lease and goodwill of the Brower House” to E. M. Brawner, of Baltimore.  The New-York Tribune said they “disposed of their interest at a handsome profit.”

Brawner would have little time to run the hotel, however.  On March 24, 1895 the New-York Tribune said “It is reported that the old Brower House property, at Broadway and Twenty-eighth st., is to be converted into a twelve-story steel-frame fireproof building.”  Indeed, Charles Baudouine’s estate demolished the old building and commissioned Alfred Zucker to design a handsome store and office structure.

But the old house at No. 24 West 28th Street, still owned by the Doughty family, survived.  In August 1896 Hiram B. Cannon leased it for ten years at $6,000 a year—about $175,000 in today’s dollars.  Next door at Nos. 26 to 28 West 28th Street James Everard had opened a large Turkish baths in 1888.  He was the owner of the James Everard’s Brewery and is appears that around the time of Cannon’s lease signing that Everhard took over the street level saloon in No. 24.

Everhard’s saloon lasted until about 1918, after which Samuel Doughty leased the space to the Elk Restaurant and Bakery Company.  In 1920 Doughty had the second floor converted to offices "for no more than five employees," while Department of Building records noted the first floor had an “existing restaurant.”  The uppermost floors were vacant.

The Elk Restaurant and Bakery would not survive long.  In February 1921 the firm declared bankruptcy.  Doughty hired architect Victor Mayper to slightly re-do the structure.  The first floor remained a restaurant; however the second floor was now termed “a dwelling.”  The upper floors still remained unused.

That would all change in 1932 when architects Slee & Bryson broke through to the Everhard Spa Turkish Bathhouse next door.  The completed conversion was now described by the Department of Buildings as a store and restaurant downstairs, “office, reception, rest and bath rooms” on the second floor, and “rest rooms” for a Turkish bath on the upper floors.

Following Samuel Doughty’s death, his estate liquidated the old house on West 28th Street.  The New York Times reminded readers “At the time of the purchase of the property by the seller’s family ninety-one years ago, Broadway was known as Bloomingdale Road.”

Somewhat surprisingly, as the decades passed and the neighborhood changed, the Everhard Baths remained.  Public baths were common at the turn of the century; the only means for tenement dwellers to properly bathe.  And Turkish baths were popular for their purported health and fitness properties.  But by the 1920s the Everhard Baths had become a meeting place for homosexuals.

The Baths would continue here for decades with some rather high-profile patrons—Truman Capote, Rudolf Nureyev and Alfred Lunt reportedly among them—who wrote of their evenings here.  On May 25, 1977 a fire broke out in the warren of hallways and rooms in the original building.  Nine patrons between the ages of 17 and 40 lost their lives.  Nevertheless, the damages were repaired and the business reopened.  Finally, in April 1986 with the AIDS epidemic rampant Mayor Edward Koch closed it down. 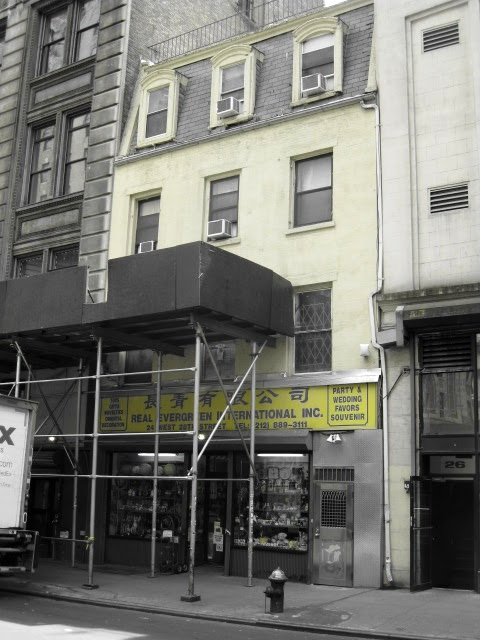 Today the ornate Victorian saloon front has been replaced by a stark modern storefront.  The brick has been so heavily painted that it appears at a glance to be stucco-covered.  For years a sidewalk shed wrapping the corner from Broadway has partially hidden the facade.  And yet the Doughty house retains its residential character after a century and a half of colorful use.