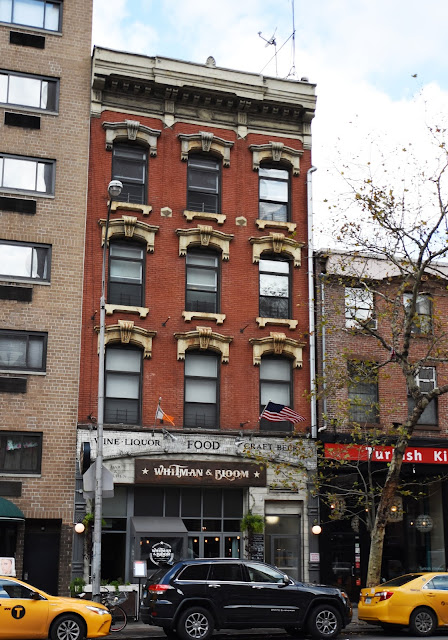 In the 1870s Dealy & Cunningham operated at Nos. 384 and 386 Third Avenue, between 27th and 28th Streets.  The company offered “carpets, furniture, bedding, &c.” at “prices lower than any house in the city, according to an advertisement in February 1873.  The working class status of the area’s residents was reflected in the store’s “weekly or monthly payments.”

Within the decade the location had become the E. O. Carrington Storage Warehouse.  Carrington ran his carpet “cleaning and renovating” business here.   But following his partner’s death in 1883, Eben O. Carrington fell on hard times.

In the meantime, the high-class Madison Square Presbyterian Church had been organized in 1853.  The brownstone Gothic Revival church faced Madison Square, several blocks to the west.  In its outreach to the impoverished East Side the church opened the Madison Square Church House at No. 430 Third Avenue, between 32nd and 33rd Streets, in the autumn of 1886.   Gospel services and bible classes were held there, as well as a kindergarten, a boy’s club, and lodging rooms on the upper floors.

On September 15, 1894 Wilton Tournier, writing in The Outlook wrote “Services are held nightly in the Mission Hall of the Church-House, which is situated on Third Avenue.  Residents in the tenement-houses of adjoining streets attend in large numbers.  There is a sprinkling of the class known as ‘tramps’ and women of the street.  Members of the fashionable Madison Square Church work here among the poor at the mission services.”

But the Church House was already becoming inadequate.  Within the year the old Carrington warehouse at No. 384 Third Avenue was gone, replaced by the new Madison Square Church House.  A cast iron base supported three stories of red brick, ornamented with muscular Victorian cast iron window lintels.  A hefty cast cornice added to the aggressive architecture.  A single antefix crowned the cornice.  It was repeated in the cast iron piers at street level and in the keystones of the lintels.

The powerful Rev. Dr. Charles H. Parkhurst of the Madison Square Presbyterian Church headed the 10th anniversary ceremony here on November 22, 1896.  He pointed out that the Church House was different from other groups because it focused on families rather than individuals.

“When a family is converted, it is more likely to stay converted than the individual who drifts off into the world again,” he noted.  The new location had proved itself already.  More than 45,000 persons had attended the Mission services during the past year; an increase of several thousand over the year before.

The Outlook commented on the “well-to-do members of society” who personally visited the tenement families.  “The latter gain a friend willing and able to help them to better conditions, and the former find pleasure and happiness in doing good…Families have been lifted from a state of semi-starvation, filth, and degradation of every kind, to cleanliness and comfort.”

The Church House also acted as a sort of employment agency for the impoverished East Side residents.  Normally these were, for instance, young girls seeking positions as domestic servants, or out-of-work men who needed factory work.  But Pauline Richter was quite different.

Born in New York City of Swiss and German parents, she spoke five languages.  When she was about 16 years old she visited an aunt in Geneva, Switzerland, and while there met an attaché of the Japanese Legation stationed there.  She married the man, named Izuka, and they had a son and daughter.  But domestic abuse followed.  After a few years together “her friends declared that her husband began to treat her badly and to starve her,” reported The Sun years later.

Pauline focused on educating her children, especially her son.  The family was transferred back to Tokyo; and in 1887 Pauline divorced Izuka and earned a living by teaching French, German and English to members of the Japanese court.  The Sun explained “She had plenty to do at prices ranging from $1 to $3 an hour, and frequently she would get as much as $3,000 in hand.”

Pauline’s lawyer, Alexander Tison, advised “Whenever she got this amount she would go off traveling, spending her money with a lavish hand.  I have heard of her giving $5 tips to waiters.  When her money was gone she would go back to work and earn more.”

For the next few years Pauline traveled, often coming back to New York.   She endured “fits of insanity” according to her lawyer and in 1895 had sought his help after depositing all her money in a Munich bank.  She had destroyed her bankbook and could not access her funds.  By 1897 her mental instability and the resulting financial irresponsibility left her destitute.

Tison told authorities that “Mrs. Richter had been a very able and brilliant woman, and had a romantic history.”  On July 12 that year he said “Two months ago I heard through a charitable organization that she was here again, but I have not seen her.  I think she arrived in April or May.”

That “charitable organization” was the Madison Square Church House.  When Pauline Richter first arrived back in New York from Japan, she applied here for work.  The Sun wrote “It was understood that she had money enough with her to last through the summer.”

The Church House obtained her a position as a servant at the boarding house of Theodore W. Pettit in Far Rockaway.  She gave up her work there on July 3, leaving with a recommendation letter from Mrs. Pettit.

A week later, on the afternoon of July 12, 1897, Central Park Policeman Joseph Verity found Pauline unconscious among some bushes near the East Drive in the park.  On the ground beside her was a vial that had contained carbolic acid—a common means of suicide in the 19th century.  Pauline died early that evening in the Presbyterian Hospital without gaining consciousness.

Rather astoundingly, only two years after the new building was opened, it was too small.   Rev. Dr. Charles Henry Parkhurst recalled in his 1906 A Brief History of the Madison Square Presbyterian Church that “In October, 1898, owing to the urgent need of better and larger accommodations” a “plan was set afoot” to build a suitable building to house all the departments of the East Side work.

The Kindergarten and Girls’ Clubs were already housed in a separate location for lack of space.  Other departments soon moved out.  A report to the New York State Assembly on social settlements noted “Neighborhood work having outgrown the room at 384 Third Avenue, Dr. Angenette Parry, who devotes much time to visitation among the needy sick of the district, giving them medical advise and treatment, opened her home at 249 East Thirty-second Street in August, 1899, for the use of neighbors pending the construction of the new Church House.”

On June 4, 1900 architects Howells & Stokes submitted plans for the new Church House at the northwest corner of Third Avenue and 30th Street.  The $60,000 structure would contain facilities impossible in No. 384—including a large gymnasium, an auditorium, and club rooms for boys and girls. 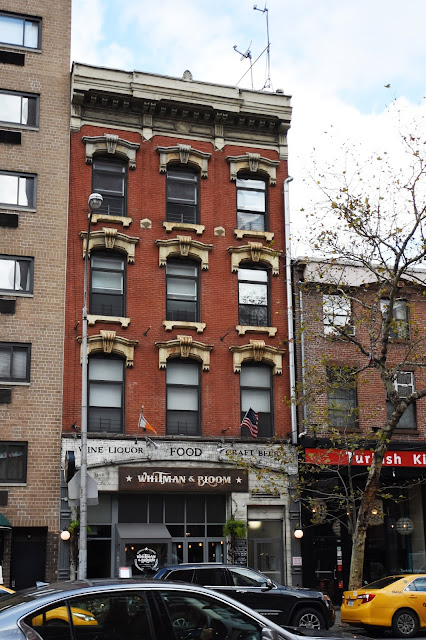 The former Church House was converted to a store at ground level with residential space above.  Somewhat ironically, the Carrington carpeting business was back here by 1922.  As early as 1932 brothers Louis and Joseph Weinstock opened their hardware store in the building.  Weinstock Brothers would be a neighborhood fixture throughout most of the century—well into the 1980s.

By the 21st century the neighborhood where tramps and degraded women once roamed had seen significant change.  In 2008 a conversion of the upper floor was initiated which, when completed, resulted in one upscale apartment per floor.

Where gospel meetings were once held on the first floor, a trendy bar-restaurant now operates.   The cast iron storefront has been heavily altered, but the robust architecture of the upper floors lives on.

non-credited photographs by the author
Posted by Tom Miller at 3:16 AM