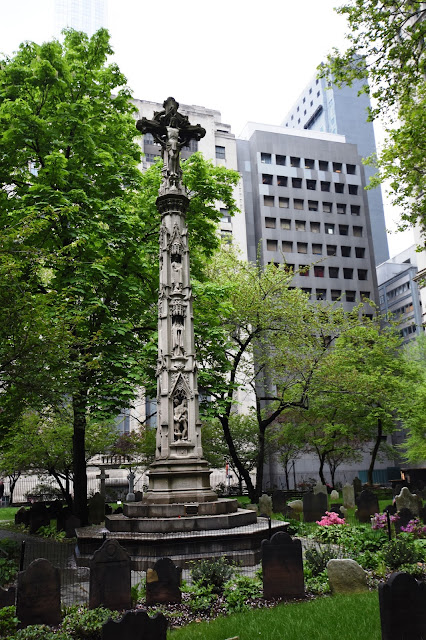 Although Caroline spent the first years of her married life focused on her children; she gradually became increasingly involved in society.  Eventually she reigned as the undisputed empress of New York society.  Uncowed by his wife’s imperious personality (she was embarrassed by his middle name Backhouse, for instance, and insisted he use only the initial); William eventually avoided confrontation.  Initially he would while hours away at his social clubs during Caroline’s entertainments; but eventually spent most of the summer season, when the Astors were in their Newport cottage Beechwood, on his yacht the Ambassadress and the winter season in Jacksonville, Florida.

In stark contrast to her public reputation; Caroline Astor was a doting mother and grandmother.   Two years after William Astor died in 1892, she and her son, John Jacob Astor, began construction on a massive double mansion on Fifth Avenue at 65th Street.

As the new century dawned, the aging Caroline Astor’s health began failing, then worsened.   The Evening World mentioned in October 1908, “For more than a year she has received nobody but her physician and her daughter, Mrs. Wilson.  The only sign of life about her house since April last came from the windows of her room.”

“Mrs. Wilson” was Caroline Schermerhorn Astor, the Astors’ fourth daughter, named, obviously, after her mother.   Known as Carrie, she had married the wealthy Marshall Orme Wilson in 1884.  Following her mother’s move to Fifth Avenue and 65th Street, the Wilsons erected a lavish limestone mansion a block away at on 64th Street in 1903.  When word arrived on October 30, 1908 that Caroline Astor was failing, Carrie rushed from her home to her mother’s bedside.  At 7:30 that night the larger-than-life socialite died at the age of 78.  Carrie was the only member of the Astor family at her side.

Caroline Webster Schermerhorn Astor was buried in Trinity's Cemetery in upper Manhattan.  Like other Astors, she had been a communicant of the church despite the uptown migration of society.   Within four years her devoted daughter embarked on plans to further memorialize her.

In 1911 Trinity Church had commissioned architect Thomas Nash to design an addition to the church--the All Saints’ Chapel.  It was no sooner completed in 1913 than Nash was working on another Trinity project—a “churchyard cross” commissioned by Carrie Astor Wilson as a monument to her mother.

On August 5, 1913 American Stone Trade reported “Trinity Churchyard, lower Broadway, New York City, will shortly have a unique example of modern sculpture in the form of a churchyard cross to be erected by Mrs. M. Orme Wilson in memory of her mother, Mrs. William Astor.”  The trade journal described the 36-foot tall memorial saying “The design in its general lines follows the idea of the many crosses to be found in England and on the Continent and the great shaft with its superb carving crowned by the figure of Our Lord reigning from His Cross will be most impressive as seen across the churchyard among the trees.”

When Trinity’s rector, the Rev. Dr. William T. Manning saw the completed model in April that year, he advised reporters “It is said that the cross…compares favorably with the finest works of similar art in the older land.  The design embodies the idea of the genealogy of our Lord as given by St. Luke.  In the twelve niches in the shaft are the figures of our Lord’s human ancestors.” 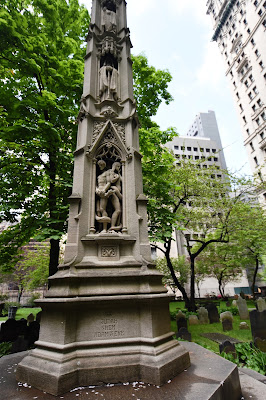 While the idea of sculpting the memorial in white marble was considered; the decision was to use Indiana limestone.  The choice of the more durable stone was fortunate, resulting in the carvings remaining crisp decades later.   Thomas Nash was an architect, not a sculptor, and his model was sent to James Gillies & Sons in Long Island City for execution.  Here a team of artists worked on the monolith for about a year.

The memorial cross was dedicated just before noon on May 30, 1914 with what The Sun called “impressive services.”   Rev. Manning made note of the Old Testament motif in his remarks.  “This beautiful structure as a whole will speak of the close relation between the Jewish and Christian religions.  It will remind us that we all worship the God of Abraham,” he said.

Manning said that the erection of the medieval-type cross in Lower Manhattan was significant.  “It is most appropriate that this striking symbol of the Christian religions should be lifted up…in the midst of the eager crowds and the great business interests in the lower part of the city.  It will give its message every hour in the day to the hundreds of people who enter the churchyard and to the throngs who pass by on the street.”

Stone magazine commented “This cross serves to emphasize the fact that this country is sadly lacking in beautiful and artistic memorials of the kind…Memorials like the Astor cross, scattered through the various churchyards of the land, would do much for the cultivation of public taste…Trinity Church is pointing the way.”

Within the year the Churchyard Cross, which was already assuming the popular name the Astor Cross, became one of the first monuments in Manhattan to be lit at night.  Popular Mechanics pointed out years later in April 1929 that “four floodlights focus their beams on the cross.”

As Dr. Manning predicted, the Astor Cross drew downtown workers.  On November 15, 1943 Life magazine published a photograph of suit-wearing Wall Street types sitting on the base of the Cross during lunchtime.

But the memorial was not merely a convenient place to take lunch.  When the Rev. Dr. John Heuss was formally installed as the 13th rector of Trinity on June 3, 1952, two processions converged at the Churchyard Cross before entering the church.  And when Rev. Heuss celebrated Rogation Sunday on May 6, 1956, he led a procession out of the church to the Churchyard Cross where he recited prayers and the choir sang. 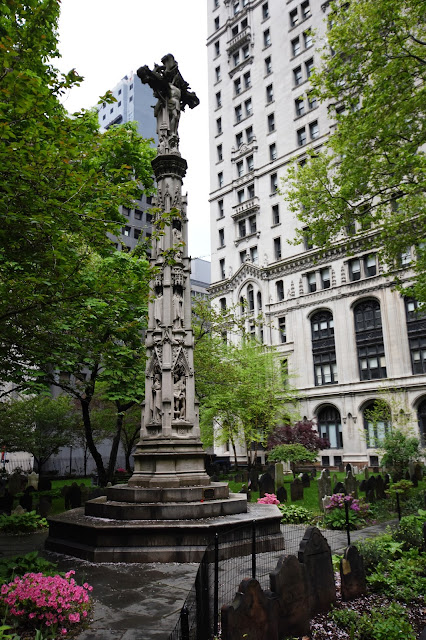 The Astor Cross remains the focal point of the northern churchyard.  Thousands of tourists photograph it every year and Wall Street brokers still sit on its base at noon.  Few, however, realize its purpose—a monument to a queen of Manhattan society and an adoring mother.