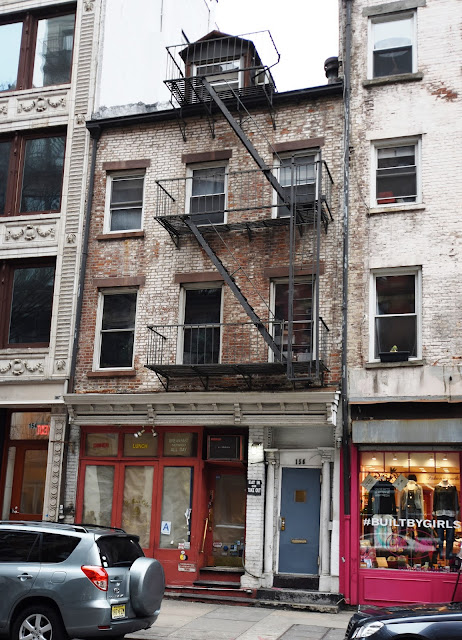 Spring Street, formerly a dirt road that led from the East Side to the Richmond Hill estate and Greenwich Village, saw rapid development in the second decade.  George Wragg had inherited a sizable property, including most of the southern side of the block of Spring Street between Wooster Street and Laurens Street (later renamed West Broadway).  In 1818 he started improving his plots with Federal-style homes.

Among them was No. 156, completed in 1819.  Three stories tall, a single dormer punctured its peaked roof.   Flemish-bond red brick was trimmed with simple brownstone sills and lintels.  The sparse decoration was reserved for the entrance, two steps above the sidewalk.  Here fluted Ionic columns stood before the wooden door enframement, carved to imitate stone blocks.  Above the doorway a transom with egg-and-dart framing allowed sunlight into the hallway. 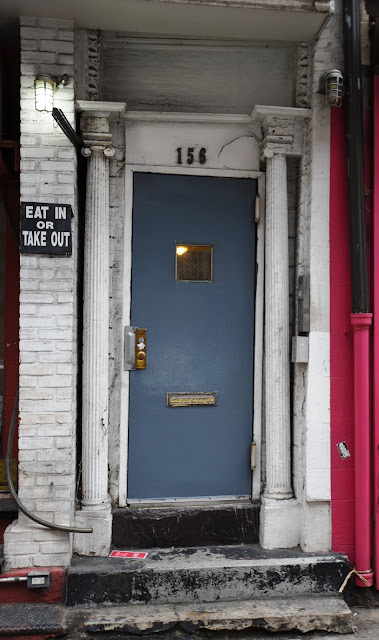 Quite possibly the house was constructed with a shop on the street level; but certainly by the end of the Civil War one was there.  In 1869 Frederick Schuster operated his business here and he, like many other businessmen, was upset over the recent Presidential elections.

Civil War General Ulysses S. Grant was popular in the North and had defeated the Democrat Horatio Seymour with 52.7 percent of the popular vote.  But Schuster and his peers were outraged at perceived irregularities within Manhattan’s voting procedures.

In the spring of 1869 the New York Assembly was busy discussing issues as far-reaching as the Erie Canal extension, the construction of a new Capitol building, and building a sewer system for the rapidly growing population of Manhattan.  But on April 14 it listened to the reading of a petition signed by Frederick Schuster and 2,000 other New York City businessmen that asked for a committee to investigate corruption.

Voting fraud, it claimed “with the direct sanction, approval or aid of many prominent officials and citizens of New York, and with the shrewdly-concealed connivance of others,” had “robbed the people of that great State of their rightful choice of electors of President and Vice-President, of a Governor and other officers.”  A thorough investigation, the signers claimed, would prove that many had voted more than once, for instance.

Within a few years the store became home to John Hersche’s shoe shop.  Here, around 2:00 on the morning of August 30, 1873, a small fire broke out.  Luckily it was quickly discovered, doing only about $100 in damages before being extinguished.  The shoe shop would remain in the building for decades, his son taking over the business later.

No. 156 was owned by wealthy George Lorillard at least by 1881.  He owned much property in Manhattan, although he lived in Rhinebeck, New York.  Following his death, the house was sold to Benjamin B. Johnston on December 1, 1887 for $14,100—approximately $365,000 in 2015.  Almost immediately Johnston, who lived in Brooklyn, commissioned architect L. Sibley to install a new storefront at a cost of $300.

In 1890 Charles A. George, his wife, and their three children were living in two upper rooms.  The Georges were married in their native France in 1882 before the extended family, including George’s parents and his in-laws came to New York.

The Evening World noted “They came to this country, and for a time all was happiness.  George obtained work with his father in a looking-glass factory on Canal street.  He earned good wages, and supported his wife and three children until he began to drink.”

According to newspaper accounts, not only did Charles George began drinking, so did his wife.  And, as was often the case in Victorian accounts, liquor led to disaster.  “Then they speedily grew poorer,” explained The Evening World, “and were recently obliged to move into two small rooms…One of the two rooms is a bed-chamber in which two narrow cots are crowded side by side.  Man and wife sleep in one of these cots and the two little boys in the other.  The little girl is cared for by her grand-parents.”

George earned $18 a week, but, according to his wife, he “spends it all in whiskey.  One day he gives me 15 cents, next day 25 cents, never more than that, because he says I would drink it up.  Well, perhaps I would, but last Saturday my baby there was so sick that I got the doctor—Dr. Lorenzo.”

On Saturday, April 19, 1890 the doctor quickly diagnosed the boy’s problem—he was starving to death.  He prescribed medicine, telling Mrs. George that her three-year old was on the verge of death.   She later told investigators “So I waited all day, not drinking one glass of beer until my husband comes home at night.  Then I ask him for the money to buy medicine and food for my baby, but he was drunk and would not give it.”

The couple’s argument continued throughout the following day.  According to The Evening World on April 28, “They quarreled all night and drank heavily all of Sunday.” Angered with his wife’s unrelenting pleas for medicine and food for their son, Charles beat her; until finally, fearful for her life, she sent their oldest son to get her mother.

Alice Andre lived one block away, at No. 171 Spring Street and she was at the George home within minutes.  Charles George now turned his wrath upon his intruding mother-in-law.  As she fought back, “her son-in-law knocked her down and tore her gray hair out in handfuls.  It was found in bunches on the floor and in the hallway the next day,” reported The Evening World.

As she started to her feet, the 53-year old Alice Andre grasped the small hatchet used for chopping kindling.  Three blows on George’s head ended the fight.  He was taken to St. Vincent’s Hospital with four gashes to the head and a compound fracture of the skull.

An Evening World reporter arrived at the George’s rooms the following morning.  The newspaper reported “The mother, her face black, blue and scratched, staggered about, almost stupid from drink, in the outer room and paid no attention to an Evening World reporter’s entrance nor his movements.”  It described the starving boy, saying “Buried in the bedquilts this morning, one of the boys, about three years old, breathed heavily.  His little eyes twinkled restlessly in the darkness.  His tiny fists were clenched and his limbs were not as big around as a good-sized cane.”

While the reporter was there, a detective arrived, asking where Alice Andre was.  Mrs. George refused to tell her, “but inquired eagerly for news of her husband.”  Detective Savercool was brutally frank.  “Your mother is probably a murderess.”

On April 28 The Evening World reported that “Mrs. Alice Andre, of 171 Spring street, under arrest for assault with a hatchet upon her son-in-law, Charles George, a mirror-maker, must now answer to a charge of murder, the wounds upon George’s head having proved fatal.”   The New York Times seemed to have little sympathy for his death.  It got his profession wrong when it reported “Charles A. George, a dissolute French gun-maker of 156 Spring St…died yesterday at St. Vincent’s Hospital.”

In the meantime Mrs. George was also arrested, charged with being “an habitual drunkard”—charges which today would amount to child endangerment and neglect.  The children were given over to the care of the Society for the Prevention of Cruelty to Children.

Alice Andre went on trial in May.  Charles A. George somewhat atoned for his vicious behavior with his dying breath and most likely saved Alice Andre from a long imprisonment.  “Her son-in-law’s dying statement that he deserved what he got was also laid before the Courts,” said The Evening World on May 9.  Alice was freed after it was successfully argued that she “acted in self-defense and was trying also to save her daughter and two grandchildren from being murdered by George.”

The following decades would provide far less drama.  Working class residents over the years lived in what were not always the best conditions.  In 1909 the building was cited for “defective plumbing” by the Department of Health.

The ground floor store was used for “shipping and receiving” in 1946 and at some point a coating of white paint covered the red brick.  But throughout the rest of the century the 19th century storefront, the dormer, and, astonishingly, the Federal-style entrance survived.

As the Soho district was discovered by artists, the upper floors of No. 156 were converted to artists’ studios in 1972—one on the second floor and a duplex in the third and attic floors.  Dimitri’s Spring Street Café, operated by Dimitri Chatzidakis, took over the old store space.  When it opened in September 1983 Chatzidakis offered New Yorkers something they could get nowhere else in the city.

New York Magazine reported on September 12 that “There are connoisseurs who insist that Ben and Jerry’s Homemade…is the best ice cream in America.”  No store in Manhattan carried the confection—until now.   “Ben Cohen himself and his ‘famous Vermont cow’ were on hand for the opening of Dimitri’s Spring Street café, in SoHo, all spanking fresh in pale blue and gray,” said the magazine. 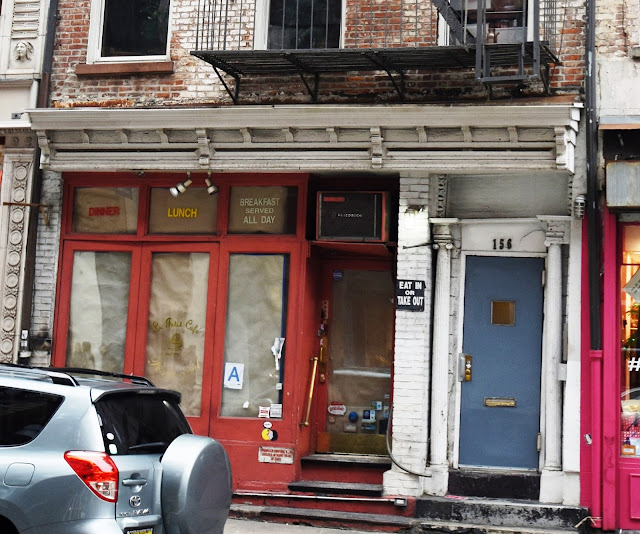 In 2007 a renovation was started which updated the artists’ studios.  It was completed a year later.  The project did not address the exterior, leaving the building with a rather charming time-worn feel.