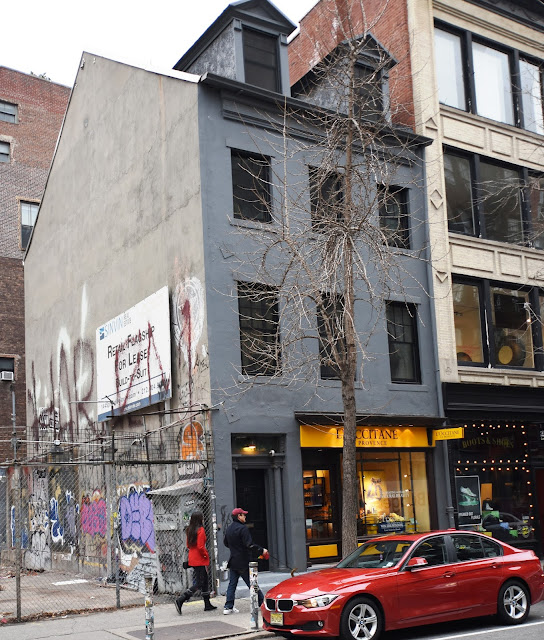 Joseph Watkins and his wife, Elizabeth, owned a large rural estate north of the city in the early 19th century.  The family lived in a house on Spring Street.   As the city spread northward, Watkins’s land saw the gradual construction of modest brick homes.

Watkins died before 1819.  George Wragg was one of the three executors of his estate.  An Act “for the relief of the devisees of Joseph Watkins” was passed in Albany on January 28, 1820, which permitted the men to sell off Watkins’ property except “a certain house and lot of ground in Spring-street, devised to his wife and daughters.”

George Wragg had already purchased the southern block front of Spring Street, between West Broadway and Wooster Street from Watkins.  His plans for developing the block were nearly thwarted when the City proposed to widen Spring Street from Thompson to Wooster Street in 1817.  Wragg knocked on the doors of the few houses that existed at the time, then presented a petition to the Common Council on October 20, 1817.

The Minutes noted “A Petition of George Wragg, and a Remonstrace from sundry Inhabitants remonstrating against the widening of Spring Street from Thompson Street, were read.”  The Council decided to abandon the plans.

Wragg went on with his project and in 1819 completed the row of houses that lined the block.  No. 146 Spring Street sat one house away from the Wooster Street corner.   Three-and-a-half stories high, it was a commodious three bays wide.  The handsome Federal style entrance at street level—with its fluted Ionic columns and egg-and-dart detailing around the transom—placed the house a step above a working class dwelling. 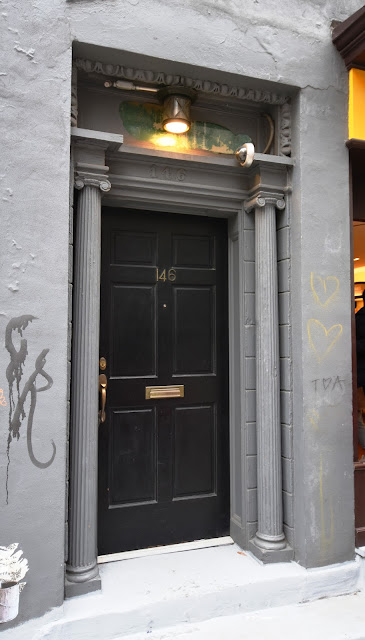 No. 146 may not have always had a shop in the first floor; but there was a pharmacy in the house by 1850.  On November 16 that year an advertisement for James A. Quinn’s Cough Candy appeared in the New-York Daily Tribune.  “A sure cure for Coughs, Colds, Asthmas, Sore Throats, Hooping [sic] Cough, Influenza and all diseases leading to Consumption.  This Candy is prepared under the advice of a skillful Physician, and may be relied on in all cases.”  The ad noted that the miraculous lozenges were available at No. 146 Spring Street.

The drugstore was possibly run by William E. Smith, who lived in the upper floors in 1853.  The house had changed hands by 1868 when Albert Moore leased the store to Frederick Moog for three years at $725 per year.   His rent would equal a little more than $1,000 a month in 2016.

John Hersche operated his shoe shop here in the 1870s.  A fire broke out in the store around 2:00 on the morning of August 30, 1873, causing Hersche $100 in damages.  His son, Frederick, had taken over the business by 1891.  He earned extra money as a voter registration clerk.

By now the upper floors of the former house were being used for factory work.  Brothers Samuel and Isidore Epstein moved here in 1890 after their shop at No. 213 Greene Street burned.  S. Epstein & Sons manufactured hats and caps and  in 1895 its 10 male and two female employees worked an average of 54 hours per week.  That year the Epstein brothers retired, turning the business over to Louis W. and Benjamin Epstein.  They renamed the businesses Louis W. & B. Epstein.

The Hersche shoe shop was gone in 1898.  In its place was a barber shop which served voters in the neighborhood that year as their polling place.  It was replaced in 1901 by the L. Baumann furniture store.

The same year that Baumann moved in, James K. Bradt was making gloves and mittens on an upper floor.  Bradt started out nearby at No. 110 Spring Street in January 1886, “his attention mostly to the manufacture of gentlemen’s fine kid gloves,” according to Washington Frothingham in 1892.

Although Bradt’s was a small operation, staff-wise, with just five men who worked 59 hours a week; it turned out 9,000 dozen pairs of gloves in 1891.

The Soho neighborhood, and No. 146 Spring Street specifically, went through a series of changes in the 20th century.  In 1921 Gennaro Mazzi operated the G. Mazzi Cigar Company here; and in 1942 Charles Cella manufactured wooden chairs in the building.  But in 1950 when Frank M. Conte purchased the property, it was described as a “tenement,” assessed at $8,500.

Spring Street, overlooked for years, was rediscovered in the second half of the century as artists transformed Soho into the nucleus of the Manhattan art community.  In 1981 Pinx, a vintage clothing store, took the ground floor space where miraculous cough drops were snatched up in 1850; and in 2005 the upper portion was converted to one apartment per floor.

Rather astonishingly, throughout its nearly 200-year history little changed to the outward appearance of No. 146.  Despite a coat of gray paint and modernized windows and storefront; the 1819 Federal doorway and the prim dormers survive.