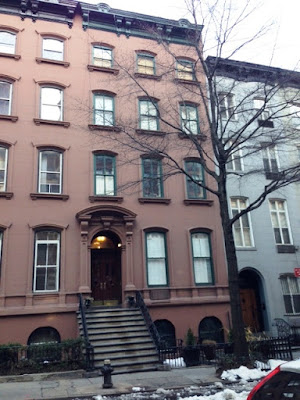 Murray Hill had already earned its reputation as a high-end residential enclave by the mid-1850s.  Developers Kennedy & Haw added to it by erecting two nearly identical homes at Nos. 113 and 115 East 36th Street, between Park and Lexington Avenues.

Construction began in 1858 and was completed the following year.  Like its next door neighbor, No. 115 rose four stories above the English basement.  A commodious 24-feet wide, its Italianate style was the latest in residential taste.  An elaborate entrance with curved pediment, broad stoop, and handsome cornice on foliate brackets spoke of the wealth of the intended owner.

Kennedy & Haw sold the house to John Robinson before construction was completed.  How long the Robinson family lived here is unclear; however by 1870s it was home to Hermann Von Keller and his wife, the former Helene Alwine.

Von Keller was born in Germany, but had arrived in New York in the 1840s.  In 1868 he founded the firm Von Keller & Allen, cloth dealers, with a shop at the corner of William and Ann Streets.  He and Helene had three children and by the time they moved onto East 36th Street he was well-known among the well-to-do German merchants.  His native roots were reflected in his memberships in the Arion Society and German Club.

Title to No. 115 was in Helene’s name.  It would appear that the Von Keller family intended to leave the house in 1877; for on June 30 that year they loaned Robert M. Gallaway $15,000 towards the purchase of the property.  That purchase, however, never happened.

In January 1878 Hermann Von Keller became ill.  A few days after his condition developed into pneumonia he died in the 36th Street house on February 4 at the age of 58. 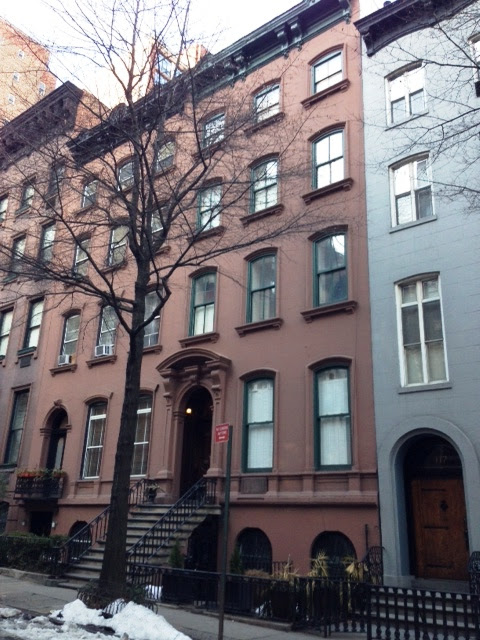 Louis Fitzgerald was 42 years old at the time of the purchase and Gelyna Verplanck Fitzgerald was just 28.  She was apparently interested in the exciting area of archaeology and was a member of the Egypt Exploration Society.  The couple would have four children.

The Fitzgeralds remained in the house for a decade, selling it 10 years to the day on April 20, 1890 to Joseph Carson and his wife, the former Matilda Grayson Moore.  Neither of the wealthy couple was originally from New York.   When they were married here on Tuesday, October 27, 1857, Carson had recently relocated from Baltimore.  Matilda, the only daughter of William and Eliza Moore, was from St. Croix.

As society continued its relentless northern migration, leaving formerly elegant neighborhoods to be consumed by commercial districts; Murray Hill held firm and retained its upscale reputation.  The Carsons paid $46,250 for No. 115 East 36th Street—nearly $20,000 more than the Fitzgeralds had spent only 10 years earlier.

Moving into the residence with the middle-aged couple was Matilda’s widowed mother, Eliza Whitley Graydon Moore.  The 80-year old died in the house on Tuesday, March 10, 1891 and her funeral was held in the parlor two days later at 10:00 a.m.

On February 8, 1896 the Real Estate Record & Guide reported on the shockingly-fast increase in property values on East 36th Street.  It noted that Matilda G. Carson had sold No. 115 for $53,000—a more than $7,000 profit within six years.  In an embarrassing “oops” moment, the Guide was forced to admit its error a week later.   It was the Clark house, directly opposite at No. 118 East 36th Street that had sold for that amount.

Nevertheless, the Carsons did sell and before the end of the year the family of George Evans Turnure had moved in.   The wealthy Harvard-educated banker was a partner in Lawrence Turnure & Co., the firm founded by his father.

Turnure’s wife was the former Elizabeth Z. Lanier.  The Lanier family traced its American roots to Thomas Lanier, a Huguenot refugee who sailed from England in 1655 with a friend, John Washington, the great-grandfather of George Washington.

The couple, who had five children, maintained a lavish country estate in Lenox, Massachusetts.  As their daughters grew, their introductions to society would require proper entertainments.  On December 7, 1911 the first, Elizabeth, was introduced at a reception in the 36th Street house.   Mary Mildred and Irene would soon follow.

Less than a year later Elizabeth would shock the society to which she had just been introduced.   Allen Blanchard Fenno was the organist of Trinity Church in Lenox and an accomplished baritone singer.  On November 20, 1912 he was to serve as an usher at the Brooklyn wedding of Charles Hall Tompkins and Alice Lima MacGuffog.  But Fenno did not show up.  The following day a headline in The New York Times read “Usher Was On Honeymoon—Allan B. Fenno Failed to Attend.”

Elizabeth and Fenno had eloped.  The Times said they were “secretly” married on Monday, just two days prior to the Brooklyn ceremony.   The scandal did not last and the Turnure family embraced Fenno.  On September 21, 1915 when Elizabeth’s cousin, Kitty Lanier Lawrence married William Averell Harriman in a socially-important ceremony in Lenox, Allan B. Fenno played the organ as the guests—with surnames like Harriman, Post, Colgate, Winthrop, Rutherford, Lovett and Hamilton—arrived.

A year earlier, Mildred had been married in the same Lenox church to Roger Wolcott Griswold.  Her brother, George, served as an usher.  Following the ceremony the reception was held in the Turnure villa, Beaupre.

On May 20 The Sun reported that George E. Turnure “has resigned as president of the Lenox Brotherhood Club because of his pending absence abroad, and Allen B. Fenno, Mr. Turnure’s son-in-law, has been elected to succeed him.”  The "pending absence" was due to Turnure’s volunteering with the American Red Cross.  He served left for France where he served as Deputy Chief of the Advance Field Section.

George Evans Turnure, Jr. was already there.  In 1917, after three months studying at Harvard, he left school to serve first in the French Foreign Legion; and then as an aviator in the United States Army.  On October 22, 1917 The Times reported that he “brought down a German biplane Wednesday in the neighborhood of Furnes, Belgium.”  The newspaper noted “Turnure has just reached the age of 21.”

Young George Evans Turnure, Jr. would go on to be awarded the Croix de Guerre and the Legion de Honneur before returning to the East 36th Street house.

In the meantime, Elizabeth Fenno was active with the Red Cross here at home.   The Fennos owned what The Times called a “splendid villa on Cliffwood Street at Lenox” and had two children.  Tragically, Allen Blanchard Fenno contracted pneumonia and died in September 1918.

On September 24, 1920 Elizabeth was remarried in the drawing room of her parent’s Lenox estate.  Her new husband, George Kirchway Livermore, like her brother and father, had served in France.  As Captain in the 167th Artillery he had served two years there.  A graduate of Yale, he was now with the Federal Insurance Company in Boston.  The couple, along with Elizabeth’s two children, lived in the 36th Street house with her parents on their extended stays in New York.

Three months later George, Jr. contracted pneumonia.  He suddenly at the age of 24 on December 19, 1920.  The New York Times, in reporting on his death, noted "Mr. Turnure…made a brilliant record as an aviator in the Lafayette Escadrille and later with the American Army."  His funeral was held in Grace Church.

George Evans Turnure died on Christmas night 1933 at the age of 77.  His gross estate was valued at around $1 million—a significant Depression Era sum more in the neighborhood of $18.3 million today.

Exactly two years later, on Christmas day 1935, Elizabeth Lanier Turnure died in the 36th Street house at the age of 65.  She had suffered from a cardiac ailment for about six months.  On June 5, 1936 the house was sold to operators Joseph L. Ennis & Co.  They resold it two months later to another investor.

The exterior details were slightly toned down at the time.  The window hoods were altered as, it appears, were some of the ornamentation of the entry.  The plain, scrolled brackets, for instance, are out of context when compared to the foliate keystone.

In 1953 the once-grand home was converted to two apartments per floor.  A subsequent renovation in 1969 resulted in just one apartment in the basement and parlor floors.

When the parlor floor apartment became available for $1.5 million in 2015, real estate agents touted it as “once the private home of Jackie Kennedy’s father, John Bouvier III.”   If Bouvier, who lived and died at No. 125 East 74th Street, ever spent time here, it was a quick stay.

The wide Turnure house has suffered some abuse including a thin coat of chocolate-covered stucco over the brownstone.  But its elegance has survived from a time when this block was lined with the private homes of Murray Hill’s wealthy.

non-credited photographs by the author
Posted by Tom Miller at 2:20 AM