The Grace Church wedding of Ethel Iselin and Frederic Grosvenor Goodridge on June 3, 1901 was a notable social event.  The bride had an impressive pedigree; a descendant of three Colonial period families—Morris, Gouverneur and Philipse.   Dr. Goodridge, who had just been graduated from the College of Physicians and Surgeons at Columbia University, belonged to a socially prominent family, as well.


The guests sat among a virtual forest of rose trees that filled the sides of the chancel and lined the nave from the altar a third of the way to the entrance doors.  A month later the newly-weds left on a world cruise.


Goodridge was a busy man.  Not only did he fill his schedule with his medical work, including writing and instructing, he joined Commander Robert E. Peary on one of his early expeditions to Labrador.

The couple would have four children; and in 1910, they planned an larger mansion to accommodate their family.  The commission went to architects Foster, Gade & Graham, who were given an ample 36-foot wide site to work.  Two narrow brownstones at Nos. 122 and 124 East 78th Street were demolished to make way for the new residence.

Construction began in 1911 and was finished a  year later.  The resulting five-story neo-Georgian mansion of red brick and limestone was striking, mostly due to the three massive arched openings at the ground floor.  Georgian detailing like splayed lintels, carved panels and iron balconettes produced a refined and imposing structure.  Inside were nine master rooms, seven servants’ rooms, ten baths and an elevator.


By the time the family moved in, Frederic Goodridge had essentially retired from his hands-on medical practice.  In 1912 he mentioned in the Fourth Report of Harvard College, “During the last three years I have been engaged in research work in physiological chemistry, and have recently been made an associate in that subject at the College of Physicians and Surgeons of Columbia University.”

Ethel Goodridge was well-known for her lavish entertainments; but the dinner parties and dances would become less carefree when the country entered World War I.  Frederic left East 78th Street to see active duty as an officer of the 5th Division, not returning until after the war.


With her husband away and social events in New York City subdued, Mrs. Goodridge withdrew with the children to their 5,000-acre country estate in Pomfret, Connecticut.   She leased the house, filled with Colonial silver and exquisite artworks, to Vincent Astor in 1916 for the winter season.


From here Helen Astor continued her work toward social reform.  She hosted a series of “social welfare luncheons” in the home.   Manhattan's wealthiest socialites gathered to hear speakers discuss subjects such as immigration and nationalization, and unemployment.


Helen Astor’s luncheons were business affairs--a contrast to the polite social teas or receptions in many of New York's drawing rooms.  Discussions were encouraged, ideas aired and action committees organized.  Following the February 8 meeting concerning immigrants, The New York Times noted that education was of extreme importance to the group and “plans were discussed for forming a national council of all agencies concerned in the work of making American citizens.”


When Frederic Grosvenor Goodridge returned in 1919, having left the military with the rank of Major, the house was put up for sale and the family left New York City for good.  Eleven years later the retired doctor would be found in the woods two miles from his mansion in Connecticut, shot through the heart with his own hunting rifle.


Colonel De Lancey Kountze purchased No. 122 East 78th Street.   Like the Goodridges, The Colonel and his wife filled the mansion with American antiques, appropriate to the Georgian-style residence.  Among the items was a desk that once belonged to George Washington in Mount Vernon.

A war veteran, Kountz entertained distinguished military figures in the home--none, perhaps, more prominent than Ferdinand Foch, Marshal of France and Allied Supreme Commander during World War I.   Twice during his 1921 visit to the United States  was the Kountzes' house guest.


On November 18 the New York Tribune noted that “When Marshal Foch arrives here at 11 a.m. he will be taken to the home of Mr. Kountze, at 122 East Seventy-eighth Street, where he will receive newspaper men.  He will also receive a delegation from the Salvation Army, headed by Commander Booth, and other organizations.”


Later, General Joseph Jacques Cesaire Joffre would be a house guest.  The general was most remembered for his defeat of the Germans at the First Battle of the Marne in 1914.


The Kountzes would remain at  No. 122 East 78th Street for five years.  They rented the house for the season of 1923-24 to Guy Cary, an attorney with the firm Sherman & Sterling; then sold it on February 1924.  At the time of the sale, The New York Times remarked that “The house is of the Colonial type, and is considered one of the finest houses in the Park Avenue section.”


Stock Broker Henry Rogers Winthrop would own the residence for two decades.  But the Winthrops leased it for years after they completed their new home next door, at No. 120.  Their final tenant was Mrs. Nathalia Collver in 1944, who leased it for her exclusive and private Collver School.


Renovations, completed in January 1945, resulted in one classroom on the first floor, two on the second floor, and one apartment each on the top three floors.  These were most likely for staff, including no doubt Nathalia Collver.  The record made special note “No sleeping accommodation for pupils.”


The school would exist in the house only for two years.  On December 30, 1946 The Times announced that Henry Rogers Winthrop had sold the house to A. G. Rowes & Co.   The firm confirmed its plans to remodel the town house “into small apartments.”


By 1948 the renovations were completed and doctors’ offices shared space with apartments on the first two floors, with four apartments each on the upper stories.  Department of Buildings records noted that the apartments were for the doctors. 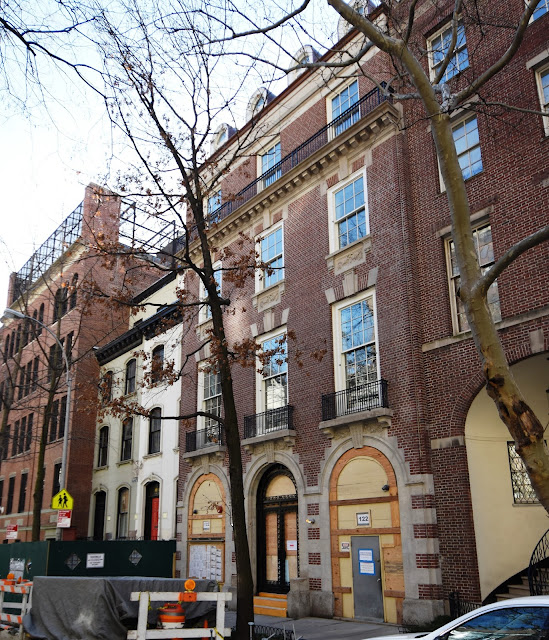 In 2010 the ambitious project of restoring the Goodrich mansion to a single-family home was begun.  Still ongoing six years later, the striking house awaits its rebirth as the luxurious residence it was a century earlier.