In 1826, as Greenwich Village experienced a building boom, John Pollock erected his two-and-a-half story brick house on the corner of Art and Gay Streets.  By the time Isaac A. Lawrence lived here, Art Street had been renamed Waverley Place in honor of Sir Walter Scott and his novel Waverley.

Lawrence, a grocer, and his family had moved in by 1841.  Since no separate business address is listed in city directories, it is probable that it was he who first converted the ground floor for business.   Another renovation occurred before 1854, most likely done by Henry Breckell, who listed both his grocery store and home address at No. 141 Waverley Place.

On July 25, 1853 The New York Times ran an article which prompted more questions than answers.  “Information was received last evening, at the Coroner’s office, that a female died very suddenly at No 141 Waverly-place, from some cause unknown to those residing in the house.”  Coroner Gamble promised an investigation the following morning.

No. 141 Waverley Place was purchased by another grocer, Henry Luhrs.  He raised the building to four full floors in 1860, and added a rear extension, numbered No. 7 Gay Street.  Luhr and his wife occupied the commodious upper floors above the grocery store; while No. 7 contained income-producing tenement apartments.  Especially handsome cast iron balconies, most likely always used as fire escapes because of their otherwise unusual depth, projected from the tenement façade.

In 1861, the year after the ambitious project was completed, a baby boy was born to the Luhrs in the Waverley Place home.

Although the tenement portion carried only the address of No. 7 Gay Street, there were two entrances; the door nearer to Waverley Place would later earn its own address, No. 5.  The apartments were apparently “floor-throughs;” for on July 10, 1869 an advertisement in The Sun offered “A floor with water and gas, just papered and cleaned.”

A month earlier one resident had met with violence a block away at the corner of Christopher Street.  Patrick Clifford got into a quarrel with Edward Fleming on June 12.  It worsened to the point of blows.  The New York Times reported that “During the brief struggle Clifford caught his foot in a grating on the sidewalk, and fell or was pushed over, sustaining a compound fracture of the leg.”

While Clifford lay in the street severely injured, Fleming and two other men “brutally kicked and beat him on the head.”   His assailants ran away, leaving him on the pavement.

Patrick Clifford was taken to his Gay Street apartment where a doctor treated his serious leg wound.  But the brutal beating resulted in his death in his rooms late on Wednesday night, July 30.  The following day Dr. John Beach made a “post-mortem examination” (what would be called an autopsy today) prior to an inquest.

The inquest was held in the Gay Street apartment “over the body of Patrick Clifford.”  Neighbors and friends were no doubt shocked when they read that Edward Fleming was released from jail.  The New York Times reported that “the deceased and Fleming did not quarrel, but were wrestling in a friendly way, when Clifford was thrown, and had an ankle sprained.”

The inquest jury did not expound on how a sprained ankle resulted in the man's death.

The Gay Street tenants were working class.  Matthew T. Johnson was a machinist with a shop on the corner of Franklin and Centre Streets; and R. G. Gregg had a furniture store, for instance.

In the meantime the Luhrs children had grown up; but all three remained in the Waverley Place home.  Louis C. Luhrs operated his real estate business from here by 1882; and John L. was still in the house in 1888, as was their sister and her husband, John A. Rosenbaum.  Rosenbaum was a butter and cheese merchant with an office at No. 310 Washington Street.

On the night of September 19, 1888 John Rosenbaum and John Luhrs were returning home when they encountered Patrolman Richard Barry of the Charles Street Station.   Earlier that evening, according to The Evening World, “Barry got drunk…and insulted Detective Mangin, Patrolman O’Donnell and his brother, Tim O’Donnell, whom he met on the street.”   Luhr and Rosenbaum, perhaps, did not recognize Barry’s volatile condition when they challenged him.

Officer Barry, who had been on the force for only a month, confronted the men just outside No. 141 Waverley and ordered them to move away.  According to Barrry later, Luhrs replied “that he would when he got ready.”  It was an ill-advised comment.  The Evening World reported on September 21 that “Barry was in a towering rage, if not half drunk, and kept the neighborhood in an uproar for several hours.”

Within second John Luhrs was being clubbed.  Three neighbors, two women and a man, rushed to the scene.   William Jackson said that Barry taunted Luhrs “to talk back, so he could carry him to the station-house on a stretcher.”  When Mrs. Ellis and Mrs. M. Hexter tried to intervene the officer “used insulting and indecent language to the women,” according to later testimony.

Hearing the commotion as his son and son-in-law were being clubbed below his windows, Henry Luhrs joined the skirmish.   Father and son ended up being arrested.  Badly battered, John Luhrs was charged with disorderly conduct, as was Henry.

The episode resulted in a flurry of complaints against Officer Richard Barry.  Rosenbaum and the three witnesses appeared before Superintendent Murray to issue complaints.  On September 21, 1888 The Evening World ran a headline that read “Piling Complaints On Barry--The New Charles Street Policeman Has a Hard Row to Hoe” and the article advised that any one of the four complaints, “if proven, will be sufficient to break him.”

The following day The Sun reported that Henry Luhrs had been discharged by Justice Ford at the Jefferson Market Court.  “Luhrs hadn’t been doing anything, but the policeman was on a rampage.”

The grocery store of Henry Luhrs was gone by 1890; although the family continued to reside upstairs.  That year Henry Korff ran his business from No. 141 Waverley Street and paid $175 to the city for the privilege of parking his truck on the street “during the nighttime only.”

John H. Luhrs had ambitious plans for the aging buildings in May 1892 when he commissioned architect E. L. Angell to design “three five-story flats” on the property.  It may have been the weakening economy that culminated in the Financial Panic of 1893 that halted the plans; but the project never got off the ground.

The lives of the Luhrs’ working class tenants were often not serene.  George Flanagan and his pregnant wife lived here in 1893.  Flanagan was an engineer (a term equivalent to an apartment maintenance man today) at Waverly Place and Greene Street.  Fond of drink, he failed to come home for several days that July, prompting his wife to search for him.

On July 24 she went to his place of employment and found him passed out, drunk.  When she woke him up and tried to get him to come home, he called a policeman and insisted he did not know the annoying woman.  Officer Seaman ordered Mrs. Flanagan to leave; but, intent on getting her husband home, she refused.

Not wanting to use the impolite term “pregnant,” The Evening World noted “Mrs. Flanagan is in a delicate condition.”  The following day the woman appeared at Police Headquarters complaining “that she had been clubbed yesterday by Policeman Seaman.”  According to Mrs. Flanagan, when she did not obey his orders, “the policeman kicked her and struck her with his club.”

According to The Times, she promised that a witness would give evidence against him at a hearing.

Resident John Cummings, a "truckman," stabled his horses with Lawrence Mulry at No. 10 Christopher Street at the end of the block.  On the night of May 3, 1896 the three-story stable caught on fire.  Hay and other flammable materials caused the blaze to rage rapidly through the structure.  Before fire fighters could attack the inferno, August Frederick Winberg who lived in the loft was dead, two horses were burned to death and two more were so badly injured they had to be shot.  The Times reported the following day that Cummings’s two horses had been “dragged out, badly burned.”

By 1897 John Laible ran his grocery store at No. 141 Waverly Place (by now Waverley had lost its second “e”).    He would remain here into the first years of the 20th century.

A disturbing incident occurred in the apartment of the Peter Dunn family on July 2, 1906.   Dunn was over 70 years old at the time and blind.  His 30-year old son John came home drunk that night; and the New-York Tribune reported that “He refused to go to bed, and awakened the other members of the Dunn family by shouting in the flat.”

When Peter tried to reason with his son, “the younger man reviled his father with taunts and curses.”  Finally John grabbed his blind father by the waist and thrust him out their third floor window.  A policeman heard Peter’s calls as he hung from the window.

The Tribune reported “The old man clung by his hands until a policeman broke in the door and clubbed young Dolan [sic] into submission, taking him to the police station.”  Peter Dunn was rescued and his son was sentenced the following afternoon to six months on Blackwell’s Island.

But not everything was dreadful in the tenement apartments.  In 1914 The Evening World held a contest for the “brightest, bonniest, and best” of New York City’s babies.  It culminated on Mother-and-Baby Day, June 25, with a Fifth Avenue parade that started at Washington Square.  Various organizations and institutions held their sub-contests to pick entrants; thereby culling down the newspaper’s otherwise massive amount of submissions.  No. 7 Gay Street resident Mrs. Robert Berry entered her 13-month old son Robert in the Greenwich Settlement House content.  The boy won first prize.

Rather surprisingly Louis C. Luhrs still lived in the family home in 1933 when he retired from the real estate business.   When the Great Depression hit, he had sold his summer estate, the upstate “farm” formerly owned by popular stage actor Joseph Jefferson.  Now he daily traveled to Central Park to relax and spend time with “other well-to-do” older men who gathered there.    In 1932 he had told a reporter from The New York Times that he was pleased that the Park had remained essentially unchanged since the days when he drove his carriage through its rambling drives.

In 1948 Louis C. Luhrs died in the bedroom where he had been born in 1861.  When No. 141 and Nos. 5 and 7 Gay Street were sold in October 1955, the buyers K. M. T. Realties announced “plans for remodeling.”  The old tenement apartments were renovated, resulting in two each on the upper floors. 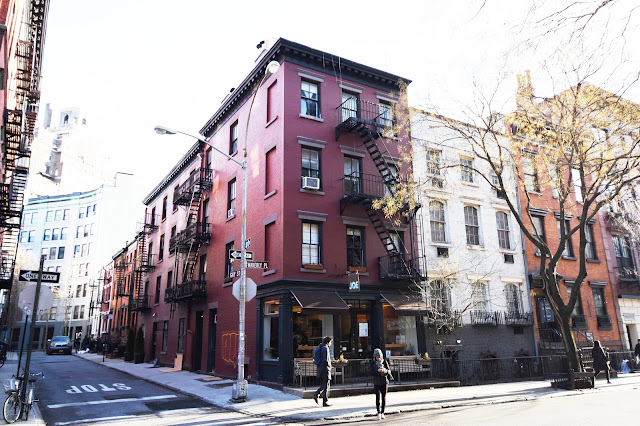 Another updating was completed in 1988.  However little changed outwardly.  Henry Beckell’s 1850s storefront is intact and the Waverly Place building looks much as it did when Henry Luhrs added the top two floors in 1860.  And on Gay Street, the magnificent cast iron fire escapes still catch the eye.

photographs by the author
many thanks to Robert Susser for requesting this post
Posted by Tom Miller at 3:05 AM