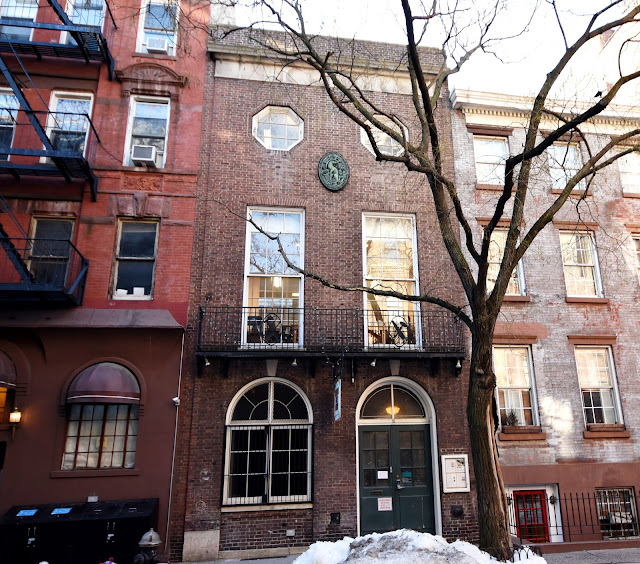 Prior to the end of the 19th century, parts of Greenwich Village had changed from bucolic charm to squalid tenement life.  Immigrants poured into the district until Greenwich Village had the densest population in Manhattan.  Simultaneously, the Settlement House Movement was taking form.  It was based on the concept that the lives of the poor would be bettered not by charity; but by instructing them in income-producing skills, in health care, and homemaking.

Mary Kingsbury Simkhovitch graduated from Boston University in 1890 and immediately threw herself into social reform.  Recruiting the help of other reformers like Carl Schurz, Felix Adler and Jacob Riis (whose stark photographs of slum life and tenement interiors startled the nation), she founded Greenwich House.  With the immediate goal of improving the lives of the impoverished Greenwich Village immigrant population, it opened on Thanksgiving Day 1902 in a renovated brick house at No. 26 Jones Street.

It was one of a row of Greek Revival homes built in the early 1840s as comfortable residences.  When the new Greenwich House took it over, the houses had been converted to tenements.

The House offered free instruction to women on housekeeping, lace making, reading, language, and other areas that would help them improve their own lives.  All the while Simkhovitch worked to reduce the appalling infant mortality rate.  And she relentlessly fought for playgrounds, sanitation, child labor laws and overall improved living conditions.  Within the first year the Greenwich House's Social Investigation Committee published The Tenant's Manual, the first guide to tenants' rights and tenement law.

In 1909 Greenwich House added pottery making to its curriculum.  It was no frivolous arts-and-crafts recreation.  Art pottery was a major trend and while companies like Rookwood, Roseville and Weller produced large amounts of commercial pottery; the studio art pottery movement was growing roots.  An accomplished potter could earn a comfortable livelihood.

The success of Greenwich House led to its new expansive building on Barrow Street, designed by Delano & Aldrich and opened in 1917.   But a decade later space here was already overtaxed.  Mary K. Simkhovitch, still its director, nudged millionaires to donate to the construction of an annex building on Jones Street.  Among the contributors were Greenwich House Treasurer Marshall Field and, most significantly, John D. Rockefeller, Sr., who wrote a check for $10,000.

Greenwich House already owned the “four story front and rear tenements” at No. 16 Jones Street.  The old house was demolished and the rear building was rented to Camilla Mason and Maude Robinson, both House potters.  It is not surprising that Delano & Aldrich were called back.  Chester Aldrich was highly involved in social reform and was a member of the Greenwich House board.

The cornerstone for the Jones Street building was laid on June 27, 1928 by Marshall Field.  The building would be devoted “to stone, wood and iron shops for training youngsters in the art trades.”   Its purpose was reflected in the list of speakers, including Chester Aldrich, Leo Calarco of the Wood Carvers’ Guild (he had graduated from the Greenwich House workshops, himself), sculptor Victor Salvatore, and master cabinetmaker Nicola Famigletti.  Famigletti addressed the group in Italian; but his lack of English skills was not a problem for the boys learning woodworking since most were Italian.

The New York Times reported that in his remarks Marshall Field “predicted that another Raphael, or some one who might become world famous, would receive his apprenticeship at Greenwich House.”

Completed within the year, the chaste Colonial Revival annex was a visual off-shoot of the Barrow Street building. Faced in Flemish-bond brown-red brick; its arched openings at the first floor and the tall windows and balcony at the second echoed Greenwich House.   The sedate façade gave little hint of the active industrial classes that would take place within.

The stone-cutting and woodworking classes had proved so successful during their seven-year history that in 1930 Marshall Field donated a foundry at No. 16 Jones Street for bronze and metal work.   A year later, on February 8, 1931, The Times commented on the work being done here.

“An effort to counteract the machine-made art of the present and to revive the old craftsmanship of the Middle Ages is being carried on by the Greenwich House Workshops at 16 Jones Street.  There, under the 500-year-old apprenticeship system as it was practiced by Michelangelo and other masters, youths are trained in the arts of stone-cutting wood-carving, cabinet-making and bronze work.”

Because architects and decorators placed orders for the custom-made items, students paid for their training only through labor.  New students—apprentices—helped the senior apprentices and “masters” until their skills earned them a higher spot on the chain.  An arrangement with the public schools allowed the mostly impoverished boys to attend school in the mornings and classes here in the afternoons.

The Workshops offered the boys a means to escape the grueling and dead-end fates otherwise destined for them.  The Times noted “One boy, working in a mine in Pennsylvania, read of the Workshops, saved $35 in order to pay his way to New York, and arrived here penniless.”

Pottery and ceramic work were still being taught in the main building on Barrow Street.  But the sales of these goods helped maintain the Jones Street facility.

But by now the Great Depression was taking its toll on Greenwich House.  The Times noted later, “Before the depression forced Greenwich House to curtail some of its activities, the [Jones Street] building was largely maintained by sales of its pottery and ceramic art and its woodcarvings and cabinet work.”   Now money the public had spent on household decorations was being spent on necessities like food and clothing.

In 1936 Mary K. Simkhovitch and the directors leased the Workshop to the City at $1 a year on a five-year trial.  The school was made part of the School of Industrial Art under the Public School system.  The New York Times explained that at the end of the trial “the educational authorities will decide whether it is to continue.”  Mary K. Simkhovitch, still involved, insisted “Why should we have to send abroad to get the decorative panels and rich reliefs for our cathedrals?  Why not train the boys to do that right here?”

In 1938 there were 48 boys attending classes.  The Board of Education insisted that there was no prejudice against admitting girls, but that “none has yet applied.”   As was the case previously, the boys’ handiwork was offered for sale, with the proceeds now going back to the school for the purchase of tools, materials and equipment.  One instructor told reporters “One piece may bring as much as $250, while it is not unusual to receive $150 or more for a sculptured bear or a hand-turned chair.” 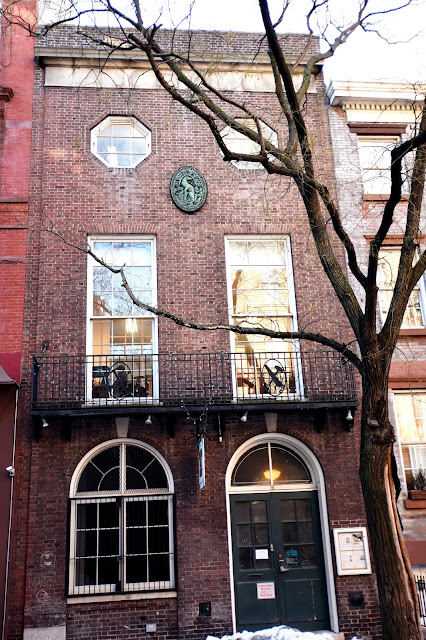 In 1941 the trial period was over and the Board of Education, disappointed in the results, decided to shut down the endeavor.  For seven years the Jones Street building was used as a branch of the New York Public Library.  But then, on October 7, 1948, it was reopened by Greenwich House.  As the economy resurged, so did the interest in the workshops.

Not all the old classes, like bronze-making for instance, would return.  But several new areas were added.  The pottery school moved from Barrow Street into the building and The Times reported “The woodcarving and cabinetmaking shops, discontinued when the building was transferred, are functioning again, and the art classes and workshops of the theatre and dance that had interim housing in the main building are back too.”

The building was outfitted with two large pottery studios, a firing room and drying room.  Children (from 8 to 12), teenagers and adults were offered courses in pottery making, ceramic sculpture, mold making and design.

Nicola Famigletti was back as well, teaching wood carving.  Examples of the work his former students had produced lined the walls.  The astounding quality of the pieces was reflected in the patrons.  The Times noted “Among the objects produced by them and sold were frames for paintings in the Metropolitan Museum and in the Whitney, religious carvings for churches, and furniture and fences for individuals.”

As the years passed, the industrial classes gave way to the highly-popular pottery until No. 16 Jones Street was entirely devoted to the craft.  In 1952, when the well-known Inwood Pottery Studios was threatened with closing, Gabriella Maria Le Prince convinced Greenwich House to perpetuate it.  The studio’s kilns and raw materials were installed at No. 16 Jones Street.  The following year Gabriella Le Prince died.

Throughout the decades the Greenwich House Pottery’s regular exhibitions and sales were highly-anticipated and attended.  The Jane Hartsook Gallery was installed for the purpose, named in honor of the former Pottery Director who had made the school “one of the nation’s leading ceramic arts studios,” as described in her Alfred University obituary.

Hidden away on the block-long Jones Street, Delano & Aldrich’s jewel is easily bypassed by anyone not specifically looking for it.  Little changed externally, it is a reminder of a remarkable period in Greenwich Village history, when the sons of impoverished immigrants struggled to get a new start.