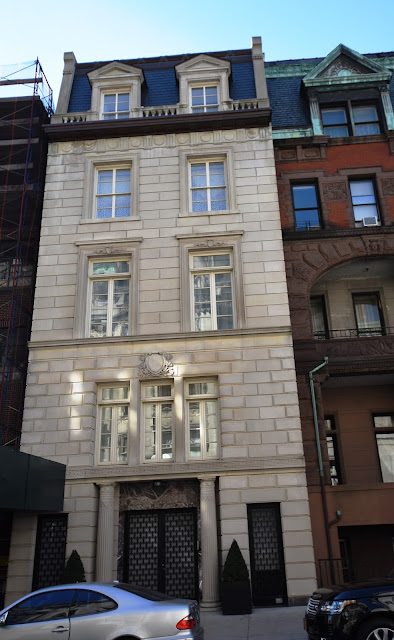 In 1886 upscale residences were creeping up Fifth Avenue as far north as 78th Street.  Edward and Amanda Lauterbach owned the properties at Nos. 2 through 8 East 78th Street, just steps from Central Park.   They sold No. 6 to Louis M. Hornthal and his wife and in January 14, 1887 architect Alfred Zucker filed plans for a “four-story brick and brown sandstone” dwelling with mansard roof.  The upscale, 26-foot wide home carried a projected cost of $75,000—just under $2 million in 2016.

In the meantime, the Lauterbachs erected their own lavish home at No. 2 East 78th Street.  On January 7, 1888 the Real Estate Record &  Builders’ Guide published an article entitled “Prominent Buildings Erected During 1887.”   It noted, in part, “Some private residences of importance will also be noticed amongst the list, such as those of I. V. Brokaw, Amanda F. Lauterbach, W. A. Mathesius, Carrie Hornthal and Chas. A. Stein.”

As noted in the article, Louis Hornthal had placed the title for No. 6 in his wife’s name.  The practice ensured that the 19th century women were financially secure in the event of their husbands’ death.

Hornthal was a partner in the apparel manufacturing firm Hornthal, Weissman & Co.  He was also a trustee of Grammar School No. 70, not far away on East 75th Street.  In 1892 he and the other trustees fired the 55-year old principal, Louisa M. Galligan, after teachers accused her of incompetency, conduct unbecoming a lady and generally making their lives miserable.

Louisa Galligan turned the tables on Louis Hornthal, suing him for $50,000 for libel and slander.  When her suit failed, she pressed on.  In 1894 she sued him and the other trustees for $25,000.   During the bizarre trial, the New-York Tribune reported “She had no lawyer but her son, a youth of nineteen.  He tried to examine her, but was so unacquainted with the law that most of his questions were ruled out.”  Her case was dismissed.

Like many wealthy couples, the Hornthals were active in charitable causes.  Carrie was on the Board of Managers of the Mt. Sinai Training School for Misses.  Following graduation exercises on May 22, 1890, The Sun noted “Mr. Louis M. Hornthal has been in the habit of presenting to the graduate whose ward had been most neatly kept a solid silver badge."  The fortunate young lady this year was Miss Delia Jones of Catskill.”

On Thursday, June 21, 1894, Carrie Hornthal died at the age of 45.  The funeral was held in the 78th Street house the following Sunday morning.   Within two weeks Louis Hornthal abandoned the house he had built with his wife.  On July 4 The New York Times reported that the residence had been sold for $125,000.

The house became home to Stephen Baker, President of the Bank of the Manhattan Company.  He and his family summered at their country estate at Lawrence, Long Island.   Among the social events on 78th Street hosted by the Bakers was a dinner in honor of British physician, Dr. Winfrid T. Grenfell.   Recognized for his Settlement work, he was known as the “missionary of the deep-sea fishermen” for his outreach in Labrador.

In the first decade of the 20th century, high-stooped rowhouses had fallen from favor.  Wealthy New Yorkers purchased the out-of-date residences and drastically remodeled them, or simply razed and replaced them with modern homes.   When Artemus Ward and his wife, the former Rebecca Dunwoody Robinson, purchased No. 6 and the house next door at No. 8, the Bakers had relocated to No. 8 East 75th Street.

Ward commissioned John H. Duncan to design a grand home to replace the two old houses.   Construction began in 1913 and was completed the following year.   The elegant, limestone-clad mansion was imperiously reserved.  The central double-door entrance was flanked by two graceful fluted columns with dripping Edwardian detailing.  Service entrances on either side led to the basement and to the servant areas.  An especially handsome stylized Greek key course separated the ground and second floors. 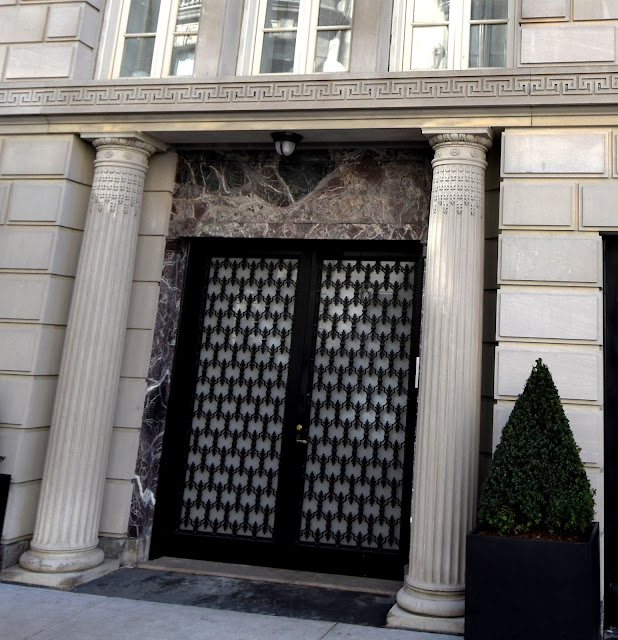 Duncan’s understated treatment of the façade included a grouping of openings on the second floor below a blank cartouche surrounded by carved oak leaves and acorns.  The third floor windows were decorated with delicate shields and ribbons, and a dormered mansard behind a stone balustrade completed the French neo-Classical design.

Ward had been an advertising executive with Enoch Morgan’s Sons, a soap manufacturer.  In 1910 he co-founded the firm Ward & Gow.  By the time he purchased the 78th Street property he was the sole partner, having bought out his partner.  The Wards’ summer estate was on Shelter Island, New York.

Ward added to his large fortune by obtaining a monopoly on newsstands on the elevated train and subway platforms.  His contract with the Interborough Rapid Transit give him exclusive rights “to sell newspapers, magazines, flowers, books, confectionery, and other articles usually sold in stationery stores, but not cigars, tobacco, fruits, or nuts.”  He also had the right to check parcels, and operate “automatic chewing gum, chocolate, and candy machines, as well as weighing machines.”

The monopolistic arrangement did not sit well with publishers and manufacturers.  While Ward paid dearly for the concessions--$600,000 in 1914—so did his suppliers.  He charged publishers $15 a month for every subway and elevated station where their magazines were sold.  They also protested against his despotic rulings on what publications were handled.

Such was the case with Public Weal Publishing Company, publishers of the weekly magazine Fair Play, in January 1912.   One issue contained an article by Nellie Bly entitle “How I Was Robbed of Two Million Dollars.”   The magazine was placed in the newsstands late Thursday night, January 18; but was pulled around 2:00 the following afternoon.

Marcus Braun, editor, received a letter from Ward & Gow “declaring that as the article treated of a matter which was objectionable, and further contained the possibility of a libel, they did not care to take the responsibility of handing it.”  The New York Times remarked “Artemas Ward, head of the firm, refused last night to say who had brought the article to his notice.”

Ward’s firm became Artemas Ward, Inc. following a lawsuit by his former partner over the use of his name.  When Ward was not defending himself in court, which was often, he was filling his 78th Street mansion with Americana.

He was an authority on documents, especially those related to the American Revolution and the early history of central Massachusetts.  His ancestors included William Ward, who had helped found Sudbury, Massachusetts in 1638.  He published The Life of Artemas Ward, the first Commander in Chief of the Revolution and The William Ward Genealogy.

Ward’s other varied business interests included Chairman of the Board of the Ideal Cocoa & Chocolate Company, Chairman of the Board of the Turkey Knob Orchard, Inc.; and Presidencies of the Broad Acres Dairy Farms, Southeastern Farms, the Leonia Heights Land Company.   It was most likely his involvement with the food and farm concerns that led to his writing The Grocer’s Encyclopedia in 1911 and The Encyclopedia of Food in 1923.

Generous with his vast wealth, Ward erected a library building in Shrewsbury, Massachusetts, including the books to fill it.  He maintained the General Ward homestead there as a house museum.  But his greatest focus was on the needy and the infirm.

He founded the Hospital of Hope in a former mansion at 158th Street and Mott Avenue.  The institution, which could house 300 crippled men at any time, taught them trades.

His ongoing philanthropies were evidenced on December 17, 1921 when The New York Times reported “A gift of $4,000 was made to the Hundred Neediest Cases yesterday by Armetas Ward…He sent $1000 each to the Association for Improving the Conditions of the Poor, the Charity Organization Society, the Brooklyn Bureau of Charities and the State Charities Aid Association.”  The newspaper noted “For several years Mr. Ward has made an annual gift of $4,000 for the Hundred Neediest Cases, this being the largest amount they ever have received in any one year from an individual contributor.”

Rebecca Ward had died by the winter of 1925 when Ward’s health began to fail.  His niece, Martina T. Robinson, was living with him at the time.  He developed pneumonia and on March 14 he died in the 78th Street mansion.  He was 76 years old.

Of Ward’s substantial estate, his son, Artemas Ward, Jr. received $1 million.  The great bulk of the estate went to Harvard, prompting The New York Times to remark that the university “will profit by every cent dropped into the chocolate and gum penny-in-the-slot machines and into the weighing machines in the Interborough subway and elevated stations.”

He did not forget his domestic staff, however.  To each of the 12 servants in the Shelter Island estate he gave $1,000 “except in the cast of Captain George B. Wells” who received $2,000.  It was a tidy windfall for the staff, the lesser amount equal to about $14,000 today.

The mansion on 78th Street became home to the family of Dr. Reginald Burbank.  The doctor and his wife, the former Kathryn Poole, had a son, Reginald, Jr. and two daughters, Marion and Margaret.   Their summer estate was in western Massachusetts.

The family was little affected by the Great Depression.  It was a fortunate circumstance for Burbank, for the social expectations associated with bringing up two privileged daughters were high.  And expensive.

In 1936 Marion Burbank was introduced to society.  She hosted her own tea that fall “for members of the debutante and junior committee” who were aiding in the sale of tickets for a fund-raiser.  The All-Star Amateur Boxing Tournament in Madison Square Garden was for the benefit of a hospital.

Although Marion was officially introduced at a reception on Thanksgiving Day afternoon, the entertainments continued into 1937.  On January 2 her parents gave a dinner in her honor in the Corinthian Room of the Pierre Hotel, and on April 3 they hosted a supper dance in the house.

The year 1942 must have proved socially hectic for Kathryn.  On February 12 Marion was married to John Walker McNeely in the chapel of the Church of the Heavenly Rest.  Seven months later Margaret’s engagement to Army Lt. Arthur Curtiss Welch was announced.  The New York Times reported that she, too, would be married in the Heavenly Rest chapel.

The Burbanks remained in the 78th Street house for decades.  When Kathryn’s brother, Dr. Mark K. Poole arrived as a house guest in July 1960, his visit to New York drew attention.   Poole had spent the last 24 years as a medical missionary in the Congo, the director of a 120-bed jungle hospital.  He had fled the war-torn country when guerillas attacked mission.

By the 1990s a cosmetology office was located in the house; but in 2006 advertising mogul Donny Deutsch purchased it for $21 million.  His $20 million gut renovation obliterated the Edwardian interiors, leaving only the landmarked façade intact.  His architect, Frederic Schwartz explained to Architectural Digest that Deutsch “wanted it to be sophisticated, spectacular, and over-the-top.”

A problem arose, however, when Deutch did not pay for the work.  In May 2012 Schwartz file for an extended lien against the property, saying he had never been paid his $1.79 million fee.   The contractor had also filed a lien, in 2010, claiming it was owed $40,250 for the work.  And the architectural renderer, Andrew Hickes, complained that he was never paid the $11,000 fee for illustration work on the renovation. 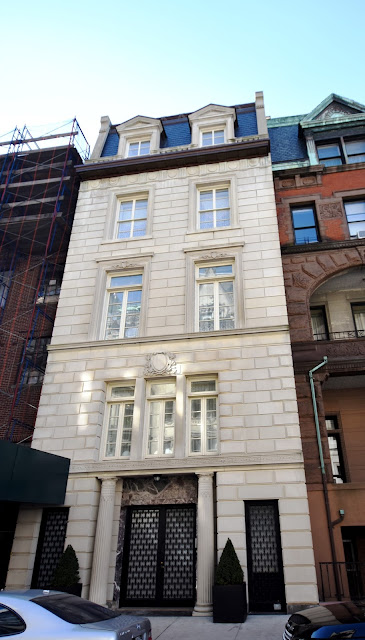 non-credited photographs by the author
Posted by Tom Miller at 2:53 AM