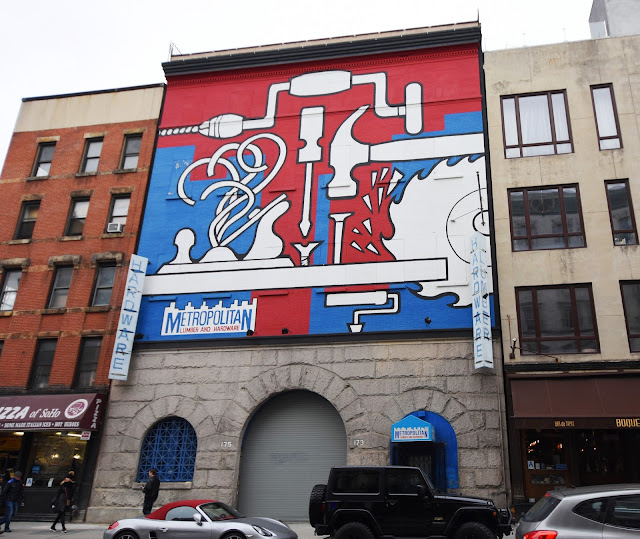 In 1900 August Belmont, Jr. and Andrew Onderdonk embarked on a massive project that would change the lives of New Yorkers forever.  Their Rapid Transit Construction Company (reorganized as the Interborough Rapid Transit Company in May 1902) obtained the rights to build an underground railroad system—Manhattan’s first subway.

But the trains that would run along the elevated and subterranean tracks would need electricity to power them along.  Powerhouses and substations with colossal generators had to be constructed.  And that meant that old buildings—entire blocks in the case of powerhouses—would have to go. 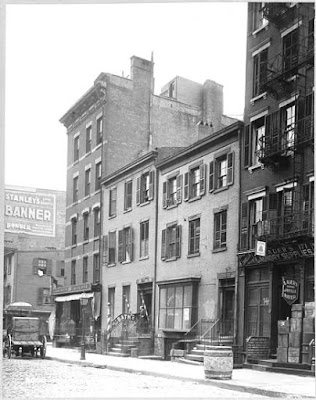 Brick houses had begun lining Spring Street, between Thompson Street and West Broadway, around 1818.  It was only a matter of 20 years or so before these homes were being converted to businesses.  In April 1841 P. Gregory & Son’s goods store at No. 175 Spring Street advertised its spring line of silks, linens and other fabrics.  Included was “the best assortment of Shirting and fine Linens ever offered…Astonishing Cheap.”

By the 1890s space in the house next door, at No. 173, was being used as the embroidery-making shop of Albert Schwab.  Albert found himself in trouble in 1894 when Augusta De Barenne, “a young French woman,” accused him of being annoying.

Schwab had left his wife in 1883 and come to New York from France with his two children.  Then in April of 1894 he met Augusta.  He proposed to her, she accepted, and he gave her $100 for a trousseau.  Instead, she spent the money “in fitting up a flat for herself.”  Then she broke off the engagement.

When Schwab wrote her a letter demanding his money back, she had him arrested for annoyance.  The judge agreed to dismiss the case if Schwab would “let the money go.”

As Schwab licked his romantic wounds, the old three-story houses at Nos. 173 and 175 Spring Street were about to fall victim to the 20th century.  In July 1901 George H. Pegram filed plans for the Manhattan Railway Company for three “electric power house sub-stations for its Sixth and Ninth Avenue elevated lines,” as reported in The New York Times on July 31.

“The sub-stations are to be used to transform the electric current generated at the company’s main power house at Seventy-fourth Street and the East River,” explained the newspaper.  Among the three projected structures was a “four-story brick sub-station at 173 to 175 Spring Street.”

George H. Pegram was more engineer than architect.  As Chief Engineer of the Metropolitan Railway Company, he was responsible for efficient operation of the massive facilities and machines.  A few months earlier, in January 1901, the Street Railway Journal noted “The plans of these buildings, as worked out by George H. Pegram…and his corps of able assistants, will undoubtedly produce buildings that will serve as models in sub-station construction.” 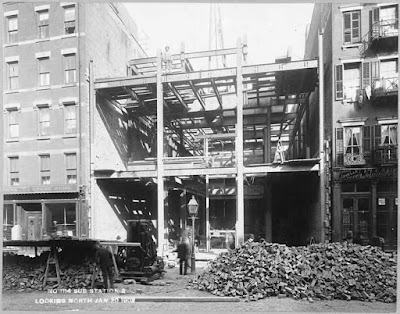 It is most likely Pegram’s engineer-first, architect-second status that resulted in the style of Sub Power Station 2 being about a decade late to the architectural party.  The beefy Romanesque Revival base of rough-cut stone blocks had passed from style by now—prompting many current-day architectural historians to erroneously place it in the 19th century.   Above, three stories of brick were punctured by regimented rows of square openings and capped by an understated cornice.  It was a pleasing and attractive face for an undisputedly utilitarian structure.

As long as the Sixth Avenue elevated train existed, Substation 2 would survive.  An assessment of the properties of the Manhattan Railway Company in January 1907 placed the value of Substation 2 at $5,500—a mere $143,000 in today’s dollars.

During the Great Depression merchants and property owners along Sixth Avenues continually complained to the city about the elevated train.  The tracks cast the avenue in perpetual shadow and the noise and vibrations of the passing trains lowered property values.  In response the first stage of the Sixth Avenue subway line was opened in 1936.

In 1938, as the subway construction continued (it would be fully opened in 1940), the City of New York purchased the Sixth Avenue Elevated from the Manhattan Railway Company’s bondholders for $12.5 million.  The El was closed on December 4, 1938 and demolished within the year.

With the Sixth Avenue El gone, Substation 2 had no purpose.  The arduous task of dismantling and removing the goliath equipment inside was undertaken, and the cavernous structure was recycled for business purposes.  In 1964 it was converted to a lumber store on the first floor and mezzanine.  Department of Buildings records noted that the upper floors were “to remain vacant.”

The Gem Lumber Company would play a role in a tragedy that would rivet the attention of Americans nationwide in 1979.  Six-year old Etan Patz left his Soho home for school at 8:00 on the morning of Friday, May 25.  Every other day he boarded a school bus two blocks away, at West Broadway and Prince Streets.  But that morning he was not there when the bus pulled up.

Two days later The New York Times reported “However, late Friday afternoon the boy was in a neighborhood lumber store, according to the store’s manager.”  Howard Belasco told investigators he noticed Etan and another boy at around 4:30 or 5:00.

“They were outside playing in a dumpster, pulling out scraps of lumber and then they came here and bought two boxes of nails,” he said.  “Then they went around back and took some more scraps, then they disappeared.”  Belasco identified Etan from the school photograph police were distributing in the area.

No trace was ever found of Etan Patz and his disappearance still haunts the minds of New Yorkers. 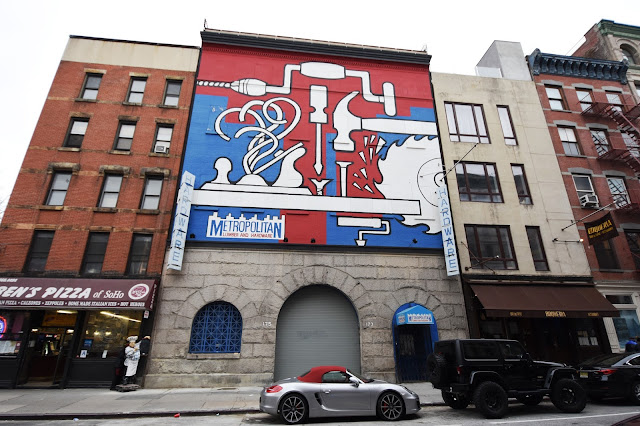 When Metropolitan Lumber and Hardware moved in, it painted a Soho-worthy mural on the upper floors.  The bold graphics became a Spring Street landmark.  The lumber store left in 2015, leaving the fate of the building and the mural in question.