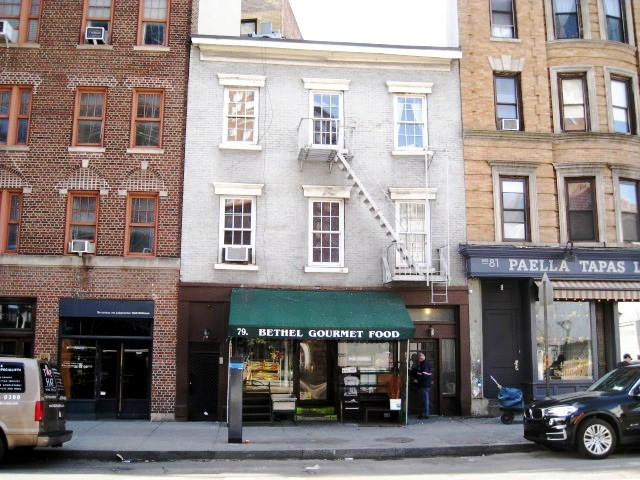 In 1840 mason George F. Brush constructed his family’s three-story brick-faced home at No. 79 Greenwich Avenue.  It stood on the northern rim of an expanding Greenwich Village.  The diagonally-positioned avenue followed the route of a former Indian path and drew the line between the eccentric roads of the Village and the rigidly geometrical scheme of streets and avenues created by the 1811 Commissioners’ Plan.

The ample, 25-foot wide house reflected its working class builder.  The straight-forward design included no unnecessary extras.  The brick was laid in common bond, simple stone sills steadied the openings, and a plain cornice capped it.

In the rear lot was a small house built for rental income.  In 1842 stable operator George Hyatt lived there.

Brush’s son, George P. Brush, was also a mason and worked with his father’s company, Rogers & Brush.  He would soon have his own house nearby, at No. 87 Greenwich Avenue.  While the Brushes lived relatively modestly, the success of the company was reflected in the bill they presented to the managers of the New-York Institution for the Blind in 1849.

Son George was still living at No. 87 when he lost a valuable item on July 10, 1851.  Within two days an advertisement appeared in the New-York Daily Tribune looking for a lost “memorandum book, belonging to George P. Brush; also a Letter directed to J. H. Cornell, Esq, containing a note for $1,000, at three months from July 5, signed Austin Sherman, and indorsed Rogers & Brush, and George P. Brush.”  The ad clearly admonished that “Payment is stopped” and promised that “Any one leaving the above with George P. Brush, 87 Greenwich-av., or 106 Nassau-st.; will be suitably rewarded.”

In the meantime, the Brush family rented rooms in the rear house.  In 1853 there were two roomers, William Merschoff, a bootmaker; and “carman” William Cahell.  In 1854 space was being rented to broker Thomas W. Ogden, whose office was at No. 50 Wall Street; in 1857 Michael Dunning, a porter, and Patrick Corley rented rooms; and in 1859 another mason, John Farrell, was here.  He also volunteered at the Guardian Engine Company’s firehouse on West 10th Street.

By the end of the Civil War his widow was still living in No. 79 and was teaching at Industrial School No. 8.  She was also one of three women in charge of the Housekeeping and Repairs department there.

By 1880 the Brush house had become the undertaking shop of Joseph Hanna.  It was here that many coroner’s inquests were held when the circumstances of death were deemed suspicious.  Such was the case with Mrs. Harriet Deutch, or Van Buren, as her fellow boarders knew her.

Harriet arrived at the boarding house of Mrs. Margaret Morgan at No. 234 West 11th Street in March 1880.  She was accompanied by a man named Deutch, who said he was her “agent.”  It was later discovered he was her former husband.  The two were married on November 2, 1876 and divorced on December 3 that same year “on the ground of incompatibility of temper.”

After boarding with Mrs. Morgan four days, Harriet complained of pain.  A doctor was sent for; but she refused to take the medicine he ordered.  After he left, she asked for tea and toast.  While it was being prepared, another boarder, Belle Montaine, check in on her.  She found Harriet unconscious on the bed.  Before Mrs. Morgan could get to the room, Harriet was dead.

A few minutes later, before Dr. Miller could return, Deutsch arrived and was told Harriet had died.  “He did not seem to be affected by the news, but went up to the room, looked at the dead woman, but made no remark,” reported The New York Times on April 2.  “He then left and returned 15 minutes later with a lady.  He brought her into the room, did not say a word to any one, and went out of the house.  This lady was Mrs. Brodhead, a cousin of the deceased.  Deutch did not return to the house.”

Because of the mysterious circumstances, an autopsy was performed on Harriet.  The coroner pointed to opium poisoning as the cause of death.  On April 1 a jury was sworn in at Joseph Hanna’s undertaking shop after which “they then formally viewed the remains of the unfortunate woman.”

The jury found no foul play involved in Harriet’s death; a decision that was strengthened by Deutch’s attorney testifying that “the deceased had been a confirmed opium-eater for eight years past.”

Joseph Hanna lived in the house where he ran his undertaking business.  He had been a volunteer firefighter in his younger years, and was a member of the Algonquin Gun Club, the Tough Club of the Ninth Ward, and a Mason.  By 1888 he leased space here to industrial photographers Picken & Co.  The Electrical World noted on November 3 that year that “Picken & Co., photographers, of 79 Greenwich avenue, make a specialty of dynamos and other machinery, and can show many good examples of their work.”

While the two firms were operating in the main house, the class of occupants in the rear building had declined.  On March 17, 1888 The New York Times reported on “a little family jar.”   Mary Gain and her mother, Bridge Carney, lived together in the basement.  The newspaper said “Both were drunk yesterday.  Bridget threw a lighted kerosene lamp at her daughter, which exploded, and the burning oil was thrown over the arms and hands of the daughter, burning her severely.  Then the daughter belabored her mother with a bale stick, breaking several of her mother’s ribs and cutting a severe gash on her head.”

Both women were treated at nearby St. Vincent’s Hospital, and then Mary was jailed at the Jefferson Market Police Court “to await the result of her mother’s injuries.”

The meager circumstances of the tenants in the rear building was reflected in an advertisement in The Sun on February 17, 1892.  “Woman wants situation in hotel or restaurant as dishwasher.  79 Greenwich av., top floor, rear.”

In May 1920 owner George A. Hamilton sold the property to Clayton M. Hamilton for $5,000.  What the California investor may have already known was that directly across the street from No. 97 Greenwich Avenue, plans were underway for a lavish silent movie theater—the Sheridan.   Certainly Martin J. Durkin knew about the project when he purchased the property a year later, in April, for more than double the amount--$11,000.  The New-York Tribune noted on April 14, 1921 that Durkin “will remodel the property.”

Later that same year The New York Times remarked on the “very noticeable improvements, although not on a large scale, being made in the Greenwich Avenue and Bank Street locality opposite the new Sheridan Theatre, which will be opened this Fall.”  The article noted “The tenement at 79 Greenwich Avenue, opposite the theatre, and the old building on the southwest corner of the avenue and Bank Street are being altered into stores and small apartments.”

In 1932 The Washington Square Review had to find a new home. The New York Times reported on May 29 that “The magazine is dedicated to the publication of collegiate rebel literature” and had been “suppressed at New York University.”   The radical journal leased space at No. 79 Greenwich Avenue and resumed publication by an editorial board headed by editor Leonard Dal Negro.

According to actor Arthur Anderson in his 2010 autobiography An Actor’s Odyssey: From Orson Welles to Lucky the Leprechaun, when his mother Violet moved the family into a two-room apartment here “above Notle’s Delicatessen,” in the winter of 1935, the monthly rent was $37.50.  The selling price of the property that same year had risen to $28,000.

In 1940 the building was renovated, resulting in two apartments each on the upper floors.  Another overhaul in 1995 resulted in the rear building becoming a single-family residence and No. 97 now having one apartment each on the upper floors.  Vised in between two early 20th century apartment buildings, George Brush’s home is the last surviving relic of the 1840s on the block.

photograph by the author
Posted by Tom Miller at 2:05 AM