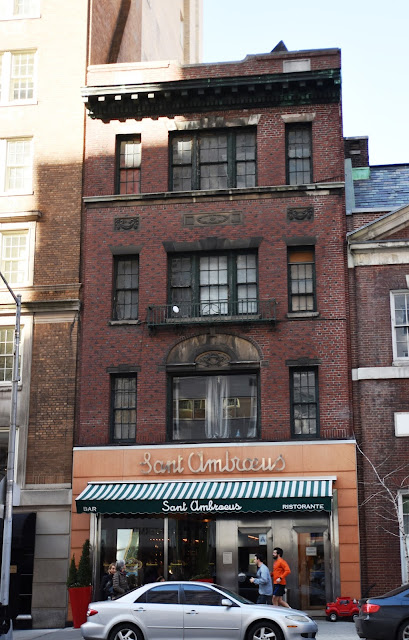 During the Civil War construction came to a near-halt in Manhattan.  But among builder Joseph Hewlett’s first projects following the war was his own home at No. 1000 Madison Avenue, between 77th and 78th Streets.  A block away development of Central Park continued, as the blocks spreading east were filling with brownstone rowhouses.

A year later, on March 27, 1897, auctioneer Peter F. Meyer announced that “the valuable dwelling parcel” at No, 1000 Madison Avenue would be sold at auction.  By now Madison Avenue, unlike Fifth Avenue just a block away, was seeing the incursion of commerce.  Many of the old mansions were being converted for business purposes at ground level.  The winning bidders for No. 1000 had the same idea—but they met unexpected resistance.

In January 1898 the new owners applied to the Department of Buildings for permits to alter the house “to a building to be used for stores and offices, and extending the building out to the street line.”  Removing the stoop and extending the façade outward would result in the structure projecting several feet beyond the adjoining buildings.  The permit was denied for structural reasons.  The walls and floor beams were of residential strength and did not meet building codes for an office building.

The owners tried again.  They amended the permit to provide alterations to “a two-family residence and stores on the first floor.”   The Commissioner of Buildings denied this application as well.  The 8-inch thick walls were too thin for the proposed use.  Within a ten-day period, their architect busily produced three different plans.  Finally the owners went ahead with the renovations--and were fined.

On February 19, 1898 the Real Estate Record & Builders’ Guide reported “The alteration work was in progress and the usual violation notice was served on the owners.”  The owners took the Commissioner of Buildings to court “to compel him to issue a permit.”  The judge sided with the Buildings Department and the dramatic makeover of No. 1000 Madison Avenue came to a halt; at least for now.

Victor Hugo Mathushek soon moved into the former Hewlett house.  He was a partner in Matheshek & Son, piano manufacturers, at Broadway and 47th Street.  The 44-year old left home for work on Monday morning, October 29, 1900; but he would never return.

The drug manufacturing firm of Tarrant & Co. was located in a large building at the northwest corner of Greenwich and Warren Streets.  Just after noon that day a fire was discovered.  As firefighters fought the blaze, it finally reached a storage area for chemicals.

The following day The New York Times reported “The greater part of two business blocks was wiped out of existence yesterday, and under the ruins this morning it is probable lie the bodies of forty or more unfortunate victims of fire and explosion.”  Among those listed as missing was Victor Mathushek.

By 1911 Henry Hart lived here.  He owned and operated commercial properties throughout the New York area; but was best known for his Lorraine Hotel in Edgemere, Long Island.  The fashionable resort hotel sat on the beachfront and Hart marketed it as “New, modern, strictly up-to-date.”  Not only did the rooms have running water; there was a telephone in each in 1909.

Henry Hart remained in the house until 1914 when in June Elinor Comstock leased it for her newly-founded Elinor Comstock School of Music.  She had taught music in New York for 15 years and was well-known in musical circles.  A Handbook of the Best Private Schools of the United States and Canada noted “The members of her school have opportunities for carrying on academic as well as musical study.”

Shortly after she leased the house the New-York Tribune, on June 28, reported that she would sail on the steamship Bremen for Europe on July 4.  “She will go direct to visit her friend, Ignace Paderewski, and will be accompanied by some of her pupils, who desire to study with this celebrated artist.”

Elinor was back in New York by the middle of September to start the fall session.  But the school would not remain in the house for long.  Elinor Comstock moved her school to another former dwelling at No. 41 East 80th Street at the corner of Madison Avenue, two blocks north.

No. 1000 Madison was purchased by the Ritz Realty Corp., owned by Robert M. Catts.  Catts succeeded where the 1898 owners had failed.  His firm contracted the architectural firm of Schwartz & Gross to transform the old house to a modern, neo-Federal store and apartment building.

The completed alterations, which cost Ritz Realty $10,000 (in the neighborhood of $125,000 in 2016), resulted in a dignified brick-faced façade above the storefront.  The architects used charred header bricks to give the illusion of age.  Carved panels, splayed and paneled stone lintels, an a wrought iron balconette carried out the Federal motif.  A dramatic stone tympanum featured an unfolded fan fronted by a basket overflowing with flowers and ribbons.

Henry Hart did not totally abandon his former property.  The ground floor retail space became home to the Henry Hart, Inc. Florist shop.   Hart advertised his flower store as being “in the heart of the most exclusive residential section.”  The florist would remain here at least until 1919.

In the meantime, Ritz Realty Co. marketed their upscale apartments in “exclusive Lenox Hill.”  An advertisement in The Sun on July 15 1919 offered “2, 3 and 4 large rooms and bath with very large closets, open fireplaces, etc.; must be seen to be appreciated.”  The least expensive apartment rented for $1,300 a year; about $1,500 per month today.  The most expensive was more than double that amount.

Among the new residents was Oliver Hazard Perry La Farge who signed a lease in August 1937.  La Farge led a double-life, of sorts.  A respected anthropologist, he had explored early Mexican sites in 1925 and continued to study sites in Central American and the American Southwest.  A rigorous fighter for Native American rights, he was President of the Association on American Indian Affairs and wrote more than 15 scholarly books, mostly on Native Americans.

But La Farge was even more well known as a Pulitzer Prize-winning author for his 1929 Laughing Boys.  His short stories were published in popular magazines such as Esquire and The New Yorker.

Another noted resident was William Barnes Morgan and his wife, the former Louise Sureth.   For several years Morgan was a foreign representative of the Twentieth Century-Fox Film Corporation.   The couple was living here on July 23, 1944 when Morgan died at the age of only 39.

The last half of the 20th century saw upscale art and antiques galleries moving up Madison Avenue.  In 1960 the Bernard Danenberg Galleries moved into the former Henry Hart florist shop.  During the remainder of the century the building would be home to the Royal Athena Gallery and the Haime gallery, as well. 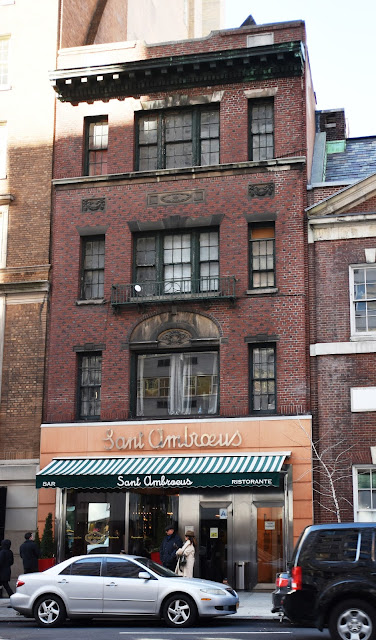 In 2003 the ground floor was taken by the Sant Ambroeus restaurant, which remains there in 2016.   There are still two apartments per floor above.   Although a coat of grime disguises its architectural details, the upper façade is essentially unchanged since Schwartz & Gross transformed Joseph Hewlett’s post-Civil War home in 1916.