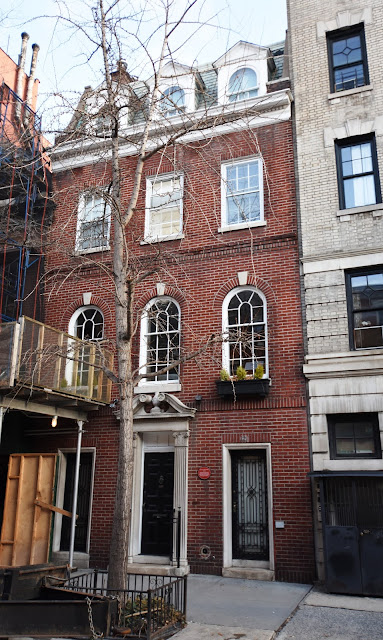 In 1833 the two-block long road that ran from Washington Square west to West 4th Street was named Washington Place.  The street was already being developed and two years earlier builders John Nichols and William Carroll had joined forced to erect four brick-faced homes here.  Nos. 121 through 127 were two-and-a-half stories tall and featured the expected architectural features of Federal-style middle-class homes—tall dormers rising from the peaked roofs, a simple fascia board below the cornice, Flemish bond brick, and handsome entrances with fluted columns.

No. 121 Washington Place was home to the Russell family by the 1870s.  Smith Lafayette Russell was the grandson of Abraham Russell, a founder of the Duane Street Methodist Episcopal Church.  Like his grandfather and father, Smith L. Russell remained highly involved with the church, which became the Duane Methodist Episcopal Church when it was moved to Hudson Street around 1862.  He owned rental properties and railroad and bank stocks, from which he earned handsome profits.

While perhaps not crowded, the Washington Place house was full.  Living here with Smith and his wife, Mary, were his unmarried sisters, Hester Mary Russell and Hilah E. Russell.

Hester died in the house on Saturday morning, September 13, 1890.  Her funeral in the parlor was not held until 4:00 the following Wednesday.  Seven years later her sister, Hilah, died in her bed on Saturday, April 24, 1897.  Her funeral, too, would wait until 4:00 p.m. on the next Wednesday.

Two months later Smith Russell proudly addressed the congregation of the Duane Methodist Episcopal Church.  On November 21 the church’s 100th anniversary was celebrated and a white marble tablet in memory of Abraham Russell was unveiled.

The aging man remained active in his religious and business interests through the turn of the century.  In 1900, for instance, he replaced the storefront on his Bedford Street business.  When he died on March 10, 1904 he was 80 years old.  His funeral, like those of his sisters, was held in the Washington Place house.

Russell's will shocked almost everyone, including the members of the Duane Episcopal Methodist Church, and was publicized nation-wide.  On April 6 the New-York Tribune noted “When Smith Lafayette Russell died, on March 10, there was no great outpouring of religious and charitable societies at his funeral, yet he left almost all his estate to keep downtown for all time a church of which he had been an active member for many years.”

Russell left $50,000 to the church—nearly $1.5 million in 2016.  It was estimated to be the largest trust ever created for a church in New York City.  Included in the bequest was the Washington Place house.  Mary had two years to move out.  The Tribune reported “this house his widow is to have free for two years; then it is to be rented and the rent paid to the Duane Church.”

Mary was not totally overlooked in the will; although she received nothing directly.  She was to receive the interest from the massive Duane Methodist Episcopal Church Sustentation Fund “for her support” until her death.

Mary Russell seems to have dragged her feet a bit in transferring the title to the trustees of the estate.  She waited until 1906, the year she was to vacate, to do so.  Hints that she had second thoughts about leaving Washington Place first arose on February 27 that year when she filed an “action to extend time to accept dower.”

The extension may have been a ploy to give her time to file her law suit against the Trustees of her husband’s will.   The action claimed that Smith Russell had no legal right to dispose of his estate as he did.  The New York Times explained on June 8, 1906 “A question was raised as to the validity of the will under the law prohibiting the bequest of more than one-half an estate to charitable or religious purchases.”

Rather than go to court, the estate came to a compromise with Mary Russell.  She was to receive two-thirds of the amount left to the church that exceeded one-half of the estate.  The confrontation did not bruise the church’s memory of Smith Lafayette Russell.  On June 16, 1907 he received his own bronze tablet in the church.

Eight years earlier New York society had been shocked when unexpected news arrived from Archahon, France where Mason Chichester Davidge and his wife, the former Clara Potter, were traveling.  The couple was still considered newlyweds; and Clara was well-known as the daughter of the powerful and charismatic New York Bishop Henry C. Potter.

On October 12, 1899 The New York Times reported “The cable brings the news of the sudden death on Tuesday…of Mr. Mason C. Davidge…His death is a sad ending of a charming romance.”

Now in1907 Clara Davidge purchased the former Russell house.   Her choice of Greenwich Village in which to live was no doubt prompted by her intense interest in the arts.  A painter herself, her parlor was the scene of gatherings of artists and literary figures, including Willa Cather, Henry Fitch Taylor, and Samuel Clemens.  Sculptor William Zorach later remembered how she “was always discovering talented young artists.”  It was Clara who helped Gertrude Vanderbilt Whitney in organizing her art gallery.
With Henry Fitch Taylor she opened the Madison Gallery in 1908.  It was here that the initial planning meeting for the still-famous Armory Show of modern art was held.

In 1909 Clara discovered a new protégé in poet Edwin Arlington Robinson.  While Robinson was a recognized and published writer, he struggled with personal problems and alcohol.  On August 6, 1909 The Sun reported that Clara had hired architects Henry Killiam Murphy and Richard Henry Dans, Jr. to design a one story studio in her rear yard.  The quaint studio building, which cost Clara $850, was for Robinson.

Edwin Arlington Robinson moved into the quaint little building in November that year and, according to Scott Donaldson in his Edwin Arlington Robinson: A Poet’s Life, lived here for two years.  “Breakfast was brought to him, and he took his other meals where he wanted.  He was on call to appear at occasional social gatherings, but otherwise he was left undisturbed to write.”  It was from here that Robinson compiled his The Town Down the River, published in 1910.

That same year Clara Davidge took out a $24,000 mortgage on No. 121 and No. 123 next door.  It is possible she considered combining the two charming Federal houses; but if so the plans never came to pass.  Instead, in March 1912 she had a one-story extension built on No. 121 and eight months later leased the house to Henry P. Griffin.

The reason Clara left the Washington Place house may have been her engagement to Henry Fitch Taylor who was still managing the Madison Gallery.  They married in 1913.

Also married in 1913 were Frances Perkins—already active as a social reformer—and economist Paul C. Wilson.   They rented No. 121 from Clara Davidge Taylor following their honeymoon.  Frances described it in 1915, according to her biographer, Naomi Pasachoff, as “comfortable, though old fashioned.”  They hired a married German couple to run the household.

In the meantime the studio formerly inhabited by Edwin A. Robinson was leased to artist William E. Schumacher.  In 1913 he exhibited two works in the International Exhibition of Modern Art—“Her Blue Skirt” and “The Lady, Maid and Child.”

In 1913 Paul Wilson was on the newly-formed mayoral staff and his career was on an upward path.  His close ties with Mayor John Purroy Mitchel were evidenced following a high-level ceremony on June, 24 1915 which included the Governor, the Netherlands Consul-General and other dignitaries.  Immediately after the Mayor accepted a flag from the St. Nicolas Society, he confided that he was suffering an intense headache.  Instead of going to the mayoral mansion, The Sun reported “He went to the home of one of his secretaries, Paul Wilson, at 121 Washington place, promising to return for the ceremonies of the afternoon if possible.”

But it was the career of Frances Perkins that would soar.   The couple had a daughter, Susanna, in 1916; but Paul’s emotional problems (labeled today by some as bipolar disorder) that eventually prevented him from being able to work.  Frances went on to become the first female appointed to the United States Cabinet, serving as U.S. Secretary of Labor under Franklin D. Roosevelt.

The rear yard studio continued to be used by artists—Bayard Boyesen was leasing it in 1918 and Sacha Finkelstein was here in 1919.  That was the year that Clara Davidge Taylor sold Nos. 121 and 123 Washington Place to Oliver Harrison Smith.  The Sun reported on July 8 that he “will remodel the buildings for studios.”

Two years later a freak accident would end Clara’s colorful life.  For years she had suffered a back ailment which “caused her to walk unsteadily,” according to The New York Times.  In November 1921 she and her husband were staying in the guest cottage on her brother’s estate in Smithtown, Long Island.

On Sunday morning, November 6 the body of the 63-year old was found face down in a marsh beside a private road on the property.  Although the water was only two or three inches deep, it appeared that Clara had lost her footing and fallen into the mud.  Unable to free herself, she drowned.

The studio apartments in No. 121 Washington Place saw a series of upscale tenants.  In 1920 Paul Caldwell Wilson was living here.  He was a graduate of the University of Chicago.  And George H. Soule, Jr. had an apartment that same year.  He had graduated from Yale in 1908.

But the building’s life as an apartment house would be short-lived.  In 1925 E. Dean Fuller and his wife initiated a gut-renovation of the charming home.   The nation was experiencing a fascination with early American architecture and history that began around the turn of the century.  A year earlier John D. Rockefeller, Jr. had begun the first steps in the massive restoration project at Williamsburg, Virginia.  Now the Fullers would transform No. 121 Washington Place from a Federal period house to a Georgian reproduction.

The renovation took a full year.  The floor levels were altered, providing a street level entrance, and the façade was stripped away to be replaced with a striking four-story façade that would be at home in Philadelphia or Boston.

An impressive single-doored entrance was flanked by fluted Corinthian pilasters which upheld an elegant broken pediment with a stylized pineapple.   The second floor featured three arched openings with stone keystones and at the attic level three especially handsome dormers with arched windows were adorned with fluted pilasters. 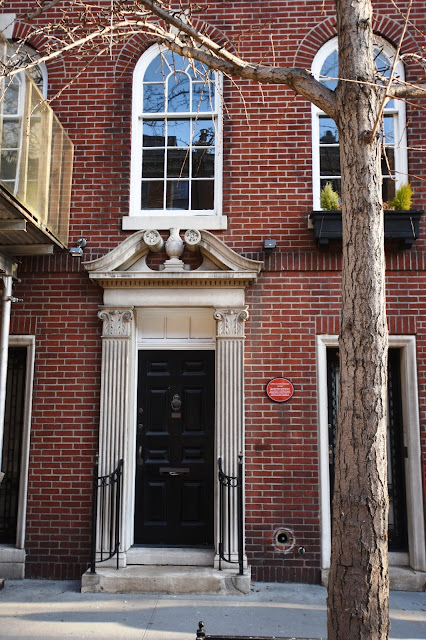 Fuller, who put the title in his wife’s name, was an attorney and President of the Fuller-Sherman Company.  He made his fortune by specializing in Mexican and Latin American legal matters.  His firm had a branch office in Mexico City and in Tampico.

So entrenched was his business there that he had earlier defied President Woodrow Wilson’s warning in 1913 that all Americans should leave Mexico.  In a letter to his clients on August 29 that year he said that he did not believe there was any danger to Americans and “secondly, because we do not care to abandon and lose our earnings, derived from many years of labor in the country…it is my duty to remain here.”

Ninety years after the Fullers transformed the house, it remains a single-family home.  A metal plaque has been affixed to the façade reminding passers-by that Edwin Arlington Robinson once lived here.