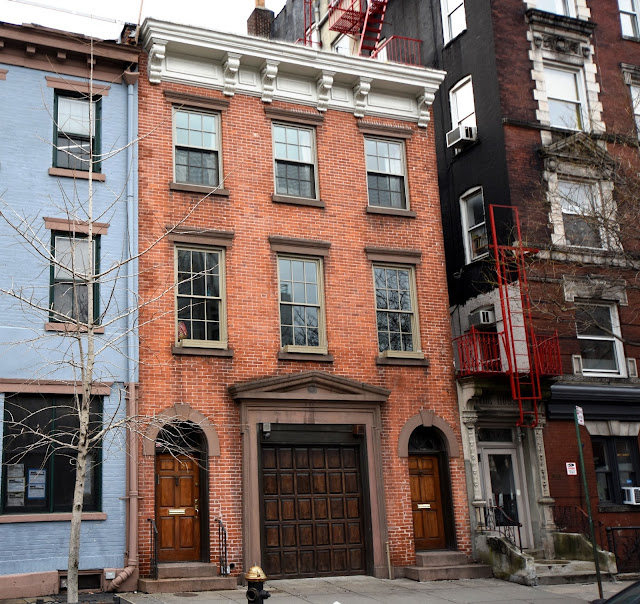 Fair Ireland’s farm sat slightly north of the village of Greenwich, bounded approximately by what would become 13th Street, Greenwich Avenue, West 11th Street and Greenwich Street.  Although the Commissioners’ Plan of 1811 laid out lot lines and streets; the property would remain mostly undeveloped into the 1820s.

But the burgeoning population of Greenwich Village resulted in brick and wooden houses appearing in the 1830s.  By mid-century the now-developed neighborhood required fire protection.   John B. Ireland’s old stable stood on Horatio Street, between Eighth Avenue and West Fourth Street.   It had been converted for use by the Perry Hose Company No. 23, and in 1855 the Board of Assistant Aldermen described the facilities saying “House ordinary.”

At the time New York City’s fire fighting force was composed of a disorganized collection of volunteer companies.  When a fire broke out, young men in the neighborhood called “laddies” would scramble to the fire house.  Nearby fire houses would vie with one another to arrive at the fire first, or to become more skilled at extinguishing it.   The fire houses were often given catchy names like Oceanus and Empire.  The company at No. 48 Horatio Street, Perry Hose Company No. 23, was named in honor of Commodore Matthew C. Perry who commanded a number of ships in several wars, most notably in the Mexican-American War and the War of 1812.

Although the company was “entitled” to 25 men, it had only 11 volunteers in 1855.  Their blue-collar professions included plaster manufacturer, cartman, carpenter, feed store proprietor, stair builder and painter, among others.

In 1856 the City purchased the property and began construction on a new firehouse.  Somewhat ironically, Commodore Matthew Perry died in 1858, the year after the new house was completed.

The extremely attractive Italianate building following the accepted fire house design—a central truck bay flanked by balanced openings.  The hose engine and horses would be housed on the ground floor.  The second and third floors would be a combination living quarters, hay loft and equipment rooms.

The red brick façade was trimmed in brownstone and capped with a handsomely bracketed cornice.  Eye-catching were the bay enframement with its classic pediment and the arched first floor openings.  In 1858 the city appraised the building at $6,100—about $181,000 in 2016.  A year later the roster had grown to 19 men, at which time the Aldermen deemed the house “in good order.”

The firehouse was barely completed before it was nearly destroyed.  As Independence Day approached in 1857 a fireworks display was planned in nearby Jackson Square.  A Mr. Edge from Jersey City brought the crates of fireworks to the firehouse “for safekeeping” and they were placed in the back room on the first floor.

A few days later Sergeant Jacob I Sebring of Precinct No. 9 reported “Yesterday afternoon, about 6-1/2 o’clock, the Enginehouse of Perry Hose Company No. 23, located in Horatio-street, was discovered to be on fire.”  The fireworks had been set off, resulting in panic throughout the neighborhood.

Sebring continued “They were intended for public exhibition on Jackson-square.  The programme, however, was suddenly changed, and instead of imparting joy to the multitude, spread terror and dismay through the immediate neighborhood.  It was no doubt caused by incendiaries, as two boys were seen to climb into the rear window of the building, the explosion taking place immediately after.”

The two mischievous youths, unfortunately for them, were nabbed by Sergeant Sebring “on suspicion.”

In 1860 the City of Cleveland planned extensive celebrations for the unveiling of a statue to Commodore Perry.  The Alert fire company extended an invitation to Perry House Company No. 23 to attend.  Initially the company accepted; but on September 3, just days before the event, the Cleveland Morning Leader printed the disappointing sub-headline, “Not Coming.”

The newspaper reported “The Perry Hose Company of New York…have been compelled to abandon their excursion to Cleveland on the Tenth, ‘because of the shortness of time for preparation, and the exorbitant rates charged by a concerted monopoly of railroad companies.’”  The Morning Leader added, “The Alerts had prepared to meet the Perry Hose in a fitting style.”

Around the first week of February 1861 the fire fighters held a ball.  Such annual social events were common within professional groups.  Among the guests was John Kerrigan, brother of Congressman Kerrigan. The high-end affair was crashed by members of the Dead Rabbit gang—one of the notorious and dangerous gangs of the Five Points section.   Kerrigan was later outspoken in the newspapers, delivering “what is said to have been deserved chastisement to Fatty Welsh and Johnny Aaron, known as leaders of the Dead rabbit organization, who visited a ball of Hose Company No. 23, and acted in an outrageous manner,” as described by The New York Times.

Insulted, Fatty Walsh and Johnny Aaron plotted revenge.   They got their chance about a week later when they encountered Kerrigan on February 12 on Mulberry Street.  “Immediately an attack was made upon him with stones, which he managed to avoid by running,” reported The Times.  But he was “followed, however, by a yelling crowd of about twenty-five or thirty dead-rabbits.”  As Kerrigan neared City Hall Park he feared the rabble was about to overtake him, so he stopped, pulled a revolver, and shot twice.   Although he did not hit any of the ruffians, the gunshots had the desired effect and the gang retreated.

The Civil War had an effect on the Perry Hose Company’s roster.  On August 19, 1863 Henry Ebbultzer was drafted into the Union Army; and two years later on March 15 Perry E. Wood’s name was pulled in the draft lottery.

On October 15, 1865 a grand parade of firefighters was held in Philadelphia.  Among the companies from New York City to participate was Hose Company No. 23, under its foreman Alexander Davidson.  The following day Philadelphia's Daily Evening Bulletin reported that the Perry Hose Company “had fifty men on parade.  They were equipped in the New York style.  The handsome carriage was profusely decorated with flowers and a very creditable display was made.”

It was the last time the Perry Hose Company members would be together.  The Act of 1865 did away with the mish-mash of volunteer companies and created the professional Metropolitan District fire department that covered Brooklyn and New York.  Earlier that year, in May, the organization of the “Paid Fire Department” was announced.  Alexander V. Davidson, foreman of Perry Hose Company No. 23, had been named Secretary of the new Department.

On December 10, 1865 the fire houses deemed no longer necessary under the new organization were put up for auction.  John Conolly bid on several of the buildings, including Hose Company 23—offering $200.  The insultingly-low bid was turned down and the City retained possession; leasing it rather surprisingly to Alexander V. Davidson for $325 a year.  (His rent was increased to $350 the following year.)

Davidson leased the former firehouse for just two years.  By order of the Commissioners of the Sinking Fund a large amount of city-owned property was liquidated at auction on October 21, 1867.   No. 48 Horatio Street “with brick building” sold for $7,400; significantly more than John Conolly had offered two years earlier.

As an interesting side note, Alexander V. Davidson went on to become Deputy Sheriff, then Sheriff in 1882.  His career came to an ignominious end when he was indicted on three charges of grand larceny on March 21, 1884.  Davidson skipped town, and when he was still on the lam in 1886 the contents of his impressive house at No. 8 Van Ness Place were auctioned.  Among the items sold was “the inlaid marbletop table which used to belong to the Perry Hose Company No. 23, in the days of the old Volunteer Fire Department,” according to the New-York Tribune on February 16.

The building became the property of Henry Tonjes, a real estate operator who lived two doors away at No. 44 Horatio Street.  In the mid-1870s he leased it to H. H. W. Neslage who ran his livery stable here.

The building continued to house livery stables and horse-drawn trucks into the 20th century.  At the turn of the century I. Moore & Co., “horses and trucks,” was leasing the space from William Minnerly, who had owned it at least since 1889.

By the end of the First World War the upper floors had been fitted out as rented rooms.  James Sanders was living here in 1920 when he and Josephine Nolan were arrested for breaking into an apartment building in Brooklyn.

The property was purchased by Adolph Leiser who renovated the first floor as a store and “dwelling” space on the upper floors.  The ground floor became home to A. Leiser & Co., purveyors of “a complete line of scene painters’ colors and supplies” for theatrical stage set designers.

One of Leiser’s employees, Paul Wichert, lived in an upper floor apartment when Adolph Leiser died on September 29, 1937.  Wichert received a generous $3,000 in his employer’s will—nearly $50,000 today and an enormous windfall during the Great Depression.

William F. Wrieden lived in an apartment here in 1947.   The 39-year old was arrested on July 30 that year for promoting a “pony meter.”  The Attorney General’s office described the phony gadget as “guaranteed to pick the winning horse at any track.”

Wrieden had been a busy man.  Not only was he awaiting trial for eight counts of grand larceny, Assistant Attorney General Harry Kirshbaum told reporters that his office “was still investigating dozens of complaints against Wrieden, including the passing of thirty-four bogus checks.”

In January 1955 the Horatio Street property changed hands for the first time in 35 years when it was sold by the Leiser estate.  Nevertheless, A. Leiser & Co. remained in the ground floor at least until 1958. 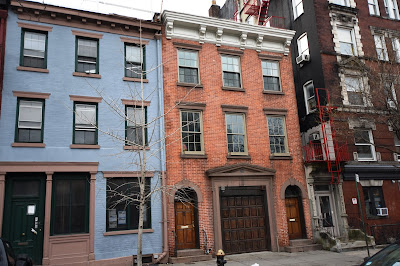 In 1989 the old firehouse received a tender makeover when it was converted to a single-family home on the upper floors, and a garage and apartment on the ground level.