The Unexplained Charmer at No. 12 West 69th Street 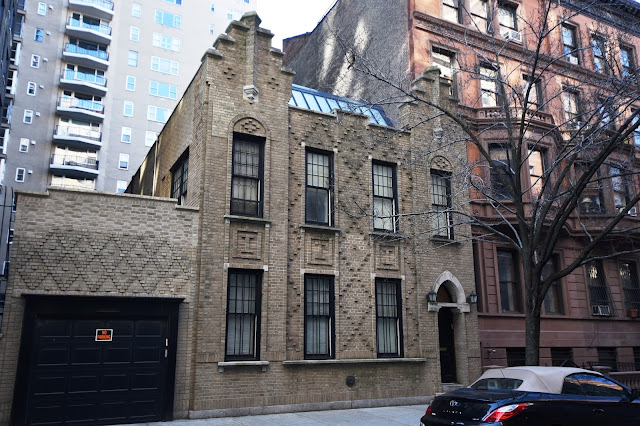 Real estate developers and contractors Leo S. and Alexander M. Bing routinely turned to architect Robert T. Lyons for their substantial commissions.  In January 1912, for instance, Lyons designed their 20-story office building at Broadway and 20th Street, and the following year he filed plans for a 12-story apartment hotel at Nos. 46 to 50 East 58th Street.  Accustomed to such ambitious projects, Lyons may have been a bit surprised at the scale of another 1913 job.

In November that year he filed plans for a “brick and stone apartment house” to replace the Francis R. Stoddard house at No. 12 West 69th Street.  Bing & Bing had inexplicably small-ranged objectives for the valuable plot.  The “apartment house”—just two stories tall--would contain a single apartment and one artist studio.

The $20,000 building was completed in 1914.  Both surprising and charming, it boasted an adjoining private garage—the latest in convenience in the automobile age.  Lyons had produced a quaint structure faced in brown-beige dragfaced brick.  Drawing inspiration from two unrelated periods—Gothic and Flemish Revival—he decorated the façade with projecting brick diapering in a diamond design.  Arches over upper windows, spandrel panels, and other decorations were also executed in projecting brick.  Leaded windows echoed the diamond pattern.  Flemish stepped gables flanked the vast studio window on the roof.  Lyon’s sparse use of stone trim was most evident in the Gothic pointed entrance.

On August 16, 1914 Bing & Bing advertised the two spaces in The Sun.  The “exceptionally large and light” apartment contained four rooms and a bath, and was offered at $1,400.  The rent would translate to about $2,850 per month today.  The “one room studio and bath” was advertised for about half that amount.

The studio was leased to artist Emma Fordyce MacRae.  Known in her personal life as Mrs. Homer Swift, she produced still life and portrait paintings from the sun-drenched space.   In 1916 she first exhibited in the Pennsylvania Academy of Fine Arts exhibition.  In February the following year she and nine other women artists held a show at the Art Club of Philadelphia.  The group would become known as the Philadelphia Ten and would exhibit their works together through 1945.

In the meantime, writer Fannie Hurst leased the apartment below.  Unlike Emma, who used the studio only as a workspace, Hurst lived and worked in the apartment.  Her novels and plays often focused on the working class, which she meticulously researched for authenticity.  In 1919 Herringshaw’s American Blue-Book of Biography noted “She has made special studies of the stage, the shop girl and her environment; and served as saleswoman, waitress and other positions.  She also made a trip across the Atlantic in the steerage to obtain material for a novel.”

Among her works so far were the novels Just Around the Corner, Every Soul Hath its Song, and Gaslight Sonatas; and plays The Land of the Free, and The Good Provider.  Two of her later novels, Back Street and Imitation of Life would become the basis of successful screen plays.

Fannie Hurst had a secret.  And in April 1920 she found out that a St. Louis newspaper had discovered it and was about to print the sensational story.  Rather than allow the public to learn about her five-year marriage to pianist Jacques S. Danielson through salacious reporting; she held a press conference of sorts in the 69th Street apartment on May 3.

The New-York Tribune reported that the “Announcement of the marriage was made yesterday by Miss Hurst as she reclined on a mouse-colored lounge.”  Fannie explained that she and Danielson had been married on May 5, 1915 in Lakewood, New Jersey and “they parted company thirty minutes later.”

The Tribune advised “Since then they have maintained separate homes, so as not to interfere with each other’s artistic achievements…They will continue to live apart, maintaining separate studios, keeping their own friends, and doing just as they please.”

The modern and unorthodox arrangement was shocking to some readers.  But Fannie insisted the plan worked.  They considered the marriage “a trial” initially; but she said “now, after an acid test which has lasted five years the dust is still on the butterfly wings of our adventure and the dew is on the rose.”

“Being firmly of the opinion that nine out of ten alliances I saw about me were merely sordid endurance tests, overgrown with a fungus of familiarity and contempt, convinced that too often the most sacred relationship wears off like a piece of high sheen satin damask, and in a few months becomes a breakfast cloth, stale with soft boiled egg stains, I made certain resolutions concerning what my marriage should not be.”

The couple had breakfast together twice a week.   Fannie rejected the “antediluvian custom of a woman casting aside [her] name...I was born Fannie Hurst and expect to die Fannie Hurst.”  Should a baby arrive, it would take its father’s surname until it was of the age that it could choose for itself.

If either Fannie or her husband wanted to have dinner or go out together, they telephoned for an appointment.  And the author gave the press an amusing example of situations that sometimes arose because of their secret alliance.  “One evening last week, I attended theatre with a friend, and sat, quite by chance, next to my husband and a party of his friends.  And we were introduced to one another!” 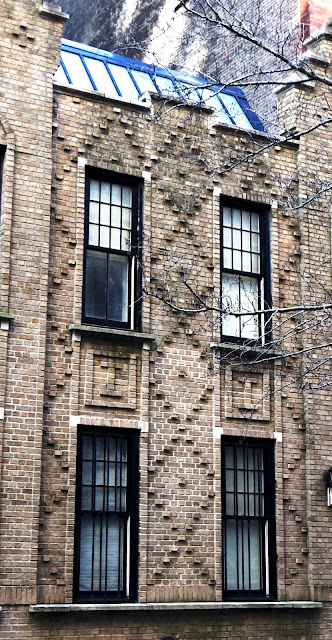 By 1930, when Emma Fordyce MacRae was made a member of the National Academy of Design, Fannie Hurst been gone from the building for several years.  She had moved to the nearby 67th Street Studios Building.  Her apartment had been taken by artist Thomas Spector.   He had studied art in Europe for several years; and since 1925 earned his living as the director of the art department of the James Madison High School in Brooklyn.  Spector lived in the 69th Street apartment with his wife and three children.  He was killed in a horrific accident when the car he was riding in crashed into a stone wall in East Hampton, Connecticut on August 21, 1930.

By 1933 actress Molly Picon was living in the apartment.  Born Malka Opiekun in New York City, her parents were Jewish immigrants from Poland.  She began her stage career at the age of six in the Yiddish Theatre.  By the time she moved into No. 12 West 69th Street she was wildly popular and had opened the Molly Picon Theatre in 1931.   Decades later she would be a beloved character actress on television series like Car 54, Where Are You? and The Facts of Life.

On June 24, 1933 a reporter from The New York Times came to the apartment to interview Molly on her recent trip abroad.  She gave her perspective on the several social and political issues that were changing the world.

She was happily optimistic about the development of Palestine, saying “The people are building something new and they are building it happily and joyfully.  An atmosphere of friendliness and affection pervades the country and people go about singing in the streets.”

She touched upon the situation in Germany where a few months earlier Adolf Hitler had been appointed Chancellor.  She said she and her husband had “encountered no discourtesy there, but that the country was exuding hatred for the whole non-German world, Jew and Gentile alike.”

Following Molly in the apartment was artist Joseph Hirsch.  While living here in 1944, with World War II raging throughout Europe, he traveled to the Italian front.  He spent two months on the battlefield, sketching United States Army doctors and nurses in action.

Emma Fordyce MacRae was still in the studio here in 1974, sixty years after she first signed the lease.  By now her works hung in the Cosmopolitan Club and the National Academy of Design.  She died on Tuesday, August 6 that year in her Park Avenue apartment.  She was 87 years old.

By the 1980s No. 12 West 69th Street had become home to the publishing firm English Crafters.  In 1994 it was converted to a single family house with a home gym, wine cellar, and, reflective of its new role, three “nanny rooms.”

Other than the sad loss of the leaded windows, little has changed outwardly to the surprising little century-old building.