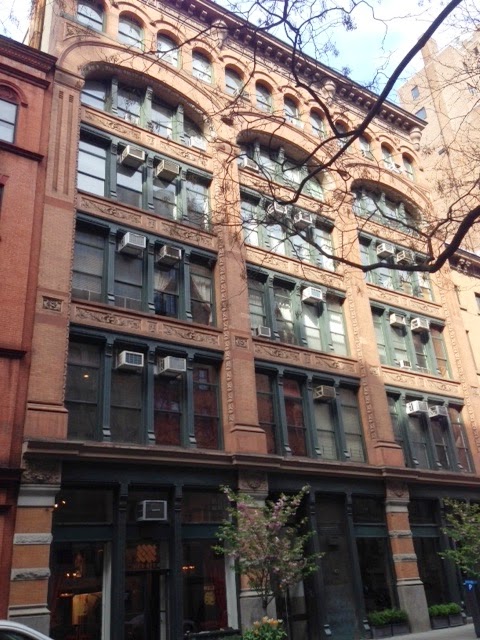 Brothers Louis and Samuel Sachs were highly successful fur manufacturers and importers in the 1880s, doing business under the name L. Sachs & Bro.   Around 1890 they branched out into real estate development.   That year alone they completed the six-story cast iron building at No. 112-114 Prince Street (which they occupied), the $40,000 loft building at No. 124 Greene Street, and the large factory structure at Nos. 21 to 29 West 4th Street designed by Richard Berger.

Within the year the brothers would put the prolific architect to work again.  On January 31, 1891 the Real Estate Record and Builders’ Guide reported that “After May 1st next L. Sachs & Brother will improve their property at Nos. 43, 45 and 47 East 10th street.  Richard Berger has plans on the boards for two six-story and basement brick, stone, iron and terra cotta store buildings…These buildings will be finished in hardwood throughout and complete in all appointments, elevators, steam head, and electric lights and other improvements being provided.”

The Sachs brothers were invading a still-upscale residential neighborhood.  Next door at Nos. 39-41 was the The Lancaster apartment building where moneyed residents no doubt eyed the demolition of the old buildings with suspicion.   That, in part, may explain the $100,000 the developers spent on the new building—in the neighborhood of $2.7 million today.

The impressive structure was completed within a year.  The concept of two buildings was discarded and, instead, there were two store spaces at sidewalk level and massive lofts on the five floors above.  Berger used cast iron to frame the openings, making possible expanses of glass that poured sunlight into the factory spaces.
An industrial take on Romanesque Revival, Berger’s design used three five-story arches to lighten the visual bulk.  The style, which was often ponderous, emerged at Nos. 43-47 East 10th Street as light and airy.  Berger adorned the façade with terra cotta panels depicting bas relief portrait busts, embracing putti that morphed into floral forms, and flowery garlands and ribbons.  The top floor featured a string of 12 arched openings that unified the massive arches below.

The new building quickly filled with publishing firms, among the first of which was Lovell, Coryell & Company.  It was the first home of the firm which John Wurtele Lovell and Vincent M. Coryell had recently founded .   In March 1892 it signed a three-year lease for the third and fifth floors at $4,500 for the first year and $5,000 each year afterward.

Once in, the company wasted no time publishing its first titles.  In July that year it released J. M. Barrie’s Auld Licht Idylls; Of the World, Worldly by Mrs. Forrester, and J. H. Pearce’s Inconsequent Live.  The volumes retailed at about $1 for cloth-covered hardbacks, and 50 cents for paperback.

By May the University Publishing Company had moved in.  The firm printed textbooks and other educational publications, such as “Maury’s Geographies; Holmes’, Davis’, and Lippincott’s Reading Books; Venable’s and Sanford’s Mathematics; Clarendon Dictionary, Gildersleeve’s Latin, and other standard and popular books.”

Joining the firms in the building was William Wood and Company—the oldest publishing house in New York other than the Methodist Book Concern.  Samuel Wood founded the business in 1804 at No. 362 Pearl Street; and it was now headed by his grandson, William H. S. Wood and his three sons.  The firm published medical journals and magazines, including the American Journal of Obstetrics and Diseases of Women and Children; the American Druggist; New Remedies; and the Medical Journal.

The academic works of William Wood and Company and the University Publishing Company were a world apart from the light reading sold by Lovell, Coryell & Co.  In 1893 it published Mrs. Oliphant’s The Marriage of Elinor; Penance of Portia James by Tasma; and F. W. Robinson’s The Wrong That Was Done.  Lovell, Coryell & Co. was still publishing J. M. Barrie’s latest works, releasing A Tillyloss Scandal and Two of Them that year.   Despite its three-year lease, Lovell, Coryell & Company moved to East 16th Street later that year.

The personal advertisements in the back of William Wood and Company’s Medical Record often included positions-wanted ads from out-of-work doctors.   One, in December 1893 read “A regular physician of mature age desires a position as Associate with, or Assistant to, some busy practitioner.” 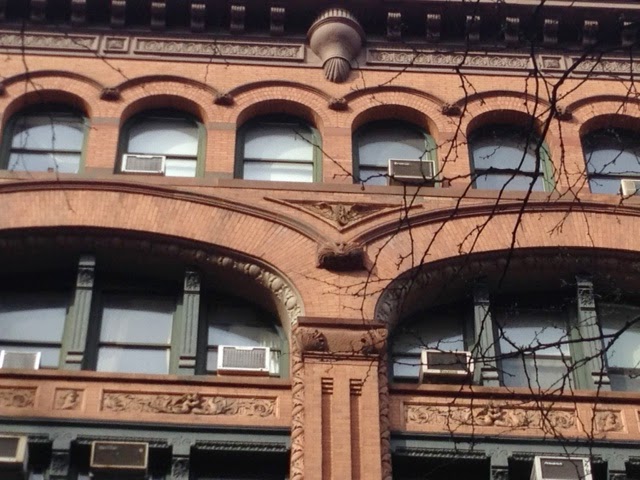 Another publisher, Maynard, Merrill & Co. had also moved in when the building opened.   Like William Wood and University Publishing, it produced academic works like An Essay on Addiction which it released in 1892 and The School Journal.   In the spring of 1893 the firm sent printed pages and covers of Alonzo Reed’s “early study of the English language” to George W. Alexander’s bookbindery at No. 108 West 18th Street.   On June 21 Alexander’s operation was destroyed by fire and the Reed material was badly damaged, much of it falling through to the cellar.

The debris in the basement was regarded as worthless and Alexander traded it to the junkmen for clearing out the space.  But not all of Maynard, Merrill & Co.’s pages and covers made it to the junkyard.   Bookseller William Beverly Harison of No. 59 Fifth Avenue collected what The New York Times called the “impaired and soiled sheets.”  By picking and choosing the best elements, he bound them into volumes and put them in his bookstore.

Unfortunately for Harison, the original publishers discovered the sneaky deed.  They took him to court in January 1894, charging that he “has sold and exposed to sale a number of copies of the book made up from damaged and soiled sheets, and in violation of the original copyright.”

The Times deemed the case “a novel suit” and when one of its reporters knocked on the door of Harison’s house at No. 102 West 93rd Street on January 4, the embarrassed bookseller “refused to discuss his side of the case.”

As the century drew to an end, dry goods and garment firms moved into the area.  Among the first to invade the publishing building on East 10th Street was Northrop & Curry.  The makers of boys’ clothing took the top floor around the beginning of 1897.  The family-like interaction among  its employees was reflected in an paragraph that appeared in The Sun on April 28, 1897.  “Employees of Northrop & Curry have organized for the coming season, and would like to hear from teams of dry goods and clothing houses for Saturday afternoon [baseball] games during June, July and August.”

The following year, just before dawn on June 16, 1898, “the neighborhood of Grace Church was shaken by a loud explosion,” according to The Sun.   The explosion had occurred in the Northrop & Curry shop and immediately flames burst out through the arched windows.  The newspaper reported that “the tenants in the Lancaster apartment house, next door, whom the explosion had aroused from sleep, cried pitifully to be let out.  They thought the house was on fire.”

The factory space, including the elevator shaft, was tightly closed.  The circumstances led fire investigators to believe that the gases and heat from the fire had built up with no means of escape, until the pressure blew out the windows in the loud explosion.  “It is what the firemen call the back draught,” reported The Sun.  “About $8,000 damage was done.  The street was littered with broken window glass.”

The New York Times added that the contents of other floors were badly damaged by water and increased the estimate of damages to $10,000.  The other tenants in the building at the time were William Wood & Co.; another publisher, Fords, Howard & Hulbert; and S. & T. E. Harris, clothing manufacturers.

William Wood & Co. moved out the following year; but Fords, Howard & Hulbert—the last of the publishing firms in the building—would remain into the new century.    John R. Howard was president of that company.  Wealthy and respected, he lived in Montclair, New Jersey.  The Times noted “The family is very prominent in Monclair, Mr. Howard being Trustee of the First Congregational Church.”

Howard’s son, Edward Fords Howard, was “very prominent among the young people” and was enrolled at Yale in 1903.  He was absent from campus for two days on February 28; but his friends assumed he had gone home to visit.  Then on the afternoon of February 28 two Yale students were walking along the edge of a rocky cliff when they discovered the young man’s body halfway down the rocky face.

Newspapers called it “a mysterious death” and The New York Times reported “From the position of the body when found it was impossible to decide whether or not it was a case of accidental death.”  The mystery was, apparently, never solved.

In 1901 Charles E. Heymann, “importer of raw ostrich feathers” moved in.  He would stay in the building for two decades. 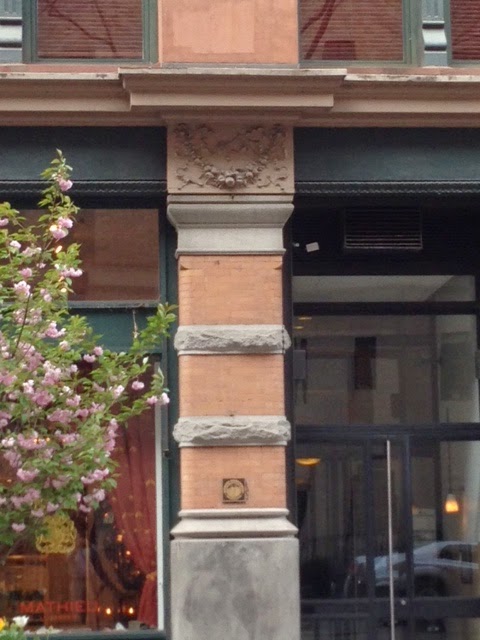 Other garment-related firms to move in included that operated by James Tobias.    The furrier was 51 years old in 1906 and suffered recurring headaches.  On September 2 that year he sent a servant to the drug store for headache powders.   He took the medications then “rolled from his chair and died almost instantly,” according to The Times.   His wife told investigators he had been taking headache powders for about a year.

Heymann was apparently the victim of a massive stroke.  “An investigation will be made,” said the newspaper.

Other garment companies in the building included Silverman Bros. which took the fifth floor in 1914; Blackfort-Mintz Co. on the second floor the following year; and Bonar Phelps & Co., manufacturers of straw hats.

No. 43-47 East 10th Street continued to house apparel firms through the 1930s.  When the K. W. Improvement Company purchased the building in June 1939, it announced plans for “extensive alterations.”  It was assessed at the time of the sale at $100,000.

The new owner’s alterations happily did not extend to the façade.  Richard Berger’s handsome design survived unchanged—right down to the storefronts—throughout the century.  In 1973 the last industrial tenant moved out as the building was converted to residential space.  Today there are ten apartments per floors above the ground level in the imposing brick loft building.