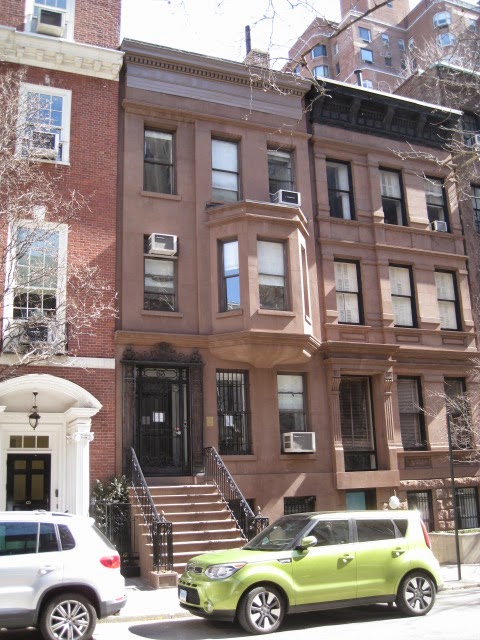 By the late 1880s the upscale tone of the neighborhoods east of Central Park spilled as far east as Fourth Avenue (later renamed Park Avenue).  Earlier structures on the blocks between Madison and Park were being razed and vacant lots quickly saw the rise of commodious homes.  On June 16, 1888 the Real Estate Record & Builders’ Guide reported on one such project.

The Guide noted that Sarah E. Bussell and Samuel B. Wray, who acted as both builders and architects, planned to erect “two three-story brick and stone dwellings” at Nos. 63 and 65 East 91st Street, “cost $12,000 each.”  The construction cost would translate to about $303,000 each today.

Completed a year later, the 17-room homes sat on rough-cut brownstone English basements.  Steep stone stoops led to the parlor floors.  No. 63 featured a three-sided bay at the second floor that projected far from the façade.  Bussell & Wray splashed the houses with Queen Anne elements, bringing them to the cutting edge of trendy domestic architecture; yet maintained a staid appearance.

No. 63 saw several owners, including Andrew A. Smith who purchased it in 1901.  But Dr. Edward Anthony Spitzka, who moved his practice here in 1915 from No. 66 East 73rd Street, would be the home’s most notable resident.  The doctor’s father, neurologist Edward Charles Spitzka, testified to the insanity of President Garfield’s assassin, Charles J. Guiteau.  It was no doubt his father’s intense interest into diseases of the nervous system and the workings of the lower brain that led Spitzka to his work with the human brain.

Following William McKinley’s murder in 1901, Anthony Spitzka autopsied the brain of the President's assassin, Leon Frank Czolgosz.  In 1909 Who’s Who in New York City and State noted he “has examined brains of many criminals of various races (Eskimos, Papuans, Negroes, Japanese, Andamanese, Nicobarese, etc.), [and] studied brains of notables.”  It added that he was “also interested in subject of crime and punishment; death by electricity, etc.”

Spitzka, who was 39 years old when he moved into the house, was married to the former Katharine Wacek.  If some thought Edward Spitzka’s experiments were a bit ghoulish, they probably found his sense of humor rather dark as well.  A year after moving into the East 91st Street residence, he wrote a note to a physician who had recently protested against the use of adrenaline to treat Infantile Paralysis.

“Dear Doctor Talmey:  I cannot help dropping you a line of approval of your article in the New York Medical Journal today.  To the bushel baskets full of ovaries, removed twenty-five years ago, some are attempting to add vats full of tonsils; and—if they could—would add all Peyer’s patches.”

Like many expert surgeons and doctors, Edward A. Spitzka abandoned his private practice when the United States entered World War I.  He rose to the rank of Lieutenant Colonel, commanding the 311th Sanitary Train in the American Expeditionary Forces in France.  In March 1919 he returned home to resume his practice; although he retained his rank as Lt. Colonel in the Army Reserves.

Spitzka was a member of the American Anthropometric Society, formed to study the measurements of the human body; and in his particular case, the brain.  In 1904 he had convinced the esteemed Dr. Joseph Simms, who had lectured throughout the world since 1854, to bequeath his body to Dr. Spitzka.

Spitzka would have to wait another 16 years for Simms to die.   In April 1920 the doctor died of apoplexy at the age of 87.  “Mrs. Simms sent word to Dr. Spitzka on Sunday immediately after her husband’s death,” reported The New York Times on April 13, 1920.

The newspaper said “Pursuant to his wish expressed to his wife, Mrs. Jemima Sinclair Simms, who survived him, and also stated in his will, no funeral services will be held for the reason that his body was delivered yesterday to Dr. Edward Anthony Spitzka of 63 East Ninety-first Street.”

The doctor wasted no time in getting to work.  “Dr. Spitzka at once removed the brain in order to preserve it, and weighed it.  He stated last night that the weight was 1,520 grams, or 53.58 ounce.  He said that, considering the fact that Dr. Simms was nearly 87 years old, the weight was above normal.”


Edward Anthony Spitzka died of a fatal stroke in 1922.  The medical tradition of No. 63 was continued when Dr. Russell Hugo Patterson bought the house “for his office and residence” in 1946.  He and his wife had four children.  Like Spitzka, he served in the army and in 1948 was awarded the Legion of Merit for his service during World War II.

At some point much of the exterior detail was shaved flat, the cornice was replaced with an historically-incorrect, understated substitute, and the entrance was given an elaborate cast iron frame.

The Patterson family stayed on in the house until about 1959 when it was sold to Preston Less Sutphen, Jr. and his wife, the former Martha Eastin Rusk.   The pair had been married in 1953.  Martha was the daughter of Dr. Howard A. Rusk, founder of the Rusk Institute of Rehabilitation Medicine.  The Sutphens had four daughters and beginning in 1958, Preston was the President of Steamship Agents and Brokers.

The family maintained a home in Southampton and when in Manhattan, Martha taught.  She was an instructor of French at the exclusive Buckley School, and of writing to teachers at Lehman College.  Yet, according to The Sag Harbor Express years later, “Her favorite job was teaching English in the New York City public school system.”

Preston Less Sutphen, Jr. died in May 1986.  Martha lived on in venerable house until 1990 when she sold it for $2 million to The Dalton School.  The upscale school, which already encompassed Nos. 53 through 61 East 91st Street, intended what assistant headmaster Frank J. Carnabuci described as “a major overhaul.” 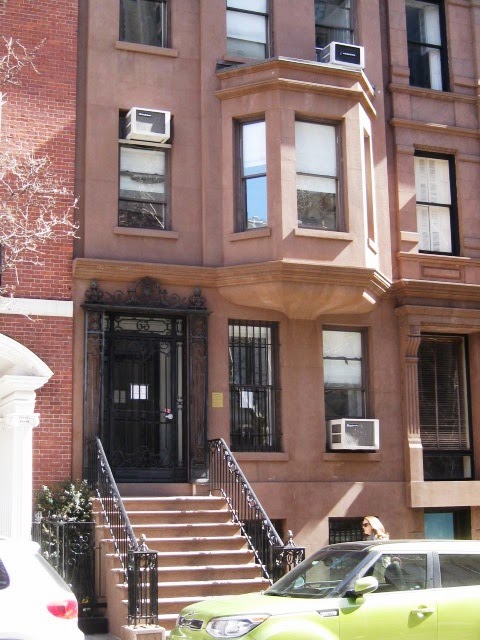 The firm of Helpern Architects was commissioned to transform the gracious Victorian into classrooms and offices.  The conversation, completed in 1992, preserved the outward appearance—a stark contrast to the school’s abutting neo-Georgian buildings.