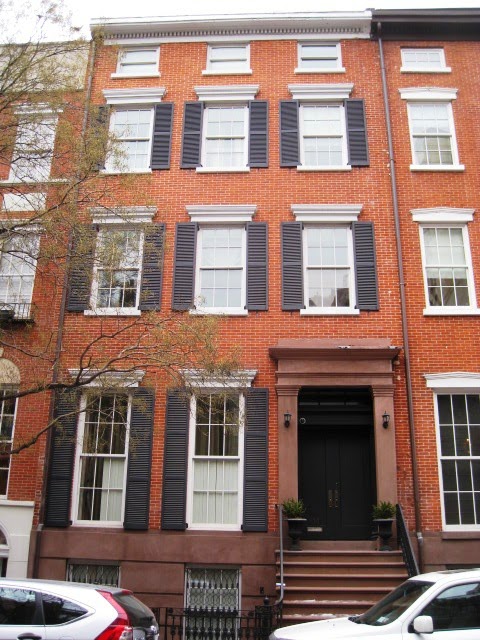 When wealthy merchant Asaph Stone began construction on his lavish townhouse at No. 107 Waverley Place in 1839, he extended the project to include two nearly matching speculative homes at Nos. 109 and 111.   Completed in 1840 the three residences, just steps from Washington Square, were characterized by refined taste and upscale domestic design.

Stone gave his own home some added touches—like the extraordinary ironwork balcony and railings.  But he did not scrimp on the other houses.  No. 111, like its twin neighbor at 109, featured handsome iron railings and fences which carried on the Greek Revival motif, broad double entrance doors, and floor-to-ceiling windows at the parlor level.

Following Underhill in the house was the Charles H. Raberg family.  A well-respected businessman, Raberg had been a member of the Chamber of Commerce of the State of New York since 1839, the same year Asaph Stone started construction of No. 111 Waverley Place.  In 1850 Raberg was elected a member of its Arbitration Committee.  His office was at No. 107 Cedar Street.

Tragically, Raberg’s youngest son, Edward Leon, died in the house on Tuesday afternoon, April, 8, 1862 of “disease of the heart.”  Edward would have been 16 years old in three weeks.  For the second time in just seven years, a funeral took place in No. 111 Waverley Place.

As friends and family filed into the Raberg house for Edward’s funeral, civil war was already raging in the South.  The conflict would touch the lives, somehow, of every family in the city.  Edward’s older brother, Charles H. Raberg, Jr., had answered the call by enlisting in the New York National Guard.

War took priority over romance for Charles; but on Thursday, September 21, 1865 just five months after the Confederate surrender, he was home to marry Sallie Duckwitz of Brooklyn.  Seven months later he was promoted to Second Lieutenant.

In the second half of the 19th century millionaires slowly migrated northward in a constant attempt to stay ahead of the expanding commercial district.  The elegant Washington Square, ringed with staid brick residences of old New York families, was an exception.  As the turn of the century approached the residents of the Square tended to ignore the social changes and remain in their family mansions.

This was not the case with the blocks extending off the park.  By 1882 No. 111 Waverley Place was being operated as a high-end boarding house.  An advertisement on Sunday, July 9 in the New York Herald announced “Nicely furnished front room, on second floor with or without board; modern improvements.”

The boarding house was run by a Miss Cameron.   When T. Shimooka arrived in New York in 1884, he took a room here.  Looking for work, he placed an ad in The Photographic Times: “As Dark-room Operator or Printer—I have been employed in photo. business for many years in Japan.  Want a situation in a gallery as dark-room operator or printer—T. Shimooka, Japanese”

Among the most visible of the boarders in the 1890s was Leslie A. Toke.   In the heyday of the social reform movement, coupled with the rise of socialist ideals, Toke was a well-known activist.  In 1899 the Labour Annual: The Reformers’ Yearbook listed him at No. 111 Waverley under its “Directory of Useful Addresses.”

Toke would write stirring publications, many aimed directly at the Roman Catholic Church; including his The Catholic Church and the Sweating System; an expose of social conditions entitled The Housing Problem; The Rationalistic Propaganda; and Why the Pope has Condemned Communism.

As artists were drawn to Greenwich Village in the first years of the 20th century, Charlotte Weber-Ditzler moved into No. 111 Waverley Place by 1908.  Born in Philadelphia, she studied in Munich. Now she busied herself illustrating books and magazine covers—competing with New York’s most illustrious illustrators.

The house became the property of The New York Bible Society and throughout the first half of the century respectable boarders came and went—like F. A. Schwalmayer, a partner in The Holland Nitro Lamp Co., Inc. who rented here in 1916.   When the Society sold the house in 1946, The New York Times described it as a “four-story remodeled apartment building.”  Despite the description, little had changed to the outward appearance of the 1840 residence.

Margaret M. Hanley took possession of the house, which was assessed that year at $33,000 (just under $400,000 today).  By now "Waverly" had lost its second “e.”
The house received its moment in the spotlight in 1967 when it was used as the exterior of the Bratters’ apartment building in the motion picture Barefoot in the Park.  Although it was supposedly on West 10th Street, New York audiences were not fooled.

At the time the windows had been replaced and the brownstone lintels and sills showed the chips and wear of 130 years.  Utilitarian entrance doors with brass kick plates took the place of the elegant Greek Revival originals.  At some point within the next few years the brownstone enframement would be painted white.  One can only scratch his head and wonder why someone thought that was a good idea.

Then in 2008 a careful restoration and renovation returned No. 111 Waverly Place to a single family home.  Having escaped modernization it looks very much as it did in its pre-Civil War glory days.