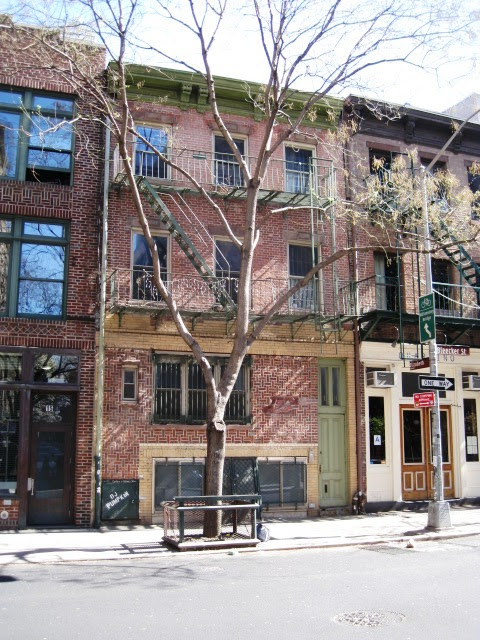 Like almost all wealthy New Yorkers at the beginning of the 19th century, Anthony Lispenard Bleecker owned an estate north of the city.  He was not only a banker, but a well-known merchant, real estate operator, and auctioneer.  Only two years after his death on April 26, 1816 houses began appearing along Bleecker Street, the former lane that ran more-or-less east and west through the Bleecker “farm.”

Around 1822 Stephen J. Brinckerhoff purchased lots from Arthur Smith on Bleecker Street, just off the Bowery, and constructed middle-class homes at Nos. 11, 13 and 15.   Like its neighbors, No. 13 would have been two-and-a-half stories tall, clad in Flemish bond red brick, and intended for a middle-class family.

In 1832 the house was purchased by George Wheeler, a merchant tailor.  Almost simultaneously he bought No. 15; apparently as an income-producing property.  Wheeler shared No. 13 with his boarders, including Humphrey and Clarinda Phelps who were living here that same year.  The charitable Mrs. Phelps was Treasurer of the Stanton-Street Female Education and Home Missionary Society.

Despite her personal donation of $20 (more than $560 today); the Society was in trouble.  A report in 1832 revealed “the society found their number of members diminished about one half.  They are still determined, however, to do what they can for the cause of Christ.”

Humphrey and Clarinda would live in the house at least through 1842.  Henry Phelps was a merchant; but what he sold is unclear.   In 1842 Longworth’s Directory listed him as selling “maps” in his Bowery store; yet that same year the New York City Directory said he sold “lamps.”  One of the directories, it would seem, made a typo.

Other boarders included Charles Turell in 1837, an editor; George Montgomery in 1841 whose butcher shop was at No. 19 Fulton Street; and George Coleman in 1842 with no profession listed.

Young George B. Wheeler no doubt pleased his parents greatly when, along with his diploma, he received an award for “the second best specimens of penmanship” from the American Institute of the City of New-York in 1856.

Boarders enjoyed the use of the common areas in No. 13.  When 87 year-old Caleb Coles died on March 30, 1857, his funeral was held in the house three days later.

By 1865 the Bowery neighborhood was showing uncomfortable signs of decline.   On July 25 that year the trial of William Sherman commenced.  He was charged with running a “disorderly house” at No. 3 Bleecker Street.   On the stand, Policeman William J. McKilvey said the Sherman Cottage was “a house of assignation, and was the resort of women of bad repute.”

George Wheeler also testified.  The New York Times reported that he told the court “he could not go out and in his house, even in the day time, without finding these street-walkers parading before his doors, and when they met men they solicited them down to ‘Sherman’s Cottage;’ it was a great annoyance to himself and his family.”

The new owner lost no time in renovating the old house.  The once-quiet neighborhood was highly commercial by now and on August 16, 1876 the Real Estate Record & Builders’ Guide reported that Bohler had hired architects and builders B. Schlaff & Son to alter the front.  Converting the first floor to a “store” cost Bohler $250.

Unfortunately, his investment did not give him the returns he anticipated.   On August 18, 1877 he lost the “three story brick store and dwelling” to Catharine E. Stewart.   The $8,500 she paid was $4,250 less than Bohler had invested in it.

Catharine Stewart’s boarders we mostly immigrants and all of them were of scant means.  Mary Quinn lived upstairs when Catharine took possession.  That year she would be pulled into a messy domestic situation.

In July that year William F. Ingersoll had assaulted former Assemblyman Hayes “for alleged intimacy with his wife.”  Now, in October, Mary Elizabeth Ingersoll sued her husband for divorce.  She tried to divert the public's attention from her purported affair with the Assemblyman by her own scandalous charges

The New York Times reported “In her complaint Mrs. Ingersoll charges her husband with having committed adultery with one Mary Quinn, of No. 13 Bleecker-street, on September 22 last.”

Ingersoll denied the affair; and countered that his wife and son were being supported by Hayes.  He added “that at one time he saved her from being sent to the State Prison, and that she only sues for a divorce to prevent the interference of her relations with Hayes, as she offered him $100 recently for the privilege of being allowed to prove by witnesses an act on his part which would give her a divorce.”

Also living in the house at the time was William Maring, an “agent.”

In October 1879 Catharine Stewart leased the building to Elsie Walters for two years at $1,050 per year.   As the neighborhood was engulfed by the fur district, the low-income boarders gave way to commercial tenants.

Five years later the names had changed, but the activities of the tenants were the same.  Geller & Madler made “fur garments;” Steinberg, Beglickter & Co. sold furs; and Zwerdling & Benjaming dealt in “lamb plates.”  On the ground floor was Antoine Alvise’s machine shop.

No. 13 was still owned by Catharine E. Stewart’s estate when, in 1913, new storefronts were installed.  The architect, Harry Hurwitz, forgot one thing, however.   The following year the owners were cited by the city for lack of fire escapes.

The building continued to house furriers and fur-related firms into the 1920s.  In 1925 owner Rebecca Baker had yet another new storefront installed.  This one was designed by Jacob Fisher and included a jazzy 1920s basketweave brick pattern.

As the Bowery and Noho districts were revived toward the end of the 20th century, so was No. 13 Bleecker Street.  A near-gut renovation resulted in a studio and workshop in the old shop space; a single apartment on the second floor; and a duplex apartment above.  It was listed recently for $3.5 million.

To the passerby, however, the quirky combination of architectural styles and elements gives no hint of the long and varied history of the nearly 200-year old house.