In 1882 James D. McCabe, Jr. predicted a building boom on the sparsely-developed Upper West Side.  "Instead of expending $30,000 to $50,000 for a corner lot on Fifth avenue, from four to six lots can here be now purchased for that sum, and the indications are that men of foresight and good judgment are availing themselves of the chances that are thus offered."

Within the decade McCabe was proved right.  Among the developers "of foresight" who transformed the Upper West Side was George A. Denig.  In 1893 he laid plans for six rowhouses on the north side of West 79th Street, between Columbus and Amsterdam Avenues.  Denig commissioned architect Clarence True to design the row.

The prolific True was responsible for scores of residences on the Upper West Side.   He drew his inspiration most often from historic styles, freely mixing elements to produce sometimes whimsical, sometimes romantic structures.

On June 10, 1893 the Real Estate Record and Builders’ Guide reported that True had filed plans for the six “four-and-a-half-story stone dwellings.”    For the project he turned to Romanesque Revival, designing the six harmonious houses to form a visual unit—each most likely slightly different; yet flowing one into the other to create a castle-like whole.

Despite their compact width—three were 16-feet wide and three 17-feet—Denig’s speculative homes were targeted to the upper-middle class.  Each cost him $17,000 to build—more than $454,000 today.  Included in the row was No. 163, one of the 17-foot wide homes.  Completed in 1894, like its neighbors it the boasted the romantic elements of a medieval castle.  Rather than the more expected brownstone, rough-cut limestone was used in the quoins, the lower facade and the face of the upper gable.  True incorporated carved decorative panels, a sharply-angled three story bay and a commodious balcony at the fourth floor that probably doubled as a sleeping porch on hot nights. 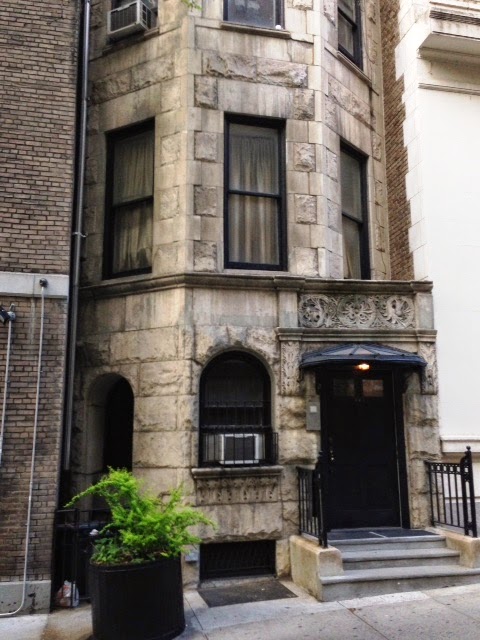 Inside, according to an advertisement in the New-York Tribune, were a “butler’s pantry, 14 rooms and two baths; hardwood trim, open plumbing, gas, electricity.”

The house was purchased by Andrew Jay Coleman Foye.  The 61-year old was President of the Standard Graphite Co. and was married to the former Katherine Sophia House.  With them in the new home were their two sons, Andrew Ernest and 17-year old Louis Constant Foye.

Young Andrew was a civil engineer and member of the firm Foster & Foye.  He also taught engineering in the School of Mines.

The Foye family was proud of its French Huguenot descent and of their ancestors’ military service during the Revolutionary War.  But Andrew J. C. Coleman was by no means of privileged birth.  Who’s Who in New York City and State would later record that his first home in Ohio “was a double log cabin” and that his “early education [was] acquired in a log school house.”

Now, in addition to his presidency of the Standard Graphite Co., he was a director in the Ryan-Parker Construction Co., the Consolidated National Bank, and a respected member of the New York Chamber of Commerce.

Andrew  J. C. Foye was one of the founders of the Ohio Society and its first vice-president.   Early in 1900 the group invited President William McKinley to a dinner at the Waldorf-Astoria Hotel.  The President accepted the invitation “to be present,” but according to the New-York Tribune, he “insisted that he should not be called upon to speak.”

McKinley’s insistence on not speaking melted away after a toast to his health and “he permitted himself to dwell briefly upon the problems which the Nation’s Spanish war had left with the country.”  Specifically he addressed imperialism, saying in part “There can be no imperialism.  Those who fear it are against it.  Those who have faith in the Republic are against it.  So that there is universal abhorrence for it and unanimous opposition to it.”

The Tribune reported that “In a box specially reserved for her, facing the guests’ table, Mrs. McKinley sat.  She came in before the last course was served, and was greeted with tumultuous cheering.”  The newspaper noted that sitting near the First Lady was Mrs. Andrew J. C. Foye.

During the first week of May, 1905, Andrew J. C. Foye became ill.  Three weeks later, on Friday May 26, he died in the house at the age of 71.   In reporting his death, the Ohio Society of New York described him in florid turn-of-the-century prose. 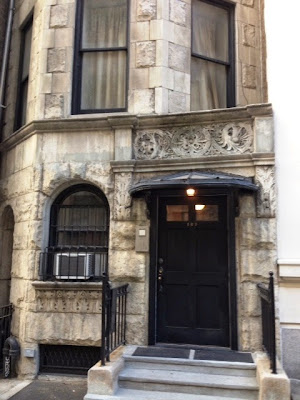 “Few men were endowed so generously with the helpful spirit as he.  The sick and suffering he visited and comforted; the worthy unfortunate he relieved and put in the way to help themselves.  The beggar never went hungry from his door.  His kindly nature embraced humanity in its care.”

The family kept the funeral and interment private.  For those wishing to pay respects, therefore, the New-York Tribune announced “The home will be open to relatives and friends on Sunday and Monday from 4 to 8 p.m.”

By now Andrew Ernest Foye had amassed his own fortune.  He was President and Director of the Andrew E. Foye Co., the Foye-Root Co., the Butte Copper Montana Co., the American Stone Paving Co., and the Hanover Realty and Construction Co.  His club memberships included four different yacht clubs.

Foye moved to No. 247 Fifth Avenue and the West 79th Street house was purchased by real estate operator Albert E. Ponter.   Five years later No. 163 was threatened when the four houses to the east were demolished for the 12-story apartment building designed by Schwartz & Gross.

The house survived, however, and in 1913 was sold at auction.   It became home to the family of H. E. Exton.  As was most often the case, the title was put in the name of Exton’s wife, Edna.  Exton was a partner in the brokerage firm of Exton & Newborg.   Like many of Manhattan’s wealthy Jewish families, the Extons summered at the upscale Long Branch, New Jersey.

For some reason when the rest of Clarence True’s row was demolished in 1923 for another apartment building—this one 15 stories—No. 163 hung on.   When Edna K. Exton sold the house in May 1929 to the Meydel Corporation, it was wedged in between the modern structures.

Later that year Helene Zeller leased the house for five years at $3,600 per year.  It was sold in 1936 to Rose Lowenstein and again in 1940 to Max Hoffman.   By now it was described as a “five-story apartment building.”


The Victorian holdout continues to have two apartments each on the first through fourth floor and one on the top level.    Vised between the two hulking apartment buildings, the narrow Romanesque house looks woefully squashed; a tempting hint of what Clarence True’s original row must have been. 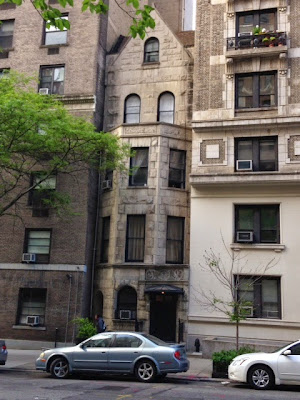