In 1858 Frederick Law Olmstead and Calvert Vaux began construction on the ambitious Central Park project.  Along the eastern side of the grounds ran the still-unpaved Fifth Avenue.  And branching away from the avenue, far to the north of Manhattan’s fashionable residential district, the side streets saw spotty development.

Throughout the next decade quaint wooden cottages appeared.  All similar, they sported front porches where the residents no doubt took advantage of the summer breezes each evening.  One of these was No. 3 East 83rd Street, a two-story clapboard house with an English basement.  The roof of the deep porch was balustraded and most likely doubled as a “sleeping porch” during the summer heat.

Henry C. Houghton had spent the Civil War years in the South.  Born in Boston on January 22, 1837, one of 14 children, he had been teaching physical culture and natural sciences in the North Yarmouth Academy “fitting school” for Bowdoin College, in Yarmouth, Maine, when the war broke out.

In March 1863 he volunteered for service in the United States Christian Commission and was sent to Fredericksburg.  Following the Battle of Stone River he was detailed to Nashville and put in charge of the Commission’s post there.  The American University Magazine later recalled “The strain of the duties in these positions was tremendous, and although of indomitable perseverance and endurance, he broke down with typho-malarial fever at Nashville, and, after a brief rest, was stationed at the Depot Field Hospital, at City Point.”   After the fall of Richmond, Houghton went there “while it was still burning” and helped transfer prisoners to the transports.

Following the end of the war Houghton returned to New York City in 1865.  In 1867 he was graduated from New York University and the following year he married Mary Ella Pratt whom he knew from Yarmouth, Maine.  The couple moved into the little wooden house at No. 3 East 83rd Street.

In 1870 he was appointed Professor of Physiology in the New York Homoeopathic Medical College and Hospital; and professor of Physiology in the New York Medical College and Hospital for Women.  Both he and Mary Ella participated actively in charitable causes.  From 1867 to 1869 Dr. Houghton was connected with the Five Points House of Industry, in Manhattan’s most infamous slum; and Mary Ella would become President of the Home for the Friendless.

Within the next few decades the once-rural area around the Houghton house would drastically change.  On March 30, 1880 the Metropolitan Museum of Art opened its new facility on the Park side of Fifth Avenue, visible from the East 83rd Street porch.   Further south, grand mansions of New York’s wealthiest citizens had already begun inching up the avenue.

Records of the residents of No. 3 East 83rd Street are sketchy at best throughout the last quarter of the 19th century.  Like the Houghtons, however, they were financially comfortable enough to afford domestic help.  On May 16, 1891 an advertisement appeared in The Sun:  “Young Girl for light housework.”

In 1902, when the Metropolitan Museum’s monumental new Beaux Arts edifice was completed, the family of Frank O. Roe was living in No. 3.   Roe was a banker with the Leather Manufacturers’ National Bank.   Son Irving L. Roe had graduated from Princeton in 1897 and the family routinely summered at the fashionable Lakewood, New Jersey.

The house was the scene of the marriage of Mrs. Roe’s cousin, Marion Bache to Brooklynite Hampton Howell on March 21, 1907.  Because Marion’s father was deceased, Frank Roe gave her away.  The New York Times remarked “The house was decorated with Spring flowers, including tulips, roses, ferns, and palms.”

The Roes retained possession of the house at least until 1917.  It appears they leased it briefly to actress and theater owner Maxine Elliott.  The stage star came and went from New York to Europe routinely.  In 1914 playwright Catherine Chisholm Cushing told a reporter from Theatre Magazine “It was Maxine Elliott who gave me the first actual encouragement I ever received as a dramatist.”

Cushing related her disappointment at being rebuffed by agents and producers.  Then “I wrote a play about a woman who had married and borne children and ‘let herself go.’  She allowed her talents to become dim. All her accomplishments lapsed.  She seemed to care not at all for how she looked.  I called it ‘The Peacock and the Goose.”

She sent it to Maxine Elliott, who owned the Maxine Elliott Theatre at No. 109 West 39th Street and preferred to stage works by women.   Four days later Cushing received a letter from Maxine, who was playing in Chicago.

“I love your play.  The freshness and brightness of it have charmed me.  I want to see you and talk about it as soon as I come to New York.  I shall be at my town house, No. 3 East Eighty-third Street on Sunday, and will hope to see you.”

Catherine Chisholm Cushing saw Maxine in the library of the little house.  She described it saying “You’ve seen it, the lovely open fireplace and the room that, like the house, looks so much like her?” 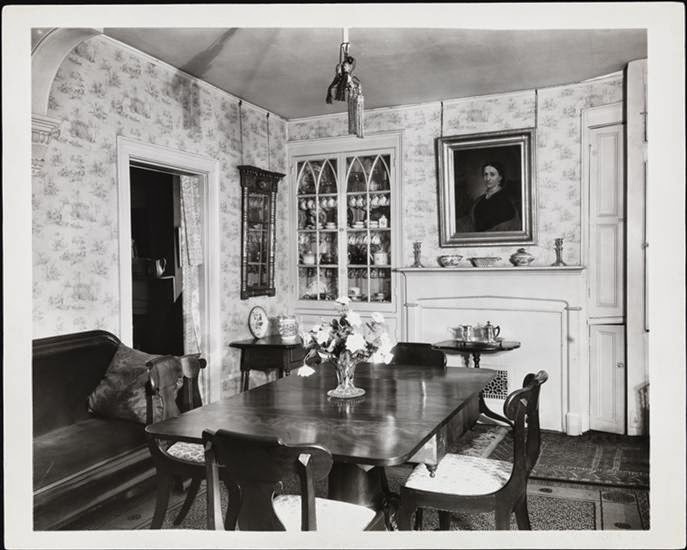 By the time Catherine Chisholm Cushing talked business with Maxine Elliott, the neighborhood was filled with opulent mansions.  But the architectural version of the country mouse somehow had survived.   Following the Roe family, the house would have a relatively rapid succession of residents. 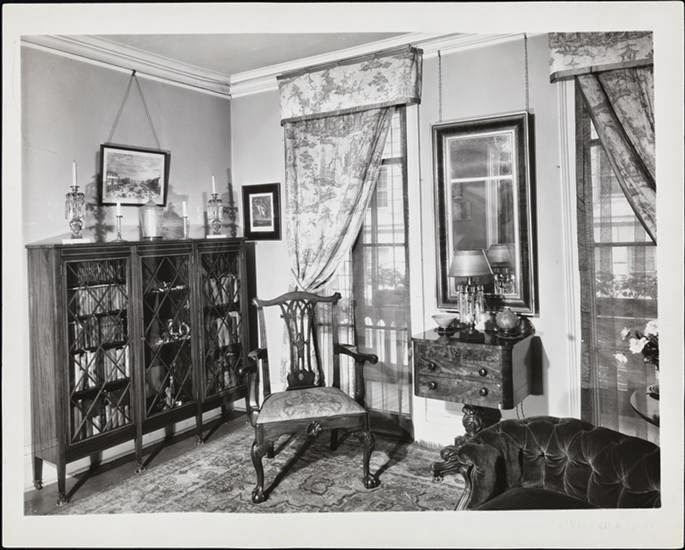 Until 1927 Melissa Salisbury lived in the house, followed by Katherine E. Day.  Katherine would never marry; instead she devoted her life to teaching.  She was quickly followed by J. P. Taylor Armstrong and his family who moved in by 1932.  The Armstrongs had a summer house in New London, Connecticut.  An avid golfer, Armstrong was President of the Shenecossett Club.

During the Depression years the Federal Writers’ Project published a series of travel guides, including the 1939 New York City Guide.  In writing about the Metropolitan Museum of Art, it told readers “and just across the avenue, at 3 East Eighty-third Street, amid a row of mansions, is an incongruous, two-story frame house with a horseshoe nailed above its door.”

Unfortunately for the clapboard house, by mid century its real estate value along with that of the two matching brownstone mansions at Nos. 7 and 9 and the vacant lot at No. 5 far outweighed charm and history.  In 1953 the family of Leonard E. Bruce was living in the white-painted house with its shady porch and little front yard.
On March 19 that year The New York Times wrote “The buds on the shrubbery outside the old frame house at 3 East Eighty-third Street, just off Fifth Avenue, are sprouting hard.  And well they may, for next year they and the house itself will be gone.  The City’s growth, which has struck all around them, is about to replace them and neighborhood structures with a twelve-story apartment building, with penthouse.”


The 16-story cooperative white-brick building designed by H. L. Feldman that replaced the old structures was completed in 1955 and survives today.  All memory of the little “incongruous” wooden house with the horseshoe above its door is long forgotten.
Posted by Tom Miller at 2:31 AM