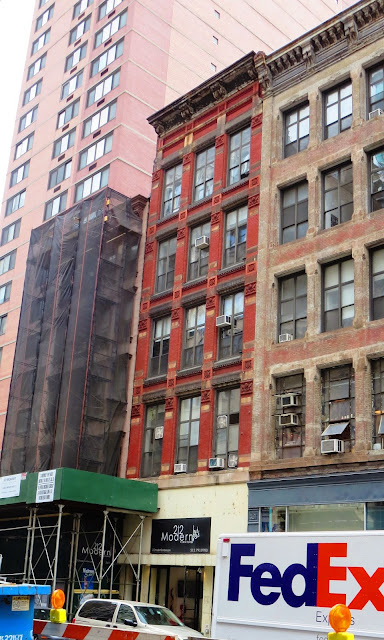 The blocks of Broadway just south of Canal Street saw incredible change during the 19th century.  In the 1830s and through the mid-1840s Richard Kingsland lived in the 25-foot wide house at No. 370 Broadway.  The well-to-do hardware merchant operated his business at No. 89 Maiden Lane.  But by 1848 the Kingsland house had been replaced by a commercial building where Collins & Brother, publishers operated through the 1870s.

That building, too, would not last.  On April 17, 1880 the Real Estate Record and Builders’ Guide reported that John Jay and Edmund B. Aymar intended to replace the structure with a “five-story brick store” extending through to Courtlandt Alley.   The men had chosen architect-brothers David and John Jardine to design the building.

All around the site stone-faced Italianate-style office and loft buildings had already appeared.  But D. & J. Jardine would go in a different, trendier direction.  They turned to neo-Grec, updating it with liberal splashes of Queen Anne decoration.  The red brick façade was ornamented with terra cotta tiles and panels featuring popular design elements of the period—sunflowers, ferns and stylized leaves.  The architects softened the corners of the openings with bullnosed brick.  The stone lintels were delicately carved with a floral motif, nearly unperceivable from the street; and the  sills dripped with rounded dentils. 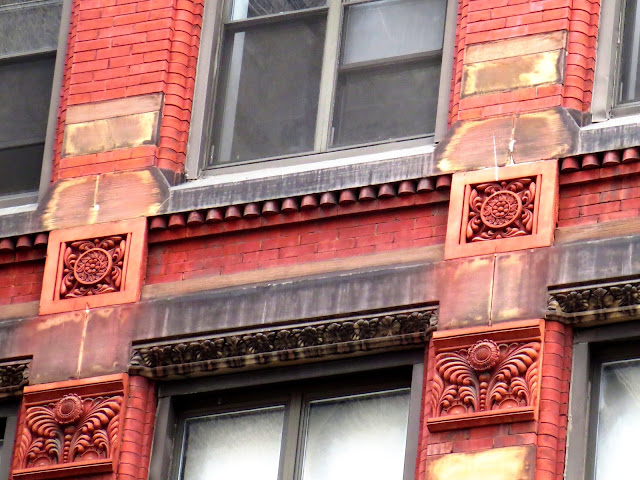 The building was completed within the year, costing Jay and Aymar $35,000—about $825,000 today.  The store space on the first floor became home to Butler Brothers, “dealers in hosiery and notions,” while the upper floors were reserved for light manufacturing.  William Maas & Co., “manufacturers of jet goods and jewelry,” occupied the second and third floors.  The fourth and fifth floors were joined with No. 368 Broadway by internal doorways. Here Danzig & Feuchtwanger made underwear and Danzig Brothers produced ladies’ suits.  A central skylight provided additional light to the interior of all the floors.

The clothing factories on the uppermost floors employed about 100 girls.  Wood-burning stoves not only provided warmth during the winter months, but heated the smoothing irons.   When the floors were closed up on the evening of January 7, 1882 at least one of the stoves was left burning.

Just after 6:00 that night William H. Hall, a Butler Brothers salesman, was standing under the skylight area.  He glanced up to see the glow of flames on the fourth floor.  Firemen rushed to the building and lugged their fire hoses as far as the third floor, where they found the stairway boarded up.

“They were compelled to retreat, and then carried their hose up ladders placed against the rear of the building on Courtlandt-alley,” reported The New York Times the following day.  Other fire companies responded and hoses were hauled to the roofs of adjoining buildings.  As they fought the fire, the fourth and fifth floor windows on Broadway burst out, showering the sidewalk with glass.  An hour after it was discovered, the fire was extinguished.

“The building is owned by the Hon. John Jay, and can be put in proper repair for $5,000,” said The Times.  “The fire is supposed to have originated from the upsetting of a stove.”

A month later, on February 3, plans were filed for repairs to the building.  The Times’ estimate was not far off.  Contractor E. Smith placed the cost at $4,677.

On April 14, 1888 Edmund B. Aymar sold his one-third share in the property to Jay’s wife, Eleanor, for $51,667.  Wm. Maas & Co. was still in the building, along with its related firm Mass, Blum & Co., which manufactured leather goods.  Wm. Maas & Co. had been organized in 1867 and by 1886 was, according to Finance and Industry “one of the most prominent houses engaged in manufacturing novelties and fancy goods.”  It not only manufactured, but imported its goods.

By now they had taken an additional floor at No. 370 Broadway and established a large factory in Harlem.  Finance and Industry called the Broadway premises “very commodious and spacious…admirably arranged and equipped with every appliance and facility for the display of the varied stock, and the convenience of customers.”  The authors called William Maas and M. Blum, “gentlemen of the highest character and integrity, who are thoroughly conversant with every detail of the business, and are constantly placing before the trade the latest novelties.”

The top floor of the building was leased by Israel Levy, proprietor of the Excelsior Cloak Manufacturing Company.  His good fortune began a downturn on October 27, 1888 when he was arrested for fraud.  Robert Kell charged “that Levy had fraudulently disposed of his stock and cash, and then offered to settle with his creditors at 40 cents on a dollar.”   Levy managed to pull together the hefty $5,000 bail; more than $125,000 in today’s dollars.

The Excelsior Cloak Manufacturing Company was bankrupted by the scandalous affair.  But Levy would be back in the newspapers—and jail—two years later.  Officials discovered that when Levy realized his business would crumble, he gave large amounts of cash (as much as $70,000 in one instance) to other garment manufacturers, then signed loan agreements with them for the same amounts—in effect borrowing his own money.

When the list of creditors was compiled during the bankruptcy proceedings, the “lenders” were included.  When they received their payouts, they simply gave Levy his money back.  Israel Levy and three others were arrested on October 10, 1890 “for alleged fraudulent disposition of property.”

The factory space formerly rented by Levy was taken over by Lichtenstein & Lyons, wanother cloak manufacturer.  In 1891 the firm employed a bright 18-year old as its bookkeeper.  Unfortunately, Julius Kleiblatt was taking home more than his salary.  The teen was arrested on September 11, 1891 on grand larceny charges.  “It was alleged that for some time he has been defrauding the firm by raising the pay rolls and also by overcharging customers,” said The New York Times.  “He was held for trial.”

The firm suffered a tremendous blow on September 4, 1898 when its five-story Harlem factory building was all but destroyed by fire.  The New York Times called it “one of the fiercest that the department has combated in months, and for an hour the destruction of the entire block of buildings was threatened.”

One wall collapsed onto the street, nearly burying a fire engine and destroying it.  The cost to the owners, whom the newspaper called “manufacturers of bone, rubber, horn and ivory goods,” was estimated at $200,000.  The Times added “More than 300 persons, largely girls, will be thrown out of employment as a result.”

As the new century dawned, Wm. Maas & Co. abandoned No. 370 Broadway, to be replaced by linen dealers.  In 1905 Granite Linen Co. was here, joined by Crest Handkerchief Mfg. Co. and James Elliott & Co, purveyors of linens and handkerchiefs, by 1907.

On January 21, 1911 the Real Estate Record and Builders’ Guide reported that the John Jay Estate had sold the building to F. S. Jerome and James H. Wright.  The New York Times announced that the property “was resold almost immediately” to Carson G. Peck, who owned the building next door at No. 372.  Peck, who was a business partner of F. W. Woolworth, paid around $135,000 for the building; almost four times the original cost.

Dry goods firms would continue to call No. 370 home for decades.  James Elliott & Co. was still here into the 1920s, as was Tile Crafton Company, Inc., sellers of blankets and bedspreads.

The Great Depression hit many companies hard, including the exporting firm run by 40-year old Julius Stern in the building in 1930.  Stern lived in Lawrence, Long Island and on the afternoon of November 6 that year he telephoned his doctor saying he was not feeling well.  It was the beginning of a most bizarre episode.

When Dr. J. Barnett arrived, Stern excused himself and went into another room.  “A few moments later he returned holding a bottle of poison, staggered a few steps and fell at the doctor’s feet,” reported the New York Times the next day.  Despite the doctor’s antidote and two hours of care at St. Joseph’s Hospital in Far Rockaway, he died from the poison.

“The police declared that Stern was an exporter with offices at 370 Broadway, and that he had been despondent because of business depression,” said The Times.

The second half of the century saw No. 370 filled mostly with small civic or political offices, including the Bureau of Public Information and the Committee for Better Transportation for New York. 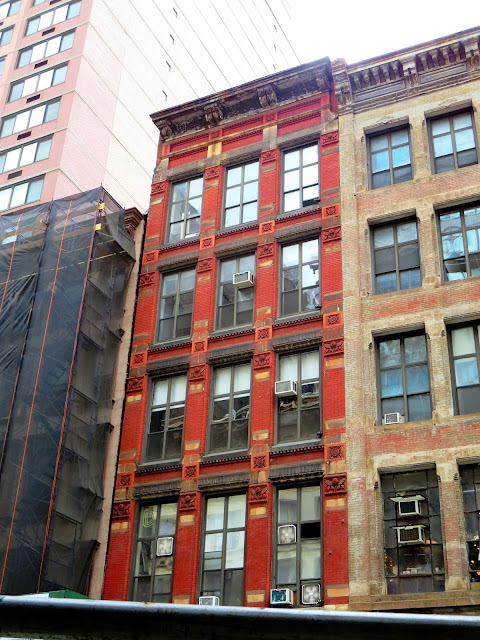 photographs by the autor
Posted by Tom Miller at 2:58 AM