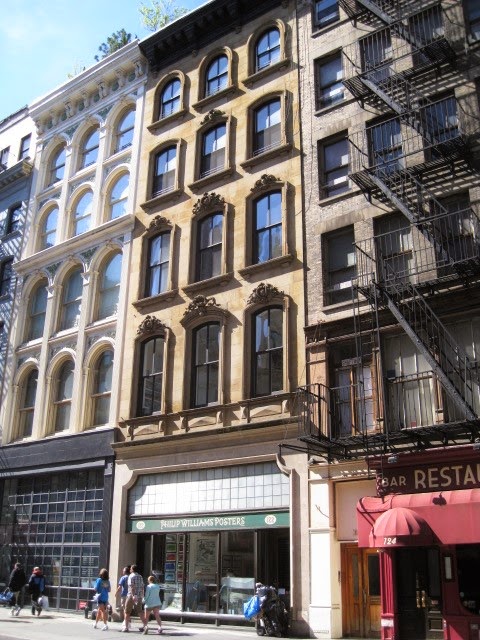 In 1818 Isaac Jones Jr. married Mary Mason, the daughter of fabulously wealthy banker John Mason.  Jones erected a house for his bride on land owned by his father, at No. 122 Chambers Street.  Directly behind their new residence was that of New York City Alderman William Hoghland, at No. 52 Warren Street.

Within the next two decades the inevitable taint of commerce would encroach on the high-end neighborhood and in 1839 the Joneses moved uptown to No. 734 Broadway.  The family retained possession of the Chambers Street property, however.  In her new home Mary Mason Jones, already established as the queen of New York society, would reign until being nudged out by the likes of Caroline Schermerhorn Astor.

In 1856 the property at No. 122 Chambers Street was inherited by Emily Jones.  The area around the old building now bustled with activity and she wasted no time in taking advantage of its income-producing potential.  Within the year she razed the old house, along with the former Hoghland property, in order to erect a handsome commercial building.  Completed a year later, the sandstone-faced building—with identical facades on Chambers and Warren Streets—was the last word in Victorian architecture.

The architect, whose name has been lost, created a remarkably attractive five-story Italianate-style store-and-loft building.  Above the storefront base each successive row of openings decreased slightly in height—an architectural slight-of-hand that made the structure visually taller.  Setting the building apart—and a step above--its otherwise similar neighbors were the exquisite carvings that sat diadem-like above the windows of the second through fourth floors. 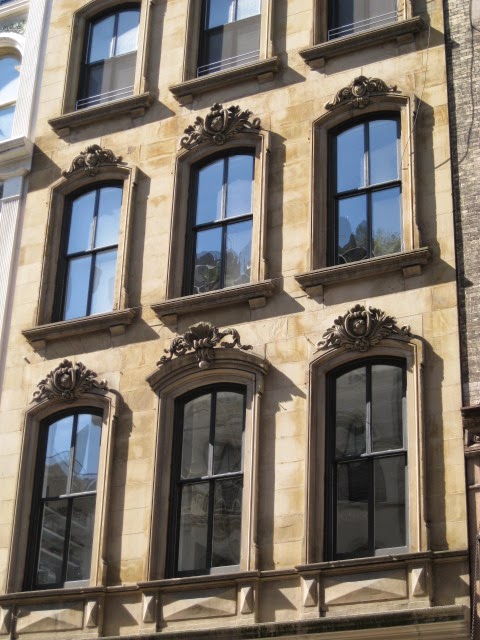 Directories listed Swift & Seaman, “hardware,” at both Nos. 122 Chambers and 52 Warren Street in 1858.  The firm, which would later become Swift, Seaman & Co., took up much of the building.  It specialized in harness brasses and saddlery hardware.  A related firm, Seaman Brother & Sniffin which also dealt in saddler hardware, operated in the building by 1865.

Harness maker and hardware dealer Abraham R. Van Nest Company was in the building by 1863, the year that it hired 16-year old Alpheus Lawrence as a mailroom boy.   The firm would remain in the building for nearly eight decades.

L. Minster’s significant operation was run by Lazarus Minster, Samuel Minster, Caroline Minster and Morris Kohn.  In the spring of 1865 the principals embarked on a rather nefarious scheme.

According to court papers later, they hired James Sherlock to purchase $10,876 worth of mittens and gloves from Isaac V. Place, a Gloversville, New York manufacturer.  In June that year the transaction was made and Sherlock promised to pay the invoice “within thirty or sixty days from their delivery.”

Sherlock signed the purchase agreement, never mentioning that the goods were actually being bought by L. Minster.   Investigation revealed “It was also a part of the design that Minster and Kohn should pay to Sherlock a liberal compensation for his services, and assist him to abscond from the State and country so that the plaintiff could not prosecute him for the goods.”

Once Sherlock had skipped town, the proprietors of L. Minster claimed “they had never ordered the goods, or authorized Sherlock to purchase them.”   Isaac Place sued, claiming that L. Minster had “procured goods…to the amount of about $11,000, fraudulently, and with the intent to cheat him out of them and not pay for them.”  The enormous stock of gloves and mittens would amount to about $160,000 wholesale value today.

In 1876 the building was filled with a variety of businesses.  Swift, Seaman & Co. was still here, sharing the address with Moses Falk, “sugars;” Joseph Hirsch, “segars;” Adolph Meyersbergh, who listed himself as “agent;” and McCafferty & Connelley, dealers in fancy goods.   Shoemaker James Griffin was on the second floor of the Warren Street side; and “leather and findings” dealers (makers of shoe parts) John P. Benjamin, and, later, Brown & Folk were also here.

Around 5:00 on the afternoon of Wednesday January 4, 1877 John P. Benjamin came across two men trying to force their way into the closed shop of James Griffin.  The feisty Benjamin attacked the two would-be thieves.  The New York Times reported that “One of the men turned on Mr. Benjamin and endeavored to strike him with a jimmy, but the merchant warded off the blow and knocked the burglar down.

All the commotion drew the attention of J. H. Steenberg whose office was on the top floor.  He rushed to Benjamin’s aid, attacking the other crook.   The four men fought “desperately” in the hallway until two policemen, Roundsman McArthur and Patrolman Garland came on the scene.  The Times reported that they “instantly brought the burglars to terms.”

Unlike many loft buildings which housed firms of the same industry--like dry goods or produce dealers--No. 122 Chambers Street continued to see a wide variety of businesses:  the shoe trade, printing, hardware and imported wines among them.

A long-term tenant by 1910 was Topping Brothers, run by Frederick, Joseph P. and Herbert W. Topping.  The firm dealt in wholesale heavy-duty hardware such as spikes, ship locks and latches, and tackle blocks.  It would remain in the building into the 1920s.

In November 1910 the firm sent out to architects “an attractively prepared book describing in detail the operations of the ‘Mechanigraph,’ which is a machine for making reproductions of blueprints from original drawings without tracing by a mechano-chemic process,” reported the Real Estate Record & Builders’ Guide.

In 1918 Abraham R. Van Nest Company was succeeded by Bartley Brothers & Hall, a saddler importer which was founded in London in 1791.  The combined concerns stayed on the building following the merger.  Remarkably, Alpheus Lawrence the mailroom boy who was hired in 1863, was still with the company and was kept on in the shipping department.

Firms in the silk industry were leasing space by now.  In 1919 tenants included the Fulton Silk Co., General Piece Dye Works, the Metropolitan Silk Co., and the Eagle Silk Co.  But a far different type of tenant moved onto the fourth floor of No. 122 Chambers Street in the early 1920s.  R. H. McMann, Inc. was a radio supply store.   The firm found itself the unlucky target of thieves eager to get their hands on the expensive radio tubes.  In March 1923 robbers made off with $2,000 worth of radio supplies; then on Wednesday, November 5 the following year “thieves drove off with a truck loaded with tubes valued at more than $3,500,” as reported by The New York Times.

But that was not the end of it.  Only three days later, on Saturday November 8, 1924, another burglary was discovered when the store was opened for business.  This time radio tubes valued at $15,000 had been taken. 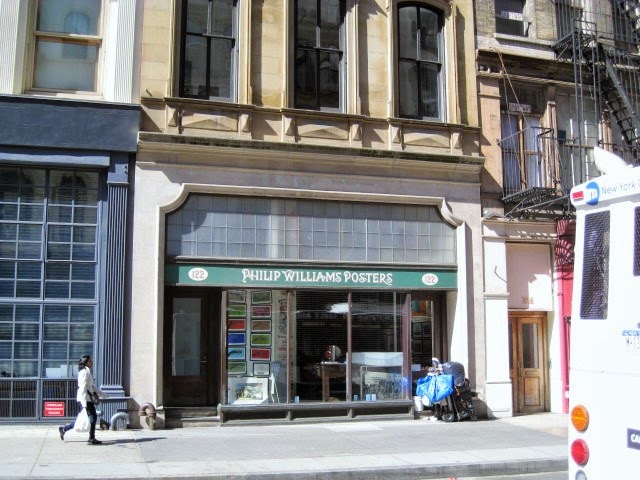 On February 28, 1928 Bartley Brothers & Hall lost their oldest employee.    Alpheus Lawrence died in his Brooklyn home at the age of 81.  He was the same mailroom boy who had started working in the building 65 years earlier for Abraham R. Van  Nest Company.  “From the time he obtained his first position until his death,” said The New York Times, “Mr. Lawrence went to work at the same address every day.”

By 1930 Cornelius Bertschinger ran his Hudson Sporting Goods store on the third floor of the Warren Street side of the building.  It was a time when the cities like Chicago and New York struggled in the grip of gangsters who ran speakeasies, gambling dens and houses of prostitution.   On September 17, 1930 The New York Times reported that Bertschinger had been arrested in his store at No. 52 Warren Street for selling firearms to Charles De Denetto and Joseph Bonventre, agents of Al Capone.

The following day the newspaper added “Dertschiner [sic], the police charged, was a source of supply for machine guns and ammunition, and Benedetto and Bonaventura had purchased weapons there.”  They guns were then shipped to Chicago where Scarface Capone was battling George (Bugs) Moran.

On December 5, 1938, when Alexander F. Bartley died in his home in Montclair, New Jersey, Bartley Brothers & Hall was still doing business from No. 52 Warren Street.   And so was, perhaps surprisingly, the Hudson Sporting Goods store, which was still operated by Cornelius Berchinger.

Berchinger was back in court on April 29, 1940 testifying in the trial of members of the Christian Front, a secret organization advocating the overthrow of the United States Government.  When arrested the alleged conspirators were in possession of firearms and “partly finished bombs.”  An invoice found in the home of one of the defendants recorded “the sale of ninety-four boxes of rifle ammunition for $67.01,” purchased at the Hudson Sporting Goods store.

Somewhat ironically, the store would appear in newspapers again two decades later—this time the victim of crime.   Three teenage gang members of the Phantons broke into the store on Friday evening, March 18, 1960.  They used crowbars to pry open a wooden shutter, then made off with an entire arsenal—20 revolvers and automatics, a rifle, two bayonets, and 3,000 rounds of ammunition.

The delinquents talked too much, however, and were overheard by a policeman discussing the heist in Colonial Park in Harlem.   When they saw Patrolman Paul Tekleis approaching, they fled, leaving five weapons behind.  The three boys were later apprehended and the firearms and ammunition recovered.  The oldest was 16 years old.

In July 1968 police killed a gunman who killed a young woman and injured two policemen and an elderly man in a Central Park shooting spree.    The .45-caliber revolved used in the crime was owned Bulgarian immigrant living in New Jersey on whose apartment walls were taped photos of Nazi leaders.

Investigation traced the gun to the Hudson Sporting Goods Company of No. 52 Warren Street. 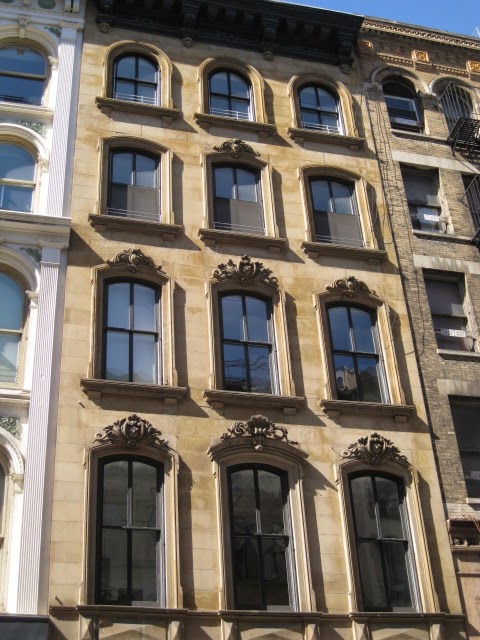 The days of harness brasses, radio tubes, and gangsters came to an end in 1981 when the building was converted to a block-through store at street level and apartments on the upper floors.   Both elevations appear much as they did when Bartley Brothers updated the storefronts in 1921.  And the superb carved ornaments over the upper openings survive—excellent examples of Victorian decorative taste in the years just before the Civil War.