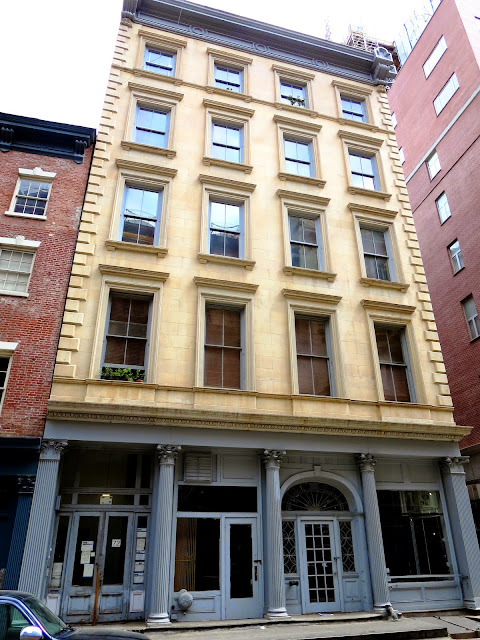 Born into one of New York's oldest families, Charles H. Contoit was considerably wealthy in his young adult years.  In 1860 the bachelor real estate operator began work on an ambitious project.  The block of Franklin Street between Broadway and Church Street on which he had set his sights had been purely residential three decades earlier.  But now the low brick homes were giving way to impressive commercial structures.  Contoit demolished the two buildings at Nos. 70 and 72 Franklin Street and began construction on a grand loft and store building.

While the plot sat nearly mid-block, the tiny alley called Franklin Place ran alongside it.  This block-long passage made the site all the more advantageous—providing for additional windows along the side and for delivery access off Franklin Street.   The name of Contoit’s architect has been sadly lost; for he deserves credit for the stately Italianate structure that was completed a year later.

Faced in white marble above the cast iron storefront, the building featured dignified carved lintels and sills.  A delicate marble egg and dart band ran along the top of the first floor entablature.  The crisp quoins that rose along the edges terminated below the cornice in handsome foliate carved scrolls.

The cast iron base with its elaborate fluted Corinthian columns and pilasters, like the marble façade above, wrapped around the Franklin Place corner.  The remainder of the Franklin Place elevation was faced in red brick, as was the rear—more in line with the industrial nature of the structure. 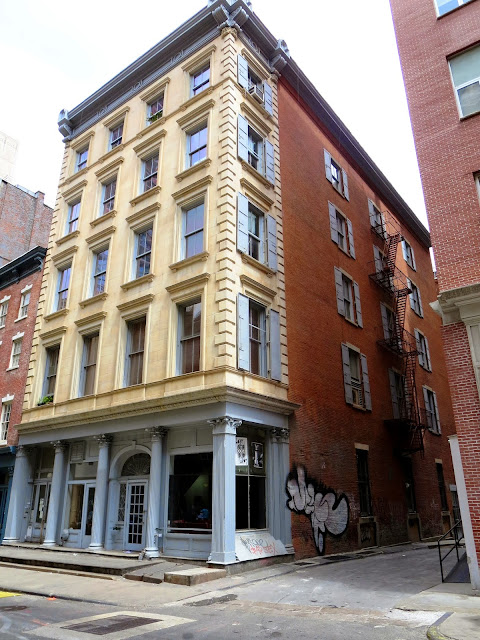 In 1861, the year that Contoit began leasing space in Nos. 70-72 Franklin Street, the first shot was fire in the Civil War.  Despite the upheaval and reduction in the male workforce caused by the conflict, dry goods firms moved in.  Among these was the store of George Pearce & Co., importers of “white goods, laces and embroideries, and linen handkerchiefs” both “British and Continental.”   The firm had been organized in 1858 and leased the ground floor here in 1860, prior to the building’s completion.

While the company sold its imported linens at street level, other white goods concerns had offices and factories upstairs.  On November 16, 1888 The Sun ran an advertisement that announced “Girls wanted to work on laces and embroideries.”  That same year John N. Bull’s “notions” company was in the building.

One tenant, dry goods merchant Roger Lamsen, ran into trouble on his way home on December 12, 1895.  On the same uptown elevated train with him was 65-year old retired merchant William Hickok.  The older man had been downtown on business and was heading home to No. 181 West 75th Street.  The Sun said of him, “He is not used to travelling on the elevated roads during rush hours, and he made up his mind that he didn’t like it.”

He did not like it because his train car became more and more crowded at each station and “the possibility of having to stand all the way up to Seventy-fifth street stared him in the face.”  By the time the train reached the 72nd Street station, Hickok was “in a very bad humor,” and was “what might be called ‘boiling mad.’”

Hickok bolted from the car just as Lamsen and another man, John H. Short, disembarked.  Although Lamsen and Short reached the stairway first, the crotchety Hickok tried to shove his way past them.  He “tried to force [Short] against the rail while he passed.”  When Short protested, Hickok “raised his foot and planted a kick which made Mr. Short grunt.”

When Hickok kicked him again and said “Now will you let me pass?” Short brought his embrella down on Hickok’s head.  It resulted in the 30-year old Short and the old man “mixing up with each other in a way which sent thrills of joy through the hearts of the guards of the train and the ticket men, who with about twenty passengers gathered about to see the fun.”

The trainmen, enthralled with the combat, made the passengers wait while the train stood still.

Then Lamsen, also 30-years old, got involved.  “Mr. Lamsen was foolish,” opined The Sun.  “By maintaining strict silence he would have escaped much physical exertion and much consequent embarrassment.”  But instead he poked his finger at Hickok and reprimanded him.  “You’re responsible for all this trouble, sir.  You’re dead in the wrong, and you’d ought to be ashamed of yourself.”

According to the newspaper “No one seems to know just how it happened, but in some manner Mr. Hickok broke away from the guard who was holding him, grappled with Mr. Lamsen, and was rolling wildly about the platform with him, all in the twinkling of an eye.”

It took a policeman to break up the fight.  Hickok’s face was bleeding and he insisted that Officer Beck arrest the two men.  He did.  When Lamsen and Short were arraigned in the Yorkville Police Court the following day, Hickok’s son stood in for him, telling the judge “his father was completely used up by the beating he had received, and would not be able to leave his bed until to-day.”

Also in the building and presumably less feisty were Chas. A. Brown & Co., commission importers of “English, French, German and Swiss underwear, hosiery and gloves;” and the Glastenbury Knitting Co., manufacturers of underwear.

On December 5, 1897 Charles H. Contoit died in his mansion at No. 728 Fifth Avenue.  The New York Times said his estate was “estimated to be worth considerably over $1,000,000.”  Lawyers could find no trace of any family of the unmarried man.  Almost all of his fortune was left to charity.   But first the 75-year old took care of his servants in his will.  Martha Finley, “an old servant of the family,” received $2,500 (about $75,000 today); his butler William Cribbens inherited $1,000; and “all the other servants get legacies of $250 each,” reported The Times.

Brothers Edward W. and George W. Scott ran the dry goods commission house of Scott & Co. in the building at the same time.  Edward was 70 years old in 1899 and, looking back with a modern view, seems to have been suffering from the first stages of dementia.  The condition resulted in a pitiable and potentially dangerous episode.

Edward Scott and his wife lived in the upscale San Remo Hotel.  Around 7:30 on Monday evening, November 6 he left the Franklin Street building and headed home.  He never arrived.

George Scott searched all the hospitals and ferries “in the belief that he had gone astray in a fit of mental aberration,” but no trace of the old man could be found.  Two days passed before, around 9:00 on the morning of November 8, George Scott's office telephone rang.  According to The Sun “a voice, which Mr. Scott recognized as his brother’s, at the other end of the wire, said: ‘I’m at the Fort Lee ferry.  Come and get me.’”

Scott took a friend, John P. Faure, to the Fort Lee ferry terminal on the Manhattan side of the river.  They could not find Edward.  When police had searched all the telephone booths in the area with no result, a detective took the ferry with the two men to the New Jersey side.  There they found Edward Scott sitting in the ferry house.

Saying he was “well known in the dry goods trade, having been in business here for more than forty years,” The Sun reported that “his mind is a blank as to his wanderings.”

He told his family that the last he remembered was riding on a crosstown car that Monday evening.  “The next thing he knew was that he was sitting in the ferryhouse at Fort Lee, and his eye had chanced to fall on a story in the paper he was reading about his own disappearance.”  At that point he realized he had been lost and called his brother.  The newspaper said “The explanation given of Mr. Scott’s disappearance was that he had become confused as to localities.”

Earlier that year Charles H. Contoit’s vast real estate holdings were auctioned—much of it in the neighborhood of No. 70-72 Franklin Street.  More than a dozen Manhattan buildings and real estate were sold.  In January 1899 The Evening Post Record of Real Estate Sales said the competition was “general and spirited” and that the sale realized $892,250.

Nos. 70-72 Franklin Street was purchased for $128,000 by James B. Haggin, referred to by The Times as “the Western millionaire;” along with several other properties.  (Haggin spent $531,000 at the auction.)  He had made his fortune in copper and was now making his mark in Manhattan real estate and society.  He became well known in horse racing circles, and establish himself and his wife in the former George Crocker mansion at No. 1 East 64th Street.

The building continued to attract white and knit goods firms.  By the turn of the century Kotedsilk Underwear Company had its New York office and salesroom here; as did Erlanger Underwear Manufacturing Co.  Erlanger scored a coup in August 1906 when it announced it was taking over the B.V.D. underwear operation.  “The company retains its selling offices at 70-72 Franklin Street,” noted Men’s Wear magazine.

James B. Haggin died in 1913; but his estate continued to operate the Franklin Street building.  In 1914 “the upper part” of the structure was leased to the American Cotton Mills, Co. which had been on Franklin Street for nearly half a century.  Two years later Stull, MacCallum, Wilcoxon & Co., dealers in white goods, took the corner store and basement.

The firm focused on the marketing of its Haze o’Dawn brand of voile; while offering “special bargains in colored wash goods, white goods and draperies to meet the demand of the season.”  Business was successful enough that on March 8, 1922 it was announced that the Stull, MacCallum, Wilcoxon Co. had taken the entire building “for a term of years.”

In 1928, just prior to the onset of the Great Depression, the architectural firm of Jardine, Hill & Murdock updated the nearly 70-year old building.  The upper floors, once mostly factory and office space, were now designated as “showrooms.”

Throughout the rest of the century No. 70-72 Franklin Street continued to house dry goods firms.  In 1931 Sichel Company, “linen fabrics,” moved in and in 1933 Brown & Kruger, Inc., linen importers, took the store and basement.  In the 1990s, the Manhattan Textile Corporation, import-export firm, filled the building.

By now the Tribeca neighborhood had been discovered and the grand Victorian structures were quickly becoming repurposed.  In November 2009, when the building was listed for $11 million, there were eight residential units in the upper floors and, as always, a store at sidewalk level. 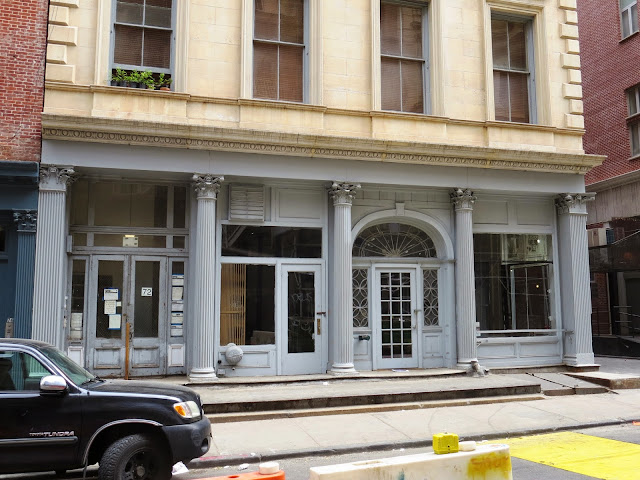 The white marble has been cleaned and restored and, somewhat surprisingly, the first floor storefront survives almost totally intact—including historic wooden double doors at the western end.  At some point a rather incongruous but highly attractive colonial entrance was inserted between the cast iron columns.

photographs by the author
Posted by Tom Miller at 5:53 AM