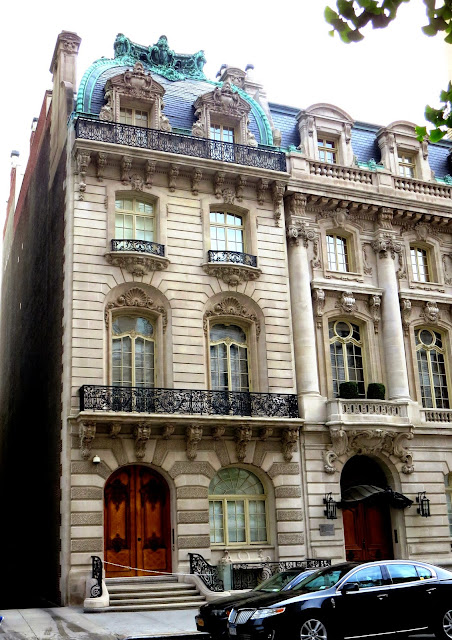 As the turn of the last century approached, Oliver Gould Jennings ranked among the wealthiest and most influential of Manhattan’s citizens.  His father, Oliver Burr Jennings, was a founder of the Standard Oil Company; and his own far-flung interests included directorships in Bethlehem Steel Corporation, McKesson and Robbins, Inc. the National Fuel Gas Company, the United States Industrial Alcohol Company, and several others.

Jennings married Mary Dows Brewster, the daughter of Benjamin and Elmina Brewster, on December 16, 1896.  Two years later, the millionaire laid plans for an impressive home for his bride.   For the site, he chose No. 7 East 72nd Street, where Caroline de Forest’s 28-foot wide brownstone home stood, just steps from Fifth Avenue and Central Park.  Next door at No. 9 the massive and elaborate Henry T. Sloane mansion had just been completed.

Architects Flagg & Chambers closely followed the lead of the Sloane mansion—matching the arched first floor openings and continuing the ebullient Beaux Arts motif.  The completed Jennings house appeared nearly as an extension of its neighbor.  Finally, on November 28, 1899, the New-York Tribune reported “Mr. and Mrs. Oliver Gould Jennings will this winter occupy their new home, No. 7 East Seventy-second st.”

As with all the grand city mansions, No. 7 was opened only during the winter season--about five months each year.  At other times millionaires occupied their country homes, high-end resorts, and, of course, traveled abroad.  On May 28, 1911 The Sun noted “Mr. and Mrs. Oliver G. Jennings of 7 East Seventy-second street, who are now at their country place at Fairfield, Conn., will go on to Newport in July.”

Oliver and Mary retained ownership of their elegant French home for 15 years.  In April 1914 Jennings purchased the vacant plot at No. 882 Fifth Avenue between 69th and 70th Street and sold the 72nd Street house.  The New York Times reported the buyer as “the Four West Fifty-seventh Street Company, controlled by W. Emlen Roosevelt.”  Jennings had put a $325,000 price tag on the house—about $7.8 million today.

One day later the title to the mansion was passed to Frank Schlitt, “whose name frequently appears as temporary possessor of valuable New York realty,” said The New York Times.   While the new Jennings mansion was being constructed, Oliver and Mary remained in the 72nd Street house.

On August 3, 1915 Jennings was being driven by his chauffeur near Harris Corners, around Westport, Connecticut.  On the same road was Simon J. von Der Lin, a waiter at the Hotel McAlpin.  Von Der Lin had taken his wife and 3-year old daughter for a country drive in a motorcycle with side car.  The meeting of the Jennings limousine and the open motorcycle would end badly.

Jenning’s chauffeur hogged the road and, according to von Der Lin, “forced the motor cycle so far to the side of the road that it collided with a telegraph pole.”  The toddler suffered a compound fracture of the knee, subsequent hemorrhages, and was partially paralyzed.  The waiter sued Jennings for $10,000 in damages in September.

On December 18 that year the Real Estate Record & Builders’ Guide noted that “Oliver Gould Jennings, 7 East 72d street, will soon be able to occupy the handsome dwelling being erected for him at 882 Fifth avenue.”   As Oliver and Mary Jennings moved out of the 72nd Street residence, Sumner Gerard and his wife, the former Helen Coster, moved in. 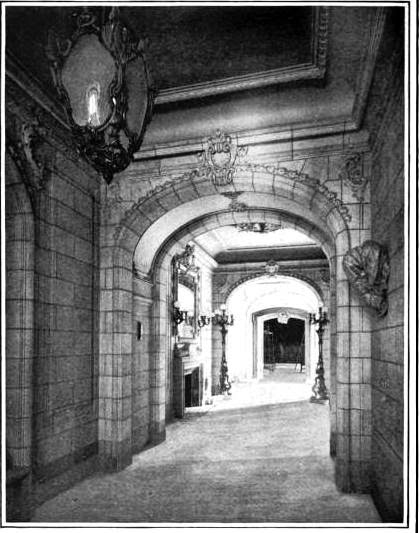 The couple’s first child, James Watson Gerard, had been born a year earlier and his brother, Sumner Gerard, Jr., would be born in the house on July 15, 1916.  Another son, Casper, would come along in March, 1919.

While the Gerards were socially visible, they took active parts in political and patriotic causes.  At the age of 46 in 1920 Sumner held the rank of major in the Army Reserve Corps.   Helen was a member of the Women’s Committee of One Hundred of the Serbian Child Welfare Association.  As the group pushed to collect funds for relief efforts, Helen Sumner was a major player.  On January 2, 1921 the New-York Tribune noted “The most ambitious affair will be a bridge to be held at the residence of Mrs. Sumner Gerard, 7 East Seventy-second Street, on Tuesday, January 11.”

A year later, on January 4, she invited 100 women into the house to discuss fund raising for the Woodrow Wilson Foundation.  The foundation was “organized to perpetuate the memory and ideals of the former President.”

Within four years the Gerards were gone from No. 7 East 72nd Street, replaced by the Henry Ingersoll Riker family.  A member of one of New York’s oldest families, Henry and his wife, the former Mary Jackson, had three children: John, Mary, and Henry, Jr.  Like Mary Jennings, one of Mary Riker’s favorite charities was the Babies’ Hospital and she routinely hosted meetings of the Sewing Circle of the Babies’ Hospital here.  Her husband, who had graduated from the Harvard Law School, never practiced.  The New York Times later mentioned “After a few years in Wall Street, he devoted himself to the management of his property.” 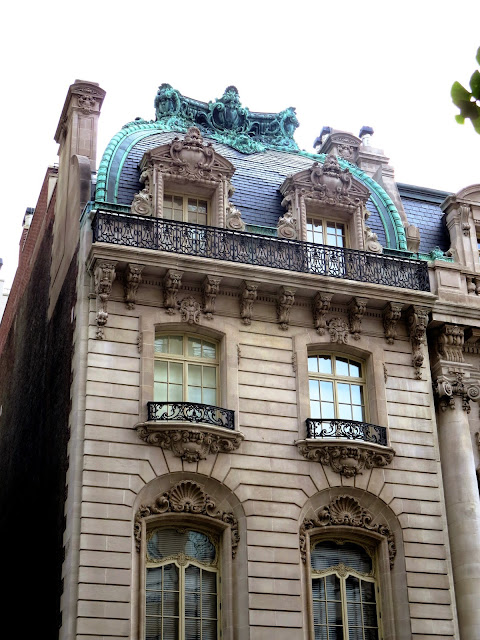 In November 1927 the 55-year old Henry Ingersoll Riker caught a cold, which quickly advanced to pneumonia.  After being sick only a few days, he died in the mansion on November 14.

One by one the Riker children would marry and leave East 72nd Street.   The first was Mary, who wed William Chandler Riker on April 26, 1930 in the Church of the Incarnation “with which for many years the Riker family has been associated,” said The New York Times.  The newspaper noted that the wedding was attended by “a representative gathering of old New York families.”

For readers who wondered about the Riker-Riker connection, The Times explained.  “The bride and bridegroom are distantly related and are descendants of Abraham Van Rycken who came from Amsterdam when New York was New Netherlands.”

The Riker sons both went on to become doctors.  John Lawrence Riker married Isadore Jean Beaudrias in 1932; and his brother married Cornelia Shepard on February 17, 1937.  Mary Jackson Riker now lived alone in the grand relic of the Gilded Age on a street much changed since the days when elegant carriages transported millionaires to and from their mansions.  She died in 1947.

At the time of Mary’s death, Frank Lloyd Wright was busy creating several designs for the Solomon R. Guggenheim art museum.   In February 1957 the Guggenheim opened in the Jennings mansion while its iconic building on Fifth Avenue was under construction.   It shared space with the Danish delegation to the United Nations.  The strange bedfellows would remain in the house until 1959, when the permanent Guggenheim museum opened.  The Danish group left within a few months.

In August 1960 the Lycee Francais de New York leased the mansion as additional facilities to its main school at Nos. 3-5 East 95th Street.  Four years later the school purchased the house along with the former Sloane mansion next door.  Walls were broken through combining the two buildings.

The school retained possession of the two magnificent structures until 2010 when it sold them as a package to the Emir of Qatar for $26 million.  He commissioned architect Thornton Tomasetti to blend them into a single massive residence the likes of which even the Sloanes and the Jennings would struggle to compete with.