The Sternberger House -- No. 837 Madison Avenue 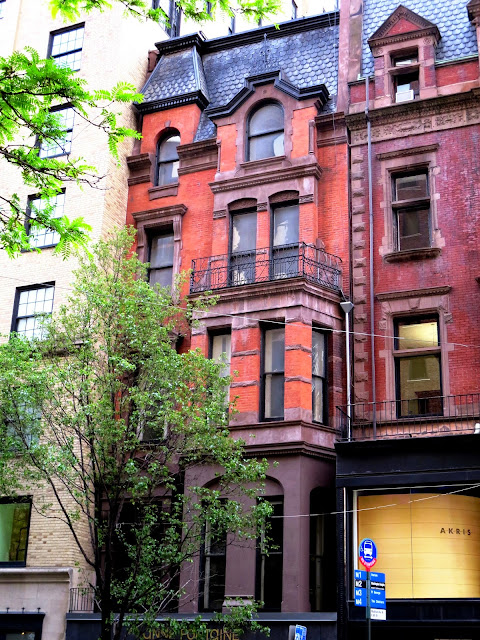 On April 24, 1884 John D. Crimmins sold Mayer Sternberger the lot at No. 837 Madison Avenue, between 69th and 70th Street.   The $24,000 price Sternberger paid for the plot (almost $600,000 today), reflected the upscale tone of the neighborhood.  The mansions appearing on Madison Avenue vied with those of Fifth Avenue, just a block away.

The wealthy merchant commissioned the firm of Thom & Wilson to design his new home.  The architects turned to the recently-popular Queen Anne style to produce a five-story confection.  The asymmetrical design—nearly required in the style—melded brick and stone in a feast of angles and shapes.  A generous bay culminated in a deep balcony; a slightly projecting bay above it morphed into a gable that thrust through the cornice into the fish-scaled mansard roof.  Thom & Wilson treated each set of openings differently.

As Sternberger’s house rose, department store owner Isaac Stern began construction of his mansion next door at No. 835.  Stern’s architect, William Schickel, created a harmonious Queen Anne structure.  But the completed Sternberger house would be more fanciful than its slightly wider neighbor.

Soon after the house was completed, Mayer Sternberger died.  His widow, Henrietta, sold it in 1886 to Georgiana E. Arnold.  The new owner, like Henrietta, was recently widowed.  Richard Arnold had died earlier that year.  A partner in the Arnold, Constable & Co. department store, he had amassed a large fortune.

Following Georgiana’s period of mourning she resumed living quietly in high style.  On March 19, 1892 she placed an advertisement in The Sun that read “Lady leaving for Europe desires situation for her coachman; can thoroughly recommend him both as coachman and useful man in house; sober, willing, and obliging.”

Like most socialites, she immersed herself in charitable causes as well.  She was a founder and continued supporter of the Babies’ Hospital on Lexington Avenue at 55th Street.

A devoted Episcopalian, Georgiana was a member of the fashionable Fifth Avenue St. Thomas’s Church.   When, in 1895, former pastor Frederick Courtney revisited New York from Canada with his wife and daughter they were her house guests.   It was somewhat of a social coup, at least among wealthy Episcopalians.  Courtney had risen to the rank of Lord Bishop of Nova Scotia.

On the afternoon of January 31 that year Georgiana Arnold gave a reception for the Courtneys.  “The Vassar Students’ Aid Society, of which Mrs. Arnold is an honorary member, was present in a body.  Many members of St. Thomas’s Church, of which the Bishop was at one time pastor, were also present,” reported The Sun.

Georgiana’s connection with the church was furthered when, in 1899, she married the Rev. C. Harvey Hartman, rector of St. John’s Episcopal Church in Dover, New Jersey.    Hartman’s church was 31 miles west of New York City, necessitating the couple’s dividing their time between the Madison Avenue house and Dover.

It was in New Jersey that Georgiana died on May 18, 1903.  Services for the wealthy and devout socialite would be complex.   A funeral was held in the Dover church on Wednesday, May 20.  The New-York Tribune reported “At the end of the services the body was taken to Mrs. Hartman’s home, No. 837 Madison-ave., this city.”  The following day another funeral service was held in the house at 1:00; then the body was removed to St. Thomas’s Church for a 2:00 service.

“A special train carried the body to Woodlawn,” reported the New-York Tribune.

A year and a day after Georgiana’s death, on Thursday May 19, 1904, the Madison Avenue mansion was sold at auction.  It was not until June 21 that the buyer, Allister Greene, was identified by newspapers.

If Greene lived in the house at all, it was not for long.  By 1907 No. 837 Madison Avenue was home to the family of the esteemed homeopathic physician Walter Gray Crump.  He was a member of New York University’s medical staff and First Vice President of the Obstetrical Society.  Both an obstetrician and a gynecologist, Crump’s medical papers were widely read.  He tested his theories in controlled clinical experiments and routinely announced his findings at medical conventions.

In 1907 the New York City sanitation workers went on strike.  New York City had recently prided itself on the cleanliness of its streets—a stark contrast to the conditions a few decades earlier.   Now citizens were faced with rotting garbage and stench.  The unpleasant situation turned fearful when Walter G. Crump added his opinion.

For years the theory that “foul air” contributed to disease held sway.  Now Crump saw dead dogs and cats in the gutters and was positive they had died from “the poisonous fumes from the decomposing garbage.”  He suggested that the sanitation workers did not realize the danger their strike presented, and that the normal citizen did not know the danger he was in.  He announced “no one can realize what a serious thing this is unless he understands the situation thoroughly from a medical point of view.”

By 1910 Crump was attending surgeon at six hospitals.  But his surgical career nearly came to an end in November that year.  He was operating on a charity case in Flower Hospital, removing an abdominal abscess.  During the procedure matter from the infected area splashed into his right eye.  “When Dr. Crump got home that evening he complained of extreme pain in the eye,” reported the New-York Tribune.

An eye specialist, Dr. Helen Cooley Palmer, and several nurses hurried to the Madison Avenue house.  For two weeks they remained there day and night, tending to the severe infection that threatened Crump’s sight.  A team of three other specialists consulted with Dr. Palmer.   Finally on November 17, 1910 the New-York Tribune reported “At his home last night it was said that while he was not altogether out of danger the attending physicians were hopeful of his ultimate recovery.”

While her husband continued his medical practice, Eudora Leighton Crump’s social life included membership in the Rubenstein Club.  Founded in 1887 by William Rogers Chapman, the club was a women’s choral group that met at the Waldorf-Astoria Hotel.  Their concerts there raised money for charitable causes.

One of these, in April 1917, was for the benefit of the New York Medical College and Hospital for Women.  Society pages reminded readers that “Tickets may be obtained from Mrs. W. Crump, 837 Madison avenue.”

In 1934 Albright College bestowed an honorary Doctor of Science degree on Crump.  But his interests and influence went well beyond medicine.  Crump was a trustee of Tuskegee Institute and Howard University and was active in the National Association for the Advancement of Colored People.

Eurodra L. Crump died in the house on October 12, 1936.  With his son, Dr. Walter Gray Crump Jr. living and practicing in Darien, Connecticut, Walter now lived on in the mansion alone with his domestic staff.

Nine years later, in March 1945 Dr. Crump, now 75-years old, became ill.  He was taken to Flower and Fifth Avenue Hospital where on May 1 he died.   By now the Madison Avenue neighborhood had radically changed.   The Stern mansion next door had sprouted a two-story storefront in 1921 and the houses to the north were replaced by a towering apartment building.

But Crump’s death was not the end of the road for the surviving Victorian rowhouse—at least not yet.  Walter Jr. maintained it as the family’s New York residence.  It was the scene on December 17, 1949 for a debutante dinner for daughter Constance Eudora Crump, who was studying at Smith College.

When Crump sold the house in April 1951 to real estate operator Frederick Brown, The New York Times noted “One of the last of the old brownstone residences along Madison Avenue between Forty-second and Seventy-second Streets still in the private-home category has just changed hands.”

No. 837 Madison Avenue would quickly fall out of the “private-home category.”  Brown resold the house a month later to attorney Irving Kirschenbaum, who sold it again in December to The 837 Madison Avenue Corporation.”  The syndicate announced its plans “to convert the structure into a store and small apartments” on December 21.

The stoop was removed and a storefront carved into the English basement level.  Amazingly, the entrance doors remained—normally converted to a window in similar renovations. Throughout the 20th century the ground floor shop saw a series of upscale home decorating stores. 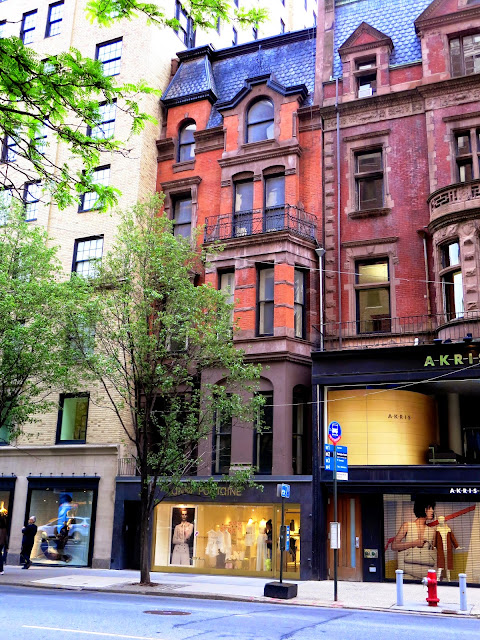