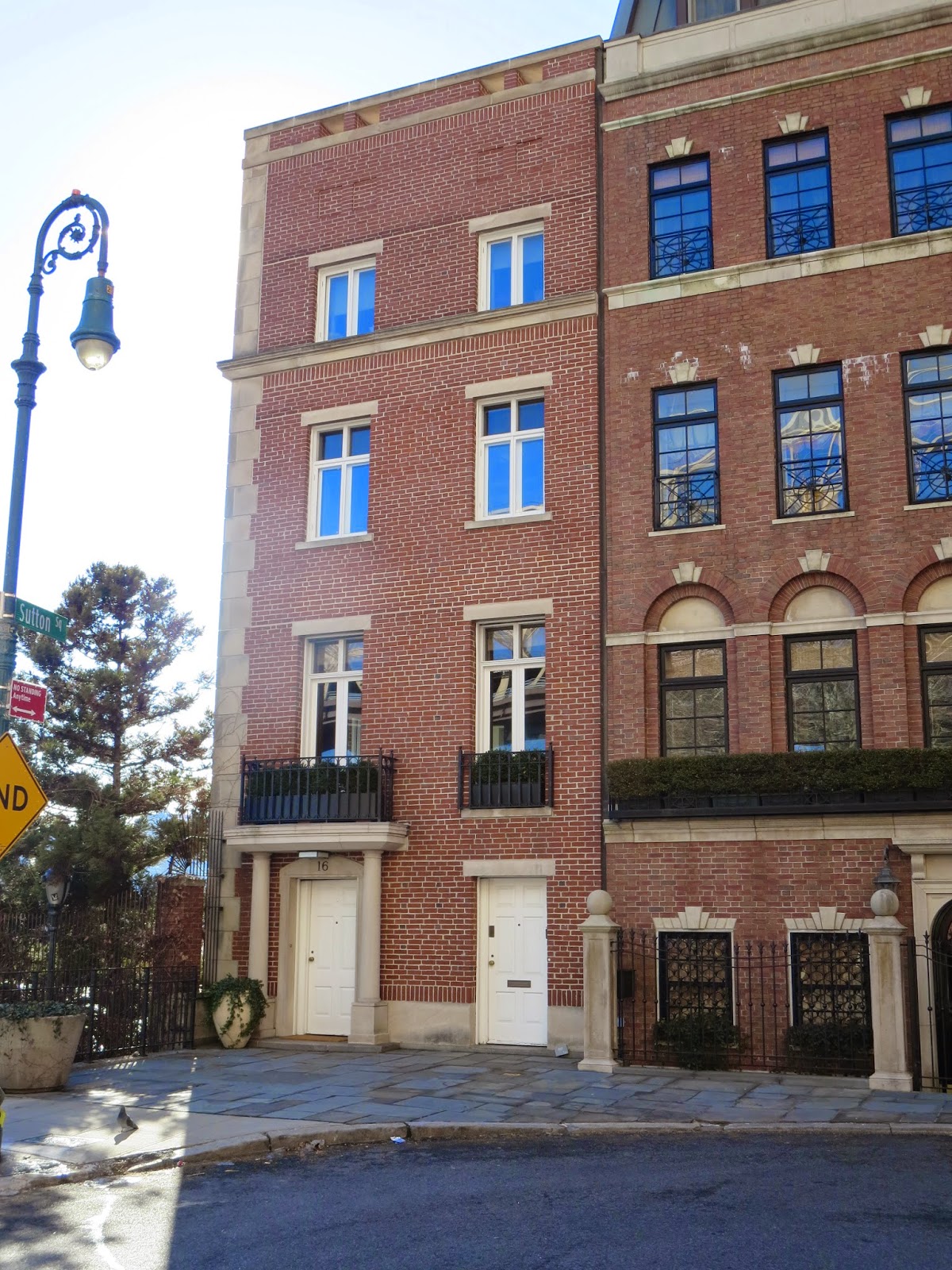 On December 21, 1896 The New York Times described the home of Aaron Goldsmith at No. 514 East 58th Street.  The house was “of brownstone, three stories high, with a basement.  One side of the house faced directly on the East River.  In the front of the house was a bay window looking toward Riverview Terrace, which extends from Fifty-eighth Street to Sixty-second, along the river bank.”

The quiet neighborhood above the East River cliff was still an upper middle-class enclave when The Times wrote its description.  Goldsmith was a partner with Elias Hartman in a liquor business at No. 45 Warren Street.   On the night of December 20, 1896, however, the little dead-end block was anything but quiet.

Sometime after 7:00 that evening a servant girl, Mary Roska, took the Goldsmith’s two daughters, 10-year old Bertha and 8-year old Hattie, upstairs to bed.   In the parlor were Goldsmith, 45 years old, his 33-year old wife Clotilda, and their 6-year old son, Frank.   A piano lamp—the Victorian version of a pole lamp—stood in the bay window, illuminating that section of the room.  The large lamp held more than a gallon of oil.

The Goldsmiths’s peaceful evening was shattered when suddenly the lamp exploded, throwing flaming oil throughout the parlor.  The New York Times related the following morning “A neighbor acquainted with the interior of the house said the fire must have caught the portieres between the parlor and the hall, and from there spread up stairs.”

Mary Roska had just tucked the little girls into bed and started for the stairs to get little Frank.  She was stopped at the top of the staircase by a wall of flame.  She ran to a rear window and jumped out, landing two stories below in the rear yard.  Mary reentered the house and ran through the basement and out onto 58th Street.

The fire fighters of Truck No. 2 were on the scene within ten minutes; but it was too late.   “Before the fire had been extinguished the interior of the house was burned away,” said The Times.  “Only the walls and the first floor remained.”

The three bodies on the first floor were burned beyond recognition.  “Mr. Goldsmith was recognized by a diamond pin that he had worn in his shirtfront and which was still on his body.”  The newspaper said “Up stairs on the next floor were found the bodies of the two little girls.  They had evidently been undressed and in bed.”

The middle-class character of the block was evidenced by the $5,000 damages to the Goldsmith home caused by the blaze—about $145,000 today.

But by the end of World War I much had changed.   A brewery operated nearby and the former private homes were operated as rooming houses.  The New York Times unapologetically called the district “a slum.”

It was exactly the type of neighborhood where one would not expect to find a millionaire.  But far from Fifth or Madison Avenue, it had potential only a few far-sighted pioneers could envision.  The river views and cooling breezes enjoyed by the Goldsmiths were still enticing—if only enough investors could be found to transform the area.

What was, in 1896, was a handsome private home was now described by the Real Estate Record and Builders’ Guide as a “3-story stone tenement.”  The day after the announcement in The Times, Rosecrans transferred the title to his wife, Helen; as was common.  The couple’s mortgage was $20,000.

The Rosecrans house would be transformed according to common restrictions.  “The brownstone stoops, the window ledges and other protrusions are to be cleaved off, leaving a straight front to the outside world.  Architecturally the façade will be of the American basement style, which has been popular in the Fifth Avenue district for the last decade."

The resultant home, designed by Mott Schmidt, could be diplomatically termed “understated” and, at worst, “uninteresting.”  Four stories of red brick were highlighted only by two thin stone bandcourses and a pedimented centered doorway.   While the neo-Georgian homes Schmidt designed for Anne Morgan and Anne Vanderbilt would soon steal the show on Sutton Place, the exterior of the Baldwin house drew little attention.

In March 1922 Helen Baldwin and the City of New York met in court to decide who owned the cliff face that cascaded down to the river.  The court’s decision that it was Baldwin property would be a fateful one for the house two decades later.

In 1931 Lillie H. Havemeyer, purchased what was now No. 16 Sutton Square.  Her choice made sense since her two sisters, Anne Vanderbilt (widow of William K. Vanderbilt) and Mrs. Stephen Olin already owned homes on Sutton Place.   Her mortgage of $51,000 reflected the increased property values.

Lillie Havemeyer filled the house with period antiques and works of art.  If the façade of the Havemeyer home was blasé, the interiors made up for it.  Dry Goods Economist said of her “Mrs. Havemeyer, who was Miss Lillie Harriman, is a sister of Mrs. William K. Vanderbilt.  She is almost as well known as a connoisseur and a woman of taste as she is a leader of fashion.” 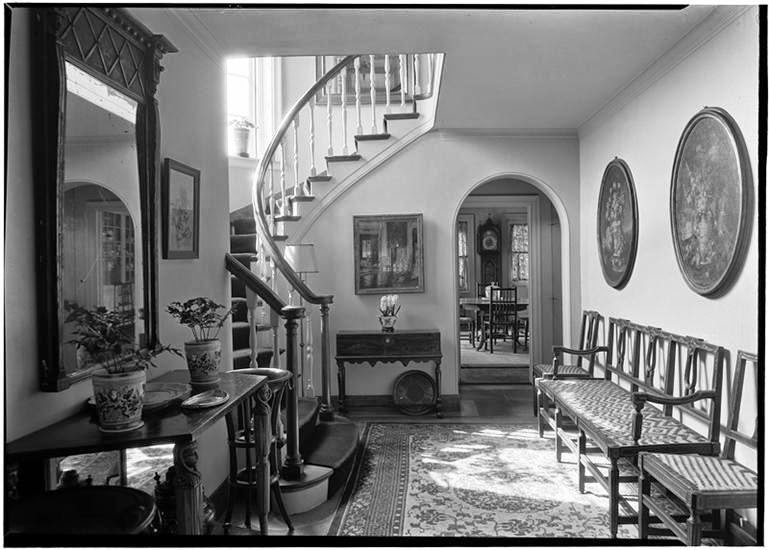 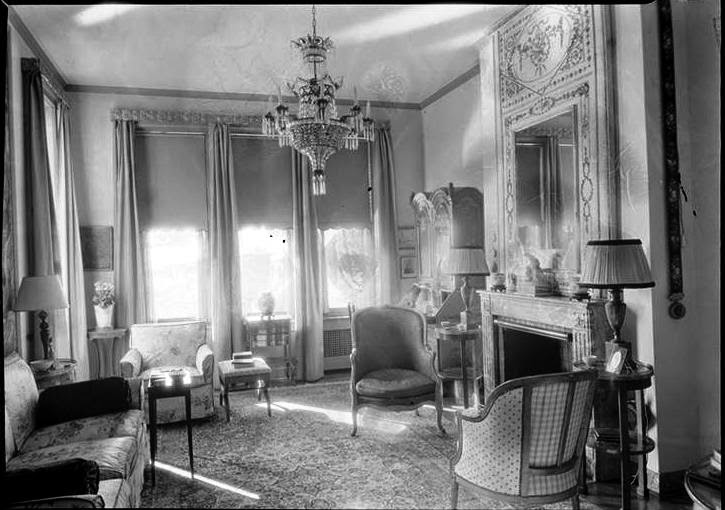 Among Lillie’s close companions was S. Ogden Ludlow, known familiarly as “Luddy,” the estranged husband of Katherine Hepburn.  According to biographer William J. Mann in his Kate: The Woman Who Was Hepburn, “Havemeyer, a well-traveled gadabout in her fifties, preferred cultured young homosexual men as her escorts and Luddy, [Michael] Pearlman said, ‘fit that bill quite well.’”


In 1939 construction began on the massive FDR Drive project below the cliffs of Sutton Place.  Actress Marion Hopkins, who lived at No. 13 Sutton Place, told a reporter on October 15, 1939 “There was a nefarious plan afoot to have the highway run parallel to our lawns.  But those of us who own houses in Sutton Place got together and paid to have the road covered over with grass.”

The revised plans preserved the exclusivity of the enclave and the river views; but required dynamiting the solid stone cliff.  Most of the homes sat far back from the cliff’s edge.   But that was not the case with No. 16 Sutton Square.

The Commissioner of Borough Works, Walter Binger, sat with Lillie Havemeyer and they came to an agreement.  The old house would be demolished and a new one constructed.    On May 21, 1940 it was announced that architect Dewitt C. Pond had filed plans for a four-story home costing $30,000; about half a million in today’s dollars.

Pond’s design blended with the neighboring neo-colonial facades.  A simple columned portico identified the main entrance and limestone quoins and lintels provided contrast with the red brick.  Across the street, at No. 7 Sutton Square, a son was born to Aristotle Onassis and his wife, the former Athina Livanos, on May 5, 1948.

By the time their second child, Christina, was born on December 12 two years later, the Onassis family was living in No. 16 Sutton Square.   The New York Times described it as “furnished in the Louis XVI period.”

The shipping tycoon had amassed the largest private fleet in the world and his wealth was nearly unequaled.   His first years at No. 16 Sutton Place saw him entangled in court battles over his questionable whaling operations off the coast of Peru.

He was distracted from legal troubles in 1954 when his yacht, the Christina, was launched.   In 1948 he had purchased a Canadian naval frigate, the Stormont, for $34,000.  Now it emerged as the most lavish private yacht in the world—having cost Onasssis more than $4 million.  It was outfitted with a formal library, a staircase with a marble handrail and one fireplace faced in lapis lazuli.   The Onassis suite had four bedrooms and a bath of blue Sienna marble.  There were nine other suites for guests—people as dissimilar as Winston Churchilll, Greta Garbo, John Wayne, John Paul Getty, Jacqueline Kennedy and Richard Burton.  The floor of the mosaic-tiled swimming pool could be raised to deck level, creating a dance floor.

The yacht would eventually end the Onassis marriage.  It was on board the Christina that Onassis began his affair with opera star Maria Callas.   When Athinia (known as Tina) discovered the indiscretion in 1960, she sued for divorce. 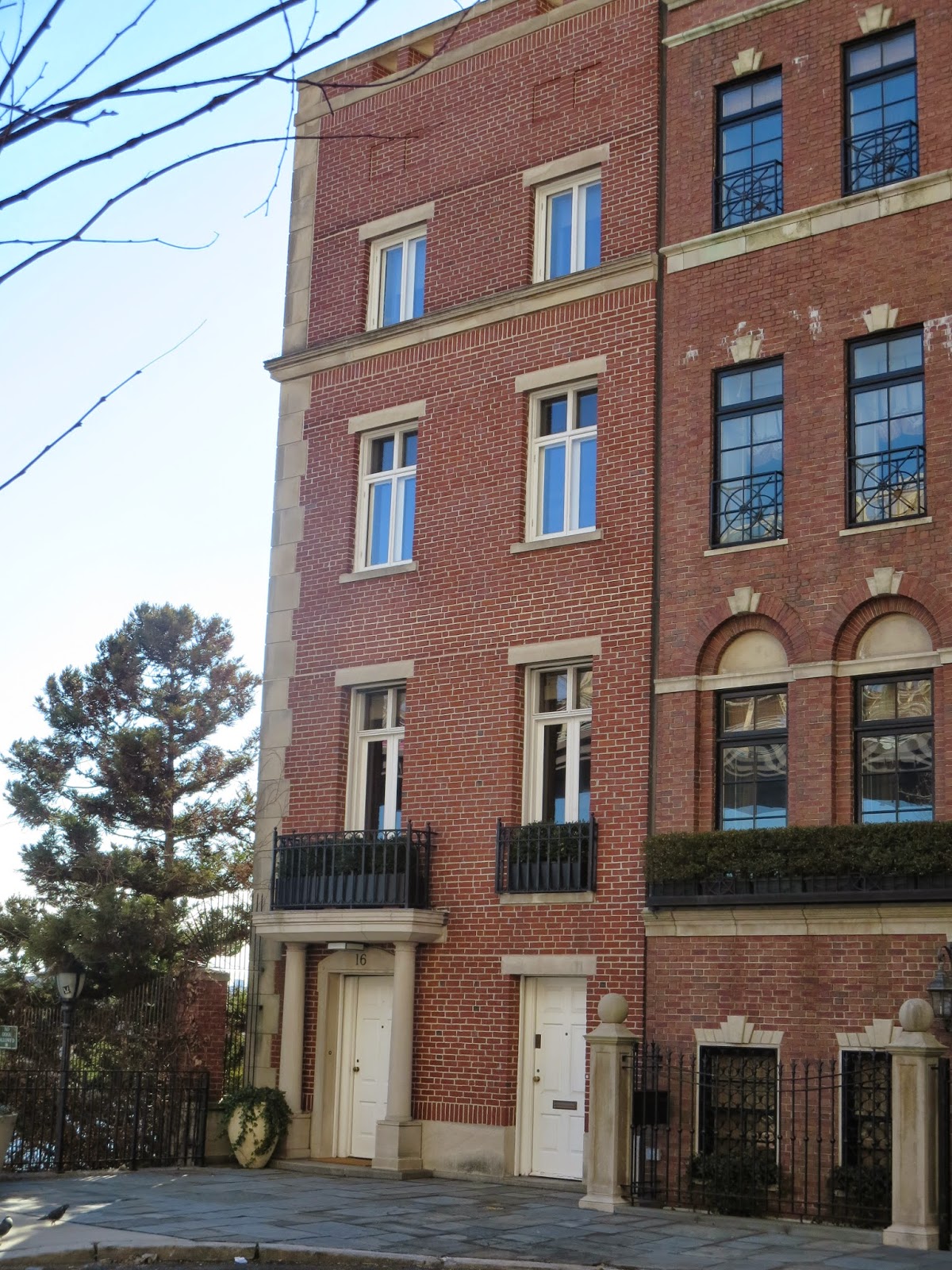 Little about No. 16 Sutton Square has changed.  In 1989 it sold for $8.325 million.   It continues to demand little outward attention, preferring as always to reserve its true character to the inside.

uncredited photographs taken by the author
Posted by Tom Miller at 2:46 AM