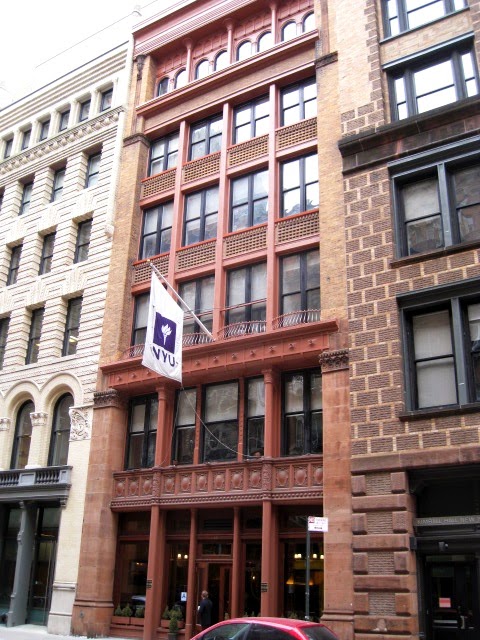 A single block of Waverley Place, near Washington Square kept architect Alfred Zucker busy in the first years of the 1890s.   Within a two year period between 1891 and 1893 he would design Nos. 12, 18, 24-26, and 28-30 Waverley Place, and the massive stone structure at the corner of Waverley Place and Greene Street, No. 246 Greene.  Elegant brick-faced residences, once the homes of some of New York’s most influential citizens, were being razed at a dizzying pace to be replaced by his modern commercial structures.

Wealthy merchant John Dowley owned one such house, No. 18, in the decades before the Civil War.   Four stories tall and 33-feet wide, it was an impressive residence.  Following Dowley, it became home to Joel Browne Post and his wife, the former Abby Mauran Church.  Here their son, George Browne Post grew up to become one of America’s premier architects.  But by 1891 Post’s boyhood neighborhood was doomed.

On February 7, 1891 the Real Estate Record and Builders’ Guide reported that Post had sold the house.  “It is understood that the purchaser will tear down the house and erect a warehouse on the site.”  The purchasers were brothers Samuel and Henry Corn, who were grabbing up several other properties on the block.  Their architect of choice was Alfred Zucker and it was this relationship that resulted in Zucker’s unusual string of commissions on the street.

A month later the Record and Guide reported that Zucker had filed plans for “a six-story basement and sub-cellar warehouse.”  The paper noted “This building will be of brick, iron and stone construction, furnished with all modern conveniences and is estimated to cost $75,000.”  That figure would translate to just under $2 million today.  Interestingly, when the Corns took out their $75,000 mortgage from the Title Guarantee Trust Co. in September that year, the paperwork included “and wives.”

George Post’s home was demolished, construction begun, and the building completed within a year.  Zucker managed to produce a Romanesque-inspired design without the use of arched openings—other than those at the sixth floor, where paired windows formed a near arcade behind thin columns with fanned capitals.  Two story stone piers with carved medieval capitals continued upward as brick.  The central section was, for the most part, cast iron; allowing for vast expanses of glass.  The spandrels at the fourth and fifth floors were filled with creatively-laid brick, creating waffle-like panels. 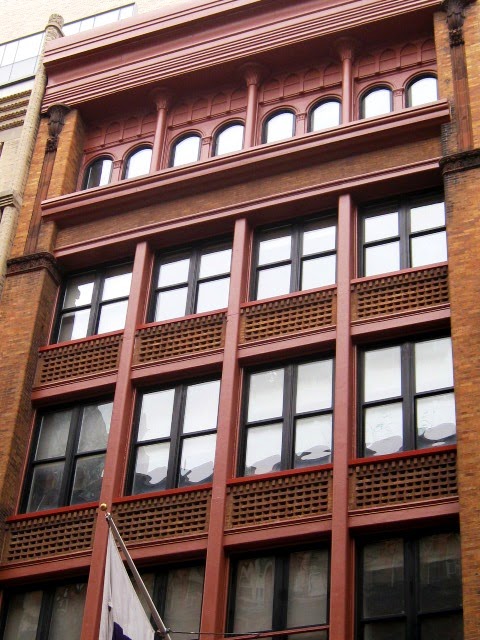 The rapid redevelopment of the neighborhood was due, in part, by the encroachment of the millinery and garment districts.    The ground floor retail space became home to the “hats and caps” store of Crofut & White before long.  The Clothiers’ and Haberdashers’ Weekly reported on December 27, 1895 that Crofut & White "will shortly move their New York office from 24 West Fourth street into the store at 18 Waverly Place."

The Empire Cloak and Suit Company moved its manufacturing operation into the building.  Abraham Moses worked here in 1897 as a cloth cutter.  Moses commuted daily from Newark, New Jersey; but his daily routine would end suddenly and tragically on September 11 that year.

That day the cutting crew was running low on material and Abraham Moses went to the elevator, leaned into the open shaft and yelled down for the operator to bring up more cloth.  The New York Times reported the following day “The elevator was coming down with a load of freight and it struck Moses on the back of the head, breaking his spine and inflicting injuries from which he died two hours later in St Vincent’s Hospital.”

At the time of the accident, the labor movement was taking root in the United States.  It would bring the Empire Cloak and Suit Company to a halt three years later.  In 1899 about 200 of Empire’s employees joined the Cloakmakers’ Union.   Not only did the owners, brothers M. and J. Silverman, refuse to recognize the union; they adamantly refused to hire new union workers.

When the unionized workers arrived at No. 18 Waverley Place on January 10, 1900 they found themselves locked out.  Now officially on strike, they told reporters two days later that they “still remain firm and declare that they will not acceded to the demands of M. and J. Silverman.”

Hat manufacturer Lanchick Bros. were not immune to labor problems, either.  In 1905 its employees, members of the cap makers’ union, went on strike.

Among the other millinery and clothing firms in the building were Van Orden & Bickner, wholesale hat dealers in 1907; The Queen Waist Company in 1908 and the Fiberloid Company in 1909.  Fiberloid produced men’s collars and cuffs, and aggressively marketed its Litholin brand.  Made of waterproofed linen, it was guaranteed to “hold its shape, cleanliness, neatness, and has the regulation dull white surface of ordinary, well-laundered linen…if the sun shines or the rain pours.”

Scandal visited No. 18 in 1912 when burglars broke into a garment manufacturer.   The owner was disgraced with his son, Bernard Levy, was arrested for the crime.   After working to clear his son of the charges, the owner committed suicide. 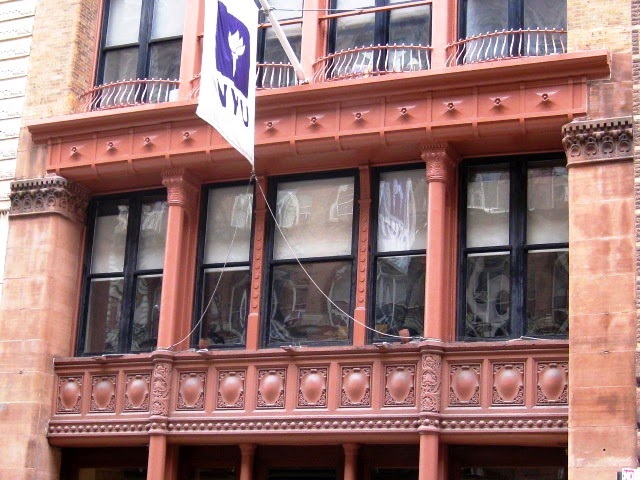 On May 8 that year Jane Holt of The New York Times wrote “The appetizing aroma of chocolate that is being melted pervades the factory of the Kopper Company at 18 Waverly Place, where candies in the European style are manufactured for sale in retail stores in many sections of the country.  The confections…are of twenty varieties that the firm used to make in Germany before its establishment in this country in 1938.”


The “appetizing aroma of chocolate” would waft out of No. 18 Waverly Place for more than four decades.  Kopper’s Chocolate factory left the building in 1986.   The building was acquired by New York University, which initiated a restoration and renovation in 2008.  Today it remains a handsome element in Alfred Zucker’s eclectic string of 1890s structures.