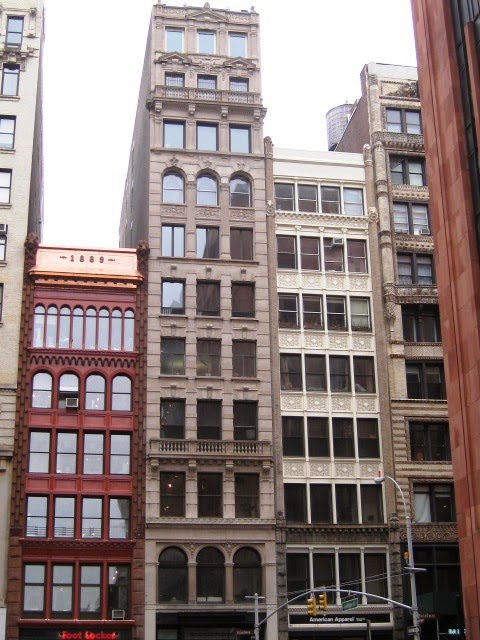 In 1893 Myer Finn’s old four-story brick building at No. 714 Broadway was flanked by modern loft-and-store buildings.  No. 712 was completed that year and doubled No. 714 in height.   On the northern side, No. 716 had been completed two years earlier—a fantastic six-story beauty designed by Alfred Zucker with terrifying gargoyles staring down at Broadway.

Finn (whose first name sometimes appeared as Meyer) took advantage of the commercial building boom along this section of Broadway and offered No. 714 for sale.  His buyers, however, would be surprising.  Trans-Atlantic negotiations were carried on via cable and on February 13, 1893 the Real Estate Record and Builders’ Guide reported that Finn had sold the old building “to C. Hermann, of Frankfort-on-the-Main, Germany, and Dr. Heinemann for $125,000.”  The German investors paid the equivalent of about $3.4 million in today’s dollars.

Hermann and Heinemann would soon transfer title to German-born developers Emanuel Stern and David Schwartz.  In 1895 the pair commissioned the firm of Buchman & Deisler to design a skyscraper on the site.   The well-rounded architects were responsible for both residential and commercial architecture.  In 1893 they had completed a large addition to the Bloomingdale Department Store on 59th Street; in 1896 they would finish the Alexander Building for shoe merchant Andrew Alexander along the Ladies’ Mile; and the following year they would start work on their masterful Art Nouveau New Era Building at No. 495 Broadway.

In January 1896 Buchman & Deisler filed plans for “an eleven-story brick and stone store.”  The cost to the owners was estimated at $140,000--$4 million for the building alone by today’s standards, not counting the cost of the real estate.

Completed in 1897, the neo-Classical structure rose head and shoulders above its two neighbors.  Clad in limestone, its dignified ornamentation was, for the most part, restrained.  Two building-width balconies, at the fourth and tenth floors, relieved the verticality of the design.  The cast iron shop window at street level projected slightly beyond the façade.  Expanses of glass on the upper floors were made possible by the steel and cast iron frame. 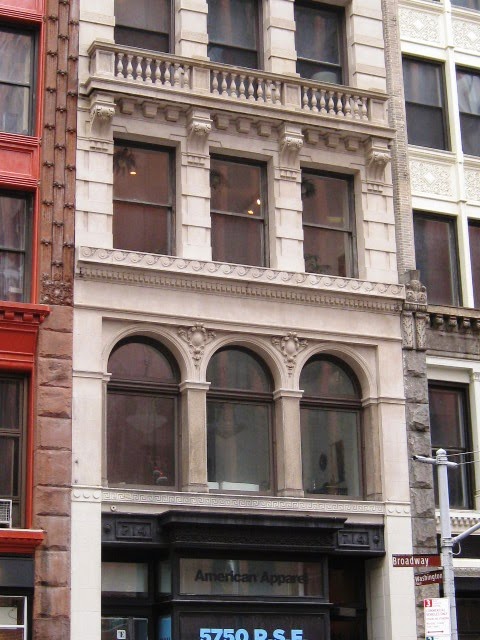 The building was open only a few months when it became part of a puzzling mystery.  On August 2, 1897 a man took the ferry to New Jersey and, at 3:00 in the afternoon, stood at the corner of Monroe Street in Passaic and shot himself with a 38-calibre revolver. The New York Times reported “The bullet entered over the heart.  The cause is said to have been despondency.  He came to Passaic on purpose to commit suicide.  He will die.”

The dead man was identified initially as “J. L. Jacobi of 351 West Fifty-eighth Street, New York, a dealer in cloaks at 714 Broadway.”   The 58th Street address was the St. Albans residence hotel; but investigation showed that neither the New York City Directory nor the New York Business Directory listed anyone named Jacobi.  And inquiries at No. 714 Broadway revealed no one by that name doing business there.

The connection to the hotel was a possible lead.  A reported asked around and found that “a Mr. Jacobi has rooms for himself, wife and three children.  The family took possession of their rooms a week ago.  They came from the South.”  The clerk was unaware of Jacobi’s initials and refused to allow the reporter to give his card to the elevator man to take to Mrs. Jacobi.

Small manufacturers, mostly apparel firms, filled the building—like Gumbiner & Fox and Mark H. Cohen & Brother who were tenants in 1899.  In April that year it was nearly sold to a rather surprising buyer—Meyer Finn and his partner, M. Kahn.   According to the Register and Guide Finn regained his old property by paying a bargain-basement price of about $100,000—about 70 percent of the construction cost.

But he and Kahn rapidly resold to operators Stern & Schwartz.  It was no doubt a profitable transaction. When the new owners sold No. 714 in January 1901, the New-York Tribune reported the purchase price at “about $285,000” and was called “the largest real estate deal made in the Broadway wholesale district for some time.”

Mack, Latz & Co. was in the building that year.  The manufacturers of children's apparel loaded nine cases of clothing onto the wagon of expressman Herman W. Brand on Friday, March 22, 1901.  Brand made a subsequent  stop on West 3rd Street to make another pick up and when he came out “his horse and wagon and goods had disappeared,” according to a police report.

The Mack, Latz & Co. goods were valued at about $1,200.  Within two hours police found the empty wagon and horse at South and Clinton Streets.   The heist was the work of what police termed “a bold gang of wagon thieves who have been operating with single success in the clothing district for several weeks.”

The crooks would not be free for long, however.  The following afternoon Detective Sergeants Foye, Clarke and Becker broke into the apartment of Jacob Kutner and his 24-year old wife, Mary at No. 411 Sixth Avenue.

Inside were the Kutners, 23-year old Edward Raymond “who described himself as a ‘vocalist,’” and 41-year old peddler Louis Greenberg.  The New York Times reported “When the police broke in Greenberg was bargaining with the others for the plunder, which was scattered all over the place” and said “all found in the place were arrested.”

Edward Raymond was, in fact, not a vocalist, but a gangster with the alias of “Abe” Randsky.  When he felt he was being set up by his confederates to take the rap, he talked to the police regarding a plea deal.    The Times said “He did this despite the treat made to him by his associates that if he turned State’s evidence he would not live long after to gloat over the others’ discomfiture.”

On May 16 he testified before Judge Foster in General Sessions and explained that he “Blowed on me pals, who done me dirt.”  Raymond told the court that the gang had a large “fence” on the East Side who would take the loot.  “the goods were shipped immediately to other cities,” wrote The Times. 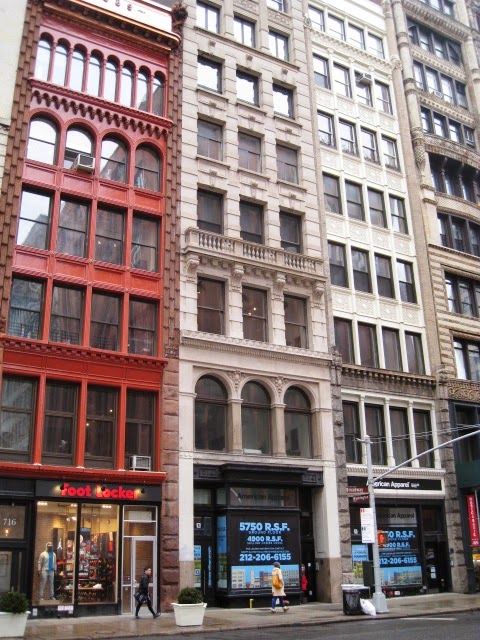 When the Monarch Suspender Company took four floors of the building in 1902, it agreed to a rental of $7,500 a year.   Hat makers were also leasing space here, like The Crescent, “makers of trimmed and ready-to-wear hats” and Lamer & Lewy, “manufacturers of bonnet and hat frames” which were here in 1904.  Suit and coat makers Per, Mamolen & Locks, Co. who leased the 5th floor, had a close call that same year.

On November 21 Policeman Campbell was standing near No. 714 Broadway when a canvas-covered wagon drew up at the curb.  The driver noticed the officer and drove on.  According to The Sun the following day, “Campbell thought that was queer and shadowed the wagon.  It drove around a lot of corners, and finally to 714 Broadway again, where it backed up to the curb.”

As Officer Campbell watched from the shadows, two men came out of the building carrying armfuls of fabric.  He waited until 15 rolls had been loaded onto the wagon before descending on the driver and one of the thieves.  “The other got away.”

Police found the steel latticed door leading to the fifth floor broken open and the wooden door behind smashed.  “Piled up in the hallway were thirty-seven rolls of cloth, 150 overcoats and 100 suits of clothing,” reported The Sun.  “Desks and drawers in the place had been broken open and rifled.  The cloth found in the wagon was said to be worth $75 a roll.”

The crook caught removing the fabric from the building was identified as Henry Goldberg.  His interest in the caper was understandable   He was a tailor.

Surprisingly, along with the apparel firms (there were at least nine different garment companies in the building in 1914) real estate companies shared space here.  S. P. Prager; the Simon Berg Realty Co. and Leopold Sinsheimer (he owned the building) ran their real estate operations here in 1914.

As the garment district moved north of 34th Street during the Depression years, No. 714 retained its hat and clothing tenants.  In 1936 and ’37 the list included the Everlast Underwear Co.; Stein Cap Co.; Edward Wechsler, “ladies’ blouses;” and the Kessler Clothing and Hat Co. along with about seven other garment firms.

But not everyone in the building was busy making clothes.  In March 1939 the principals of Wald Merchandise Company, Inc. were arrested on suspicion of manufacturing denatured bootleg alcohol. 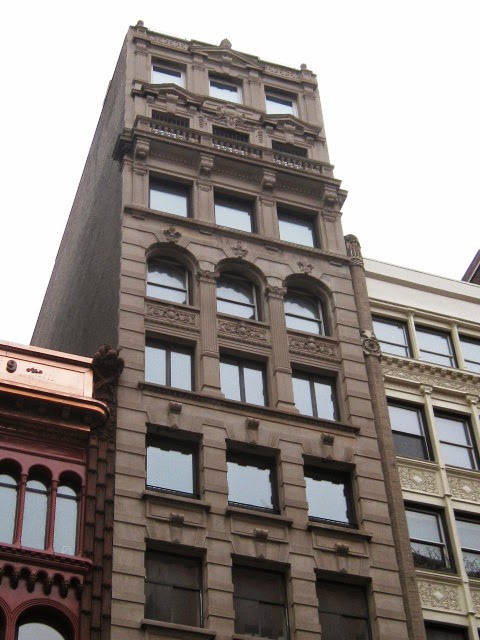 The 1940s saw the first real change in the type of businesses renting space here.  Although in 1941 firms like Morris Chesner, “ladies’ hats,” the G. S. Sportswear Co. and the Glasgow Hosiery Corp. were still in the building, they were the last holdouts of the former garment center.  In 1943 the street-level store where once ribbons and trimmings were sold was leased to Grand Union Equipment Co. which sold “general merchandise.”

As the Noho and Soho neighborhoods were rediscovered by artists in the last quarter of the 20th century, they were refurbished.  The spacious lofts where Edwardian women once toiled over sewing machines, with their vast windows, were perfect for artists living and working spaces. 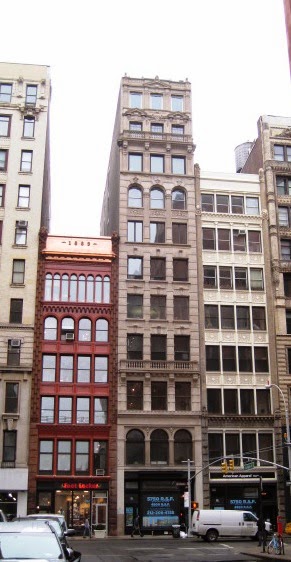 In 1982 No. 714 was joined internally with No. 716 Broadway and the upper floors were renovated into “Joint living/work quarters for artists.”  That too would change.  Once the home of struggling artists, 3-bedroom apartments in the building now have a starting price of around $5 million.