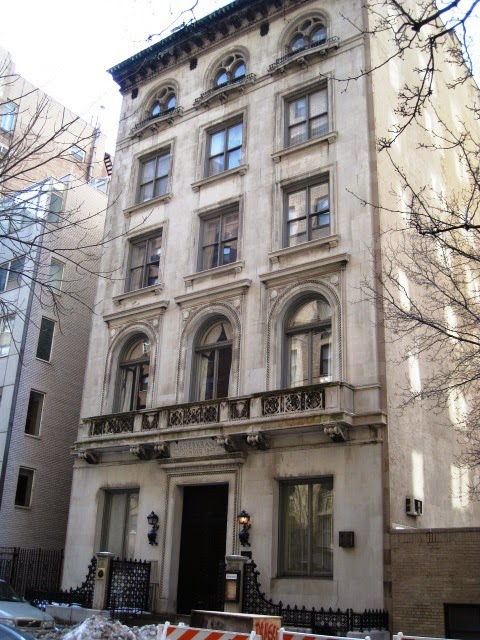 In 1901 Henry Phipps purchased two five-story flats at Nos. 7 and 9 East 87th Street, paying $100,000 for the properties.  His purpose, no doubt, was to do away with the bothersome buildings that abutted his rising white marble mansion at the corner northeast corner of Fifth Avenue and 87th Street.

A year later Phipps commissioned architect Grosvenor Atterbury to design a grand home directly opposite the site, at No. 6 East 87th Street.  The generous plot, just under 77 feet wide, provided Atterbury the luxury of including a narrow garden to the side.  This did away with the necessity of a separate service entrance at the front of the house and also provided additional windows.

The five-story mansion, completed in 1904, was faced in limestone.  The New York Times deemed it “one of the largest and finest homes in the upper Fifth Avenue district.”  Its Beaux Arts design included grand arched French windows at the second floor that opened onto a long stone balcony.  Exquisite ironwork that matched the entrance grillwork decorated more than protected the areaway.

Atterbury’s plans were inscribed “house for J. S. Phipps, Esq.;” but John Schaffer Phipps’ parents, Henry and Anne Childs Shaffer Phipps, moved in as well—assumedly awaiting the completion of their mansion across the street.  John had married Margarita Celia Grace a few months earlier, on November 4, 1903.  The newlyweds would summer in their massive Westbury, Long Island estate; and temporarily share the 87th Street house with the extended Phipps family.

The entire Henry Phipps family had recently relocated from Pittsburgh.  The original partner of Andrew Carnegie, Phipps retired in 1903 with what was estimated to be a fortune of $10 million.

John's new house was, fortunately, commodious.  Also in the mansion were his sister Helen and her banker husband Bradley Martin; sister Amy; and his mother's brother, Robert Shaffer, who was also an associate of Carnegie.  The New York Times would later mention that Shaffer “lived with his nephew either at the home in East Eighty-seventh Street or at Westbury.”

In May 1905 Amy sent out wedding invitations.  The Pittsburgh Press noted “The bride-elect has departed from the customs which obtained at the time of the weddings of her sister, Miss Helen Phipps, and her brother, John S. Phipps, and has had her wedding and reception cards prepared in America and issued from her New York home.”

The invitations to the wedding, to be held on June 28 in St. George’s Church, included tickets to be presented at the door.  It was a means to keep gawkers and riff-raff on the sidewalk and out of the church.   Amy’s was a socially-enviable match.  The groom-to-be, Frederick Edward Guest, was, as reported in The Pittsburgh Press, the “son of Baron and Baroness Wimborne and is a cousin to the Duke of Marlborough, who married Miss Consuelo Vanderbilt.  He is also a relative of the Duke of Roxbrughe, who married Miss Goelet.”  The marriage put the wealthy girl from Pittsburgh on a social par with any of New York’s debutantes.

On July 12, 1906 John and Margarita were in Newport when Robert Shaffer left the Westbury mansion for New York.  Around 10 a.m. his chauffeur, Andrew Peters, approached the Long Island Railroad tracks.  Later that morning The Times would report that he was “unconscious of the approach of the express train at the rate of forty-five miles an hour.”

Shaffer’s limousine collided with the passenger train.  “The machine was demolished, and Mr. Shaffer was hurled fifty feet, landing upon a pile of railroad ties.  An examination showed that almost every bone in his body was broken.”  The 55-year old bachelor was killed instantly.

By now Henry and Anne Phipps were living in the massive Fifth Avenue mansion at the corner.  A few months before the train accident John and his wife left the 87th Street house as well.  John’s sister Helen and her husband leased the 87th Street mansion and, according to the New-York Tribune on February 27, “will make their home there for some time to come.”

When Amy visited from England in 1912, Helen hosted a lavish party.  On March 10 The Sun reported that “Mrs. Bradley Martin, Jr., gave a dinner last night at her house, 6 East Eighty-seventh street, for her sister, the Hon. Mrs. Frederick Guest, who arrived from England yesterday.”  The 60 dinner guests were joined by others afterward as artists from the Metropolitan Opera entertained.

As spring blossomed in New York a few months later, the two Martin children would suffer a loss.  The windows of the mansion were opened to let in the refreshing March air.  It was all too tempting for the children’s pet South American macaw.

“The bird was of exceptional plumage, and being very tame was allowed to roam at will in the children’s part of the house,” reported The New York Times on March 22, 1914.  “Finding a window open the bird flew out across the vacant lot at the rear of the Martin residence.”  Although a reward was offered for the bird’s return, the newspaper said that the children “are mourning the loss of their pet.”

When the Martins decided to sell the mansion in 1916, The Times made note of the elite neighborhood.  “Diagonally opposite is the Henry Phipps home, on the northeast corner of Fifth Avenue, and on the southeast corner, separated from the Martin home by the Benjamin dwelling, is the new house lately finished for the banker, James E. Speyer.  On the vacant plot in the rear, on the north side of Eighty-sixth Street, William Woodward is erecting a large residence.”  The Real Estate Record & Builders’ Guide added “At Fifth avenue and 86th street, Morton Plant is now building his new home, which will be completed next year.” 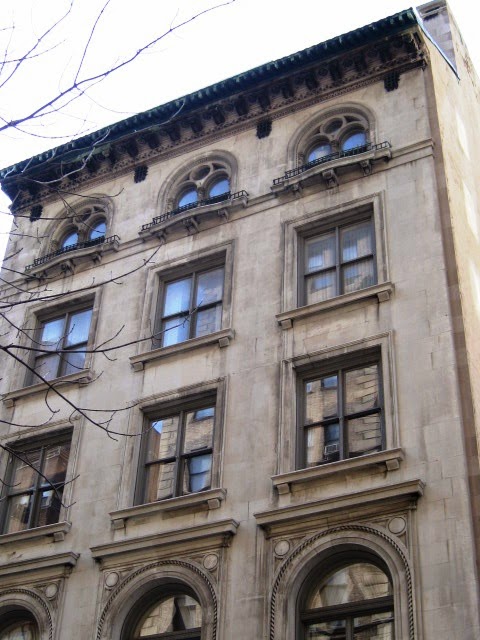 The house was sold for a reported $500,000 to Walter Phelps Bliss.  His father, George Bliss, was a founder of the banking firm Morton Bliss & Co.   By now Walters wealth was estimated at about $15 million.   When he married Katharine Baldwin in 1897, William Rockefeller was been his best man.  Now he wasted little time in adding his own touch to the 87th Street mansion.  In May 1917 he hired Hiss & Weekes to prepare plans “for the alteration and extension” of the mansion.  The anticipated cost was $7,500.

War upset many of society’s wedding schedules and the Bliss family was not immune.  Daughter Ruth Baldwin Bliss was a member of the Junior League and her wealthy fiance, Hermann C. Schwab was a Harvard graduate and member of the exclusive Union Club.  When their engagement was announced in November 1918, he had risen to the rank of captain in the U.S. Army.  The New-York Tribune reported that Ruth would “be an Easter bride.”

The military had other plans.  On March 19, 1919 The Sun reported “It was originally planned to have the wedding in Easter week, but as Capt. Schwab is obliged to sail for China on April 17, the date has been advanced.”  Instead the “quiet affair” was held in Grace Church on April 2, followed by a reception in the 87th Street house.

Later that year the house glowed as debutante entertainments for Ruth’s sister, Katharine, took place.  On December 30 the New-York Tribune described the “small dinner dance” in the house.  “The dinner was one of eighty covers, and, like the dancing which followed, was for the younger set.  A seated supper was served from midnight on.”

The Bliss family also maintained a country estate, Wendover, in Bernardsville, New Jersey.   Their routine was disrupted in 1924 when the 53-year old banker rode the Lexington Avenue subway.  Just as approached the Brooklyn Bridge station, Walter Phelps Bliss slid down in his seat, dead of a heart attack.

Katharine Baldwin Bliss remained in the house.  For years she hosted the sewing classes of the Clothing Committee of St. Luke’s Hospital.  On March 22, 1927 she announced the engagement of Sibyll Baldwin Bliss to Gouverneur Morris Carnochan.  The New York Times said “The engagement is of wide interest owing to the prominent of both families.”

Finally, in January 1941, Katharine moved to a sprawling Park Avenue apartment and leased the mansion to the Soviet Government for use as a private school for the children of consulate employees.  “The Russian officials pointed out, however, that the house had been taken in line with the Soviet plan of providing suitable school facilities for the children of Russian diplomats and other Russian families temporarily living in this country, the idea being to give them instruction equivalent to that which the Russian children would enjoy in elementary and high schools in their own country.”

About 70 Russian children attended school in the former mansion, which was partially converted to living quarters for some teachers.  But the school had barely begun operating when building inspectors reported violations, saying “as a school it needed fire escapes, a sprinkler system to guard against fires, and other special facilities.”  As a private home, these were unnecessary; but now as a multiple dwelling and school facility, they were required by law.

The Russians claimed diplomatic immunity against New York law and refused to comply.  Mayor La Guardia preferred not to rock any diplomatic boats and looked the other way.  But in 1947, with a new administration, the City lost patience when the Soviets refused to pay its water bill.

Threatened with eviction, the Soviet Government went to court.  Then, somewhat abruptly on June 2, 1948, newspapers announced “The Russian Private School at 6 East Eighty-seventh Street, conducted since 1941 for the children of Soviet Union officials and employes in the New York area, will be closed when its term ends tomorrow.”  The children, aged 9 to 18 years, were returned to the Soviet Union.

The building was taken over by a much different group, the Liederkranz Club.   A German singing society founded on January 9, 1847, it was originally known as the Deutscher Liederkranz der Stadt New York.”  The club flourished, occupying several lavish structures before settling in the Phipps mansion.

On December 28, 1950, journalist and theatrical producer Leslie Havergal Bradshaw attended a private dinner in the club.  Guests were thunderstruck when the well-known figure suddenly died at his table.

The club that carved its name above the entrance remains in the house today—the last Gilded Age mansion on the block.   In Anne Phipps’ garden stands the bronze statue of Polyhymnia, the Greek muse of sacred poetry.  Executed by sculptor Giuseppe Moretti, it was unveiled in 1896 for the 50th anniversary of the Liederkranz Club.  When the organization moved to 87th Street, Polyhymnia came along.


photographs taken by the author
Posted by Tom Miller at 2:52 AM