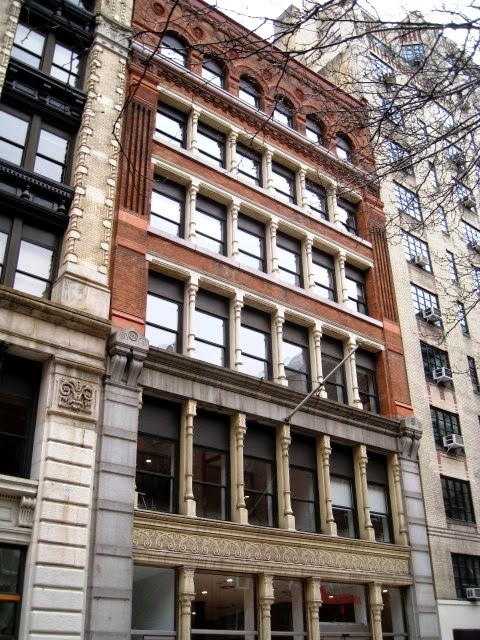 Cornelius Vanderbilt came from a humble background.  He started his career at the age of 16 by operating a sailboat owned by his parents.   The ambitious young man turned that into a ferry service; then branched into transporting small cargo.

By the early 1840s he had amassed a fortune and began rubbing shoulders with Manhattan’s elite.  He summered in Saratoga Springs and, in May 1845, took a major step by beginning construction of a 40-foot wide red brick mansion at No. 10 Washington Place.  Cornelius and his wife, Sophia, already had 13 children (one died at a very early age in 1836).   Directly behind the property, on West Fourth Street, was Vanderbilt’s office.

The mansion was finished in November 1846.  According to The New York Times, “It is four stories high, with a basement.  The edifice cost about fifty-five thousand dollars when completed, and the ground on which it stands cost $9,500.”   For anyone who had doubted it, the Vanderbilts had arrived.   The total cost of his new home would translate to about $2 million today.

The Times said “It is reckoned to be one of the strongest and best constructed buildings in the City…The parlors, which are very large and commodious, are on the first floor.  They are two in number, situated on the right of the entrance, opening into each other and connecting with a small extension in the rear, from which a door leads into the dining-room.”

The newspaper described the dining room, library and reception rooms on the first floor, saying they “are elegantly furnished, but contain very few works of art.”  The paintings were, for the most part, of Vanderbilt’s ships; there was a marble bust of the Vanderbilt; and in the dining room “a picture of the Commodore in a road wagon, wearing a white hat and driving a favorite span of horses.”

The second floor housed Sophia’s boudoir, connecting to Vanderbilt’s bedroom; and his “house office.”   The third floor contained family bedrooms and the fourth had “rooms for the domestics.”

Following Sophia’s death in 1868, Vanderbilt married his cousin, Frank Crawford Armstrong, on August 21, 1869.  (Newspapers routinely called her Frances; yet she was unfortunately named for her father's law partner before her parents knew what the sex of the baby would be.)  She was 45 years younger than he.   As Manhattan’s wealthiest citizens gradually abandoned the neighborhood, moving north along Fifth Avenue or into Murray Hill, the Vanderbilts remained.    When Cornelius died on January 4, 1877, after being confined to the house for about eight months, the mansion passed to his wife.  Vanderbilt’s fortune had grown to about $150 billion in today’s dollars.

On May 3, 1885 The Sun reported that “Mrs. Frances Vanderbilt of 10 Washington place, widow of the Commodore, who is sick with pneumonia, is getting worse.”  The following day Mrs. Vanderbilt died.

Five years later, on February 8, 1890, The Evening World reported that the mansion would be torn down.  “Once there stood a row of wide four-story and basement brick houses, with brown-stone stoops and window-trimmings, on the south side of Washington place…They were the homes of some of the wealthiest old Knickerbocker families in Gotham.  None but the bluest-blooded people were ever received or entertained in those mansions.

“Only two of the old mansion remain, and one of them, the most notable one, was sold the other day to a merchant for over $200,000.  He intends to tear down the house about the first of May, and build a mammoth emporium in its stead.”

Brothers Isaac and Henry Meinhard replaced the Vanderbilt mansion with a six-story loft and store building designed by Richard Berger.  It was completed in 1891 and was the latest in late Victorian taste.  Berger used a variety of materials—limestone, cast iron, brick and terra cotta—to produce a handsome yet utilitarian structure.   The cast iron window framing made expanses of glass possible, allowing natural light into the lofts.  Berger creatively used brick to suggest two-story fluted pilasters flanking the fourth and fifth floors, and topped the structure with a Romanesque-inspired row of arched openings highlighted by terra cotta medallions. 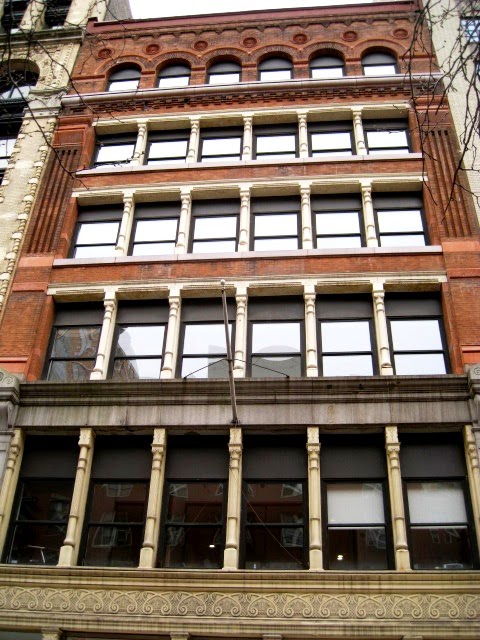 The new building boasted elevator service and young Benjamin Mingoltie was hired as an elevator operator.  Catastrophe occurred on February 2, 1892.   According to The New York Times the following morning, he “was caught yesterday afternoon between the shaft and the elevator car platform.  At the St. Vincent’s Hospital last night the doctor doubted if he could recover.”

Among the first tenants was Roberts, Cushman & Co., importers.  The business had started in 1856 as a small hat store on Waters Street.  Now run by brothers the Roberts brothers, Christopher, Nathan and Richard, the thriving operation imported millinery trimmings and ran its own hat band mill in Paterson, New Jersey.

Another of the initial tenants was Levy Brothers & Pincus, wholesale dealers in clothing.  In 1894 the firm was in financial trouble and filed for bankruptcy.    Its trouble would be compounded the following year when, on May 3, 1895, it was charged with “conspiring to defraud their creditors” in the Supreme Court.

Like the other loft buildings in the area, No. 10 Washington Place was occupied mostly by apparel and millinery firms.    In June of 1900 Roberts, Cushman & Co. leased the entire building from the owners, Henry and Isaac Meinhard.

The firm employed John Floyd Haigh as an “expert accountant.”  Haigh’s brother, Robert, also worked in the company. On Monday morning, May 20, 1901 shocked workers no doubt had only one topic of conversation.  The previous Friday evening John Haigh had gone home to Pelham, New York and proceeded to poison his son and then himself.   His widow and brother told officials, according to the New-York Tribune on May 19, that they were “of the opinion that the crime was the result of an unbalanced mind, due to overwork or worry.”  The newspaper said “Coroner Banning decided that Haigh killed himself and the boy while insane or despondent.”

In 1917 the Meinhard estate, through its managing agent Manheimer Bros., commissioned George and Edward Blum to do $3,000 in renovations.

World War I instilled patriotism in Americans nationwide and Roberts, Cushman & Co. was not immune.  In 1918 the firm received checks here for The Sun Tobacco Fund.   By February 9 the fund had exceeded $194,000 which was used to send tobacco products to fighting doughboys.   One soldier, L. H. Leist who was on the front with Company A, 503rd Engineers wrote to the Fund, “Thank you kindly for the tobacco, which is a Godsend to us who appreciate good American smokes.  Our men are well and in the best of spirits.”

After three decades in the building, Roberts, Cushman & Co. purchased No. 10 Waverly Place from the Meinhard estate in June 1920.  The American Hatter said of the firm “In addition to its headquarters at 10 Washington place, where the office, stockroom and salesrooms are maintained, the firm conducts a leather sweat factory and also owns and operates two hat band mills at Paterson, N.J.., Pompton Lakes, N.J., and where ‘the largest line of hat bands in the world’ is manufactured.”  (The “leather sweats” mentioned referred to the sweat bands placed inside men’s fedoras and similar hats.)

Within two years the building would be assessed at $90,000.   Leasing space from Roberts, Cushman were apparel firms like Malawista Bros. “makers of hand tailored Malbro Clothes for men and young men;” and millinery companies such as Herman Shapiro, “ladies hats” on the second floor in 1928; and Marcus Sabrin, dealers in hat bands on the fourth floor in 1929.

Roberts, Cushman & Co. sold the building in May 1929, triggering a rapid-fire turnover.    In June it was resold, and again in October, and once more in 1930.  Nevertheless, Roberts, Cushman stayed on as a tenant.

With the millinery and apparel districts moving north of 34th Street in the 1930s, the building saw a change in tenants.   Somewhat surprisingly, when it was lost to foreclosure in 1936, Roberts Cushman & Co. repurchased it.   The Times mentioned “the buyer has occupied a large part of the building for forty-five years.”

It was, however, the last remnant of the old millinery district.  The other tenants in the building in 1937 included the Varick Electric Co., the North American Dye Works, Inc., Jacob Diamond, and M. J. M. Novelty Co.  Varick Electric would remain in the building for years, manufacturing electric heating pads; yet in 1948 Roberts, Cushman was still here selling hat bands.

In 1972, now owned by New York University, the building received a sympathetic restoration with direction from Philip Johnson and Richard Foster.  No. 10 Washington Place became home to the school’s Institute of Afro-American Affairs.   Among the Institute’s activities was the publication of Black Creation, a quarterly literary journal; and the Quarterly Review of Black Arts and Letters, edited by Fred Beauford.  In the 1980's the schools Journalism Department became headquartered in the building, now called Carter Hall. 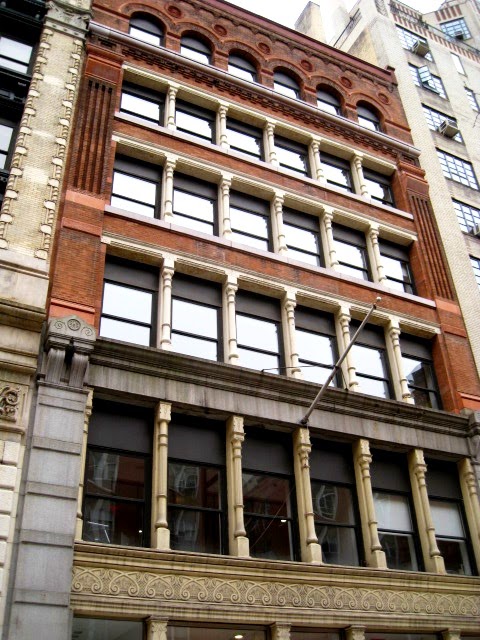 Although the cornice has been lost and the windows, understandably, replaced; Berger’s handsome loft building  retains its integrity—a superb example of the commercial structures that swallowed up Cornelius Vanderbilt’s refined residential neighborhood.