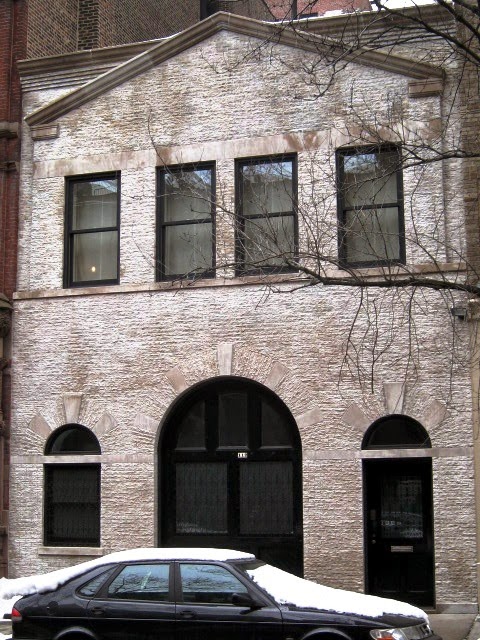 In the first decade after the Civil War Manhattan’s wealthiest citizens were still clustered below 58th Street.  As Central Park took shape, well-to-do families moved into commodious rowhouses sprouting on the blocks between Fifth and Fourth Avenues further north.  Later renamed Park Avenue, Fourth Avenue in the 1870s, with its soot-belching trains running down the center, was a dividing line of sorts.  The wealthiest homeowners were to the west and the less affluent to the east.

The homes along the East 91st Street block between Park and Lexington Avenues in 1879 were, for the most part, attractive brownstones built on speculation for merchant class families.  At least one stood out, however.  No. 112 was a quaint wooden structure, 25-feet wide, where the family of Richard C. Greene lived.  Greene worked for the Manhattan Gas Light Company and had served in Company B. 37th Regiment during the Civil War.  The New-York Tribune noted that he “was with the regiment on every occasion when called into service in 1862, 1863 and 1864.”

Here, in October 1879, the funeral of Greene’s father-in-law, 72-year old Ellas Tillotson, was held.  By 1890 daughter Josephine would be teaching in the Girls Department of Grammar School No. 77, on First Avenue between 85th and 86th Streets.  Richard Green was a devote Episcopalian, and when the Church of the Beloved Disciple opened on 86th Street and Madison Avenue in 1883 he became a Senior Warden.

It would be there, on July 22, 1893, that Richard C. Greene’s funeral was held.  At the time of his death he was still working for the Gas Light Company after nearly 40 years.

By the spring of 1905 the house was owned by Mrs. Sarah Rosenberg, described by newspapers as “an aged woman.”   Early in April that year Edward Perkarz, who had arrived in New York from Bohemia three months earlier, answered an advertisement for a boarder.  Perkarz, who made his living as a harness maker, paid Sarah $1.25 a week.

The seed of tragedy and unspeakable horror was planted when Perkarz tossed out an old, worn out money pouch.  He saw the frugal old lady retrieve it, then “stuffed some bills in it, and wore it around her neck.”

A few nights later Perkarz, who had been drinking heavily, noticed the money bag around Sarah’s neck as she stood in the kitchen.  He told detectives later “there came over him an uncontrollable desire to have money enough with which to purchase liquor.  A sight of the money bag was sufficient enough to rouse him, and, picking up a harness marker’s hammer, which he had brought home several days before, he struck the old woman over the head.”

Sarah fell to the floor and Perkarz struck her two more times.  He snatched the money bag contained $12 off her neck and, as he prepared to leave, was concerned that she was still alive.  Detectives told the court, “He dragged her to the rear room, placed her on the bed, and cut her throat.”

Sarah Rosenberg’s body was not discovered for nearly a week.  Perkarz was arrested after, according to The New York Times, he had “bought himself a gaudy suit of clothes, and said he spent the rest of the money in drink.”

Edward Perkarz told the arresting officers “If you had only given me a few days more so that I could get the price of my fare to Europe, I would have been back home.  Now I suppose you will kill me.  How soon will it be?”

The wooden house was sold to T. W. Shannon.  By now Fifth Avenue across from Central Park was lined with lavish mansions.  Shannon and his wife lived in an impressive home at No. 5 East 92nd Street.    Wealthy homeowners carefully chose the location of their private stables—far enough away that objectionable noises and smells were not an issue; but close enough that the wait for one’s carriage was not too long.  The old frame house on 91st Street was a perfect site for Shannon; it was significantly less so for those living on the entirely residential block.

On April 14, 1906 the Real Estate Record & Builders’ Guide reported that James S. Maher had completed plans for a two-story and basement private stable for Mrs. Shannon.  “The front will be of limestone and rock faced brick.  Work is to commerce immediately,” said The Guide.  The cost of the new structure was estimated at $15,000—nearly $300,000 in today’s dollars.

Between Maher’s filing of the plans and the beginning of construction, things changed.  Instead of limestone the completed stable was faced in brick and accented with stone.    Maher used the contrasting limestone in bandcourses, in voussoirs which tumbled over the arched openings of the street level, and in the trim of the prim classical pediment.

The commodious second story provided housing for Shannon’s employee, Patrick Conway and his family.   Patrick had married the former Mary McGarrity and the couple had two children, John Joseph and Mary.   Somewhat surprisingly, Mary Conway was listed as a breeder of Pekingese dogs while living here, and was also a judge in dog shows.

On June 8, 1915 John Joseph died and his funeral was held in the upstairs rooms on Thursday, June 10 at 9:30 a.m.   Two years later daughter Mary qualified for a university scholarship in the Regents’ Examinations.  The Conways were still living upstairs as late as 1922.

In 1924 the 32-year old L. Gordon Hamersley demolished his father’s spectacular mansion at No. 1030 Fifth Avenue and erected a modern apartment building on the site.  Each apartment occupied a full floor and were offered at prices ranging from $54,000 to $112,000.  Hamersley reserved a 23-room penthouse for his own use.

With that project completed, he looked to housing his automobiles.  On April 2, 1924 the New York Evening Post reported that he had purchased the “two-story private garage” at No. 112 East 91st Street.  Real estate listings described it as housing five automobiles with “dwelling upstairs.”

As the decades passed, the neighborhood around the brick building was no longer considered on the “wrong side” of Park Avenue.  Exactly 80 years after L. Gordon Hamersley purchased No. 112 for his automobiles, it was converted to a private home.  The little building, now painted gray, is as much as surprise on the block today as was the wooden house here in 1878 and the private stable that replaced it in 1906.