On Tuesday morning, April 6, 1852, heartbreak visited the family of G. Frederick Ziegler.  The engraver’s 2-year old daughter, Ida, suddenly suffered a fit of convulsions.  While her helpless family helpless looked on, the toddler died.  The little girl’s funeral was held in the house at No. 83 Horatio Street three days later.

Before the end of the year the Ziegler house was demolished.  Real estate developer Henry A. Nelson replaced it with a trendier brick-faced Greek Revival home that rose three stories over a brownstone English basement.   A delicate wrought iron railing trailed down the steep stone stoop to embrace the slender newels.   To the side a horse walk —its doorway capped with a brownstone lintel matching those of the windows-- led to the rear yard where there was a brick stable

The house was purchased by real estate investor Edward J. Straut, who also bought several nearby structures including No. 76 Horatio Street.    By the 1870s No. 83 was being operated as a boarding house, with blue-collar tenants like George H. Forman, a “smith;” Jacob C. Miner, a miller; James R. Gale, whose occupation was listed in directories as “ice;” and Jacob Miner, a plasterer.

Edward J. Straut died on September 10, 1881.  His estate retained possession of the house, leasing it as he had done.   Five years later William Colwell, who captained a small vessel on the North River (later renamed the Hudson) was living here.  In the spring of 1886, what should have been a normal charter ended up with Colwell in jail.

The Swedish warship Balder was docked in the river just off 23rd Street.  On Thursday evening March 31 its officers went ashore to attend a Swedish festival.   At midnight they returned to the 23rd Street dock and hired William Colwell’s boat to take them back to the Balder.   According to The New York Times a week later, “the night was dark, and the boat ran afoul of the anchor chains, was capsized and all hands were thrown into the water.”

The crew of the ship rescued everyone and Colwell and his boatman were taken aboard.   They were given uniforms from the officers’ wardrobes to replace their wet clothes, and cared for overnight.  When they were taken ashore the following day, they promised to return the officers’ clothes as soon as they could get theirs dry.

But once at home the men forgot their promises and their debts to their rescuers.  The New York Times reported on April 7, “the Swedish officers are still mourning the loss of their cast-off uniforms.  Yesterday Colwell was arrested and Justice Ford remanded him for examination on a charge of larceny.  His friend is at large.”

At noon on June 28, 1891 the Straut family sold both No. 76 and 83 Horatio Street at auction.  Rather interestingly, the auctioneer, L. J. Phllips, described No. 83 as a “three-story and basement brick apartment dwelling.”

By 1899 Charles Tidemann, who listed his business as “cordes, horses, etc.” lived here and would remain through the turn of the century.   The house would continue to see boarders come and go; not all of them as hardworking and respectable as its earliest residents.

Eighteen-year old George Smith was living here in September 1919 when he and a friend, 20-year old Thomas Hodge, were arrested for grand larceny.  The two confessed to police that they had stolen the motor car of Mrs. Stacy Moore from a garage on West 12th Street.  Smith’s bad luck continued two years later when he boarded a bus returning to the city from Coney Island on July 7, 1921

Smith was among 50 passengers on the bus when it swerved to avoid hitting an automobile at Cropsey and Stillwell Avenues in Brooklyn.   “The rear of the bus struck a telegraph pole, throwing off George Smith…who was taken to Norwegian Hospital suffering from serious injuries to the spine and head,” reported The Evening World.  Ironically, none of the other passengers was hurt and the bus sustained no damage.

At the time No. 63 Horatio was owned by Marx Ottinger, a real estate operator who owned more than 60 properties in New York City.  In 1926 his estate liquidated all of his real estate, including No. 63, which was purchased by Catherine W. Porter.   She would not hold on to the property for long.  In reporting on May 1, 1927 that she had sold the house, The New York Times noted, “It will be remodeled into apartments.”

The residents moving in to the renovated apartments were less working-class than their predecessors.  Among them were merchant seaman Warwood E. Mason and his wife, Alice Trumbull Mason who signed a lease in 1932.  The newlyweds had been married about two years earlier.

Alice was an artist, whose ancestor was the renowned painter John Trumbull.  She had studied in Rome and Britain, as well as the National Academy of Design in New York.  In 1929 she had became focused on abstract art.  The couple’s daughter, Emily, who was born the same year they moved into No. 83 Horatio Street, would go on to a career in abstract art as well.

It was around this time that Alice temporarily gave up painting to write poetry.  She knew Gertrude Stein and the two corresponded somewhat regularly.   Alice took up the paintbrush again in 1934.  When she exhibited her work in the Washington Square Art show the following year, she was the only abstractionist among the 400 exhibitors.

All was not content in the Mason household, though.  The New York Times later attributed Alice’s rare exhibiting of her work to “increasing bouts of depression and withdrawal to which her difficult, embittered personality was subject.”  The newspaper said that she and her husband “settled into a kind of domesticity.”

Upon her death in 1971 more than 200 paintings were found in her studio.  Her son-in-law later stated that she had sold perhaps 10 paintings during her lifetime.  Her works now hang in the Metropolitan Museum of Art, the Museum of Modern Art, the Brooklyn Museum and the Washburn Gallery, among other world-renowned collections. 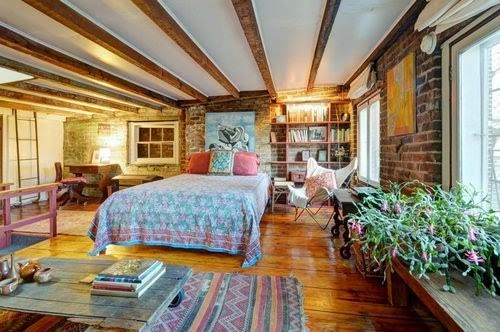 The house on Horatio Street had become home to another artist, Marjorie Colt, and her husband.  They paid $37,000 for the house in 1959.   A renovation was done in 1990, returning the house to what the Department of Buildings deemed a "single family dwelling" with a basement apartment.  Beginning in 1992 Marjorie operated a bed and breakfast here, renting single rooms for $100 per night.

After half a century in No. 83, Marjorie Colt put the house on the market for $10.8 million in 2014.  Her broker called the property a “jewel box.”   While much of the interiors have been essentially gutted; the charming façade still reflects what a real estate agent called “the romance of 19th Century New York.”

non-credited photographs taken  by the author
Posted by Tom Miller at 3:25 AM