When Trinity Episcopal Church announced in March 1803 its intentions of erecting a chapel of convenience north of the city on what would be Varick Street near Hudson, an outcry ensued.  The area was undeveloped and boggy, filled with reeds and overrun with mosquitoes and snakes.  Undeterred, Trinity erected St. John’s Chapel, the focal point of what would become an exclusive residential neighborhood surrounding a landscaped park.

The area north of St. John’s, known as Lispenard’s Meadows, was equally unpleasant despite the agreeable name.  But the arrival of brick mansions and a stately Georgian chapel fostered an interest in developing the surrounding land.  In 1817 an ordinance was passed to fill in the marshy Linpenard’s Meadows and two years later a sewer was laid along the length of Canal Street, which provided further drainage.

It was not, of course, just the wealthy who were moving northward and in 1826 the newly established Dominick Street saw quaint working class dwellings erected.  The block between Varick and Hudson Streets saw no fewer than a dozen Federal style homes built that year.  Among them was No. 32, constructed by Smith Bloomfield as one of five identical speculative homes.

He had purchased the lots from Robert and Sarah Livingston on March 10, 1826.  Sarah had inherited the property from her grandfather, Anthony Lispenard.  Bloomfield would move into one of the homes, No. 28, and he rented the little house at No. 32 for years.

Charming in its simplicity, the brick-clad home was two and a half stories tall with the entrance at street level.  A handsome cast iron fence topped with palmettes guarded the basement and two high, stately dormers sat above the plain cornice.

As expected, No. 32 was rented by working class tenants.  In 1834 John B. Gedney, a “forwarder,” lived here with his family; and in 1856 resident Solomon W. Johnson listed his occupation as “agent.”

On October 14, 1862, a year after the first shot was fired in the Civil War, The New York Times notified voters that No. 32 Dominick would be the “designated place at which elections shall be held” in the Fourth District, Eighth Ward.  Within the year the war would visit the Dominick Street more personally.  .  On August 26, 1863 E. Oven was living here.  That day not only was his name pulled in the military draft; but so was that of next door neighbor J. Manley who lived at No. 34.

It would seem that by now more than one family resided in the little home.  Nine months after Oven was drafted Mrs. Ann Hagan died here, on May 4, 1864.  If the 78-year old woman’s life had been rather ordinary, her passing would not be.  The New York Times informed readers that her body would be taken from the Dominick Street house on Saturday morning, May 7, “to St. Joseph’s Church, where a solemn Requiem Mass for the repose of her soul will be held, thence to St. Patrick’s Cathedral for interment.”

By the end of the war the neighborhood surrounding Dominick Street had greatly changed.  In 1867 Trinity Church shocked New York City be selling St. John’s Park to the Hudson River Railroad Company.  The company immediately laid plans to replace the refined private green with a freight terminal.  But while most homeowners fled, leaving their residences to be converted for commercial purposes or razed; the Dominick Street block remained resolutely intact.

Smith Bloomfield had sold No. 32 to Mary McKinley in 1866 (spelled in some documents as McKindley).  She still owned the house on March 25, 1873 when she joined other property owners on the block, including Smith Bloomfield, in protest against their assessment for “paving Dominick street from Clarke to Hudson street.”

Mary’s heirs sold the house to carpenter John F. Wilson in 1878.  He and his family lived in the upper floors while he rented the first floor to families like that of bookkeeper Thomas Sutter who was here in 1880.

As the century drew to a close Charles W. Ottiwell lived here.  An owner of “steamtugs,” he died of pneumonia in the house on November 23, 1898 at the age of 67.  His funeral was held here on Friday morning, November 25.

As the 20th century dawned the Dominick Street block was an anachronism among the rumbling freight trucks and warehouses.  On February 13, 1910 The New York Times remarked that “the owners have refused to be driven out and still live there in trim houses, with neat yards and gardens.”

Two years later Elizabeth W. Morse, who had inherited No. 32 from John F. Wilson’s estate, conveyed the house to the Church of Our Lady of Vilnius.  The Lithuanian church was located nearby at No. 570 Broome Street.  The gift rescued the house from the alterations that were happening along the block.  The church used the house as its rectory, keeping its residential architecture intact.

The end of trim houses and neat yards would come to a close for the northern side of the street in 1922.  Construction of the Holland Tunnel resulted in six of the venerable homes to be destroyed.  On the south side, the homes were heavily altered.  But No. 32 survived with even its Federal ironwork unscathed.

George Gruniskas lived in the rectory on January 13, 1947 when his car was stolen from outside.  About two weeks later, on January 27, Patrolmen William Allmendinger and Ernest Vohs of the East 67th Street stationhouse spotted the vehicle parked at a curb.

“With pistols drawn, they stepped alongside the car and ordered the occupants out,” reported The New York Times.  Instead, they were met with a barrage of gunshots.

“The patrolmen returned the fire, emptying their pistols as the car pulled away.”  A car chase ensued.  The police cruiser followed Gruniskas’s car to Lexington Avenue, then north to East 83rd, then west toward Park Avenue.  Panicked, the gunmen abandoned the car and fled on foot.

George Gruniskas got his car back.  But there were seven bullet holes in it. 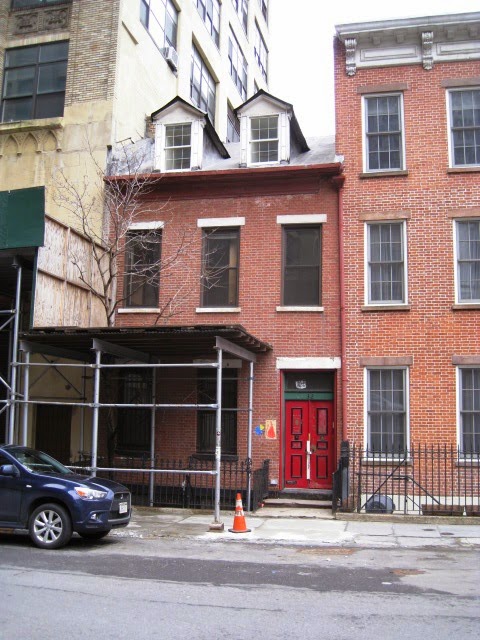 No. 32 Dominick Street served as the rectory of Our Lady of Vilnius until the Archdiocese closed the church in 2007.  The remarkable single family home—a rare Federal period relic in astonishing condition—was designated a New York City landmark in 2012.  It was put on the market a year later for $4.9 million.

non-historic photographs by the author
Posted by Tom Miller at 2:54 AM