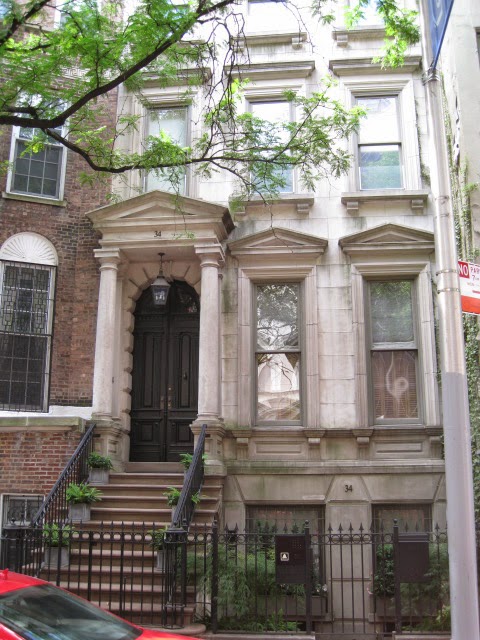 In 1870 construction began on a long row of 11 Italianate stone-fronted rowhouses stretching from No. 30 to No. 50 East 71st Street.  Designed by brothers David and John Jardine, they were the speculative project of developers Winters & Hunt.

Four stories tall, the homes were especially dignified with Doric porticos and carved classic pediments over the tall parlor windows.  The architects introduced an interesting feature of rusticated blocks that framed the entrance, cartwheeling over the arched doorway.

Among the row, completed in 1871, was No. 34 which became home to the Lewis E. Ransom family.  Born in Newark, New York, he had come to New York City two years earlier and founded the L. E. Ransom Company, importers of dyestuffs.

The wealthy merchant and his wife, Phebe, had a son, Lewis Buckley Ransom, who was attending New York City College in 1878; and a daughter Angie.  The family maintained a summer estate in Hempstead, Long Island.  In 1877 he would diversify; going into banking by helping found the Chase National Bank with John Thompson and becoming its Vice President.

Conflicts among the bank's board members ended badly for Ransom.  On November 1, 1886 The New York Times announced that at a meeting of the Board of Directors of the bank the day before, both President John Thompson and Lewis E. Ransom resigned their positions.  Ransom did not give up on banking, however.  He became president of the National Bank of Deposit with offices in the Western Union Building.

Things went smoothly for the bank until the collapse of the economy in 1893.  Early that year the public recognized the shaky financial footing of the country and rushed to the banks to withdraw their money.  Bank runs crippled the economy, resulting in the Financial Panic of 1893—the worst economic depression in the country’s history to date.  Stock prices plummeted, farms were abandoned, more than 15,000 businesses went bankrupt and 500 banks failed.  Among them would be Ransom’s bank.

The Sun gave a biting view of Ransom on May 24 that year  It reported that the National Bank of Deposit “did not open its doors yesterday…President Lewis E. Ransom, after a good night’s sleep, was on hand, as placid and comfortable as you please.  He said he would quit banking and go back to the drug business.

“The depositors were not nearly so serene,” continued the newspaper.  “They banged on the closed doors and wanted to know about things…President Ransom and his subordinate officers comforted them greatly by the announcement that, come what may, they would be paid in full.  A plan to bring about that happy result was immediately put in operation.”

The New-York Tribune, on the same day, was less judgmental towards Ransom.  “There was a steady stream of visiting depositors at the bank yesterday anxious to obtain some idea of the situation.  Some of them were greatly excited, but Mr. Ransom and Mr. Kimball took turns in quieting their apprehensions by statements that the depositors would be paid in full.”

Following the failure of his bank, Lewis E. Ransom, as he promised, devoted his attentions to the dye industry and gave up banking.  His wife soon fell into a serious illness from which she would not recover.

On Monday, April 26, 1897 Phebe Ransom died in the house.  The following day an anonymous letter to the editor of the New-York Tribune appeared, written in florid Victorian prose.  It said she “was well known to a large circle of friends, who loved her for her simple, childlike, Christian character.  She was kindhearted, gentle of speech, full of the sweet sympathy that comes of abounding charity.  The home where her footsteps were tenderly watched through a long and painful illness, the community which held her always in the highest honor, are alike bereaved by her death.”

Sadness turned to joy nine months later when Angie married Dr. Theron Wendell Kilmer.  Described by the New-York Tribune as “a pretty New-Year wedding,” it was held in St. Bartholomew’s Church at 8:00 on the evening of January 5, 1898.  The newspaper said that Angie “is very well known in New-York social circles.”  Despite the couple’s highly visible places in society, the ceremony was understandably low-key.

“Although it is to be an extremely pretty wedding, it will be of necessity a quiet one owing to the death last spring of the bride’s mother,” explained the New-York Tribune on December 12, 1897.

Three months after Angie’s wedding, another society wedding took place when William S. Gould married Ethel Sanders.  Following their honeymoon, they moved into No. 176 Lenox Avenue.  Before many years the Goulds would be living in the Ransom house.

Despite the outward appearances of financial stability, Lewis Ransom lost his home to foreclosure in 1899.  The New York Times reported on April 19 that there was an outstanding debt of $12,273 on the property.  P. F. Hassey purchased it at auction for $30,150—in the neighborhood of $820,000 today.  It quickly became the home of William and Ethel Gould.

Trouble came to No. 34 East 74th Street when the Goulds hired a new butler, Masahorn Inagaki.  The man was engaged to an American girl who lived in Ridgewood, New Jersey and on February 6, 1903 he disappeared.  And so did the $86 worth of Gould silverware.

The New-York Tribune was, at least by today’s views, more than a bit racist in its reporting.  “A detective traced the Jap to Ridgewood, to the young woman’s house.  He was arrested on his return here.  He had a pawn ticket for the missing articles, the detective declared.”

Not long after the arrest of the thieving butler, the Goulds purchased a home one block away at No. 47 East 75th Street.  On April 3, 1903 the Evening Post Record of Real Estate Sales reported that William S. Gould had sold No. 34 to Mary Louise Sullivan.

Mary was the daughter of the deceased Pensacola railroad and lumber tycoon David F. Sullivan.  Upon his death in 1833 he left an estate of $1.5 million.  Now Mary would share the 74th Street house with her mother, Emily; her sister Kathleen, and brother-in-law, Malcolm C Anderson.  Anderson was a director in the New York City and Westchester Railway Co.

The Anderson’s summer home was in Westerly, Rhode Island.  It was in their cottage there, on September 20, 1919 that Emily Sullivan died.  Devoutly Roman Catholic, among the special bequests in her will was $2,000 to the Sisters of St. Mary of Sewance, Tennessee.

Mary Louise Sullivan would live on in the 74th Street house at least through the 1920s.  Her varied interested included a membership in the Audubon Society and the Association for the Aid of Crippled Children.  Annually she donated $10 to the Prison Association of New York in her mother’s memory.

By now the string of houses erected by Winters & Hunt in 1871 had drastically changed.  Edwardian homeowners had either razed and replaced the dated Victorians, or updated them to modern fashionable residences.  But No. 34 remained unchanged—a stubborn dowager among a row of debutantes.

And while other homes would be divided into apartments, it remained a single family home to a succession of well-to-do owners.  In the 1940s it was home to the family of Peter Vischer, editor of Polo magazine.  Later, millionaire newspaper executive Harry F. Guggenheim, president and editor-in-chief of Newsday, moved in. 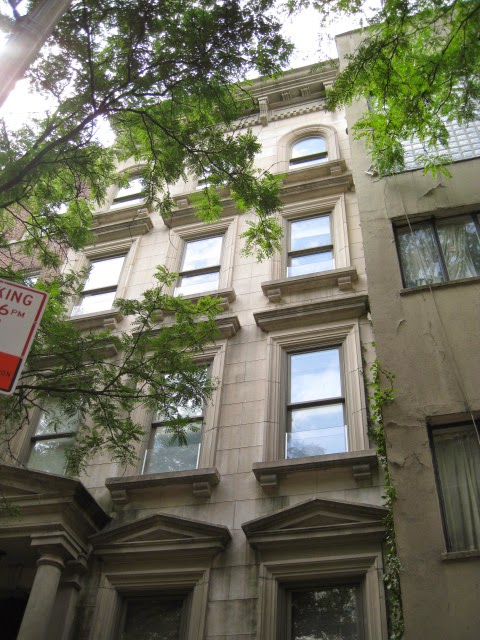 Guggenheim was as well known for aviation as for publishing.  He sponsored Robert H. Goddard’s research of space flight and liquid-fuel rocketry and established the Guggenheim School of Aeronautics at New York University in 1925.  In 1929 he served on the National Advisory Committee of Aeronautics; a position he retained until 1938.

On the night of May 4, 1969 Guggenheim was away from the house.  For several weeks detectives had been following two suspicious men who seemed to be casing the upscale houses of the neighborhood.  Around 4 a.m. the men slipped into the Guggenheim house using a simple burglary tool.

“Minutes later, “ reported The New York Times the following day, “the two men emerged with a bulging, brightly striped Arnold Constable shopping bag and hailed a cab”  In the bag was $3,000 in cash, and an estimated $10,000 in art, family heirlooms and a ball point pen inscribed “Best Wishes…Lyndon Johnson.”

As the crooks, 39-year old Robert Goller and 51-year old Alphonese Cinque, were about to stash the bag in a Grand Central Terminal locker, the detectives descended and arrested them.  Ironically, in 1937 Harry F. Guggenheim had been President of the Citizens Committee on the Control of Crime in New York.

Barely two years later, on January 22, 1971, the remarkable millionaire died at the age of 80.  The residence continued to house interesting owners—such as former Assistant Secretary of Defense for East Asia, James Shinn and his wife who purchased it in 2007.

The Shinns, who did some interior renovations, put the house on the market in 2010 for around $16 million. 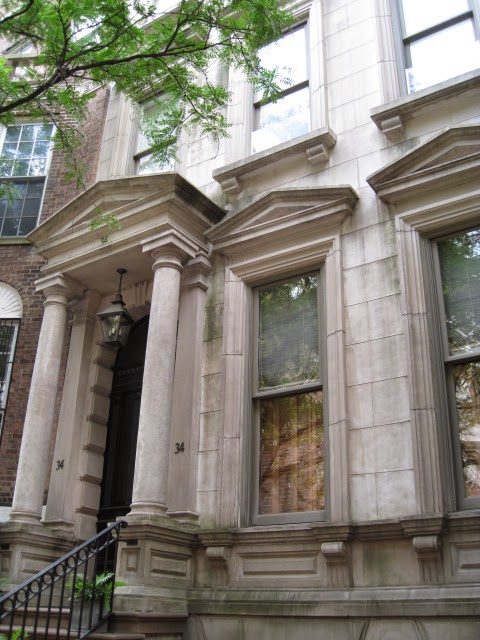 Today the Ransom house looks much as it did over 140 years ago.  The stoop railings and fencing have been lost and double-hung windows replace the original panes.  But the proud Victorian is the last intact survivor of the row built when this block of the Upper East Side was first developed.