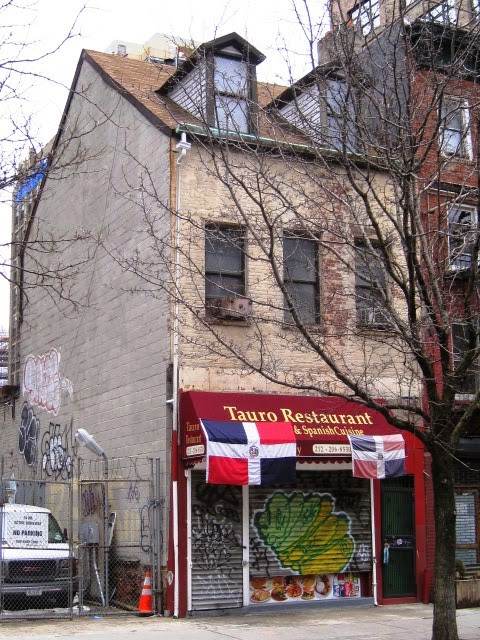 In the first decades following the Revolutionary War, the land known as Lispenard Meadows on Manhattan’s west side north of what would become Canal Street, was swampy and mosquito infested.  But as the city expanded northward, the potential of the nearly worthless land increased.  In 1817 an ordinance was passed to fill in the marsh and two years later a sewer was laid along the length of Canal Street, providing improved drainage.

Streets were laid and Federal-style brick houses for working and middle-class families quickly rose.  One of these was No. 284 Hudson Street, built around 1820.   Like the hundreds of similar homes being constructed simultaneously throughout the city, it was two and a half stories tall and featured two prominent dormers that punched through the pitched roof.   Devoid of pretension, its brickwork forewent the more expensive Flemish bond found in the more upscale houses of the period.

The house became home to Thomas S. Jaycox, who was working for the United States Government by 1831 as a “clerk.”  His salary of $800 that year would translate to about $22,000 today.  Five years later he held the same position but was still earning the same amount.  Perhaps it was his static salary that prompted him to go into the dry goods business by 1841.

When Jaycox went into business for himself there were no standard regulations regarding bankruptcies.  It was sometimes a problem for merchants who extended credit, then found themselves battling any number of local laws in an attempt to regain their losses.

On January 20, 1841 Thomas S. Jaycox added his name to a long list of New York City tradesmen and merchants in appealing to the United States Congress to enact a “uniform bankrupt law.”   Among the occupations of the small businessmen “beseeching” the “honorable body” were fishmonger, auctioneer, grocer, hardware, butcher, oysterman, painter, and gun manufacturer.

By the mid-1850s the Thomas H. Sill family lived here.  In 1855 Thomas Jr. enrolled in Columbia College.  Before long actor, producer and lyricist James Seymour moved in.  A favorite at Niblo’s Garden, he wrote the words to “The Lads Who Live In Ireland” for the play The Duke’s Motto.  Its opening lines were:

My name is Ted O’Mannon, I come from sweet Killarney O,
Sure I can whistle, I can sing, sure I can plough, and I can sow;
And when I’m courting purty girls, I never use the blarney O.

Seymour also acted in the play, which was produced at Niblo’s; playing the part of Carrickfergus, after the original actor took a different role.  The Era Almanack blamed the play’s failure squarely on Seymour.   “Mr. J. Seymour was cast for Carrickfergus.  The change was fatal to the play, which afterwards ran but a short time.”

Seymour’s son was drawn into the acting profession as well.  When Edwin Booth staged Hamlet at his Shakespearean theater, seven-year old Willie Seymour played The Actress.  In casting the boy as a female part, Booth was being true to the historical Shakespearean practice.

On Thursday, September 22, 1864 James Seymour “late of Niblo’s Garden,” as reported in The New York Times, died at the age of 41.  His funeral was held in the house the following day, after which his body was taken to Greenwood Cemetery for burial.

The neighborhood was still mainly residential and mostly respectable.  Within months Dr. Henry F. Hessler had moved into the house.  His seemingly enviable office hours were between 9 and 10 a.m. and 7 to 8 p.m. daily.  The German-born physician would go on to be appointed Professor Clinical Midwifery and German Instructor in Obstetrics at the College of Midwifery.

But by the end of the Civil War the area had become decidedly more commercial.  The ground floor of No. 284 Hudson Street was converted to a saloon by 1876.  Its saloon keeper (who repeatedly changed his surname) was arrested on the evening of March 12, 1876 for violating the Excise law.  At the time of his arrest he gave his name as Adolph Midler.

The Excise law required saloon keepers and liquor dealers to purchase a license—an expense that many found burdensome.   On August 7 a year later, a New York Times reporter visited the office of the Excise Commissioners where crowds of recently-arrested saloon keepers applied for their licenses.  Among them was Adolph Miller (his last name had changed) who had been arrested again and charged with $100 bail.

“While they waited, they talked about the lookout, and consoled with each other on the ‘hard times’ on which the trade has fallen.  Several in the crowd had been locked up the night before, although they had already procured receipts, and these were loud in their denunciations and the shuffling police of the Police and Excise Boards…The Germans were especially loud in their abuse of [Tammany Hall], and many of them swore they would never vote the Tammany ticket again,” reported the newspaper.

Adolph seems to have been conscientious about renewing his license after the unpleasant affair.  On July 28, 1882 he spent $75 on his license, a significant $1,760 in today’s dollars for a small-time bar owner.  He now spelled his surname “Muller” on the application.

When Bonfort’s Wine and Spirit Circular listed his business here in 1890, it spelled his last name “Mueller.”

By the turn of the century Mueller’s saloon was gone, replaced by the C & G Fina “barber fixtures” store.  Upstairs lived policeman James J. Lockhart, his wife Adelphia and their son Harry.  Lockhart had been appointed to the force as a patrolman on February 10, 1897.

As the Hudson Street neighborhood became more industrial, the businesses on the ground floor followed suit.  In 1909 Villone & Co. sold “felt roundings” from here; and by 1913 L. Thomas ran the New York branch of the Chicago based Thomas & Smith, Inc.  The firm manufactured and sold the Thomas’ “Acme” air purifying and cooling system.  The company would remain in the building for several years, selling related products, like power pumps, as well.

As the decades passed, the small brick houses along Hudson Street were one-by-one demolished for hulking warehouses and commercial buildings.  Somehow, however, No. 248 Hudson held on.  In 1946 it sold for $7,300; about $87,000 in today’s dollars. 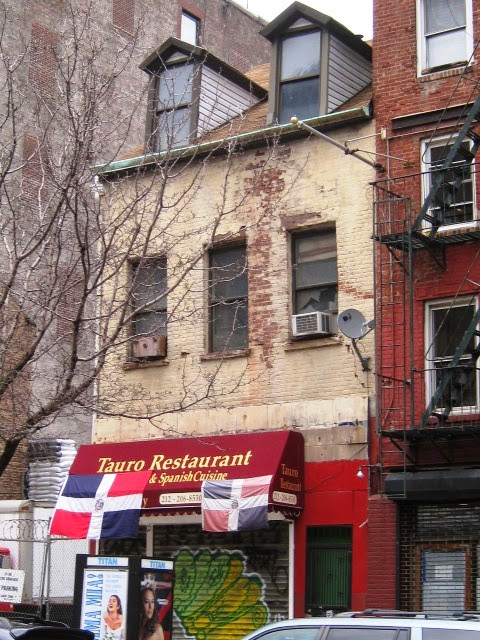 Today a neighborhood restaurant operates in the ground floor where Adolph Muller served lager beer to sailors and hard-working immigrants in the 1880s.  The upper floor and attic survive much as they appeared when Thomas S. Jaycox lived here; one more miraculous survivor from Manhattan’s post Revolutionary decades.