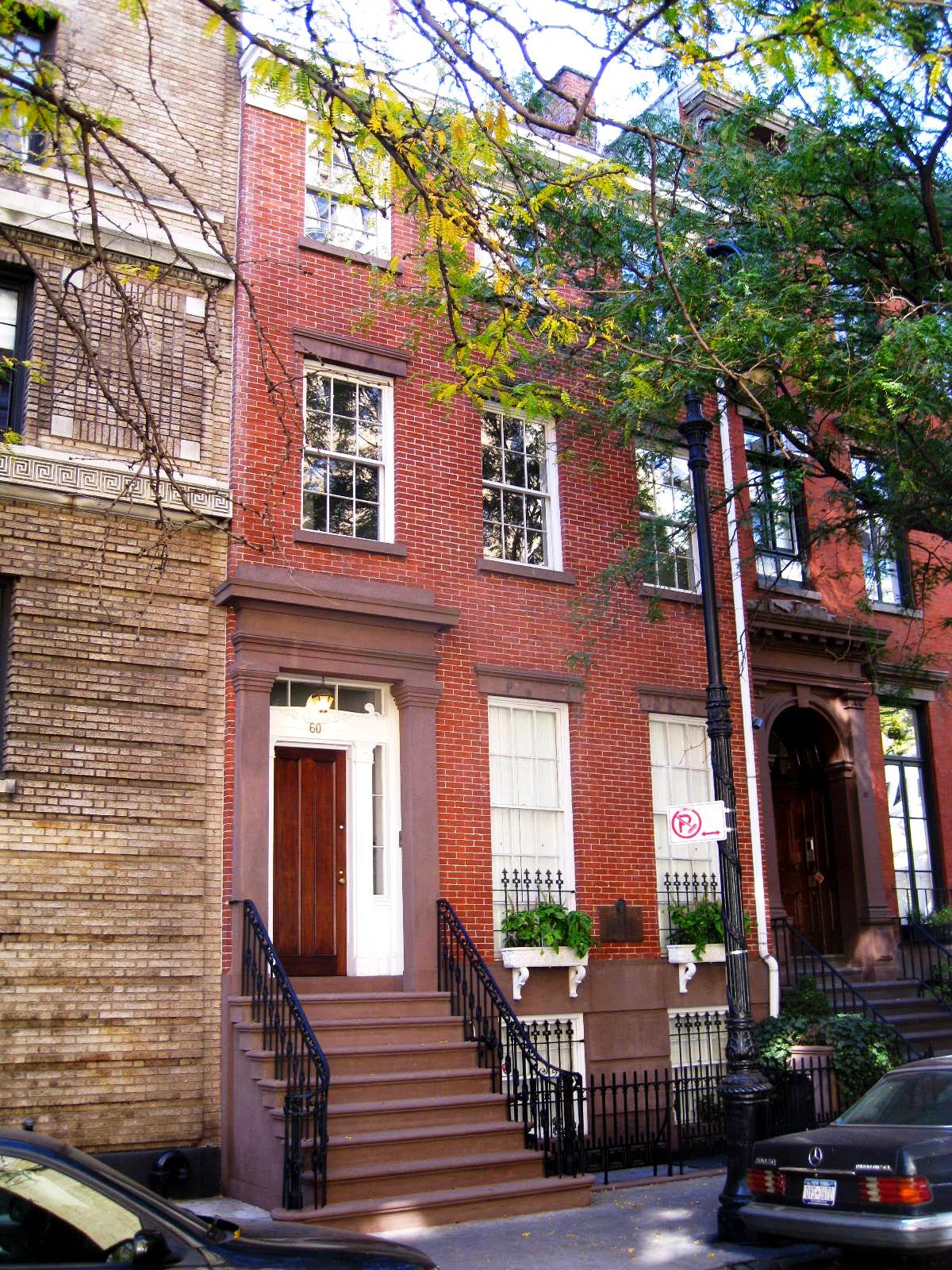 By the time speculative builder Andrew Lockwood erected the string of houses from No. 46 to No. 60 West 11th Street in 1843, homes had been appearing in the neighborhood for more than a decade.  Lockwood was one of the most prolific developers in Greenwich Village at the time.  His new row on West 11th Street was designed in the popular Greek Revival.

Like the other homes along Lockwood’s row, No. 60 was faced in red brick above a rusticated brownstone basement.   Instead of the dormered attic of the Federal style, it boasted a full third floor.  The hefty stone enframement at the top of the brownstone stoop embraced a more elegant entrance—carved pilasters flanked by sidelights, a generous transom, and handsomely-carved entablature.

In 1851, eight years after No. 60 was completed, the Rev. Samuel Cooke arrived in New York from New Haven.  He had been brought to the city by the congregation of St. Bartholomew’s Episcopal Church at Lafayette and Great Jones Street.  Although West 11th Street was hardly near the church, Cooke and his family moved into No. 60.

The New York Times would later recall “St. Bartholomew’s at that time numbered among its parishioners some of the wealthiest men in New York.  Among the Vestrymen who encouraged and aided him in his undertaking were William H. Vanderbilt, Cornelius Vanderbilt, C. G. Williams, President of the Chemical Bank; Alfred M. Hoyt, and William H. Appleton.”

Cooke came from a long and distinguished line of clergymen, going back to Milford Cooke who settled in what would become Bridgeport in 1650.   He and was married to the former Emma Walden.  Their eldest son, Samuel Walden Cooke enrolled in Columbia College in 1860; the same year that the 11th Street house was the scene of the funeral of Maria Pell, Rev. Cooke’s sister-in-law.

Young Samuel excelled in school.  In 1862 he was on Columbia’s list of “Honor Men.”  But tragedy would soon strike the Cooke family.  On Friday morning, December 9, 1864, the college senior died “very suddenly.”  Three days later relatives and the pall bearers gathered at the 11th Street house at 3:00 before heading to the funeral at St. Bartholomew’s Church.

The house was not church property; but was owned by James Gallatin, a wealthy property owner who also owned the abutting houses at Nos. 56 and 58.   When he died on May 28, 1876 he bequeathed Nos. 58 and 58 to his 19-year old grandson James F. Gallatin, and No. 60 to James’s brother, 27-year old Albert Lewis Gallatin.

Both young men were extremely wealthy.   When Albert died at the age of 31 on February 12, 1880, he left his widow, Zefita, $100,000—about $2.35 million today.  But the young man’s unexpected death seems to have triggered a battle over the property.  On April 9, 1881 The Real Estate Record & Builders’ Guide reported that titles to all three of the houses were being contested.

On March 28, 1888 Zefita filed suit against her brother-in-law, James F. Gallatin, and mother-in-law, Harriet I. Gallatin in an attempt to prevent them from taking her inheritance.   The legal battle lasted until June 1895.  By now Zefita was the Countess Rohan-Chabot and lived in Europe.  The New York Times explained that she had “interposed objections to the return of the property to her brother-in-law, but she withdrew them when he signed an agreement providing that a sum should be set aside by which she would receive her income on $100,000.”

The house was sold to Leocadie Farrell who, like the Gallatins, owned much property.  In 1906 she recorded the annual rent on the property as $1,400 “over all repairs.”   The landlady was charging a little over $3,000 a month in today’s dollars.

Mrs. Farrell’s tenant in 1903 was William L. Detmold, a woolens dealer; and by 1910 Edward B. Taber was living here.  That year he helped found the New York Advancement Company; organized to put together a 1913 World’s Fair.  The fair was meant to commemorate the 300th anniversary of the first European settlement on Manhattan Island.

The Farrell family held No. 60 West 11th Street until July 1929, when Leocadie’s estate sold it to Morris L. Florence.  He announced that he intended to alter the house for his occupancy.  The title was put into the name of his wife, Lee Florence.   But, like the previous owners, the Florences leased the house rather than move in.

In December 1933 Dr. Herman L. Kasha signed a lease on the first and second floors, paying $3,120 a year.  He opened his medical practice here; one that would find him in court in 1942.  In a sensational trial that year Kasha was accused of running an abortion clinic in the house.  Reportedly, from 1933 to 1938 physicians city-wide would send patients to No. 60 West 11th Street to have their unwanted pregnancies terminated.

Morris and Lee Florence sold the house about the same time that the ugly affair came to light.   It became home to the family of Alvin Udell.

The house with a brief sordid past received a restoration and renovation when Timothy Forbes, son of multimillionaire Malcolm S. Forbes, purchased it.   His renovations resulted in interior spaces that ran the gamut from Victorian, to Mid-Century Modern, to starkly contemporary.  In April 2012 he sold the venerable home for $11.5 million. 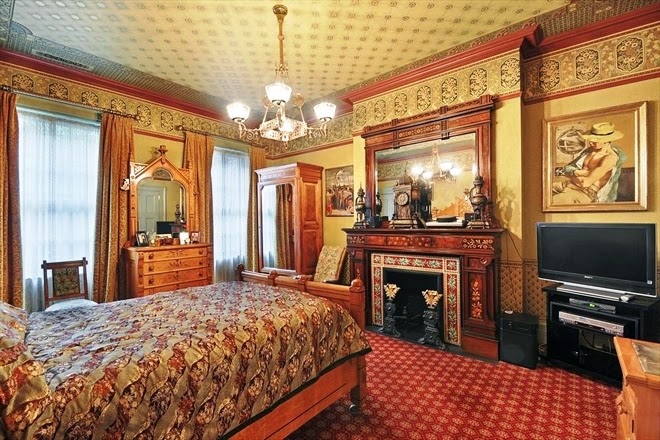 Forbes’s careful attention to the façade, however, resulted in No. 60 looking much as it did when Rev. Samuel Cooke and his family moved in.

non credited photographs by the author
Posted by Tom Miller at 3:44 AM