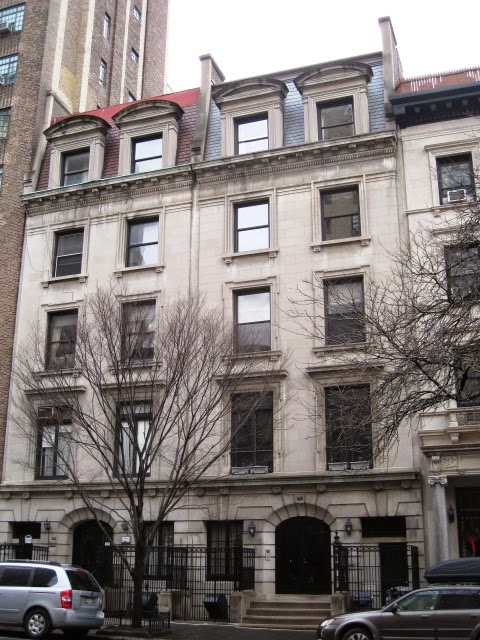 The Central Building Improvement and Investment Company was a little late to the dance when it got into the speculative building frenzy on the Upper West Side in 1910.  In the past two decades the streets and avenues of the neighborhood had seen a frenzy of construction.  Now the firm commissioned Henri Fouchaux to design four upscale townhouses at Nos. 42 through 48 West 86th Street.  The architect had already produced individual residents and five groups of rowhouses on the Upper West Side.

Fouchaux produced four identical 25-foot wide mansions which were completed the following year.  Faced in limestone, the haughty neo-Renaissance style homes had touches of Beaux Arts.  Imposing double-doored entrances sat above shallow stoops and nestled within concave-edged arched openings.  The rusticated bases supported three scantily-adorned stories, two bays wide.  Above a bracketed cornice, steep mansard roofs sprouted tall, stone dormers.
No. 46 was purchased by Emilie Lang (whose name was sometimes reported as Emily Lange).  She leased it to Simon Frankel of Joseph Frankel’s Sons & Co., gem dealers.  A few years earlier, Simon Frankel inadvertently got his name and that of his family firm in the news when he purchased a particular diamond in London.

In 1901 the Frankels had heard of the financial problems of Lord Francis Hope.  He offered for sale the world famous gem known as the Hope Diamond.  Simon traveled to London and purchased the 44-1/4 carat stone for $150,000—about $4.25 million in today’s dollars.  Many thought that Frankel had bought more than a diamond.

Joseph Frankel’s Sons offered the magnificent stone to various millionaires for $250,000.  But the diamond was already tainted with rumors of curses and bad luck; and the Frankels could find no takers.  The Hope Diamond was placed in their vault where it remained for years.  So much capital was tied up in the single stone that the Frankel’s business was in danger of failing by 1907.

The firm finally found a buyer in 1908.  A year later The Sun provided its readers with a follow-up of the curse.  “The diamond was sold to the Russian Prince Kanitovski, who lent it to a beautiful actress of the Folies Bergeres in Paris, and shot her dead from a box the first night she wore it.  Subsequently, it is said, the diamond passed through the hands of a French broker, who went mad, a Russian Prince, who was stabbed by revolutionaries, and a Greek jeweler, who threw himself over a precipice.”

Back on their financial feet, the Simon Frankels could now afford the lease of No. 46.  While here Mrs. Frankel involved herself with the Hospital for Deformities and Joint Diseases, the Jewish Big Sisters and several other charitable causes.  But only a year after moving in, Simon Frankel died on May 17, 1911.

Simon’s widow lived on in the mansion for decades, giving entertainments mostly for her favorite causes.  However an exclusively social event was the dinner she hosted in January 1916 in honor of Mischa Elman’s 25th birthday.  The world-famous Russian prodigy had already played Carnegie Hall eight years earlier.

As the war in Europe made helpless victims of civilians, Mrs. Frankel joined other socialites and celebrities, like soprano Geraldine Farrar, in war relief projects.  In November 1918 she exhibited in the house “infant dresses, petticoats, caps and other garments made from worn out stockings and mill ends.”.   On November 18, 1918 the New-York Tribune said “Miss Farrar, who will attend the exposition, feels confident now that the supply of goods will be maintained and is anxious to enlist school children in making tiny garments, many hundreds of which have been already sent to France and Belgium.”

A few months earlier Emile Lang had sold No. 46 to Jacob Mattern who continued to lease it to Mrs. Frankel.  In the meantime Peter W. Rouse lived in the house next door at No. 48.   Peter’s father, millionaire owner of the Charles Broadway Rouse department store, had caused a stir around the turn of the century when optic nerve atrophy resulted in blindness.  He announced he would give $1 million to anyone who could restore his sight.

In November 1900 the Boston Medical and Surgical Journal noted he “has not withdrawn that offer and resigned himself to the inevitable.  Ever since the announcement was made he has been besieged by all sorts of quacks and ‘healers,’ and during the greater portion of the time he has paid a substitute who was affected in the same manner a regular salary for submitting to experiments and various forms of treatment.”

Peter Rouse and Mrs. Simon Frankel would be next door neighbors for decades.   The Frankel mansion continued to be opened for benefit causes—like the “musicale, conference and tea” given here in March 1919 for the Jewish Big Sisters.    Later that year Mrs. Frankel established a cooperative home club.  It was intended “for working mothers, where they may board with their children,” explained the New-York Tribune on November 15.  “While the mothers are employed the children will be cared for by a matron and kindergarten.”

She was also highly involved in the University Settlement on Eldridge Street “where splendid work is being carried on,” according to The Sun on May 18, 1919

Mrs. Simon Frankel’s generous providing of her home for charitable functions was never more evident than in November 1921 when a week-long sale of dolls was held here.  The American Hebrew & Jewish Messenger announced “In anticipation of the coming Winter season a sale of dolls, big, little, funny, beautiful, hideous, and adorable, but all cheap, is to be held from November 13 to 20, inclusive, from 2 to 6 o’clock at the residence of Mrs. Simon Frankel, 46 West Eighty-sixth street.”

The proceeds of the sale went to the A. Jacob Hospital Social Service, Inc.  The magazine made special note of dolls donated by celebrities.  “Geraldine Farrar, Mary Garden, Anna Pavlowa and Frieda Hempel are among those who have donated dressed dolls, accompanied by autographed photographs, to be sold at the sale.” 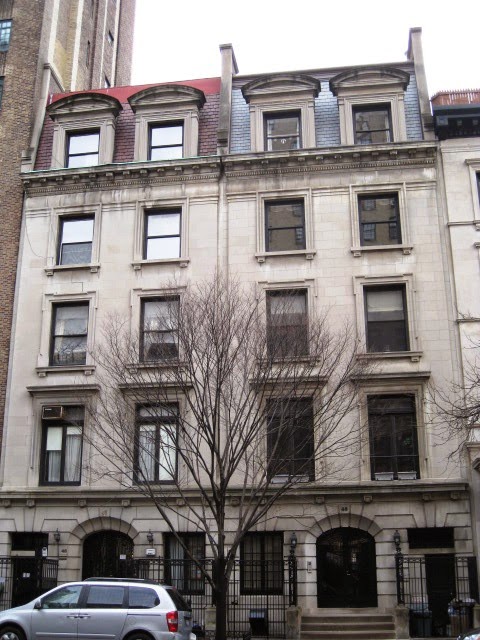 Eventually change would come to West 86th Street.  In 1933, two years after Mrs. Frankel hosted a public concert of The Dorian String Quartet, a group of female musicians, in the mansion; Peter W. Rouses’s house next door was purchased by the exclusive Bentley School.   An adjunct to the East Side school at No. 112 East 71st Street; young scholars from grades 6 through 12 were instructed here. 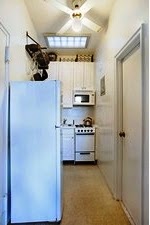 The interiors of the Rouse mansion seem to have survived the conversion process less scathed than those in No. 46.  Handsome oaken paneling and built-ins were preserved.  Photographs of the Frankel house interiors reveal modernized spaces with no detailing.   And yet the exteriors of  both homes remain remarkably intact; remnants of a time when wealthy New Yorkers migrated to the west side of Central Park.