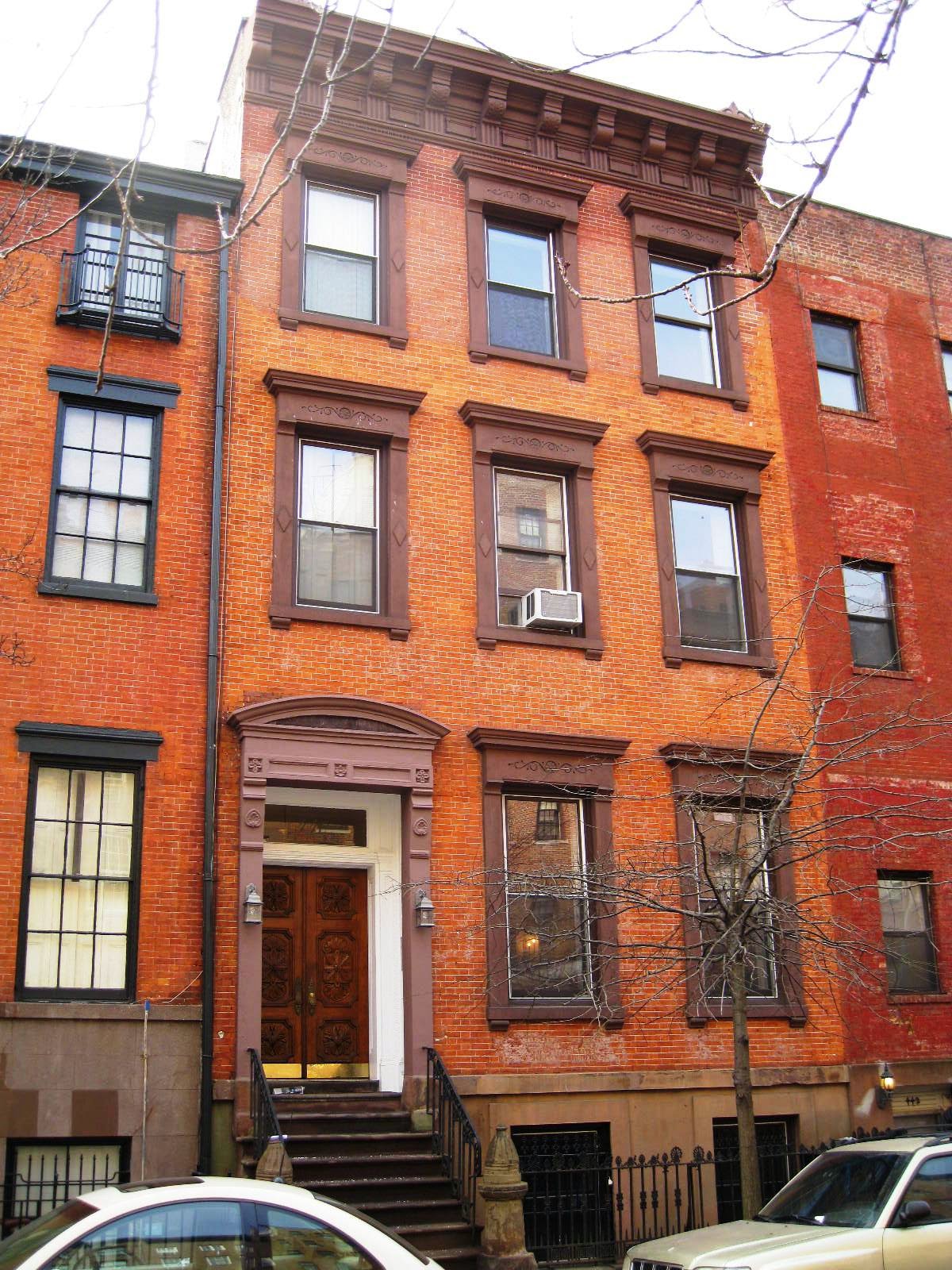 In 1818 Clement Clark Moore’s rural estate, Chelsea, was doomed.  Anticipating the continuing northward expansion of the city, The Commissioners’ Plan of 1811 had dissected Manhattan Island north of 14th Street into a grid of streets and avenues.   Within two decades Moore’s mansion and its bucolic land would see the rise of brick and brownstone homes, stone churches, and small commercial buildings.

Devoutly religious, Moore donated 66 tracts of land in 1818 for the Episcopal Church’s “general seminary,” established a year earlier.  The property engulfed the entire block from Ninth to Tenth Avenues, from 20th to 21st Streets.  The first building was completed in 1826, and nine years later a second building was begun.

Simultaneously, faculty member Rev. Dr. Samuel Hurlbeart Turner began construction of his home nearby at No. 440 West 22nd Street.  Like the Seminary building, it would be completed in 1836.  Turner’s high-end home was similar to the merchant class residences being constructed throughout the Chelsea neighborhood.  Designed in the rampantly popular Greek Revival style, it was faced in orange brick and sat above a brownstone English basement.   Three stories tall and 25-feet wide, it was an appropriate residence for a highly-regarded theologian.

Born in Philadelphia in January 1790, Turner had been teaching since 1818 when he was appointed professor of historic theology in the General Theological Seminary there.  When the Seminary relocated to New York City in 1821, Turner came as well.

Turner was much more than merely a teacher at the Seminary.  In 1824 the cumbersomely-titled book Discourses on the Internal Evidence of Christianity as Displayed in the Connexion of Natural and Revealed Religion, and the Doctrins of the Immortality of the Soul and a Future State mentioned that the “establishment of a General Theological Seminary in the city of New York [is] under the direction of the Rev. Dr. Samuel Turner, professor of historic theology.”

As the Chelsea neighborhood developed, the clergyman worked with Clement Moore and the Rev. Benjamin I. Height in establishing a chapel connected with the Seminary.  The chapel, organized in the summer of 1831, would grow into St. Peter’s Episcopal Church on West 20th Street.

The indefatigable Turner also took the post of professor of the Hebrew Language and Literature in Columbia College in 1830, and was President of the Chelsea Lyceum by 1842.  A prolific writer, he published a number of books, sermons and essays regarding theology and church principals.

Samuel Hulbeart Turner contracted typhoid fever in 1861.  On Saturday night, December 21, 1861, he died in the 22nd Street house at the age of 72.  The announcement in The New York Times of the death of the remarkable man was unremarkable.  Two sentences long, it included information on his Christmas Eve funeral.  “His friends, the clergy generally, and the Trustees of the Seminary, are invited to attend his funeral, at St. Peter’s Church, West 20th-st., on Tuesday, the 24th inst., at 1 o’clock P.M., without further invitation.”

By 1877 the 22nd Street house was home to Hollis G. DeBaun, a dealer in glues whose business was at No. 179 William Street.  A year later, Joseph A. O’Brien lived here.  He was employed by Charles S. Higgins & Co., a hugely successful soap manufacturer.  That year, in October, the company supplied 50,000 pounds of soap to the Department of Public Charities and Correction.

In 1882 the house received a major make-over.  Its Greek Revival style had been out of fashion for decades and the owners opted for a cheerier Queen Anne re-do.  A pressed metal cornice was added which included tiara-like ornaments at each end.  The windows were framed in metal surrounds decorated with incised decoration, and the entrance received an unusual and eye-catching enframement with a slightly arched pediment.   A set of remarkable double doors with carved panels replaced the originals.

Interestingly, the old Greek-motif ironwork was left in place; and while filings called for “interior renovations,” many of the Greek-inspired interior details were left, for the most part, intact.

In the 1880s and into the 1890s Moritz Simon’s family lived in the house.  Moritz and his wife, Henrietta, had two sons, Abraham and Solomon; both of whom were growing into young men.  Tragically, on Sunday July 24, 1887, Abraham died at just 21 years old.  His funeral was held in the house on July 26.  A much happier event was celebrated three years later when Solomon was graduated from New York City College.

While many of the wide homes in the neighborhood were converted to boarding houses around the turn of the century, No. 440 seems to have dodged that fate.  Mrs. M. H. Michaels lived here in the first years of the new century and she was drawn into an ugly law suit in 1904.  Anson Cassavoy sued William L. Pattison for defaming him in Mrs. Michaels’s house.  His attorney claimed that Pattison “at divers times between the 1st day of January, 1901, and the 1st day of January 1902…at the home of one Mrs. M. H. Michasels, No. 440 West Twenty-Second street” did “wickedly and maliciously speak of” Cassavoy.

According to court testimony, Pattison had told Mrs. Michaels that Cassavoy “had an adopted daughter, now the wife of one Edward Palmer, and that he was accustomed to go off and live with the said adopted daughter for periods of a week at a time, leaving his wife at home alone.”  Cassavoy accused Pattison, as well, of telling Mrs. Michaels that she “would be sorry she had ever met this plaintiff in the South.”  The attorney explained to the court that everyone who heard that utterance knew he meant that Cassavoy was “an unfit person for her to associate with or to continue upon her list of acquaintances.”

For tainting his “good name, fame, and credit,” Cassovoy wanted damages of $1,000.

For a few years thereafter, the house would see a relatively quick succession of residents.  In 1907 civil engineer Harry Clifford Ford moved in; and in 1909 Robert Kuehnert, Secretary of the Cottonwood Creek Copper Co., lived here.   That year, in October, Kuehnert had the president of the firm, Noah E. Barnes, arrested.  He charged that Barnes had embezzled $17,000 of company money in the year before.

While Barnes still sat in jail in January 1910 held on $15,000 bail, Robert Kuehnert replaced him as President of the copper firm.

In May 1916 Frederick Brown went on a sort of buying frenzy.  Simultaneously he purchased No. 440 West 22nd Street, No. 471 West 22nd Street and Nos. 420 and 422 West 23rd Street.  The New York Times reported that “the entire transaction” involved over a million dollars.

Brown obviously purchased the properties as investments and continued to lease No. 440 West 22nd Street as a private dwelling.  Eventually, in 1920, it was sold to Ernest M. Cokefair who, according to The New York Times, “will occupy it.”

Cokefair had founded Ernest M. Cokefair, Inc. around 1900.  The firm sold heating apparatus, most notably for the Magee Furnance Co.  While Cokefair may have announced that he would occupy No. 440; he did not necessarily mean he would do so as his residence.  He continued to live in Yonkers and established his company’s headquarters in the old house.

When Ernest Cokefair died two years later, his son Allen J. Cokefair continued to operate the business here.  Part of the building was leased to The Measure, a “journal of poetry.”  Cokefair seems to have rented apartments, as well.  The current owner discovered a marvelous metal sign in the basement "Raleigh Annex--Furnished Apartments & Studios."  In 1936 Dan Spidor was listed as living here in the Government’s Names and Addresses of the Voters for the Communist Party.

Allen J. Cokefair retained possession of the house until 1963.  On May 28 The New York Times  reported that he had sold "the vacant four-story building" to Mr. and Mrs. James McIntyre.  The article mentioned "they plan to alter and occupy."  The following year the house was converted to apartments—one on the basement and first floor levels, and two each on the upper floors.

Unfortunately, what followed was years of neglect and brutal treatment of what was left of any interior architectural elements.  When Michael Minick purchased the house in 1993 he faced a ponderous project of restoration.

According to Minick, the metal surrounds of the openings were "falling off."  A storm door covered the Queen Anne entrance doors which needed serious attention.  Inside, little remained of what had been Samuel Turner's elegant home.   A still-ongoing restoration was undertaken that included bringing the exterior elements back to pristine condition, piecing together fragments of Greek Revival pilasters and plasterwork to recreate the originals, and even cladding metal fire doors (required by fire laws because of the apartments) with wood to appear period-proper. 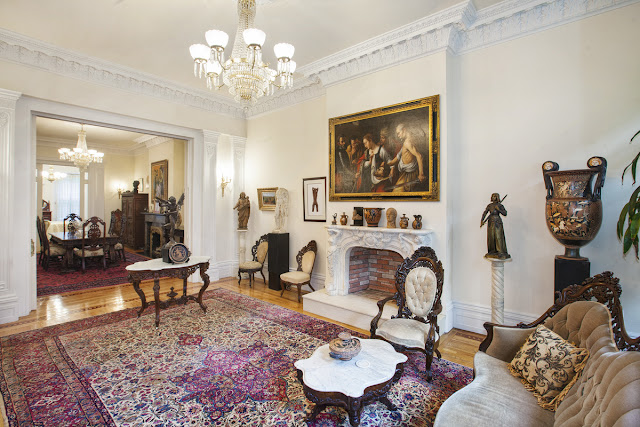 Minick's loving and tireless efforts have so far brought the lower floors back to their original glory.  And outside, the delightful Queen Anne facelift of 1882 has been happily preserved.

non-credited photographs by the author
Posted by Tom Miller at 3:00 AM