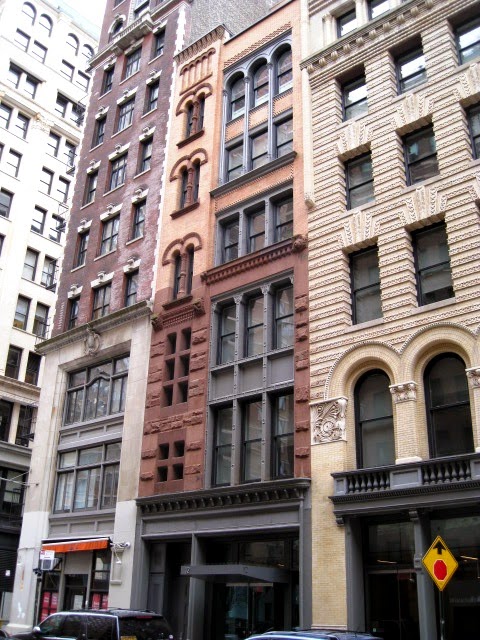 As the last decade of the 19th century dawned, the once fashionable block of Waverley Place saw the rapid demolition of brick-faced homes and the construction of modern loft buildings.  The garment and millinery districts were encroaching on the area and families like that of Henry Maillard and his wife, who lived at No. 12 Waverley Place, were fleeing northward.

Maillard, called by The New York Times “of chocolate and bonbon fame,” was owner of the candy company Henry, Maillard, Inc. and operated a confectionery store in the Fifth Avenue Hotel.  His sugary delicacies earned him a membership in the Chamber of Commerce as well as a substantial fortune.  In November 1890 he too would leave Waverley Place, selling the old 25-foot wide residence to Samuel and Henry Corn.  In reporting the sale The Real Estate Record & Builders’ Guide noted “A six-story warehouse will be erected on the lot.”

The Corns were among the most aggressive and active real estate developers in Manhattan at the time; and they often worked with Alfred Zucker in the designing of their modern loft structures.  The German-born architect was prolific, producing office buildings, lofts and department stores in New York City.  Now the developers simultaneously gave Zucker two more projects—an 8-story warehouse at Nos. 36 to 38 East 12th Street; and the 6-story structure at No. 12 Waverley Place.

On December 6, 1890 Zucker’s plans were completed for the “brick, stone and terra cotta warehouse…with all improvements, to cost $45,000,” according to The Record & Guide.   The cost would amount to about $1.2 million today.  If Samuel and Henry Corn originally intended their new building to be a “warehouse,” the plan did not survive long.   Instead Zucker designed a striking Romanesque loft and store of cast iron, brownstone and brick with terra cotta touches. 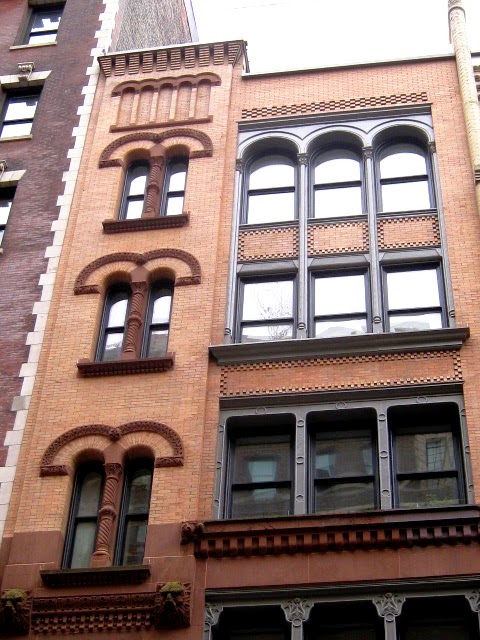 The wonderfully asymmetrical upper floors sat on a cast iron storefront base.  Zucker kept the visual weight of the structure low by his use of color and size of material.   Two floors of chunky stone above the street level gave way to lighter-colored brick.  Fantastic oversized eyebrows flared like wings above the paired arched openings of the top three floors.

But that would all have to wait until labor problems were solved.   On February 23, 1891 contractor K. N. Smith & Co. was given the general construction contract—covering all masonry, ironwork and carpentry.  Samuel and Henry Corn stipulated in the $32,700 contract that work had to be completed by November 15, 1891.

Arguments between the contractor and the owners and architect worsened when the deadline came and went.  Finally in December the Corns stopped issuing payments.  When the money stopped, so did the construction.  What followed was a standoff described by the Real Estate Record & Builders’ Guide as “amusing.”  The Corns, no doubt, found it much less so.

K. N. Smith & Co. refused to allow the owners entry into their own building.  “The owners employed a body of Pinkerton men and sought to take the building by force,” said The Guide a year later.    The irate Samuel and Henry Corn, who expected to see their building opened early in 1892, instead were tied up in court for a year and the uncompleted structure sat idle when Smith sued for payment.

On May 8, 1893 the Superior Court decided that the contractor had been guilty of “a great lack of diligence” and dismissed the case.

Finally No. 12 Waverley Place opened in towards the end of 1893 and among its first occupants were Samuel and Henry Corn themselves.  The tenant list showed a large representation from the millinery and garment trade, including Hirschberg & Co., a “headwear” factory.   Hirschberg took advantage of available child labor.  Of Hirschberg’s workforce of 32 males and 27 females, 9 of the women were under 21 years old and two of the boys were under 18 (one less than 14 years old).  An inspection by the State that year documented “hours of labor of minors, 53; hours of Saturday, 8.”

A firm that would put a young boy to work for 53 hours a week was not likely to look favorably on unionizing.  Not long after moving in, Hirschberg’s crew of capmakers was locked out “for being union men” and non-union men were hired to take their place.

But in the 1890s overworked laborers were beginning to stand up to autocratic factory owners.  It appears that Hirschberg & Co., now faced with a general walk-out, capitulated.  On July 4, 1894 The Evening World reported that the union capmakers “have resumed work at their own terms, and the non-union men, by whom they had been replaced, were discharged.”

Sixty-five year old fire insurance broker Julius Burrow took an office in the new building.  Born in Germany, he had suffered poor health for a decade.  In 1892 the family moved from Brooklyn to Montclair, New Jersey in hopes that a change of air and scenery would be beneficial.   Possibly because of his health, Burrow suffered business problems shortly after taking the new offices.  On January 9, 1894 The New York Times said rather bluntly, “Recently he met with business reverses, which rendered him temporarily insane.” 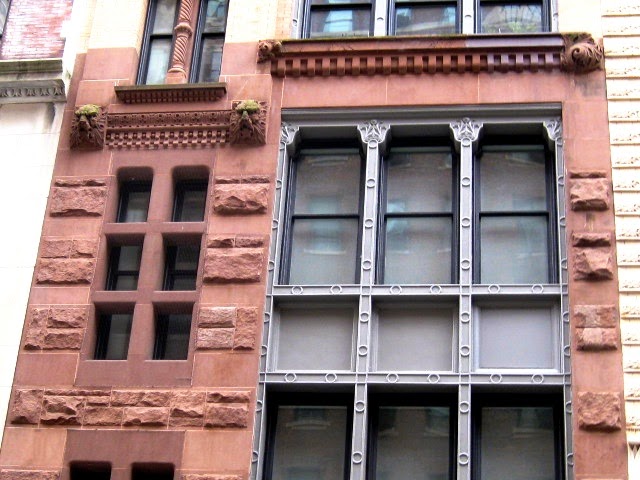 Neighbors and colleagues could never have known that the seemingly-wealthy Burrows was in financial trouble.  The Times said “The family are well known in Montclair society, but led a quiet life.”

Despite his bouts of “melancholy,” Burrows appeared in “exceptionally good spirits” on the night of January 8, 1894.  The family was still asleep at 6:00 the next morning when the report of a gunshot broke the silence.  The Sun reported “It was thought at first that burglars were in the house, and one of Mr. Burrow’s sons opened his window and discharged his revolver to arouse the neighbors.”

The family then realized that Julius Burrows was missing and the bathroom door was locked.  Julius Jr. climbed out on top of the bay windows and broke the bathroom window.  There on the floor was his father “stretched out dead upon the floor with a 22-calibre revolver by his side,” said The Evening World.

The New York Times reported “On the floor beside the suicide’s body was found a letter, unsealed, which was taken charge of by one of the sons.  On the envelope was written: ‘Let no stranger see this.’”

If, indeed, Julius Burrow had wanted “no stranger” to see the letter, he was confounded in death.  The Evening World spilled its contents to the world:

I have tried to tide over my business troubles by borrowing money.  I find to-day that I am unable to obtain any from my friends and so there is nothing for me to do but die.”

The building continued to house apparel firms, like Max Driesen who took space in February 1896; and Sidney Beller, “a well-to-do young cloak manufacturer,” as described by The Times.   About a year earlier Beller had married Sophie Manworth, “a very pretty Harlem maid.”  But, according to the newspaper on October 2, 1896, “disagreements arose between them.”

The upset Beller placed advertisements in all the morning newspapers on October 1 notifying all persons “that he would pay no bills hereafter contracted by his wife, Sophie Beller.“  He then marched off to the office of his lawyers, C. R. & C. U. Caruth.

As he discussed his marital problems with his attorney, suddenly Sophie walked in.  The sight of his lovely wife melted Beller’s heart.  The Times reported “Beller saw her, and, walking over to her, whispered: ‘Wife, forgive me; I was wrong.  Let us try again.’  A reconciliation was quickly effected, and last night they had a dinner together in its honor.”

One wonders if Mr. and Mrs. Beller appreciated their marital laundry being aired in the newspapers.

In the building at the same time was S. Brett & Sons, trousers manufacturers.  In July 1897 Lebowitz & Burros announced the establishment of its new firm in Cloaks and Furs.  The fledgling firm promised “we will manufacture the finest Cloaks and Tailor-made Suits.”  Another hat manufacturer, McChesney & Fischer, was another tenant at the time.

In May 1901 the building was offered for sale, advertised as a “bargain” by realtor E. D. Cordts.  Later that year, in December, the ground floor retail space was vacant.  A long-running advertisement offered “a nice large store and basement.”

In the meantime the upper floors continued to house garment firms.  In 1903 Cloaks and Furs reported that Seifert & Rosner, furriers, had moved in.  (Unfortunately, the firm filed for involuntary bankruptcy two years later.)   And in 1904 J. Cypres & Co. “manufacturers of seal caps and gloves” signed a lease.

Abramson & Werblin, another clothing manufacturer, started business on July 15, 1905.  The company was destined for bad luck.  On August 18 the following year they were “burnt out,” as reported by The Sun.  Although the company had $1,800 in insurance, the broker was slow in paying out.   On September 8, 1906 The Sun reported that “as they have not received their insurance money yet they could not meet their bills.  Yesterday a petition in bankruptcy was filed against them.”

The pre-World War I factories here included W. Stomel & Son, makers of “boys’ and juvenile clothing;” the Maxim Hat Works; and the Peruvian Panama Hat Co.  The latter company rode the wave of the popular Panama hat craze and in 1914 enlarged its offices and showrooms by taking the entire lower floor.  “In 1915 we added additional lofts at our premises at 12 Waverly Place in order to give us sufficient room for our manufactured advance orders and shipping department,” boasted an advertisement.  The following year Peruvian Panama Hat Co. bragged “we have surpassed all previous efforts, and have produced the largest and best line of Panamas ever offered to the trade.”

As the garment and millinery district moved north of 34th Street by mid century; a variety of new businesses and offices moved into the building.  In 1963 the former showroom space was converted to a “luncheonette” while the upper floors were still described in Department of Building documents as “factories.”

No. 12 was involved in a murder mystery in 1974.  Aspiring actress Karen Schlegel was 22 years old when she left Cresskill, New Jersey a year earlier.  She took an apartment at No. 9 Minetta Street, just four blocks from the Waverly Place building and landed a job as a program analyst for the McGraw-Hill Publishing Company.  The New York Times described her apartment as being “a block from the honkytonk atmosphere of Macdougal Street.”

On Tuesday, August 20, 1974 a pocketbook was found in a trashcan near City Hall.  It was given to police, who then called Karen’s parents.   They had not heard from her since Sunday and unsuccessfully tried to reach her at her apartment.

Later that night Karen Schlegel’s body was found on the roof of No. 12 Waverly Place.  She had been dead for about 24 hours.  “Bruises on the upper parts of the body initially prompted speculation that the victim had been murdered elsewhere and that the body was later dragged to the spot where neighbors found it,” said The Times.  An autopsy gave the cause of death as strangulation.  There was no evidence of sexual assault.

A New Jersey friend blamed New York City for her death.  “She was lovely, tall, blond and slim—she was very quiet and sweet, not a tramp or a girl on drugs.  Girls like that are lambs thrown to the wolves of New York.”

By the end of the first decade of the 21st century, the former factory building was taken over by New York University as its Center for Geonics and Systems Biology.  Converted to laboratories, conference rooms and offices; it was joined internally with Nos. 14 and 16 Waverly Place.

Not everything in the new Center was tedious science.  On December 15, 2010 the meeting of the Experimental Cuisine Collective took place in Room 108.  “It will cover the ‘science’ of chocolate chip cookies, including subjects like gluten formation, the behavior of chocolate, and chewy versus crispy,” reported the New York Times on December 7. 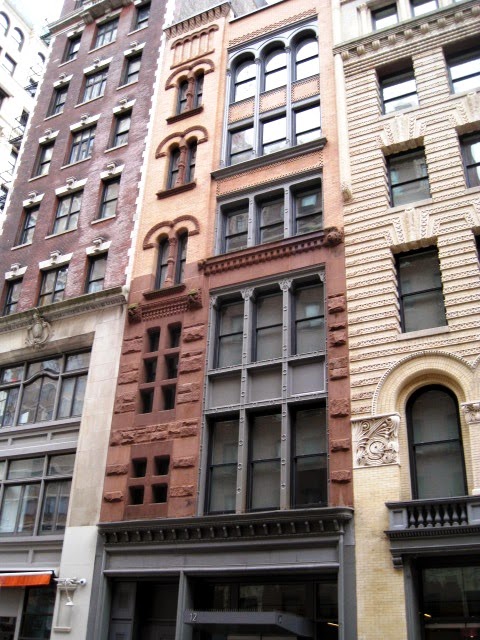 The University has tenderly maintained and restored Alfred Zucker’s wonderful 1892 façade.  Its quirky balanced off-balance design with its blend of materials, colors and shapes is a gem on an architecturally fascinating block.