In 1834, as commission merchant William Cooke erected his Greek Revival home at No. 141 West 4th Street, lavish mansions began ringing nearby Washington Square Park.   While the Cooke home would be less grand, it nevertheless reflected its owner’s financial and social status.

The orange brick was laid in Flemish bond; a costly carry-over from the high-end Federal style homes of a few years earlier.  Instead of brownstone trim, Cooke opted for white marble.  The stoop, with its interesting wing walls, sheltered the entrance to the English basement; the areaway of which was protected by especially handsome iron railings. Cooke’s house was two full stories tall, topped by an attic level with shorter windows; as typical of the architectural style.

The Cooke family lived on in their brick home drawing little undue attention over the decades.  That would briefly change--tragically so--in 1887.   Not far away, on Seventh Avenue was the Central Methodist Church, which was similar in appearance to the Washington Square M. E. Church.  Next door to Central Methodist lived 75-year old Henry Lockwood.

Lockwood came from an old and respected New York family.  His grandfather was a Colonel in the revolutionary army.  The New York Times mentioned “At the home of his brother, with whom he had lived, at 25 Seventh-avenue, there is an autograph letter from George Washington to his grandfather.”

Henry Lockwood began his career as a compositor and in 1853 traveled to Boston to learn the new process of electrotyping.  He returned to New York after six months and set up an electrotyping office in the American Bible Society.  Here he produced the first electrotyped copies of the Bible.

On Friday evening, December 30, 1887 the elderly man left his home to visit a friend on East 4th Street near the Bowery.  Coming home in the dark, he apparently became disoriented and mistook the Washington Square Church for the Central Methodist Church; and subsequently the Cooke house for his own.  At around 9:00 Cooke’s next door neighbor, Mrs. Julia Hart, discovered his body “on the marble door steps at 141 West Fourth Street,” as described by the American Printer and Lithographer.  The New York Times opined “He had evidently succumbed to heart failure, consequent upon old age.”

On Thursday, January 22, 1891, the 83-year old widow Caroline Pratt died in the house.  She had lived here just short of six decades.  Her funeral was held in the parlor the following Monday morning.

In the meantime, on December 27, 1865 the Wetmore Home for Fallen and Friendless Girls was opened on Houston Street.   The Home described its purpose as “To provide a home for friendless girls who have fallen, or who are in circumstances that may lead to their fall, from want of employment, from destitution, or from evil associations.”  Three years after Caroline Pratt’s death, her house was acquired by the Wetmore Home.  On April 29, 1894 The Sun wrote “It is called the Annex, and is a refuge for those girls who become mothers.  Girls in trouble often appeal to the Home for help.”

“Girls in trouble,” in 1894 meant pregnant, unwed girls and the stigma they carried was severe.  Here, however, “The mother is made to believe that there is still a chance for her to become a good woman, and that it is her duty to bring her child up to be upright.”  The Annex taught the girls a trade so when a place was found for her to live, she could support herself and her baby.

“The Annex is a cosey little house which has been put in thorough repair and furnished by generous donations,” said the newspaper.  “It has a large sunny nursery for the babies, with dormitory accommodations for ten women.  An experienced nurse is in charge and great pains are taken to teach these ignorant young mothers how to care properly for their children as well as to love them.”

The Annex took care of, on the average, eight mothers at a time.  By the time the article was written, “thirty have been sent to places in the country, most of whom have done well and are supporting themselves and their children.”

The Wetmore Home for Fallen and Friendless Girls continued to help unwed mothers here until 1902 when it sold the house for $13,500 to the Washington Square Methodist Episcopal Church for use as its parsonage.  It was most likely at this time that the attic was raised to a full floor, with a modillioned pressed metal cornice, and an up-to-date doorway replaced the original.

The church used the house as its parsonage for nearly a quarter of a century before leasing it in March 1926.  The renter promised to use it “for residence occupancy.”   If he, indeed, use it as a single family home; that situation would change within the decade.

In 1938 40-year old Joshua Nilo was renting here.  An unemployed barber from Pennsylvania, he was hiding from authorities.  Earlier, Republican leader Joseph Bruno had been imprisoned on murder charges “following the 1935 political parade ‘massacre’ of opponents of his organization,” described The New York Times.

Nilo helped in the convict’s escape from Pottsville Prison, then fled to New York City where he hid out.  His luck ran out on August 26, 1938 when police arrested him “as a fugitive from justice.”

The Washington Square Methodist Episcopal Church leased the house in September 1939 “to a tenant for altering and occupancy as a rooming house.”  Boarders in the once-refined home continued to be blue-collar workers, like 32-year old Anthony Denardo who lived here in 1945 and worked on the 40-foot water taxi, the Elkay.

The New York Times explained that the Elkay was “one of a number of small boats used to bring the crews of merchant ships and workmen ashore from anchorages in the bay.”  At 2:00 on the afternoon of July 3, 1945 there was an explosion in the engine compartment of the boat.  “Captain Ballette, who was forward at the wheel when the blast spread gasoline flames through other parts of the boat, was the only one of the fifteen persons aboard who escaped injury,” reported The Times.

The newspaper said “Most of the casualties were burned fighting the fire that followed the explosion, but some of them suffered shock and submersion also, when they jumped overboard to escape the fire.”   Seven of the passengers jumped overboard and were rescued by a Coast Guard patrol and two smaller nearby boats.  The most seriously injured was Anthony Denardo who “was said to have suffered serious burns.”

In 1947 the Sigma Phi Epsilon Fraternity, Inc. purchased No. 141 West 4th Street from the church.  After renovations the group announced “On November 1, New York Gamma occupied its house at 141 West 4th Street.  Arrangements had been made for the ‘quartering’ of the ‘advance party’ of eight men who moved in on that very first day.  We’ve collected and purchased a good deal of furniture and are halfway through redecoration.”

The house became a destination for out-of-town alumni.  The May 1950 issue of the Sigma Phil Epsilon Journal noted “The wonderful Sig Ep get-togethers that you remember are back again…interest-packed meetings, fun-filled socials, top guest speakers are waiting for you at New York Gamma House, 141 West 4th Street.”

Since 2006 the Malozzemoss House has operated from the old structure.  Run by AHRC, it provides treatment to persons with intellectual and developmental disabilities, and help for their families.  Only a subtle plaque on the façade hints that it is not a single family house. 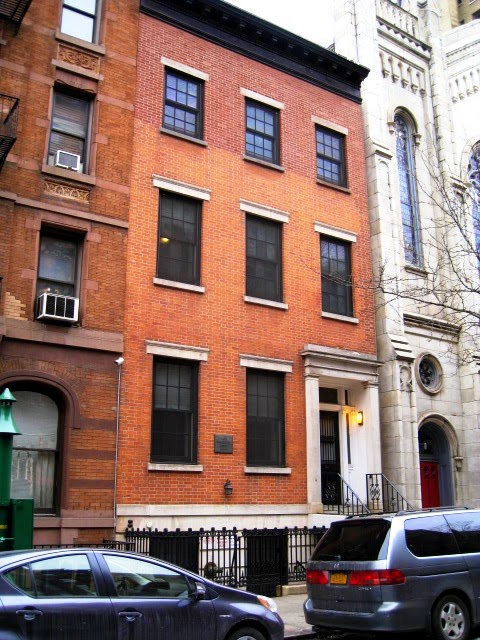 Well maintained, there is little change to the Cooke house since its turn of the century facelift.   With its colorful and varied history as the home of a well-to-do merchant family, a home for unwed mothers, a parsonage, and a frat house; it survives as a remarkable survivor of the earliest days of Washington Square development.

photographs taken by the author
Posted by Tom Miller at 3:45 AM