In 1839 three of society’s most influential sisters moved into adjoining houses at Nos. 732 through 736 Broadway.  The property had been owned by John Jacob Astor since 1804.  Although some sources say that Rebecca Jones purchased No. 732 with her own money; most likely it was wealthy banker John Mason who presented the three houses as gifts to his daughters.  Sarah Jones moved into No. 736, Rebecca was at No. 732, and Mary Mason Jones took the middle house at No. 734.

Mary Mason Jones was the reigning sovereign of New York society.  It would be many years before Caroline Astor eclipsed her.  Mary's brick-faced Broadway home would be the setting of glittering entertainments.  The three houses were inwardly connected.  Their ballrooms could be thrown open into a single impressive space for the grandest of balls.  Mary had married her father’s business partner, Isaac Jones, in 1819.  Both families traced their roots in America to the 17th century.

Decades later Mary’s niece, Edith Wharton, would immortalize her in the form of the overweight dowager Mrs. Manson Mignott in The Age of Innocence.”  According to Luther S. Harris in his book Around Washington Square, 25-year old George Templeton Strong noted an evening at the “ball of the season” in the Jones house on December 23, 1845.  Strong was unimpressed with the “very splendid affair” at which two of the ballrooms had been thrown open.  He especially was displeased with a new dance, the Polka, which he described as “a kind of insane Tartar jig performed to a disagreeable music of an uncivilized character.”

Strong then turned his attention to his hostess, calling Mary Mason Jones “fat but comely; indeed, there’s enough of her to supply a small settlement with wives.”  All in all, George Temple Strong walked out of the Jones mansion feeling “Modern civilization has achieved thus much, that people making fools of themselves do it in an ornamental way.”

But the relentless northward tide of commerce eventually threatened the refined Broadway neighborhood.  One by one Manhattan’s wealthiest citizens abandoned the area.   Mary Mason Jones would surprise all of them.  Just as the character in Wharton’s novel had done, Mary selected as the site of her new mansion the rocky, undeveloped land far to the north that her father had purchased in 1823.  In 1867 she began work on a block-long group of white marble, French-styled mansions on the unpaved Fifth Avenue from  57th to 58th Streets.  Mary Mason Jones would move to No. 1 East 57th Street and wait for society to come to her.

The Broadway residence would not survive much longer.  In 1872 it was demolished to make way for a commercial structure in what was now becoming New York’s garment district.  On Saturday, July 6, 1872 the Real Estate Record and Builders’ Guide reported that architects D. & J. Jardine had filed plans for “one five-story cast-iron store” for owners G. & H. Rosenblatt.

The Rosenblatt brothers had emigrated from Bavaria and established their business importing silk and ribbons.  As Mary Mason Jones could attest, mid-Victorian fashions depended greatly on both items.  By now both men were wealthy and their operation successful enough to afford its own building.

David and John Jardine produced a dignified neo-Grec building.  The use of cast iron facades had become rampantly popular within the past decade for its fire-resistant properties, its cost efficient production of intricate designs, and the quickness with which the massive pre-cast parts could be bolted onto the masonry.  Completed in 1873, No. 734 Broadway mimicked its stone counterparts with rusticated piers, engaged columns with ornate capitals, and segmentally-arched windows.

The Rosenblatt’s apparently operated only from the upper floors.  In 1875 the Real Estate Record and Builders’ Guide listed the James W. Meagher’s Hazzard & Co. restaurant here.  By 1884 Marcus Ward & Co.’s bookstore was here, creating competition for the E. A. Mac booksellers next door in No. 732.  Ward specialized in religious books and in 1884 introduced The “Bible Forget-Me-Nots” Series, described as “miniature text books by the Rev. J. R. MacDuff, D. D.”  An advertisement described “each tiny volume has an introduction and hymn by the author, and golden texts for every day.”

Founded by Marcus Ward in England nearly a century earlier, the firm’s American agent for years had been Alfred Ireland.  When it was incorporated 1883, Marcus Ward’s nephew, William Hardcastle Ward traveled to New York to set up the Broadway branch.   Ward was one of the corporation’s directors and among its largest stockholders.

On May 2, 1888 The Evening World reported “The business was carried on here in the large store at No. 734 Broadway under a lease which had been renewed from time to time and which expired yesterday.”  But suddenly Ward and Ireland found themselves the defendants in a lawsuit filed by their English parent company.  “The suit is one of a sensational nature, as it involves a quarrel among the partners of a great commercial house that has been in business for the best part of a century,” said The Evening World.

William Hardcastle Ward and Alfred Ireland had planned to relocate the bookstore.  They were shocked to find that the parent firm was attempting to take over the lease on 734 Broadway and carry on the Marcus Ward & Co. bookstore itself.  Now, with the lease expiring, the two men scrambled to renew it.   “They will remain on the premises rather than let them fall into the hands of the new firm.”

The English faction accused Ward and Ireland of “secret maneuvers.”  On May 1 Judge Van Brunt of the Supreme Court issued an injunction restraining the two men from “interfering with the plaintiffs at their place of business, No. 734 Broadway.”

The Evening World reported “The original lease does not contain a renewal clause.  A bitter contest is expected when the matter comes up in court, as it will in a day or two.” 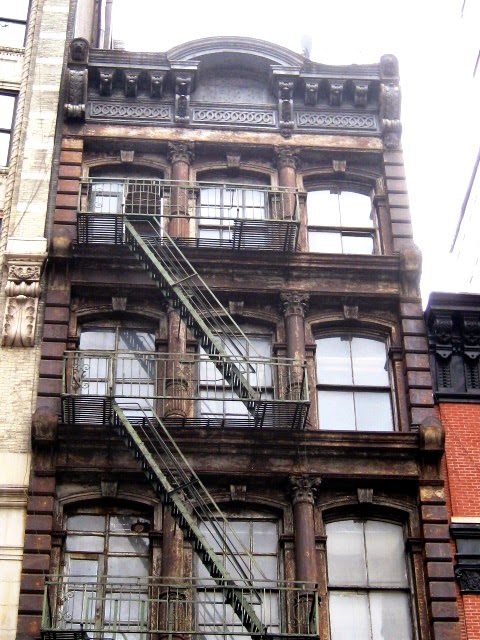 As the booksellers fought it out, apparel and millinery firms operated from the upper floors.  Louis Levy, “wholesale dealer in clothing,” was here at the time.  By 1895 hat maker Leman A. Allier had moved in.  And around this time furriers began to call No. 734 home.

By now garment workers were organizing into unions, to the disgruntlement of owners.  The cloak makers employed by Peller Brothers walked out in August 1897, complaining of low wages.  The New York Times reported on August 21 that they “returned to work yesterday, as the firm promised to pay union wages.”

The mix of tenants at the turn of the century included H. V. Allien “a dealer in military goods;” M. L. Cohen & Brother, who advertised for a “first-class salesman to handle our high grade furs as a side line” in 1904; and Gilroy & Bloomfield, cloak manufacturers.

At some point after 1910 the cast iron façade was “simplified,” although exact details of what that toning down encompassed seem to be lost.

The building continued to house clothing firms into the 1920s, including Blumberg Borland, even as the garment district moved past 34th Street.  Then in 1951 the Atlantic Luggage Manufacturing Company bought the building “for occupancy.”

The second half of the 20th century found No. 734 neglected and rusting.  An industrial fire escape zig-zagged down the face of the building.  By 1973 Samuel Weiser’s occupied by ground floor.  The New York Times said it “is known as the supermarket of the occult.  It is said to have the largest collection of books on mysticism, the occult and Eastern religions in the country, possibly in the world.”

Mysticism, the occult, and spiritualism blossomed in the 1970s as the hippie movement celebrated the coming Age of Aquarius.  Donald Weiser, son of the store’s founder, told a Times reporter in October 1976 that among of his biggest-selling subjects at the present were “pyramid power” items.

It was around this time that the upper floors were converted to apartments.  When the owner, Will Brand Corporation, disconnected electricity to the old elevator in 1981, the residents were forced to resort to the stairs.

With New York University expanding into the neighborhood around No. 734 Broadway, the retail stores reflected their new customers.  In 1979 Record City, a massive vinyl record store, replaced Samuel Weiser’s.  In 1985 Zoot moved in—a vintage clothing store that would remain for several years.

As the century drew to a close, the space became a Foot Locker store.  It was a scene of terror on August 29, 1996.  Around 8 p.m. on that Wednesday three men walked into the store, posing as customers.  They then pulled out guns and forced the manager to open the safe.  Locking the front door, they pushed eight people into a bathroom.

But one 18-year old girl was even less fortunate.  Before leaving with the cash from the safe, they forced the woman into another part of the shop where they raped and sodomized her.   She was later treated at Beth Israel Hospital.

In the meantime, residents upstairs had become tired of living in a walk-up and sued Will Brand Corporation in an effort to have elevator service restored.  In November 1997 work was still underway on the elevator.  While it was operational, none of its safety equipment had been restored and no light was installed in the cab yet.  Nevertheless, some of the residents took their chances and used the elevator rather than suffering the five flights of stairs.

One of them was 28-year old Heather McDonald, a NYU student.  Around 9:30 on Friday night, August 12, 1997 she stepped into what she believed to be the elevator car on the fifth floor.  Unable to see that the elevator was not at her floor, she stepped into the empty shaft, falling five floors.  One of her legs had to be amputated, the other was broken and she suffered a punctured lung.

Building inspectors noted that the owners had been cited for various violations concerning the elevator since March 1991.

In May 2014 the Landmarks Preservation Commission approved plans by restoration architects Beyer Blinder and Belle to restore the façade and add a two-story penthouse, invisible from the street.

Then nothing was done.

The beautiful, vacant and rusting structure was purchased by Thor Equities in February 2015; the same firm that had bought No. 736 Broadway for $11 million in November 2011.  Joseph Sitt, principal of Thor Equities remarked that he was undecided as to whether he would proceed with the proposed penthouse.

non-credited photographs taken by the author
many thanks to reader Grace Buchanan for suggesting this post
Posted by Tom Miller at 2:48 AM