It can be argued that no single architect shaped the face of the developing Upper West Side more than Clarence F. True.  Having worked in the office of esteemed architect Richard M. Upjohn; True struck out on his own in 1884.

At the time the Upper West Side was emerging as Manhattan’s newest residential frontier as rows of eccentric townhouses sprouted on the streets and hefty mansions appeared on the avenues.  Clarence True threw himself headlong into the frenzy and within a few years would be among the most prolific architects of the Upper West Side.  Fascinated with historic styles he often worked with developers to create long rows of harmonious homes that evoked romantic fantasies in stone and brick.

Six years after opening his office, True was approached by developer Duncan C. McKinlay who had purchased the majority of the block—16 building lots—on the south side of 73rd Street between West End Avenue and Riverside Drive.   For this ambitious project True expectedly turned to an historic style, Romanesque Revival.  And equally expectedly he gave it his own quixotic interpretation.

Completed in 1891 the homes were clad in rough-cut brownstone and featured turrets, towers, pointed gables and fanciful balconies.  The original row with its various roof treatments and bulging bays would have created a controlled yet diverse landscape of shapes and angles.

The two houses anchoring the western end of the row were mirror images of one another, and without a doubt, matched the two on the eastern end.   McKinlay spared no expense in targeting upper-class buyers.  Spandrel panels in the turrets were of carved stone, rather than terra cotta; and the cornices and brackets were also constructed of carved stone.   Never one to feel restrained by historic purity, True culminated the party wall between the two residences with a stepped gable that pierced the roof.   His unlikely treatment of the entrances included formal, fluted pilasters—shockingly in contrast to the medieval, castle-like tenor of the rest of the façade.  The homes were four stories tall over especially high English basements.   Most likely the side-by-side entrances shared a wide impressive stoop with a separating railing.

No. 306 became home to the Swiss Consul, Jacques Bertschmann, who preferred the name Jacob.  Born in Basel in 1829 he had arrived in New York around the outbreak of the Civil War.   He made his fortune representing many of the major French and Swiss marine insurance companies, and was an officer in the Equitable Gas-Light Company.  In 1883 he took the position of Swiss Consul.

Bertschmann’s responsibilities as Consul were highly ceremonial, as was the case on July 2, 1905 when he attended the celebration of the 500th anniversary of the battle of the Stoss.  All the Swiss societies in New York City gathered at Sulzer’s Harlem River Park.  The Sun reported “In the afternoon there were games by the Swiss Turn Verein, songs by the singing societies, followed by a parade around the grounds of all the societies, with a combined chorus singing ‘Noch ruh’n im weichen Morgenglanz.’  In the evening the Swiss children were seen in tableaux, which was followed by a pictorial show of ‘The Battle on the Stoss.’”

In 1912, one year short of three decades as Consul, Bertschmann retired.  He lived on in the 73rd Street house for another six years.   On Monday night, October 28, 1918 he died in house.  The former Consul’s son, Jean Jacques Bertschmann retained ownership of No. 306 until 1922.   He rented rooms as “apartments,” one of which was taken by wealthy Texan Thomas G. Bolles and his wife for their use when in New York. 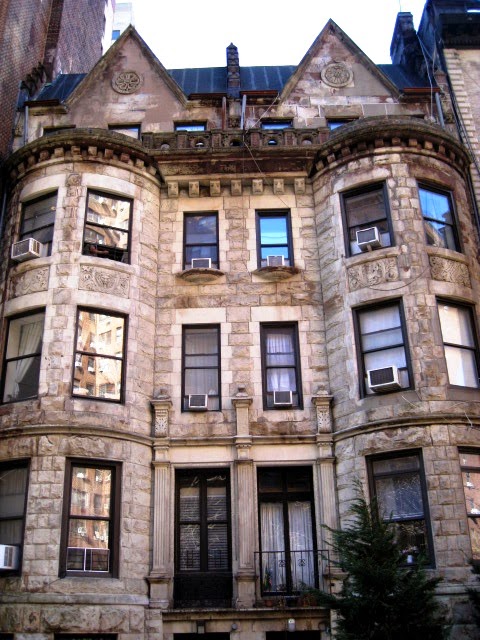 On July 2, 1922 the New-York Tribune reported that Bertschmann had sold No. 306 and “the new owner will occupy after extensive alterations.”  The “extensive alterations” meant dividing the mansion into actual apartments.   Two months later, while construction was still going on in the lower floors, Mrs. Bolles would have a scare.

Because her husband was traveling on business, she arranged for a friend to stay with her.  On Wednesday night, September 27, 1922, Mrs. Bolles hosted a dinner party for two couples at the Colony Restaurant at 61st Street and Madison Avenue.  Her temporary apartment-mate, Miss Goodwin, went off to the Hotel George Washington on West 72nd Street where she customarily dined.

While they were out burglars took advantage of the construction and entered.  “The house is an old-fashioned private dwelling and is being remodeled into apartments,” explained The New York Times.  “The front is entirely open.  The ground floor and the first floor are not occupied while the renovations are in progress.”

Miss Goodwin arrived home first, only to find the thieves still in the apartment.   “One slapped her on the side of the face and the other bowled her over, and she landed on the next turn of the stairs five or six steps below,” reported the newspaper.  Although “roughly handled,” she jumped up and ran after the fleeing crooks.  The residents of No. 308 heard her screams and saw two men running away.  “Miss Goodwin has since been under the care of a physician at the home of a friend,” reported The Times three days later.

The brazen burglars did not bother to jimmy the lock or pry open the door—they removed the entire doorframe and door as a unit.  Their heist netted them $15,000 worth of Mrs. Bolle’s jewelry.  But Miss Goodwin’s early return apparently saved much more.

“Asked specifically about the report of half a million dollars’ worth of jewelry overlooked, Mrs. Bolles said:  ‘I am not going to talk about that.  I don’t want to invite any more burglars to call on me.’”

Mrs. Bolles believed she knew the perpetrators.  “They have been watching me like hawks for several weeks,” she told reporters.  “They are people in high position.”

The new owners were architect John D. Boyd and his wife, Mary.   While living here, Boyd added to his resume by graduating from the School of Mines in 1899.   The following year he won the Gold Medal in the Architectural League of New York’s competition to design an “entrance Lodge and Gateway for a Country Estate of Moderate Size.”

In 1902 the Boyds leased the furnished house to Frank Howard Dodd and his wife, the former Martha Bliss Parker.   The highly-successful publisher had formed the firm of Dodd, Mead & Co. in 1870; established the literary journal The Bookman in 1895; published The New International Encyclopedia in 1903; and became president of the Riverside Association.  The wealthy couple were here only a year; after which Alexander Tison, former professor of law at the Tokyo Imperial University leased the house.

In 1920 Mary Boyd’s estate sold the house to sisters Mary L. and Emily L. Provost for $44,500.  In 1937 architect John Arthur Refrano converted it to “furnished rooms.”  In the 1940s both houses were renovated for two apartments per floor and it was most likely at this time that the stoops were removed.

Only Nos. 306 and 308 survive from Clarence True’s long row.  While their exteriors survive relatively intact (one would love to see the stoops and the original curved glass in the turret windows); the interiors have been cruelly mistreated.

non-credited photographs by the author
Posted by Tom Miller at 2:55 AM