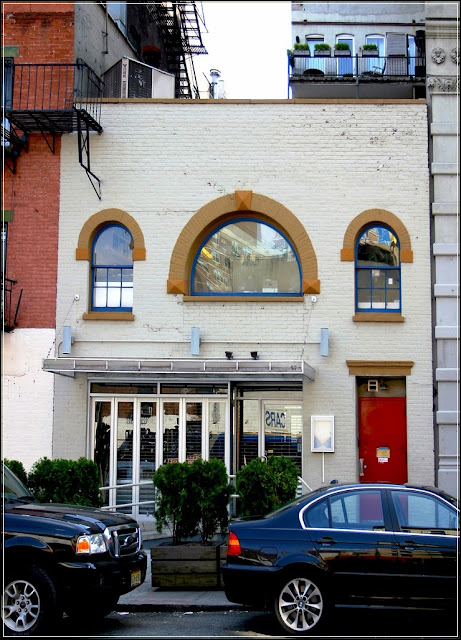 Around the time of the Civil War an ordinary stables was built at 57 Great Jones Street. It was the type of business that would characteristically board horses and rent small carriages to locals who could not afford or had no regular need for one of their own.


It was a common two story red brick structure with a modest cornice, two brick-arched windows flanking an arched hay loft opening, and a centered, double wooden door for carriage access. There was nothing exceptional about the building at 57 Great Jones Street.

In an early example of architectural recycling in a city known for tearing down its buildings, the stables had been converted to a saloon and dance hall by the turn of the century. Called “The Brighton,” it was owned by Charles Deveniude. On January 12, 1901 Deveniude’s saloon -- and his life -- nearly came to an end.

Deliverymen from a local brewery had packed the cellar with barrels of beer. One of the barrels fell against a gas jet, breaking it off and causing the cellar to fill with natural gas. When Deveniude descended with a lighted candle to check on the new inventory, the gas ignited.

According to The New York Times, “The report of the explosion was heard several blocks away. Some wooden platforms used to cover the grating in the sidewalk were hurled across the street, and a sheet of flame came up the stairway to the street.”  Deveniude was burned about the hands, face and shoulders and damage to the building was estimated at $500.

Deveniude made repairs and continued business, but by 1905 he had sold out to Paul A. Kelly who ran the saloon-dance hall as “Little Naples,” a notorious hangout for an Italian gang connected with Tammany Hall. Excise arrests, for selling alcohol beyond legal hours or on Sunday, were common and the saloon was “closely watched by the police” according to The Times.

The gangsters (who, although Italian, used Irish names), were known to police as dangerous, gun-toting, tight-lipped thugs. When, in November 1905, one of Paul Kelly’s lieutenant’s, John Ratta, was shot inside the saloon the only explanation investigators could garner from witnesses was “that he slipped and fell so hard on a bullet on the floor that it entered his flesh.” Ratta told police he would “live to carry a revolver, and…will settle the difficulty in his own way.”

Ratta was wrong. Two nights later he was murdered.

Kelly, whose real name was Paulo Antonio Vaccarelli, was later called by The New York Times “perhaps the most influential gangster in New York history.” His gang was highly involved in bringing “floaters” into the city from New Jersey and lodging them at The Mills House #1 on Bleecker Street. Floaters were illegal voters who were paid to vote for the Tammany candidates, flooding the ballot boxes.

A few days after the Ratta shooting, William E. Harrington was in Little Naples. Word had gotten out that he was poised to inform police about the floaters. Harrington never made it out of the saloon alive. Although he apparently fought valiantly, his body was riddled with high caliber bullets.

The Harrington murder trial was held four years later. Although Kelly was not implicated, he closed Little Naples and opened a Broadway district gambling house.

For decades 57 Jones Street saw minor business come and go. Then artist Andy Warhole purchased the building. After renovating it into an artist studio and living space, he rented it in 1983 to neo-expressionist artist Jean-Michel Basquiat. 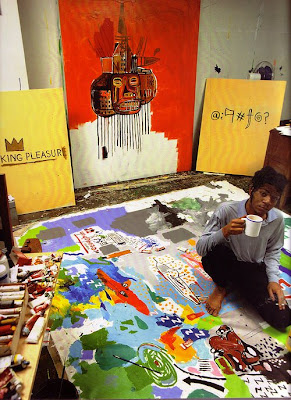 Basquiat, who once said that “the only artists who matter die young,” was, by 1988, using 100 bags of heroin a day, according to his own estimate. On August 12 of that year the artist was found by his girlfriend Kelle Inman, unconscious in his bedroom at 57 Great Jones Street.  By the time the ambulance arrived at Cabrini Medical Center, he was dead.  An autopsy reported that he died from “acute mixed drug intoxication (opiates-cocaine).” 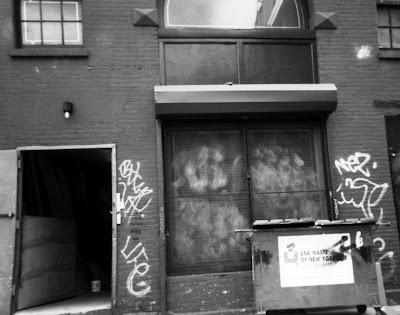 57 Great Jones Street in 2005 - Photo Centro Journal - CUNY
In 2009 57 Great Jones became home to Bohemian; a sleek, trendy Japanese restaurant hidden behind Japanese Premium Beef, a retail meat outlet. In the room where mobsters were murdered and an artist drugged himself to death, connoisseurs now pay $50 a pound for steaks.

57 Great Jones street is a totally unexceptional building with a remarkably exceptional history.
Posted by Tom Miller at 2:51 AM